Eugene, Oregon: We are in our motorhome! My favorite mode of travel. No 3-ounce shampoo bottle restrictions. No luggage allowance. No X-ray required to board. Just DT and Me in our own plane without wings. Love it. After countless plane trips in the past five weeks (yes, Leo is only 5 weeks old), we have learned it is so much more enjoyable to travel in our RV!

We jogged, threw a few things in the back of the Honda and headed out to our RV storage unit to Free the Beast! The Magna Peregrinus was so happy to be on the road again! 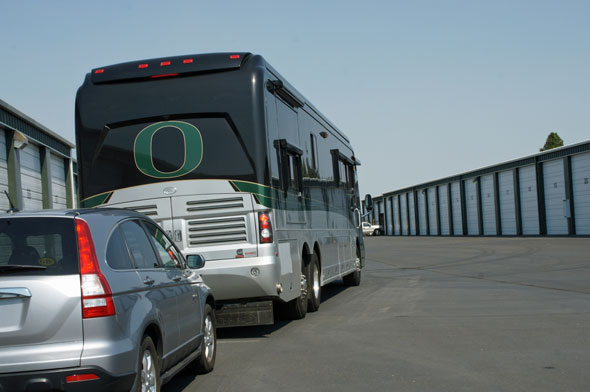 Yee Haw! Get me out of my corral and onto the highway! 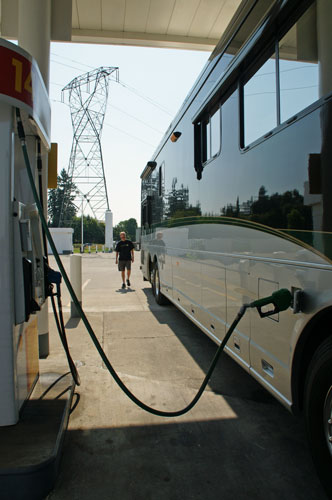 Except, could you please feed me first? I'm ever-so hungry. 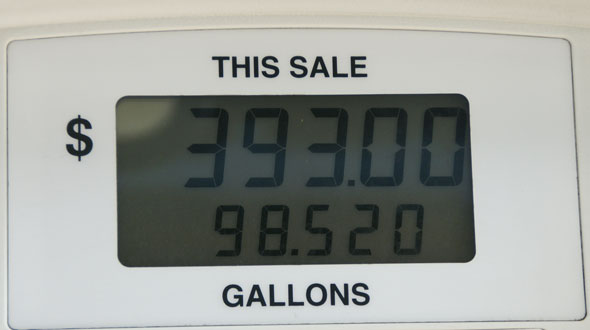 Maybe the Magna Peregrinus was not to happy to be on the road after all. Her dash air conditioning was not working, and it was 95° outside. Cruel.

No matter. We didn't go far. Just a few miles south of Salem, traffic came to a complete stop! 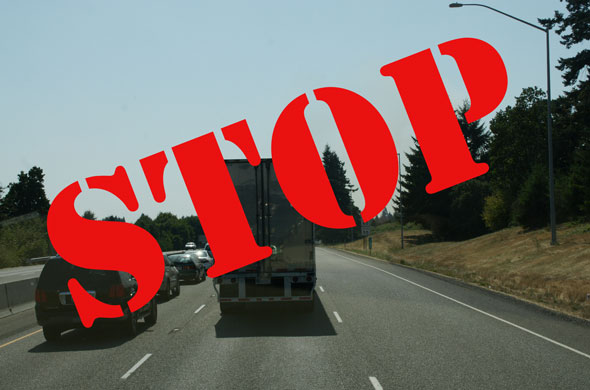 And by "stop", I mean DT slamming on the brakes and the semi in front us swerving out into the right lane to avoid rear-ending the car he was following! We could not figure out why traffic was at a stand-still on the southbound lane of Interstate 5. 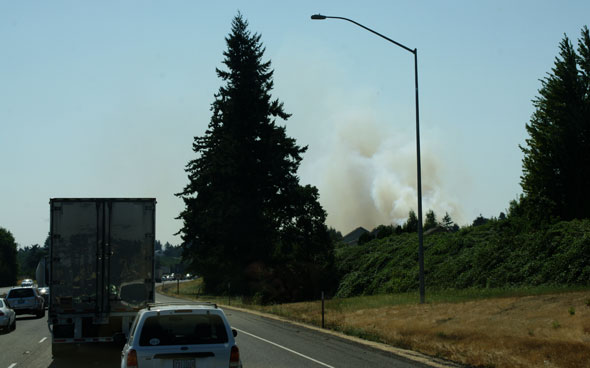 Until we saw the smoke.

Turns out a grass fire had started on the west (right, south-bound) side of I-5, then jumped the freeway - closing north and south-bound lanes. We were parked on the freeway for nearly one hour. Everyone left their cars after a while, chatting, and passing-on any news from their car radios. The bushes on the right side of the freeway were loaded with wild blackberries, so many of our fellow stranded travelers went berry picking! Hey, you never know... maybe we were going to be there for hours. 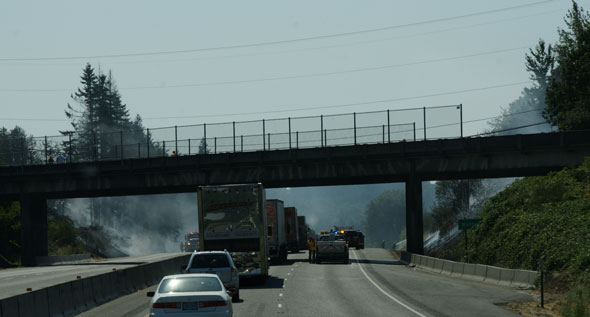 We later learned the north-bound lane had been diverted to a bypass and finally the state troopers allowed the south-bound vehicles to proceed - in one lane - and we could see the extent of the burn. 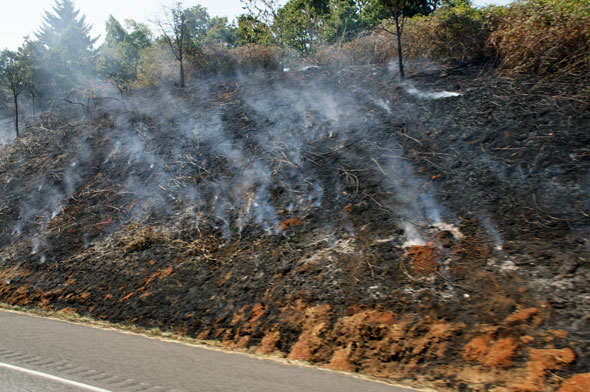 No one was injured and later the fire marshal reported finding discarded cigarettes on the side of the road - but the fire is still under investigation. 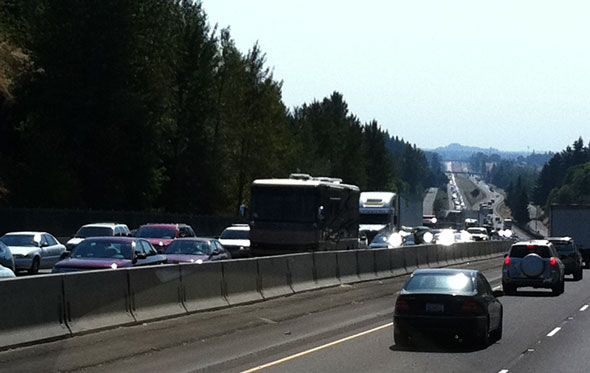 Excuse this terrible photograph - snapped through the RV windscreen with my cell phone... but the traffic was backed-up to practically California!

The final 50 miles of our drive were smooth flying sailing, and we checked-into our usual campsite in Eugene. A few moments later, DT was off to a meeting at the University, our fantabulous RV tech, Brian Van de Walker (541.514.9000) was at our bus to look at our air conditioning (apparently we need freon), a satellite internet tech in Colorado was uploading software to our modem (via the satellite, by the way) and Captain Jim & Mary stopped by for cocktails.

Much later, Dave and I went to one of our favorite restaurants in Eugene, Marché, for yet another wonderful meal and, yes, I had steak frites. Why? Not sure. We have eaten vegan since arriving home from our deep-fried-Texas-food-fest. Steak Frites is just a little item on their bar menu - a small portion and so delicious and the price is right. 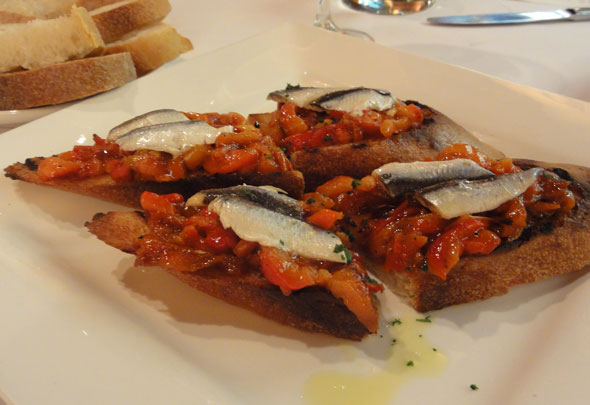 We split a roasted red pepper tartine with pickled sardines on grilled baguette as an appetizer. Delicious. 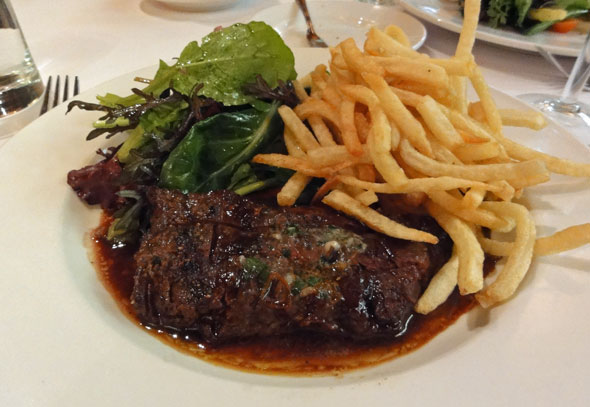 Three slices of flat-iron steak... not sure I ran enough miles this morning to counter-act the calories of even this little steak... but it sure was delicious.

Tomorrow the Ducks face the University of Nevada Wolfpack at 12:30 pacific. The game will be broadcast on Fox Sports - as the "Game of the Week".

Get some chicken wings and brewskis and check that out!

Until my next update, I remain, your extinguished correspondent.
« Home Again… for a few days A Different Team »