Los Angeles, California: I failed to mention that DT spent all last week in Oregon. He flew home on Sunday (February 23) for track & field meetings in Eugene and Portland, and left me in Indio alone to shake martinis and check-off a lot of items on my ever-growing TO DO list. He returned to me Thursday evening with gifts: 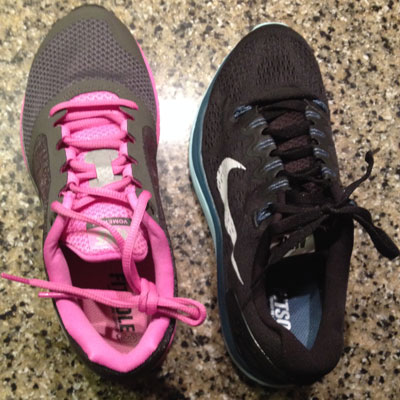 Two new pair of running shoes! I am so excited to give them a try. The tread on my old running shoes are completely smooth. Thank you, honey!

DT didn't have much time to rest or recover or even unpack - Friday morning we headed to Los Angeles in the Honda. 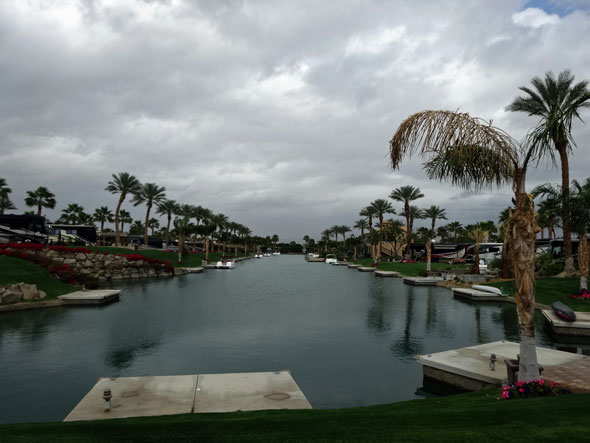 As you probably know, Southern California is getting a lot of weather this weekend. The area is desperate for moisture, so I am happy for the rain... day-after-day of 82 degree sunshine gets so boring.

Our drive from Indio to Lisa & Lenny's house usually takes two hours. Yesterday, due to the terrible weather and several accidents, it took four hours. 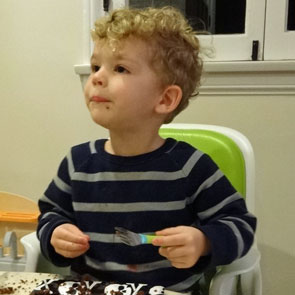 As horrible as that may seem, it was a far better course than those waiting on the side of the interstate for tow trucks. Be careful out there! We arrived to find a special little fellow waiting for us in the window. Lisa served Chinese food for dinner - including scallion pancakes (like a fried flat bread - Lisa especially loved scallion pancakes when she was a little girl living in Taiwan). I baked a chocolate cake for Leo Friday morning before we left Indio and he had a piece after dinner and proclaimed it "good".

Everyone is a critic.

I would like to say we enjoyed a quiet evening at home with the kids, but the sky was rocking and rolling with thunder, lightning and constant windy downpours. It rained more than two inches overnight.

We came to Los Angeles for two reasons - to take Lisa, Lenny and Leo to the Duck v USC game Saturday afternoon and to watch Leo while his parents volunteered at a fundraiser Saturday night. 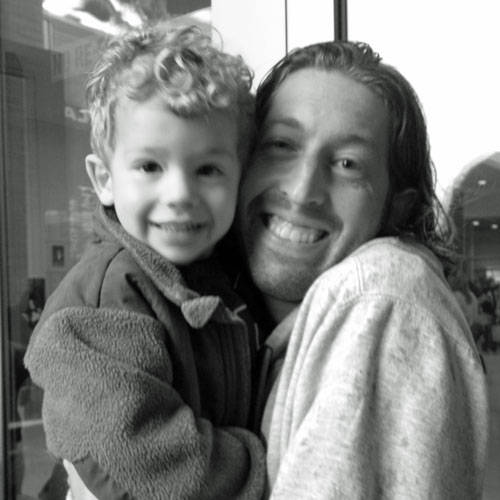 The basketball game started at 1p in the Galen Arena on the campus of USC. We were all quite curious as to how a 2.5 year old would handle two hours in a seat at a basketball game. I assumed Leo would sit still for about five minutes, scope-out the situation and spend the rest of the game running around and around the concourse. 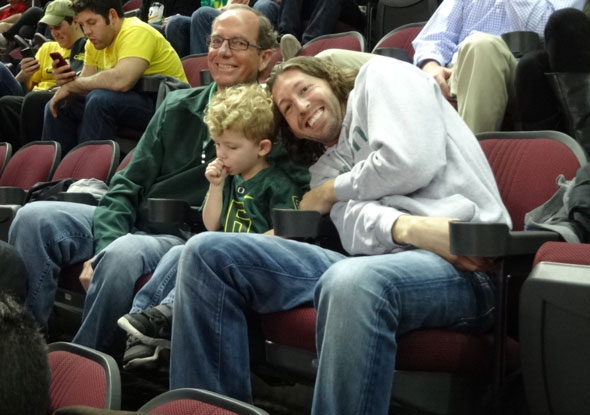 Leo, wearing his Duck football jersey at the basketball game, with DT and Lenny

I was wrong. Leo sat in his seat and followed the players up and down the court. He cheered and clapped, sucked his thumb and moved from lap to lap, but he never left our row or wanted to run around. Best Behaved Boy! 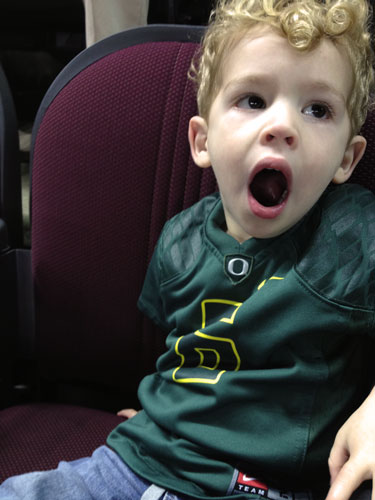 Doesn't mean the little fan didn't yawn a bit towards the end of the contest. Doesn't mean he didn't nod-off. The Ducks won the game and as we left the arena, Leo noticed the USC Trojan mascot enter the locker room and slip-off his "head". The rest of the night all we heard about was "that guy" "going home" "taking off his costume".

Lisa and Lenny went to their fundraiser and Bubba and I had dinner with Leo, gave him a bath and put him to bed. He was exhausted... but what song did Leo want his Bubbe to sing before he fell asleep? Rock-a-Bye Baby? Nope.