Only in Los Angeles

Los Angeles, California: A beautiful sunny day in El Lay... or so I assumed. The air quality is so awful - who really ever knows? Lisa had arranged a brunch to celebrate her Father's birthday at DT favorite breakfast spot in town, Dusty's. We were joined by Lenny (Lisa's boyfriend), Angela, Gina, Paula (Lisa's sorority sister) and Paula's boyfriend, Marlin. Fun times. Delish delights. Mimosas were consumed. Happy Birthday, DT.

In the afternoon, Lisa took DT and I out to The Grove shopping center. This place is unreal - all the finest shops arranged in a "village" - ala Disney Main Street, complete with cobblestones, a town square, fountains, outdoor cafes and kiosks. 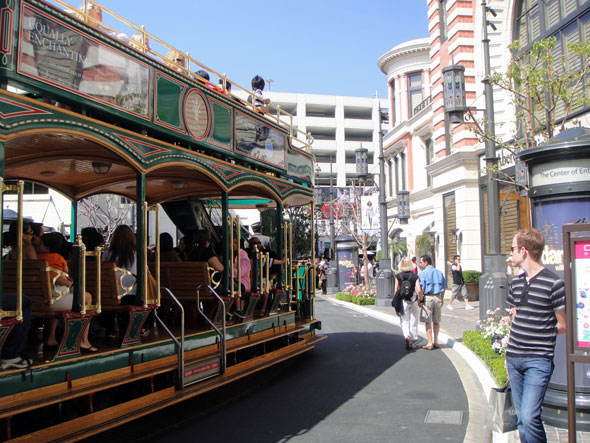 Even though the shopping center is just a few blocks long, there is a street car to carry you from one end to the other. Apparently, in Los Angeles, no one walks. Anywhere. Ever. 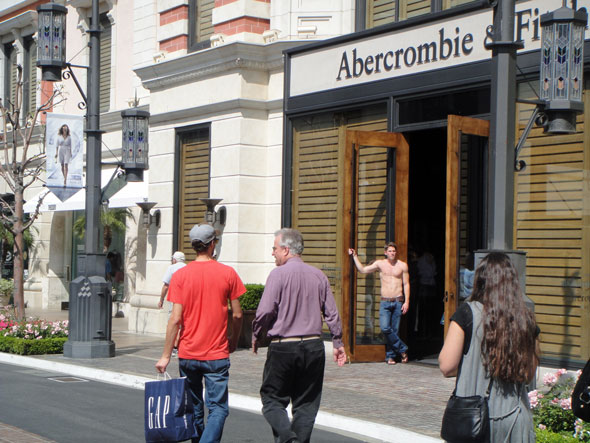 Yep. That is a half-naked totally-ripped dude hanging out in front of Abercrombie. He is paid to stand there and show-off his six pack abs and look hot. This is a job? Lisa said they often have two hot ripped guys standing in front of the store!

Only in Los Angeles. 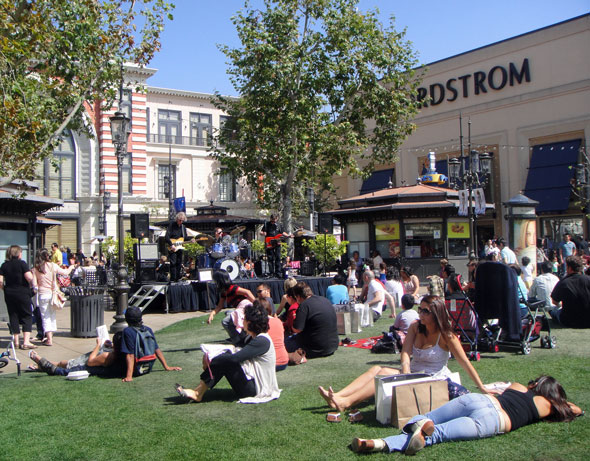 The Grove also provides live music in the "park" to entertain the shoppers. I am not kidding you - the lawn in fake. Artificial grass.

Only in Los Angeles.

After a rest back at the hotel, it was time for another gourmet repast - this time at Katsuya. Dave's birthday just gets better and better! Lisa, Lenny and Angela joined us as we enjoyed edamame, grilled eel, yellowtail sashimi with jalapeno, spicy albacore sashimi with crispy onion, cucumber roll, panko crusted chicken with vegetables, miso marinated black cod... plus, I am sure there is something else I am forgetting. Katsuya is simply one of the best sushi restaurants in America.

Lisa's firm is handling the publicity for Conan O'Brien's "Legally Prohibited from being Funny on Television" tour, so she left Katsuya early to head over to the show. We enjoyed another cocktail, then headed out to Universal City to watch Mr. O'Brien's live act. Lisa remained back-stage, but she procured great seats for us and we all really liked Team Coco. 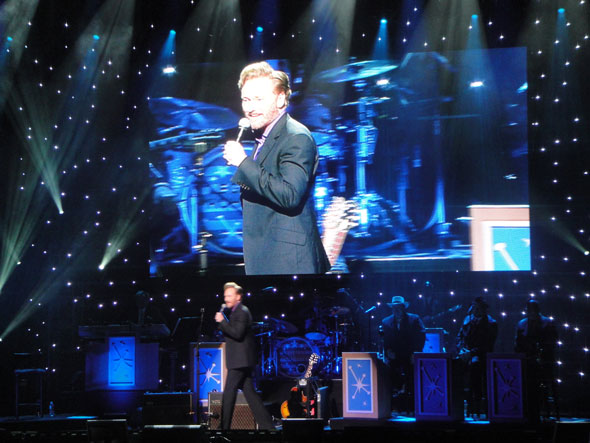 The show was a little like O'Brien's late night shows - an opening monologue, a few jokes, a few skits, Andy Richter, the cigar-smoking dog and Conan sang a few songs. Several celebrities made brief appearances, including Sarah Silverman and Jonah Hill. One of the highlights was Jim Carrey appearing in a super-hero costume - Conan donned a Superman cape - and they sang "Superman" (by Five For Fighting) together. 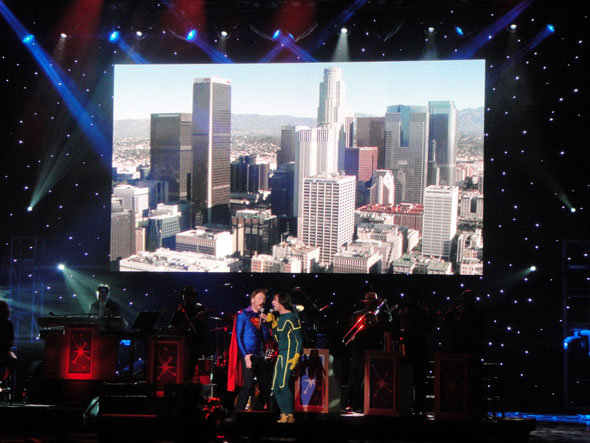 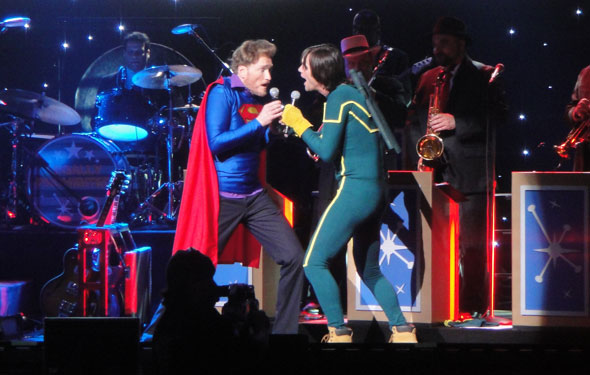 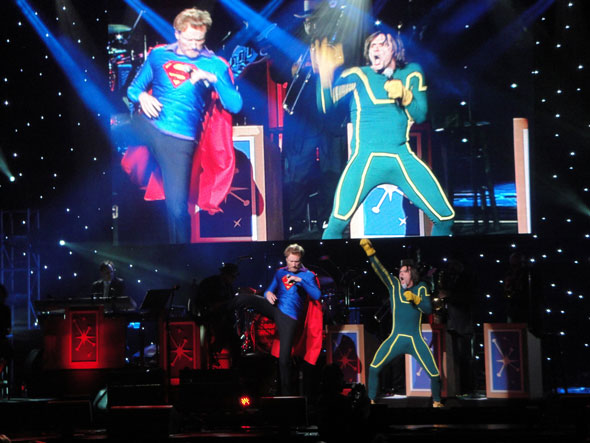 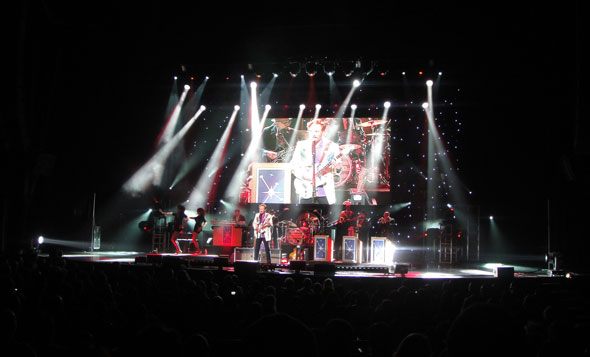 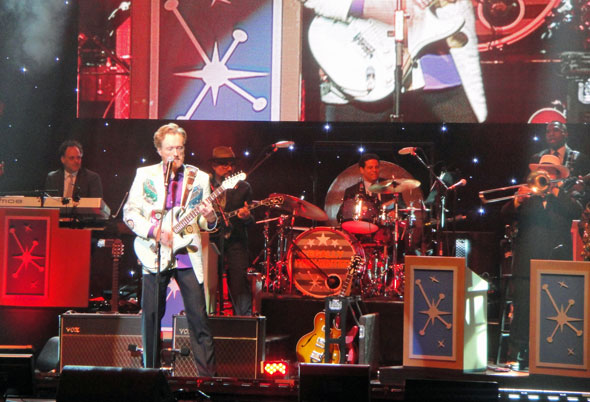 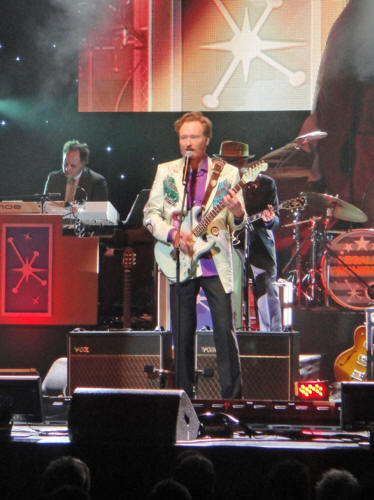 Until my next update, I remain, your "only in Los Angeles" correspondent.

« Hanging out with Reese in Los Angeles Back to Bakersfield »