Los Angeles, California: This column was scheduled for yesterday. Lisa has a long list of chores to be completed before Baby Girl arrives in August, so we agreed to fly to Los Angeles to help. But - just as we were heading to Portland International Airport Sunday morning - I received a text message from the airline stating our flight had been cancelled. Cancelled. No explanation. No re-routing. Nothing but a phone number to call. The call-center agent never did share exactly the reason the plane was not flying to Los Angeles, and the only flights still available on Sunday required a stop-over in such convenient cities as Seattle or Salt Lake (no, thank you). The agent then suggested we could take the same flight we had chosen for Sunday, on Monday - and threw in a voucher and extra frequent-flyer miles for our trouble.

So Sunday was strange. The fridge was already depleted in anticipation of time away... so we met Mary & Steve at a local sports bar to watch the futbol. 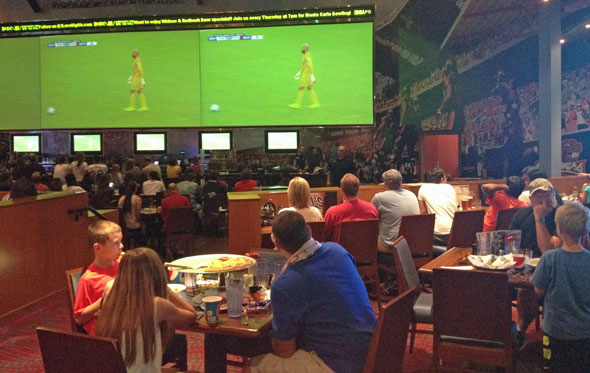 I woke at 6a today to find another FLIGHT CANCELED text message, and then another text message with notification we had been rescheduled on another non-stop leaving PDX at the same time. All of this information went to my iPhone. I checked-in on my phone and my boarding pass is on my phone. Why do planes even have pilots? Isn't there some-sort of aviator app I could just use?

After boarding a Bombardier Q400 we learned our regular commuter jet was in the shop. It took only 30 minutes longer in this turboprop, and the landing was a whollottafun (not). 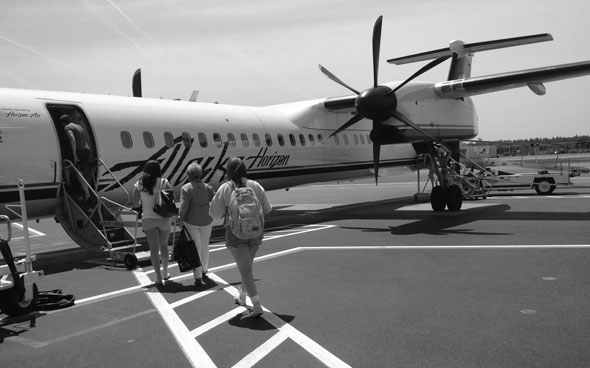 Our favorite Little Dude was actually waiting inside the baggage claim area of the Burbank airport. He was so excited to see his Grandpa! Leo is on his one-week summer vacation from his preschool, so we will be able to spend a lot of time with our favorite grandson this week. 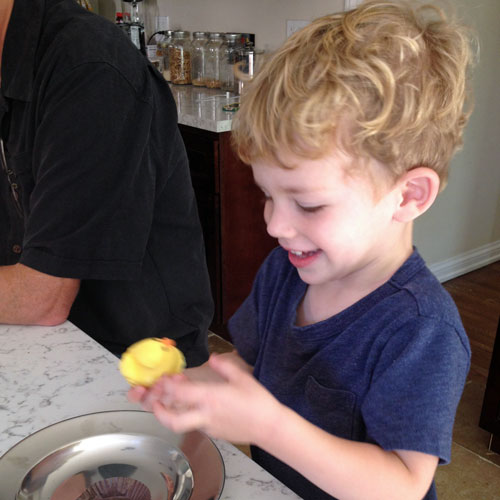 We brought him two little Duck petit fours, smuggled from a party we attended during the NCAA's last week in Eugene - frozen until we left the house this morning. Leo was enchanted with his little treats. (And, yes, he did break-out singing the Oregon Fight Song.) 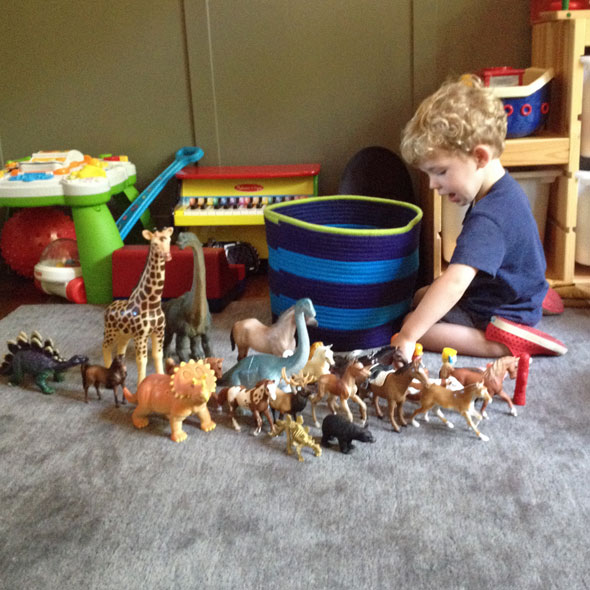 Leo now has an extensive collection of plastic animals. It started with horses, then we sent him plastic figures of the animals we had spotted in Yellowstone National Park last month, then he asked for dinosaurs - plus he already had a lot of African animals and barnyard animals. His playroom is ready for a flood of biblical proportions. 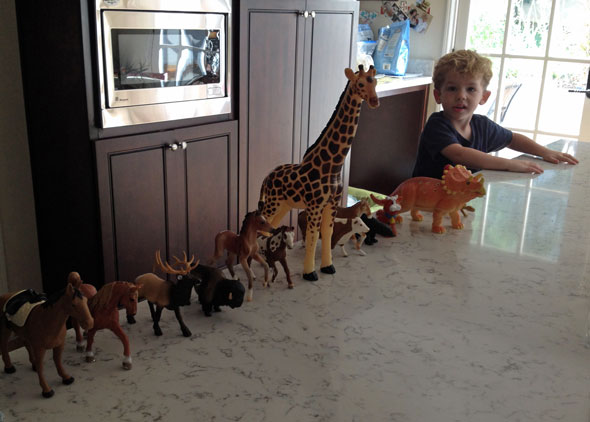 Leo loves to line his critters up in a row, or in a circle, or in a group. The figurines above are all attending a birthday party for one of the horses. Obviously.

After the birthday party, the animals washed the "dishes" used to serve the "cake". I asked Lisa about Leo's new-found interest/knowledge in dish washing and she explained last week was "restaurant month" at his school. The toddlers sat at tables, "read" menus, ordered "food", played servers and cooks and even set-up a dish washing station - someone washed, someone rinsed, someone dried and someone put-away! Cooperation. Lisa thought Leo really enjoyed "playing restaurant" and cracked-up when Leo asked the waiter for a menu at their local breakfast joint... at a cafe they visit often enough the waiter doesn't even ask what Leo wants, just brings him a pancake.

Another reason for our trip south was to attend an adult, child & infant CPR/choking class with Lenny and Lisa. If you have little ones in your house, I suggest you phone your local Red Cross or community center and sign up for this important class as well. Hopefully we will never need to use our new-found knowledge, but at least we are prepared.

The class was held in a church gymnasium and it just so happens that on Monday evenings the church parking lot is busy with several local gourmet food trucks and is a favorite gathering spot for locals and their kids. Lisa figured we could have dinner at one of the food trucks and then go to class. 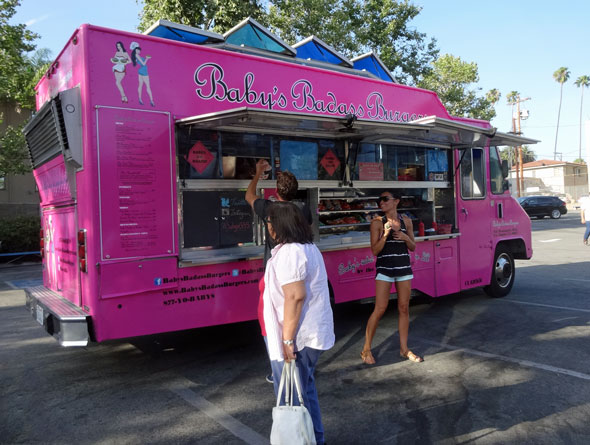 Babe's Badass Burgers in a Catholic church parking lot. What is the world coming to? 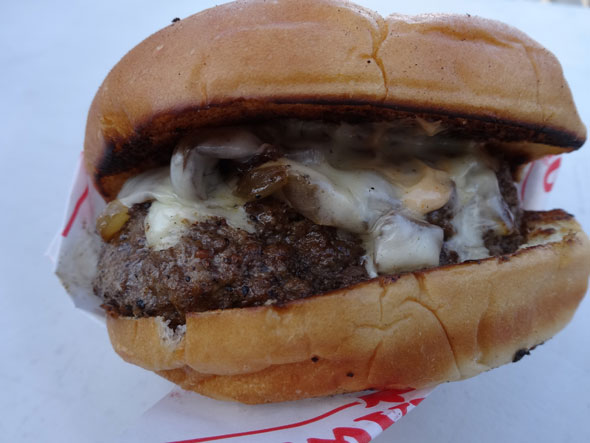 Our instructor was good. Blunt and to the point. We learned a lot in our class about CPR, choking and how to use a defibrillator - and the teacher scared the you-know-what out of us describing what is going to happen when THE BIG ONE hits Los Angeles. Get your earthquake, tornado, flood... or whatever emergency preparedness kits ready, people. This is not a drill. 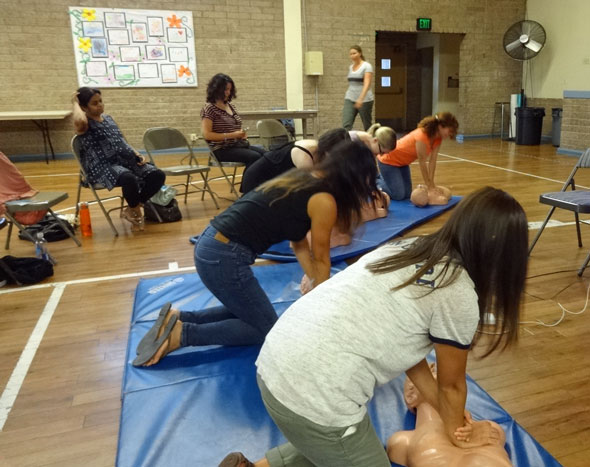 No photos of my family at the class. Apparently a seven-month-along lady resuscitating a plastic torso is not an appealing image.

Until my next update, I remain, your prepared correspondent.
« NEW RECIPE: Angry Pasta On Task »