On the road again…

Where have we been? Many of our readers have emailed asking why we stayed home this year. "Where are your Winter & Spring 2008 Postcards?"

DT volunteered to help organize the US Olympic Track & Field Trials. The trials were held in Eugene, Oregon - June 27-July 6. However, a ten-day track meet takes nearly two years to produce, so we parked our motorhome at the Premier RV Resorts in Eugene and DT used it as his office/bachelor pad four days a week and commuted to our home near Portland, Oregon for long weekends... for over a year! (Another great reason to own a RV!)

It was worth missing a winter traveling. Track Town USA (some people call it Eugene, Oregon) is back, and the US is sending a fabulous team of athletes to Beijing. However, now that things are wrapping-up (though planning has already started for the 2012 Olympic Trials, also to be held in Eugene) we are making plans for our RV future. 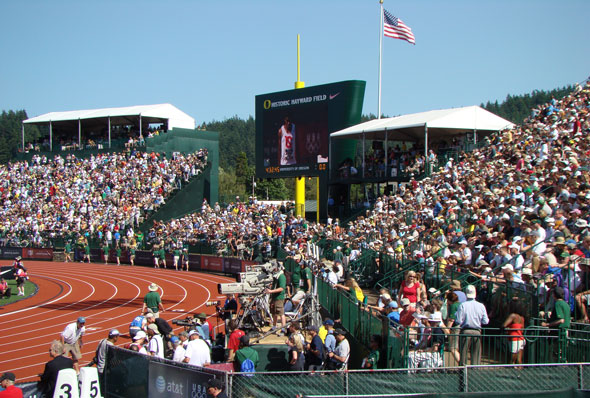 We have ordered a new motorhome from Country Coach and it will be delivered in late August September October November. We are very excited about our new motorhome and are enjoying the design and building process. Until then, we had a few weeks to enjoy the beauty of Oregon, so we are on the road - touring coast, valley and mountain. We hope you enjoy our tour.