I don't know if y'all remember, but three (or four) years ago, I chucked the hodge-podge mess of spice jars accumulated in the pantry, organized my treasures and placed them all in very cool metal containers. Then I placed adhesive flexible magnets to the bottom and hung them in glorious rows on a sheet of metal. 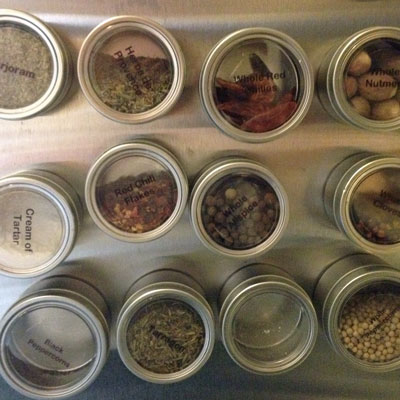 The pretty tins made it easy to measure herbs and spices, and also made an easy chore of refilling my little tubular spice rack we keep in the motorhome: 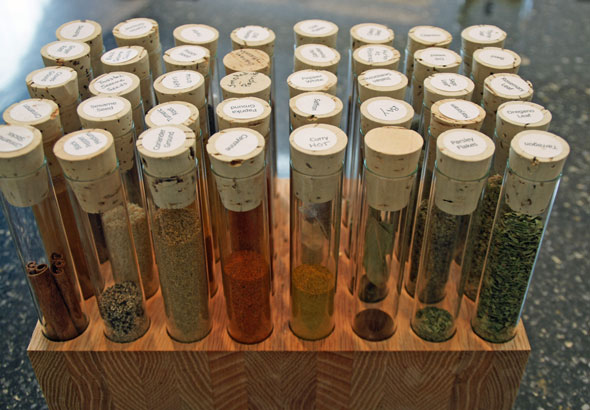 And the metal jars worked very well... until they didn't. It is partially my fault. I should have realized some spices just should not come in contact with the polystyrol plastic lid, and the lids to the tins were just so very difficult to open after a while. I had to use a butter knife to pry-off the lids (I'm old!). Enough times, the spice would go flying all over the kitchen when the lid finally popped off. Annoying. It was time for a change, but I was not willing to give-back the pantry space previously devoted to my nearly-SIXTY jars of spices and herbs. I wanted to use the metal sheet already on the pantry wall, meaning any new containers would also require magnetic bottoms.

Why can't I just keep spices in the jars they come in? Life would be so much easier! Truth is, these days I purchase nearly all my spices a little bit at a time, from the organic bulk-bin section at New Seasons Market.

The brain-storming began. Google. Pinterest. Etsy. Amazon. Local hardware store. My first choice was, of course, glass. But glass jars are heavy and would need a more powerful magnet than the self-adhesive flat rubbery magnets I used previously on the light-weight tins. I found 4 ounce Mason jars on sale - $9 per dozen. I called a magnet company (did you know there are companies that do nothing except make/sell magnets - who knew?) for advice. Found cute labels on etsy and went to work. 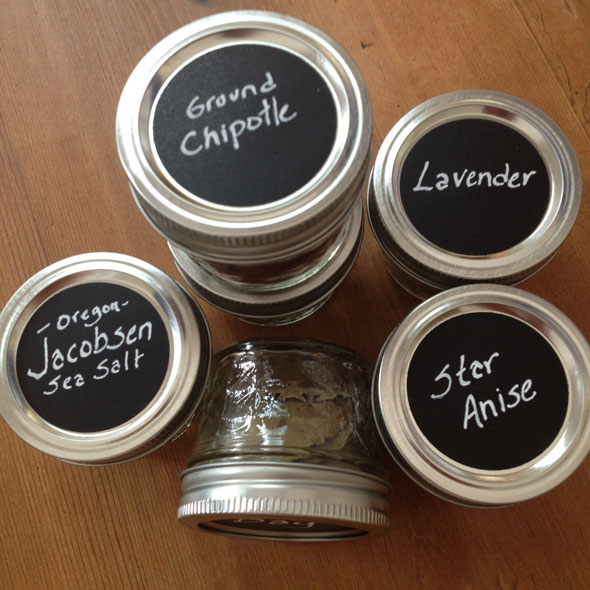 What I came-up with! 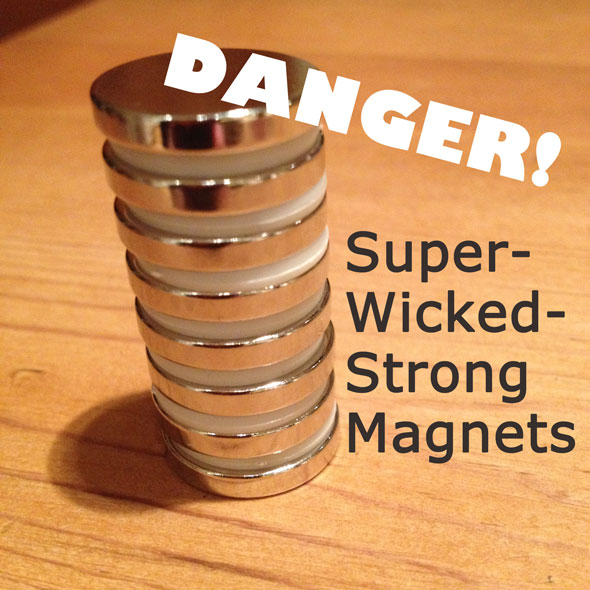 And it was a LOT of work. I ordered 60 Neodymium magnets from Magnets4Less. The little discs look harmless, but let me tell you, it took all my strength to separate each magnet - and they arrived with little plastic spacers between each magnet! The magnets are so dangerous - please be careful. I was advised to purchase ND045 (3/4' x 1/8") magnets, with a pull-strength of ten pounds (meaning it takes ten pounds of pressure to remove the magnet from a metal surface... or something like that). At 79-cents each, the magnets were the most expensive portion of my project. (We already had some super-dooper glue - E6000.) 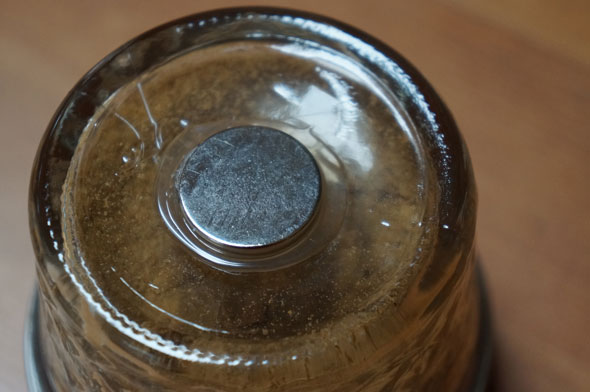 And then another difficult part - waiting 24 hours for the glue to really, really set! 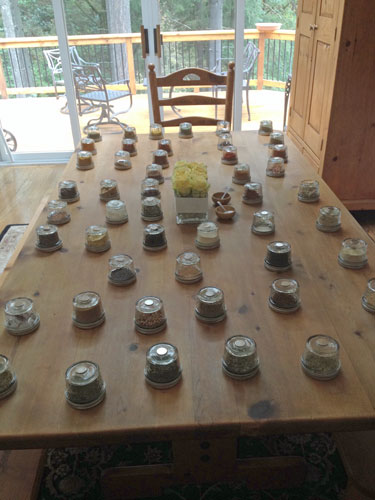 So... you may be wondering... why are the jars spaced so far apart? 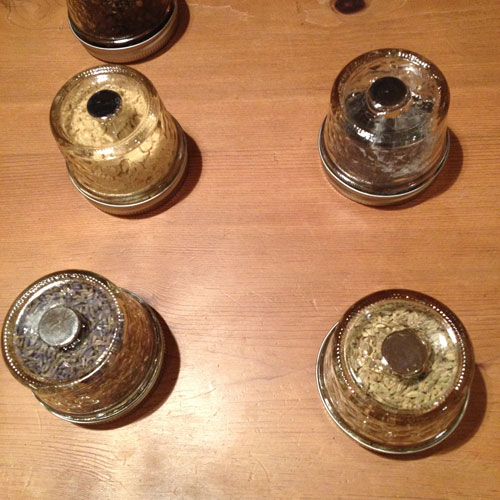 I will tell you: Suckers are so strong, if they were placed much closer, the magnets tried to jump off the wet glue onto another magnet! (I learned this the hard, sticky way.) I TOLD you they were strong! If you have little kids, do not attempt this project unless they are out of the house. (Plus, sniffing glue is not a good idea either.)

Besides actually pouring spices from the old tins into new jars, the easiest task was applying cute little adhesive chalkboard stickers and writing on the lids with a white chalkboard pen (already owned). I found the labels from Green Ridge Designs shop on etsy. 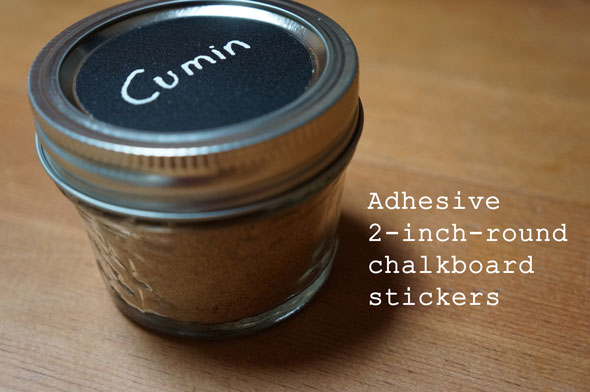 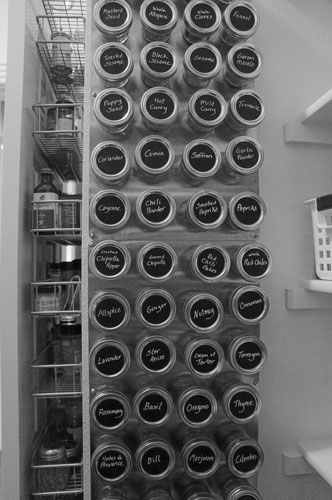 My project is complete. Spices are organized. 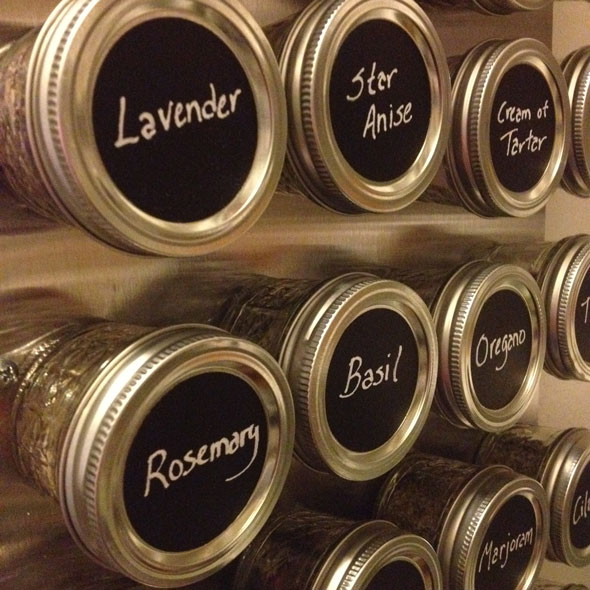 The project was a little expensive - $132 dollars ($2.20 each) - but I have a LOT of different spices - and it really gets expensive if you consider the 60 metal jars I purchased less than four years ago (we recycled them). Hopefully, this will be a permanent solution. Either way, I am so very pleased with the outcome and think the little jars are so dang cute!

NOTE: I will be taking a few days off to observe Rosh Hashanah. Happy New Year!