Santa Fe, New Mexico: Randomly, we ran into Chuck, (right) this morning in the campground. Chuck is my Dad's neighbor in Yuma and the mastermind behind the big Super Bowl Turkey Feast we attended in February. Chuck and his wife, Lynn, are also camped in this park while attending a Monaco rally. Fun to see them again.

Our good weather was predicted to change at one o'clock, so we went into town a little earlier than normal, walked around in the sunshine, visited two museums, had lunch and made it back to the RV just as the skies grew dark and the wind began to blow. 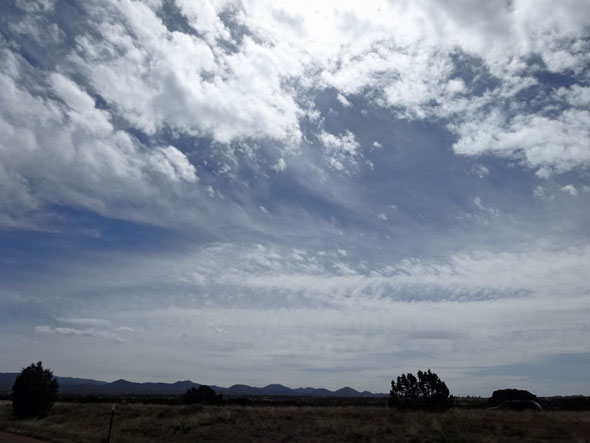 A very odd sky this morning

Though we have toured through the Palace of the Governors previously, it is still interesting to stand in the oldest continuously occupied public building in the United States. The Palace of the Governors was built in 1610, about the same time Galileo was developing the first law of motion and thirty years before the founding of the Ching Dynasty. At the time Spain was colonizing north of Mexico, England established a settlement in Jamestown, and France established Quebec. Santa Fe History in three sentences: Natives have lived in the area for thousands of years. The Spanish arrived in 1540 and ruled until 1821, when the Mexicans took control of the area. America declared war on Mexico in May of 1846 and by August, raised the Stars & Stripes in Santa Fe. 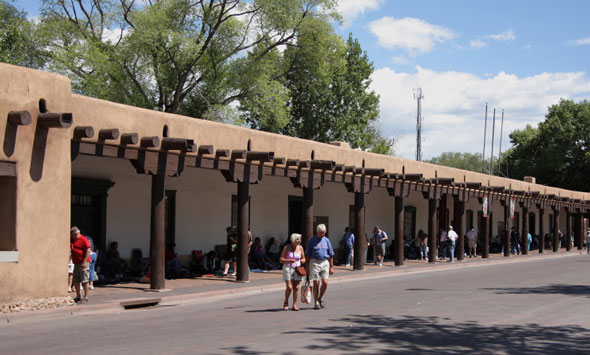 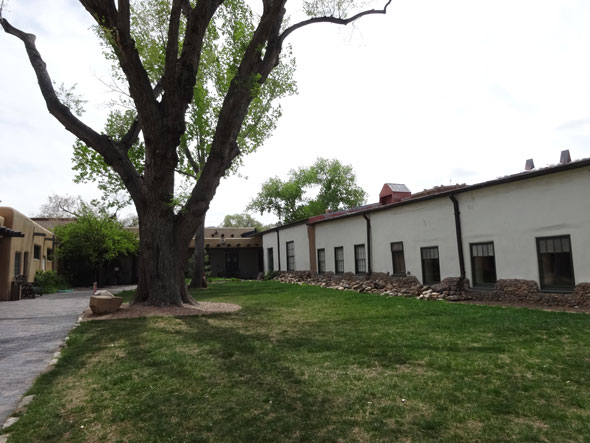 Courtyard behind Palace of the Governors today 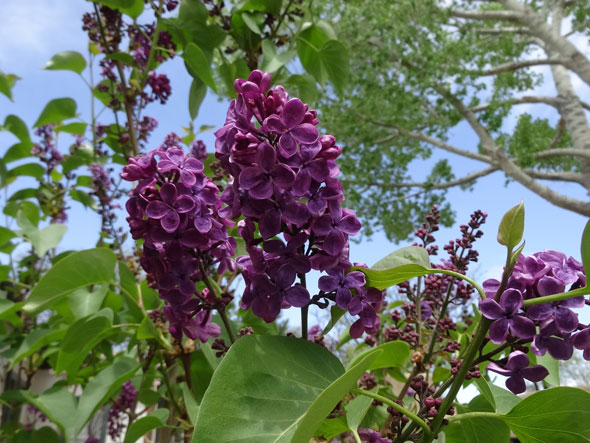 Lilacs in bloom in the courtyard 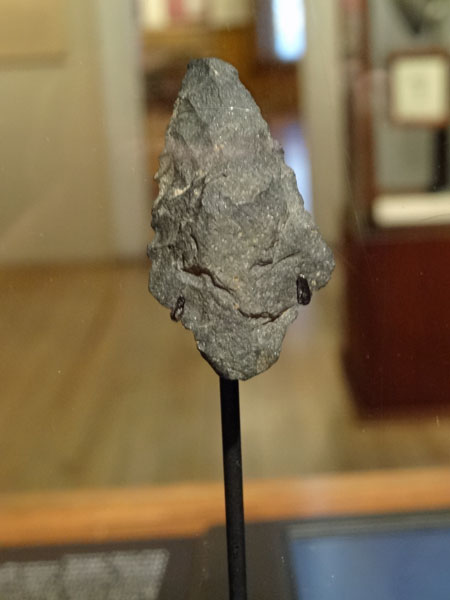 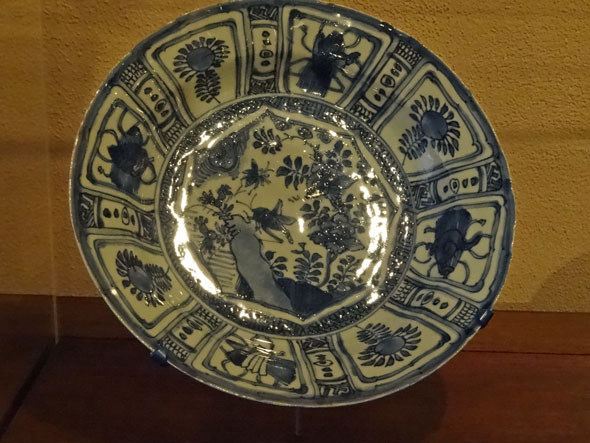 Next door to the Palace of the Governors is the New Mexico History Museum, covering the last 500 years of New Mexican history - in a very new building. 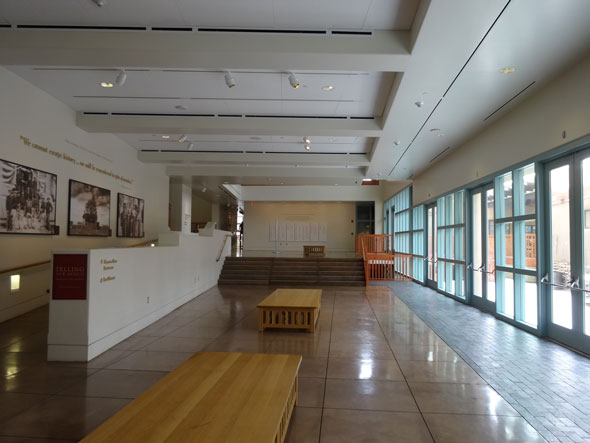 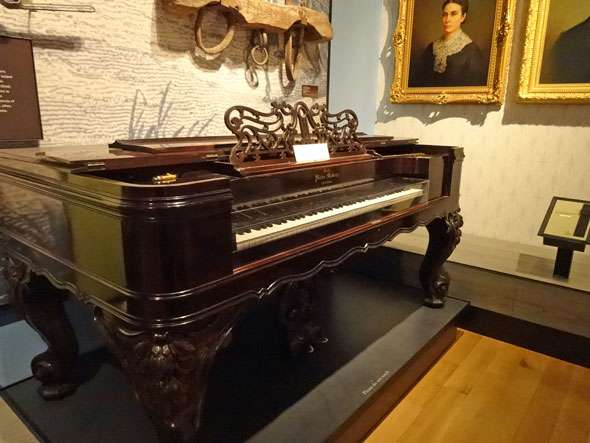 Made in New York by United Piano Makers, this instrument traveled from Pennsylvania with the Manderfield family on the Santa Fe trail. 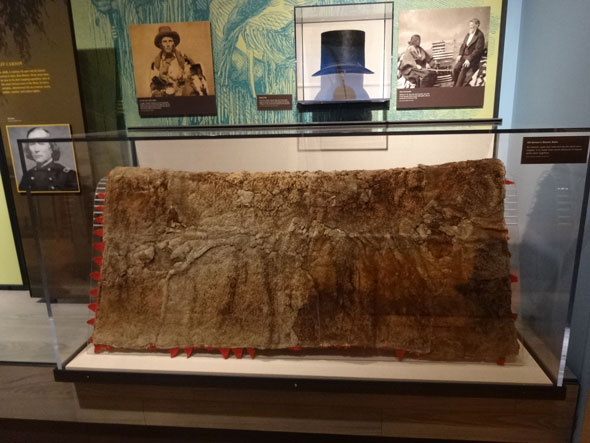 This robe, made of beaver pelts, was owned by Kit Carson.

We enjoyed our morning in the museums, but I can't say it was very child-friendly and I can't imagine anyone under twelve (?) would glean much from a visit. We paid only $9 each to tour through the History Museum and Palace of the Governors.

The winds were picking up, but the sun was still shining as we exited the museum, so we decided to risk a walk to our lunch destination, the Blue Corn Cafe - recommended by many friends and readers. They also have a brewery in town, so serve their own beer - making DT happy. 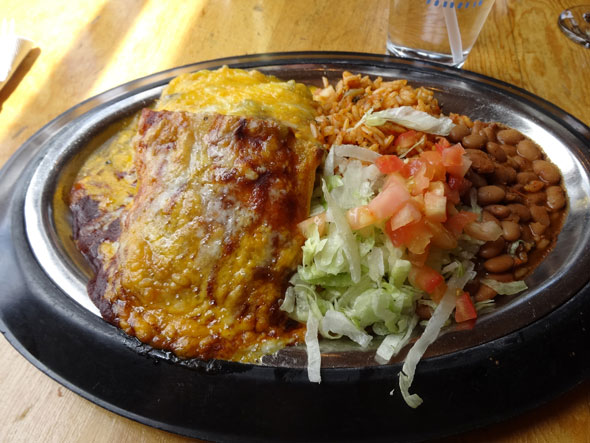 More Mexican food topped with cheese! Top left photo is our view from our table at the 2nd story restaurant; right is DT's enchiladas. Lower photo is a sopapilla filled with beans and green chilies. I just had to give that a try.

Which means, again, we will not be eating dinner. Good thing as we need to get organized as we want to leave in the morning. Hope so - the weather is taking a nasty turn on our planned route. As I type this, late afternoon, the wind is simply pelting our motorhome and we feel like we are on a boat. Our emergency weather radio is on standby.

Until my next update, I remain, your Santa Fe correspondent. 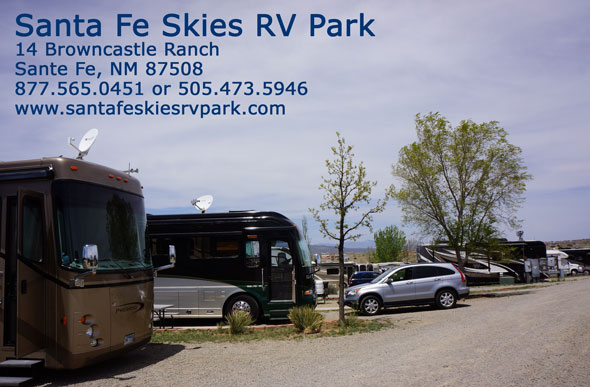