TrackTown USA:  Though barely home from our quick weekend in Los Angeles for Lucy's ballet recital, we packed our bags for four glorious days of The One True Sport at Historic Hayward Field in Eugene, Oregon. Not only four days (hotel) of track and field, but four days at its most exciting level: the US college championships.

It just doesn't get any better than the NCAA's. The intensity of excitement is unprecedented every year. The kids know their race, their throw or jump is everything. Their parents are in the bleachers. Their face is on national television.

Imagine the pressure. Your university is counting on you: finishing first-through-eighth to score points for your team. Win your event and forever be known as the National Champion. The rest of your life: National Champion. Even if a competitor finishes out of 8th place, they will forever be able to say they competed in the national championships. Something to tell the grandkids, for sure. 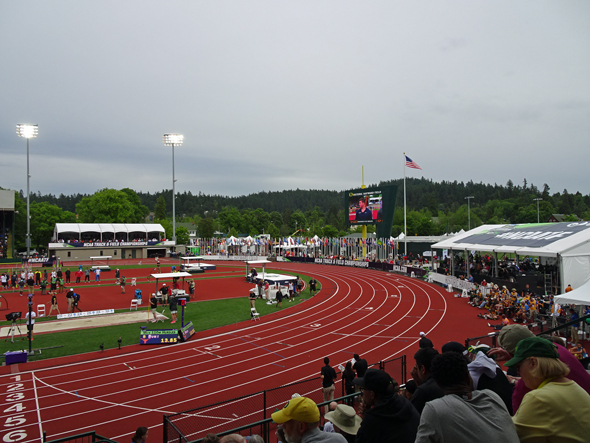 After perfect weather for the NCAA meet over the past several years, Eugene is about to endure four days of cold rain. Wind. Simply the worst weather a track athlete could suffer through. Tonight wasn't too bad. It only began to sprinkle a little during the last event of the evening, the 10000m... which, I can only imagine... the men probably quite relished.

NOTE: The national collegiate championship has - for some unknown ridiculous reason - started following a four-day men/women leap-frog agenda. One day of male-only competition, followed by one day of female-only... and repeated for the last two days. I really do not like this agenda, but was not given a vote. Rest assured, when I am in charge of the free world IOC IAAF USATF NCAA, we will go back to the boys and girls playing together. Until then...

There were a few superior performances today. 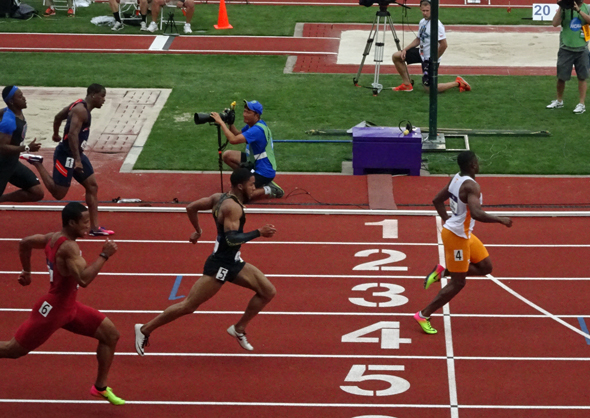 Christian Coleman, a Junior at Tennessee, ran a blistering 9.82 seconds in the first heat of the 100m. Coleman broke his school record, the national collegiate record, and became the 4th fastest American ever (known drug cheaters not-yet figured into this statistic). Mr. Coleman ran the fastest 100m in the world this year. This was just in the prelims, people! I can't wait until the final on Friday. 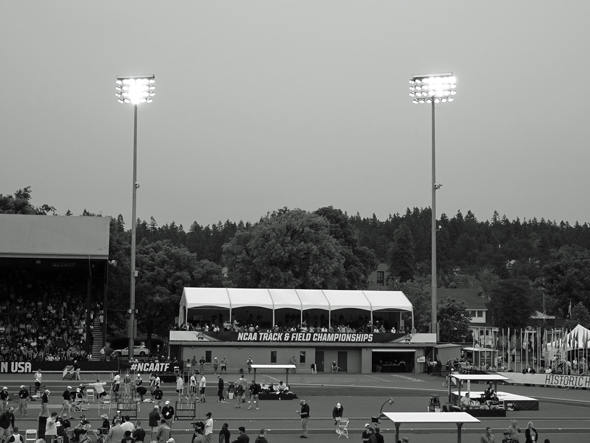 DUCK REPORT: Oregon sprinter Kyree King set UO records in the 100 and 200-meter sprints, then raced in the 4x100m relay to set another Oregon record (38.76!) in the qualifying round. This is the first time the Ducks men have been in the NCAA 4x100m relay final since 2006. Blake Haney made it into the 1500m final with a personal best 3:40.40, and Marcus Chambers made the 400 final with a personal best of 44.92. Good day to peak, guys! The only score the Ducks racked-up today were 3.5 points from a tied-for-fifth place pole vault finish by Cole Walsh.

Until my next update, I remain, your drizzly correspondent.