Indio, California:  We had no April Fooling yesterday. Dave and Steve went golfing with Woody and Jim; Tamra and I went to lunch at Tommy Bahama and then went to replace a lipstick at a nearby department store. While shopping, a gentleman in a tuxedo carrying a silver tray laden with flutes of champagne came by offering us a drink... which is why you could see women walking around the store sipping champagne. I bought two lipsticks. Later in the day, the golfers and their spouses met at Castelli's for a fine Italian meal.

After exercise this morning, Tamra, Steve, DT and I went to lunch at Tacos Gonzalez. We rarely go to Tacos G on a Saturday. Place was packed. 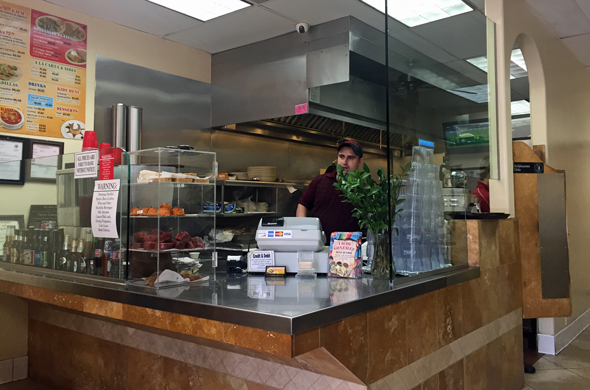 The take-out counter at Tacos Gonzalez 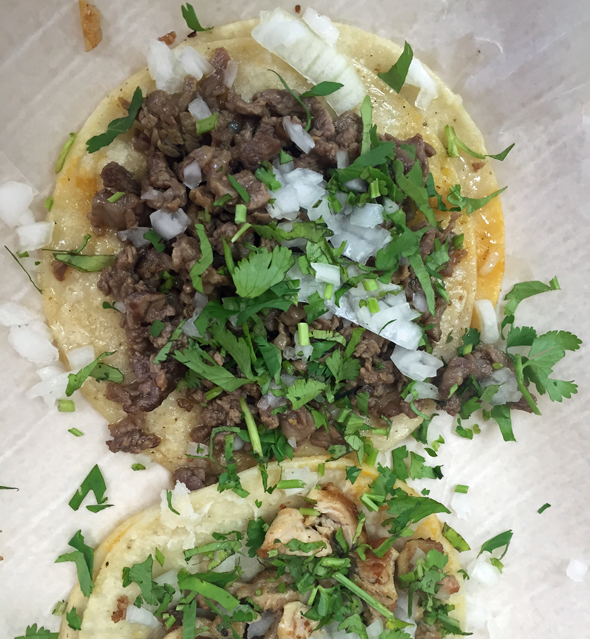 Our mid-day activity was a visit to the Indian Wells Arts Festival, held at the famous Indian Wells Tennis Center - home of the BNP Paribas Open. The tennis tournament was held last month with Novak Djokovic taking the men's prize. Victoria Azarenka's had an amazing performance, surprising Serena Williams, to win the women's cup. 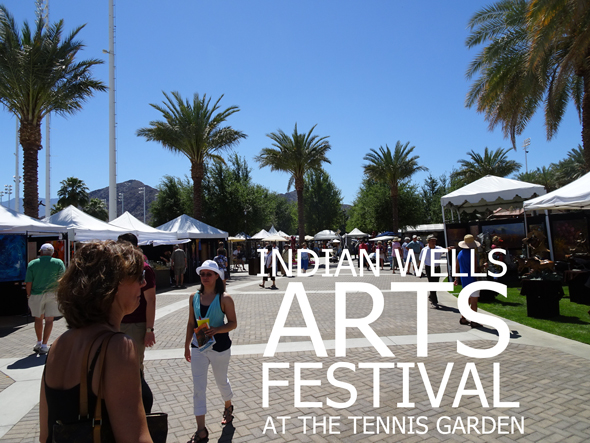 Imagine our surprise, just after entering the festival to find artist Ricardo Breceda - and a few of his metal sculptures - at the festival! Since we had spent Thursday in Borrego Springs exploring the desert to find Breceda's pieces, our friends really enjoyed meeting him and talking about his work. 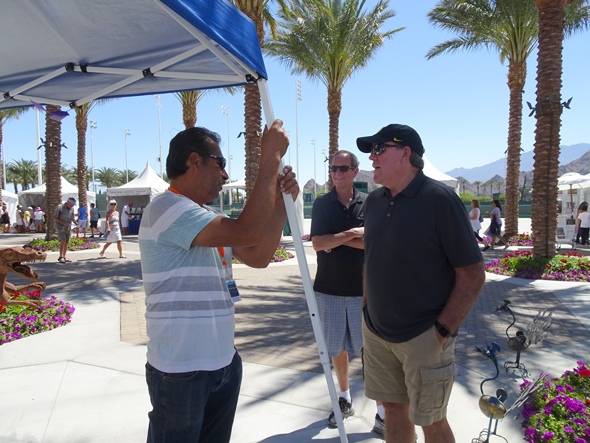 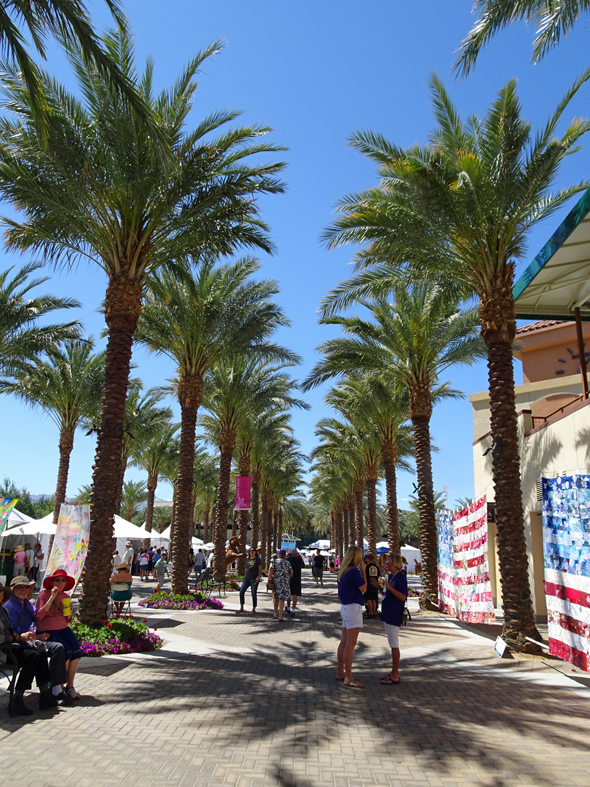 We were familiar with many of the artists on display, as we seem to attend several arts festivals in the desert. Again, we did not make a purchase - but we certainly enjoy looking and people-watching. 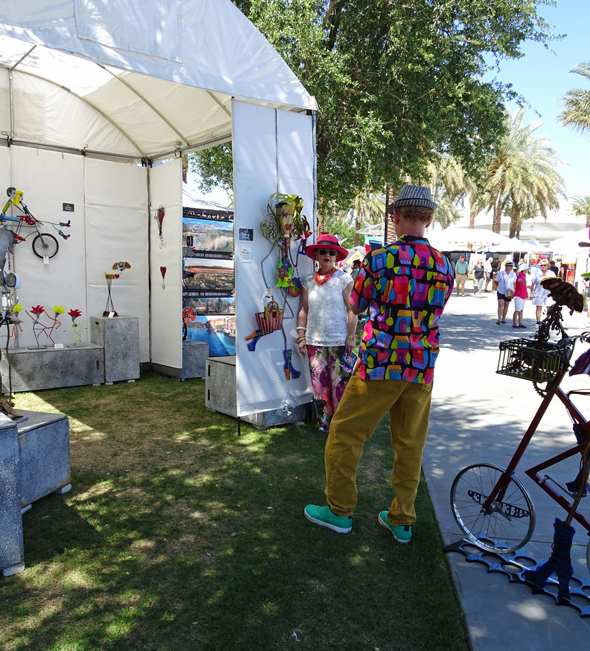 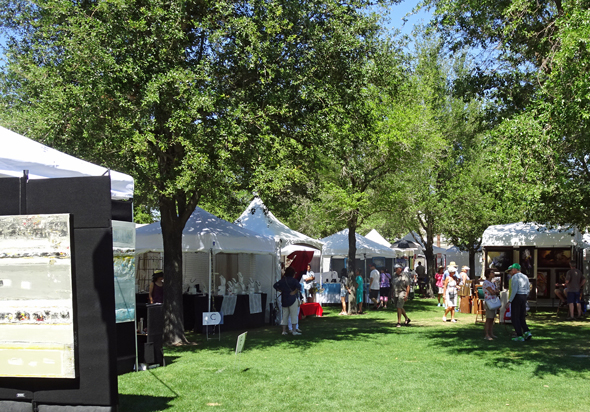 It was 90 degrees today, but we found plenty of shade on
the grounds of the beautiful Indian Wells Tennis Center 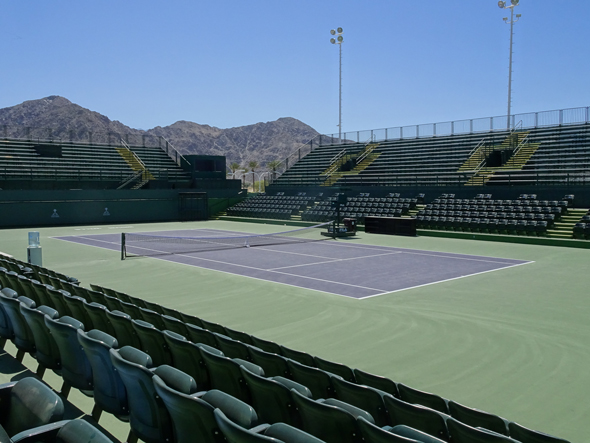 One of the courts for the tournament

After our fun day, we returned to our shady pavilion and watched some college basketball. After shooting lights-out against the Ducks last weekend, Oklahoma completely folded against Villanova. What a choke. (My bracket has been toast since the first round of the tournament, so I no longer have a favorite in the tournament.) Dave grilled steaks, chicken and asparagus. I made a big Greek Salad. More Scrabble may have been played. A few corks may have been pulled. A perfect evening.

Until my next update, I remain, your artsy correspondent.