Astoria, Oregon: I don't know about you, but I think there is something wrong with using radiant floor heaters in July! While I'm on the subject of weather... the Mayor of London has stated the weather for the Olympics is going to be terrible. Lots of rain is predicted. I guess TrackTown12 really prepared the US team for London. Yeah, DT!

We spent a drizzly dreary day on the Oregon Coast. Just our luck, the one good day would be yesterday - a day we traveled. Rat farts. We jogged loops on the huge lawn area of the RV park in foggy mist, and by the time we had showered and were heading out for our daily adventure - it was full-on raining. So much for the picturesque photos of the spectacular Oregon coastline I had planned for my blog tonight. 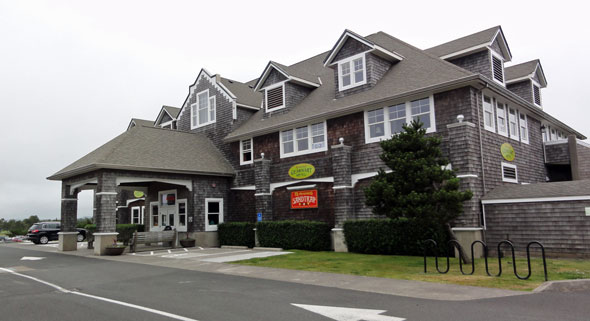 Instead, we did research for a future golf trip DT may organize for his posse at the historic Gearhart Golf Links - Oregon's first public golf course, opened in 1892. Now owned and operated by those Fabulous McMenamin Brothers - the historic Kelly House has been restored and now holds an 18-room hotel, several restaurants and pubs, meeting rooms and a pro shop. 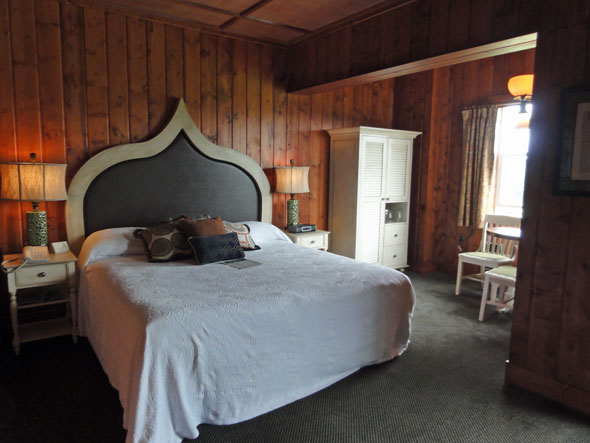 Many of the rooms have balconies overlooking the golf course and they are decorated in a very inviting "Oregon Beach Chic" style. 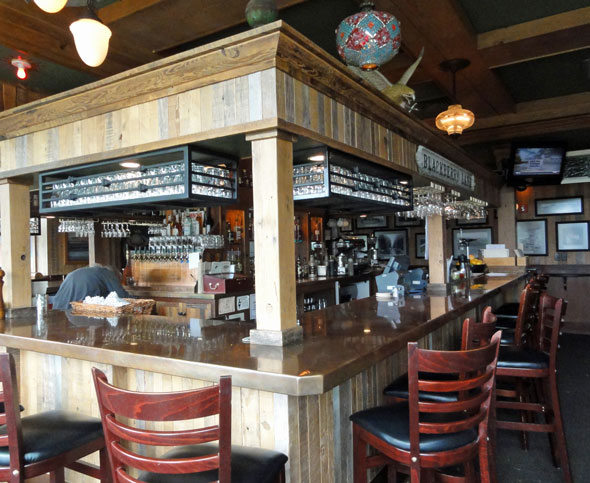 The main (and largest) restaurant in the hotel is the Sand Trap. There is also a cozier pub (with a lovely fireplace) on the lower floor at the pro shop called the Pot Bunker. 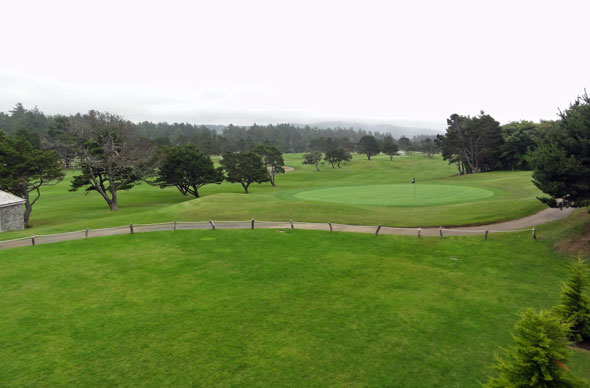 On a day like today, I would have just liked to curl up next to the fire and watch the golfers finish on the 18th hole... except I did not. We had things to do and places to go... but we did have lunch in the Sand Trap Pub.

I had a garden salad. DT had the same salad, but topped with shrimp. And we may have tried a half-order of their tots, served with jalapeno and a Sriracha mayo. 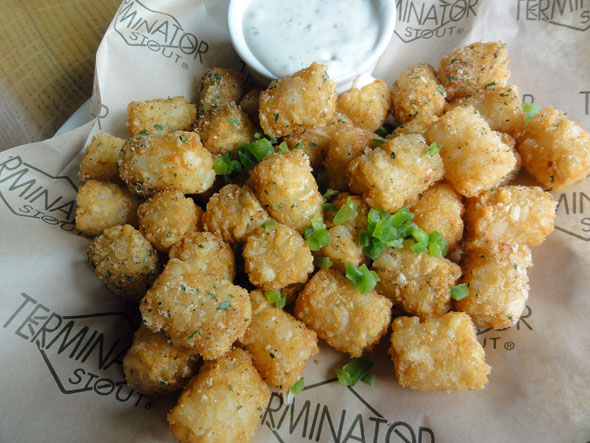 I don't think I ran quite enough this morning...

After lunch we continued south to Cannon Beach and bought some gorgeous (though really late in the season) fava beans, before turning around and heading north. Once in Astoria, we continued over the 4+ mile bridge near the mouth of the Columbia River to Washington. Destination: a fish shop we had visited on our last trip to this area. 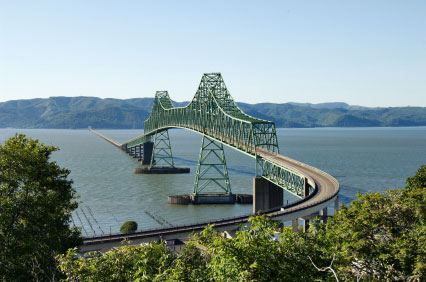 Astoria Bridge, from the Oregon side - looking north.

I did not take the bridge photo above. I bought the photo. With the mist, only a few hundred feet of the incredible Astoria-Megler Bridge were visible at a time today... but I thought you might be interested to see a four mile long bridge across the mouth of one of the mightiest rivers in America. Impossible to see, but there is another tall arch at the Washington end of the bridge as well... and interesting enough... the Oregon-Washington border is just a few hundred feet south of the Washington side. I don't know why, but I just assumed the border would run down the middle of the river. It does not. 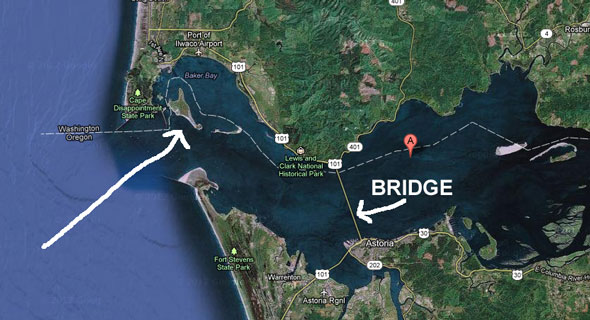 I think it's because Oregon wanted that little island over by the mouth of the river.

So a few minutes after crossing the river and making a left, we arrived at the pretty little Port of Ilwaco, Washington. 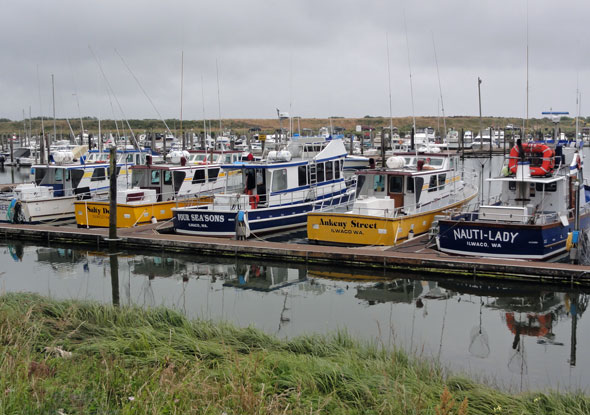 Dave commented that "Ilwaco" is Native American for "closed Monday-Wednesday". That guy has such a way with languages! Seriously, it was like a ghost town. We drove across the river for nothing. No fish. 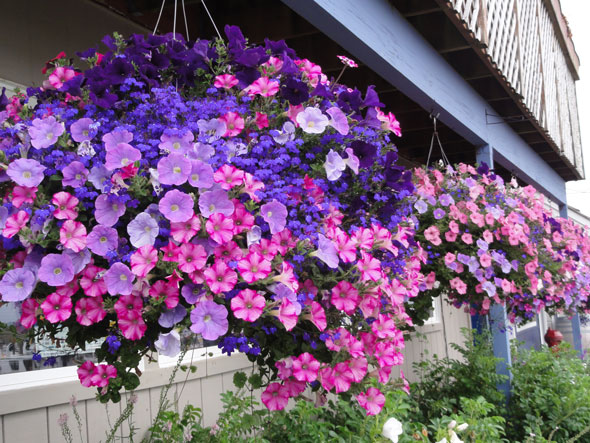 Well, the Port of Ilwaco did have amazing flower baskets.

We returned to Astoria and bought our smoked salmon at Josephson's Smokehouse - a very nice shop we have patronized previously. Not only did we find locally-caught smoked salmon, we also found a few more treats for our growing Oregon gift basket contest prize (see below). 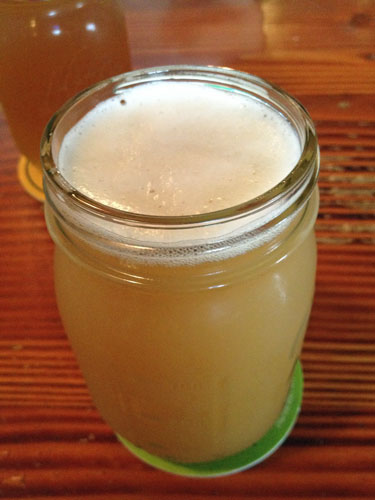 Our last stop was the Fort George Brewery for a frosty beverage. I could not eat another thing after those tots, so my dinner consisted of one little "jar" of beer - a Quick Wit Belgian-style ale with lemongrass, coriander and orange. (I know it sounds odd, but it was quite refreshing. And just think how refreshing it would be on a hot sunny day. I will just have to.)

Interesting tidbits: Astoria was first called Fort Astoria (as it was first established as a fur trading post for the Pacific Fur Company owned by John Jacob Astor), then Fort George (War of 1812), then Fort Astoria, then finally just Astoria.

That is enough history, I will leave you with some "future": 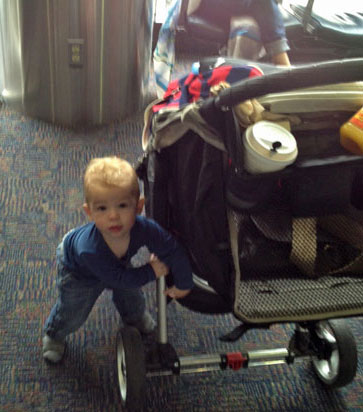 I think someone is getting ready to walk.

There are (at least) three monoliths along the Oregon coast named "Haystack Rock". One is in Cannon Beach, one in Pacific City (Cape Kiwanda)
and another in Bandon.

How tall (in feet) is the Haystack Rock at Cape Kiwanda in Pacific City?

Email your answer to win@rvgoddess.com
before midnight (pacific) Wednesday, 18 July 2012.
One entry per person. The winner will be chosen at random from correct answers. The prize is an assortment of Oregon treats -
shipped to US postal addresses only. Good luck!

« Up the Coast Our Last Day in Astoria »