Tucson, Arizona: Our journey only took us about 100 miles today through the flat Arizona desert to Tucson. We have historically terrible luck in Tucson. So horrid, in fact, I had to alert my entire family that I am in Tucson and they have all promised to stay away from Tucson for the next week. The last time we were in Tucson with my parents and brother, my Mom had to go to the hospital - twice. Time before that with my parents and a different brother, our Grandmother died. Now family members are only allowed in Tucson solo - rarely, if at all.

Be gentle with me this week, Dear Reader.

So remember the other day when I showed you that nasty uphill curve My Driver had to negotiate to get into our campsite at the Queen Mine RV Park? Today I made a video of My Driver coming down the driveway!

I tell you, he handles the Magna Peregrinus like she's a VW bug!

Plus - it only takes like 15 minutes to get anywhere this state! (Just kidding, DT keeps it under 60 at all times.)

So we arrived in Tucson to one of those mega RV/park model places that is so large it should have it's own zip code. We are in site #1094! 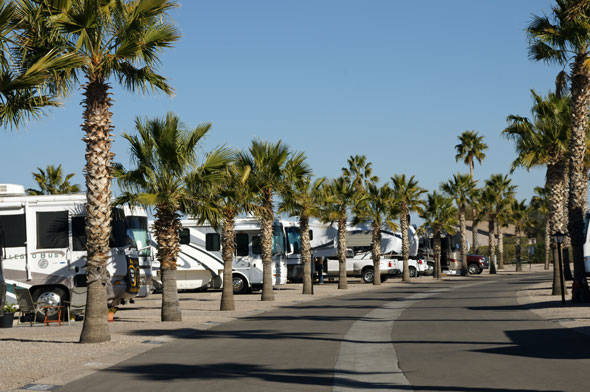 Our Tucson luck started out on the right foot when the RV tech showed up as scheduled to replace the LNB on our rooftop internet satellite dish! 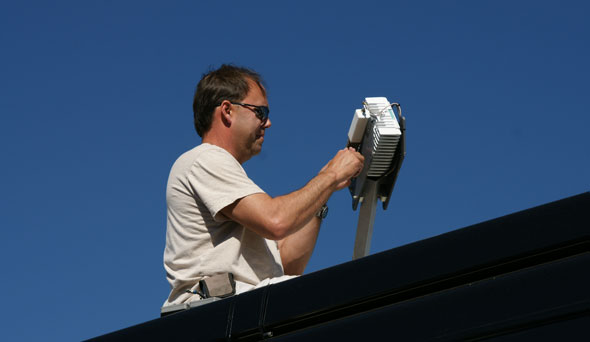 Yet another man on the roof of our RV! This is Patrick Rodda of Desert Satellite Systems (520-839-9550). He knows his stuff. A great television or internet satellite technician. Unfortunately for us, the $360 LNB we had over-nighted from Salt Lake City was not the issue. On the positive side, we now have an extra LNB if ours ever does go bad. Pat determined we are just on the edge of the satellite footprint or my provider is not giving the satellite antennas enough juice. He was able to get us up and running, but I suspect our service will be in/out or off/on until we move west. Best odds is that we will have satellite internet in daylight hours. After dark? This RV park has wifi and there is always my trusty iPhone-tether.

There was only one thing that was going to set me right for the rest of the day and that was a visit to El Charro. The last time we dined at El Charro, we were with my late Mother. A bit sad to revisit El Charro tonight, but Mom loved a good Mexican restaurant and El Charro certainly met her standards. 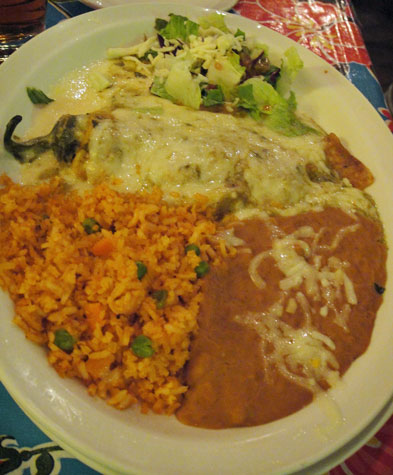 DT ordered the chile rellano. It was delicious. So much food. (Don't forget the guacamole & chips we had as an appetizer.) 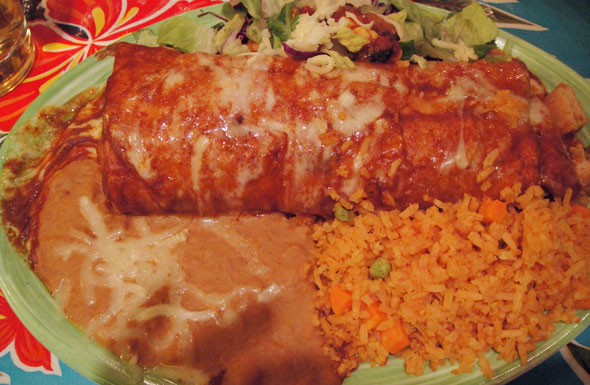 Opened in 1922, El Charro is famous as the birth-place of the chimichanga, which translates to the Mexican-Spanish as "thingamajig". Apparently a chimichanga is an enchilada that accidentally fell into the deep-fryer. Gourmet Magazine named El Charro one of America's "legendary restaurants". El Charro serves chimichangas plain, but the first time I dined at El Charro, our server, Ricky (he was at El Charro his entire four years at the University of Arizona), told me I needed to order the chicken chimichanga "enchilada-style" with red sauce. Ricky knew his chimichanga. It has been one of my favorite meals at El Charro ever since. Ricky is no longer with El Charro. He is probably married with three kids.

We toasted My Mom tonight. She would have loved sitting in the warm outdoor patio, sipping on a margarita. It was a great night.

Until my next update, I remain, your lucky correspondent.

« Every Now & Then Saguaro National Park »