Living through a kitchen remodel

Okay, I know in advance this column will not garner a lot of sympathy from readers who have lived through a months-long kitchen remodel - yet I am still willing to discuss the activities around here the past few months and explain why it has been so quiet on this website. Besides going away for a week (Napa Culinary Tour), spending a week with my parents while my Mother was in the hospital (all well now) - we had a little cosmetic surgery performed on our fifteen-year-old kitchen!

I only wanted new countertops, but one thing often leads to another. New countertops required a new sink. A new sink needed a new faucet. A new sink even meant maybe it was time for a new, quieter, garbage disposal. Since a new cut-out would have to be created to accommodate the cook top... well, time to replace the POS cook top I have hated for fifteen years. Then there was the issue of our kitchen cabinets. They are painted white, and after 15 years really (really, really) needed to be repainted. After the new countertops went on, the cabinets looked especially dreary.

And, finally - yes - it was time to paint the walls - no more white walls. 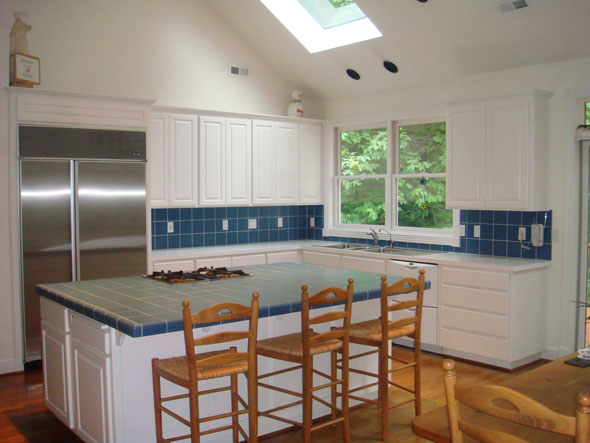 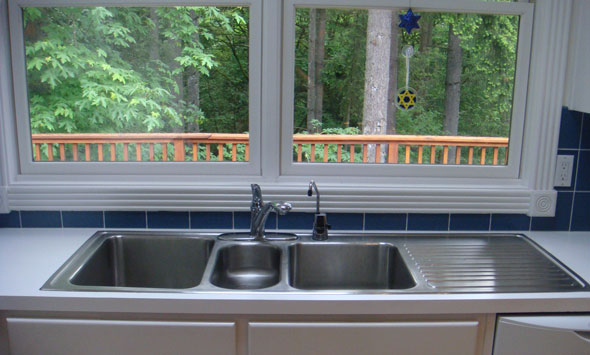 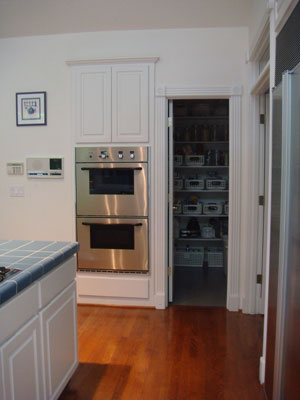 I love my ovens - they stay! 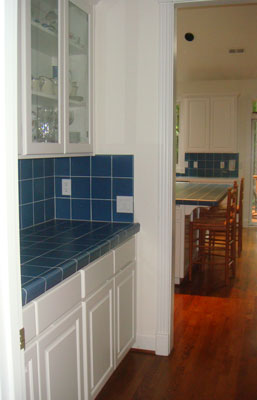 Ben Harris of Artisan Surface Design in Portland, Oregon, helped me plan the new countertops. We chose quartz (over granite for several reasons). Ben came out several weeks ago to make templates for the kitchen, butler's pantry, kitchen desk and built-in buffet. Then he sent a team out to destroy my kitchen - removing the old tile and countertops. Artisan Surface Design usually takes two days to replace countertops. Our job did take three days - but we did cover 109 feet of counter space. One day for tear-out and one day for placing the new countertop is the norm. 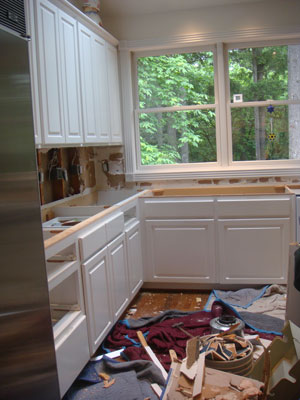 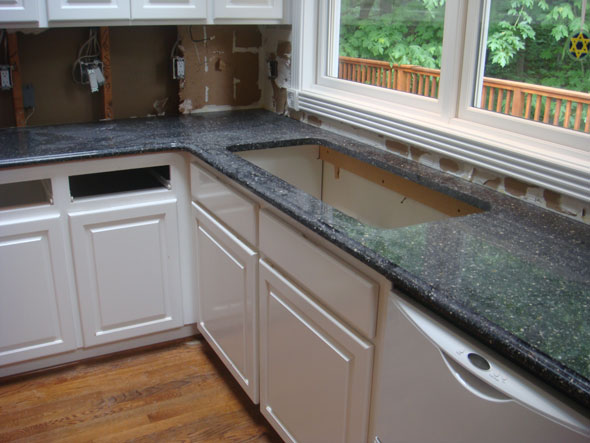 The new quartz countertops are set in place 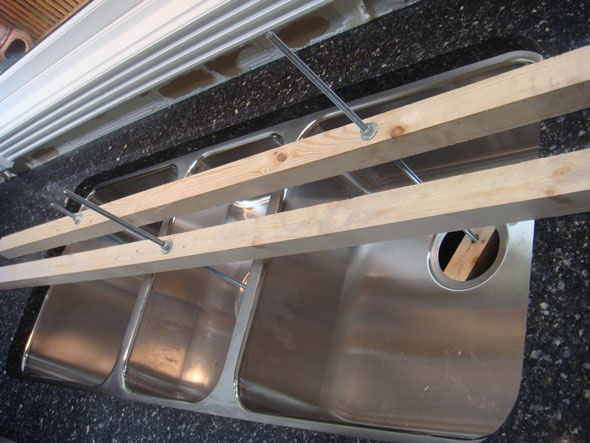 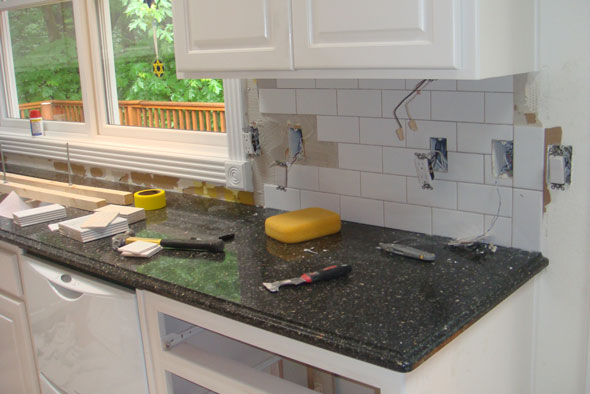 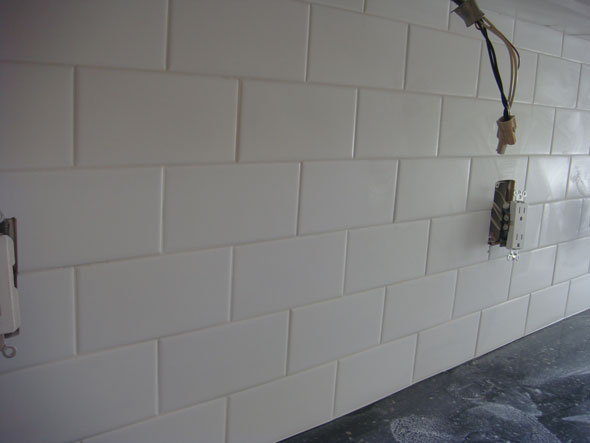 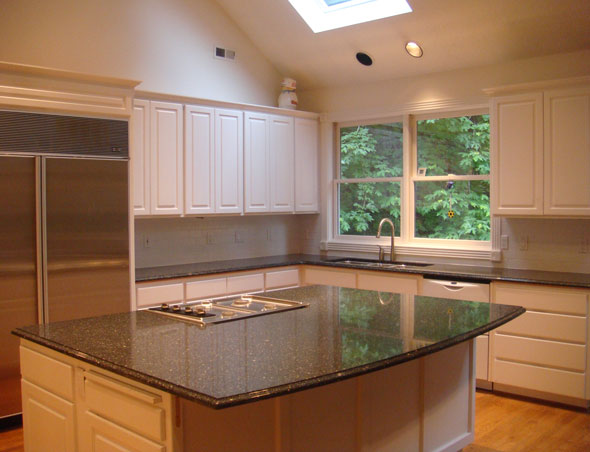 Then we had the weekend off! I had ordered a faucet that would not arrive for six weeks, so I went down to the hardware store and bought the least expensive "temporary" faucet (with the same plumbing configurations as the back-ordered faucet) and had it installed along with a new garbage disposal. The new cook top has been set in place, but was not yet plumbed to the gas line. 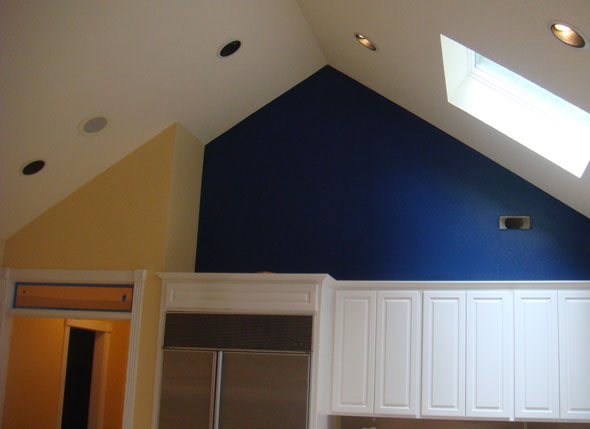 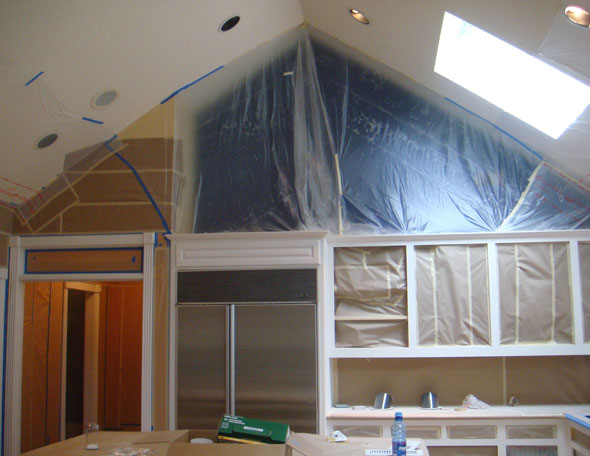 After painting the ceiling & walls, painters covered the walls with plastic and began sanding and
spraying (then sanding and spraying again) the cabinets. The doors and drawers were
removed and sprayed in our garage. 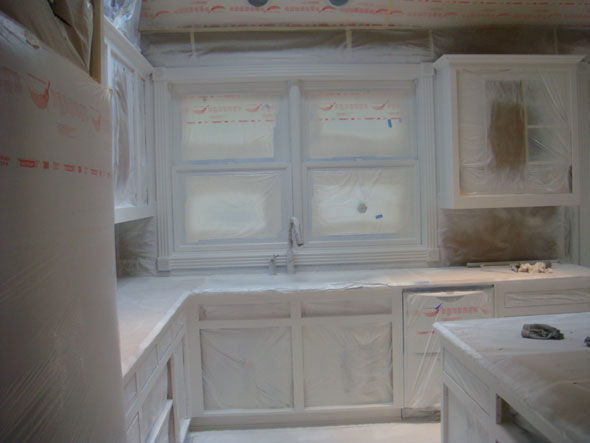 Bernard Painting (Portland, Oregon) is always our choice and, again, they did a fantastic job. The job did require the entire five days Brad Bernard had estimated. Most of the time was spent prepping the walls and moldings... and as long as they were here, I had them paint the stairwell and the lower hall... plus a few more rooms! The painting doesn't take much time at all - the moldings and cabinets are sprayed - but it takes quite a while for the prep (and they are so meticulous) and time for the cabinet and trim paint to dry... and after it dries, the team sands it again before spraying a second coat. It was worth the trouble and being sealed out of the kitchen for a week (I knew DT would be out of town all week, and this certainly helped the stress-level).

The painters have finished and I am now putting the kitchen back together. Check back in a few days for the "after" photos.