11:00a: It's finally here. The biggest game of the year (so far). The 114th Civil War. Even though DT and I were up  very last night due to a family dreidel tournament (won by our niece, Carla, who took home her winnings of yes sir, yes sir four bags full of chocolate coins), we were up before the crack of dawn to watch ESPN GAME DAY live from Corvallis, Oregon. At nine o'clock Lee Corso donned the Duck mascot head and we were ready for some football.

I have a pot of chili on the stove. It is 37°. It is not raining. The fireplace is keeping us warm and I will be checking-in from time to time today - something I am not able to do when we are tailgating at Autzen Stadium because I am usually too busy giving tours of our motorhome entertaining guests.

Steve, Mary, Woody, Kathy, DT & Me at the University of Oregon

This photo was from last week - let's see if we are still smiling this afternoon. GO DUCKS!

12:52p: The game has started. The first few minutes were so exciting. Casey Matthews sacked the Beaver quarterback and he was seeing stars for a moment, but rallied after a one-minute rest and is playing again. The Ducks fumbled the ball and the Beavers recovered. Then the Ducks intercepted the ball. This was in just the first moments of the game. Makes a girl dizzy. DT and I are snacking on non-healthy foods (the carrot sticks on the platter are mostly for show) and are ready for an exciting afternoon.

1:10p: Oops. Beavers scored. This is so typical of the stressful Duck games. The other team scores first and then we rally to beat them. Let's make sure this is true today as well. By the way... the Duck helmets are awesome! GO DUCKS!

1:20p - End of the first quarter: Too much excitement. Fumbles. Picks. Blocked extra points. Wonder what my blood pressure is right now? (DT has actual steam coming out of his ears.) Thing is, neither team looks sloppy, but both teams are making stupid mistakes. Ducks 6, Beavers 7.

Dave just opened and beer and I am changing my name to LaTerry.

2:13p - Half-time report: Ducks are ahead, but it isn't pretty. Fumbles, penalties, cheap-shots, blocked kicks, missed kicks, interceptions - on both sides. I am expecting great things from My Ducks in the second half.

Meanwhile, Captain Jim and Mary have taken their motorhome to Indio and are watching the game at the Beer Hunter Sports Bar, where they are enjoying unhealthy foods, drinks and the company of fellow Ducks. We flock together. 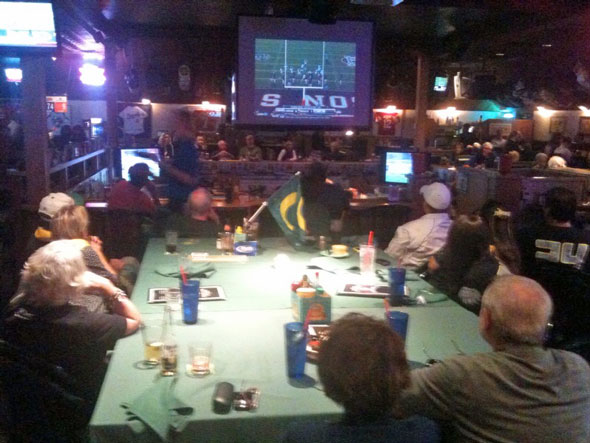 Captain Jim emailed this photo from his phone!

2:45p: Things are looking up. The Ducks have a few tricks in their play book. How about a fake punt? Yes! 23-7 Ducks, early in the third. 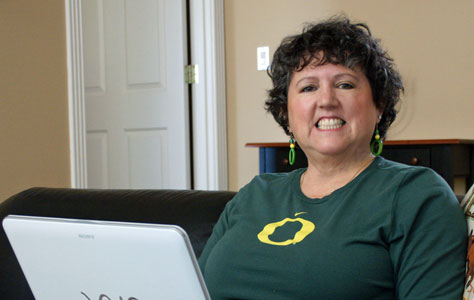 3:10p: 4th quarter begins. Third quarter ending was sloppy and ugly. Beavers were able to make a field goal and the score is now 23-13 Oregon. I think there is a little too much dirty play going on, but I always think that because I just can't stand all the hitting, pushing and tackling. Of course, if not for the hitting, pushing and tackling it would just be soccer. 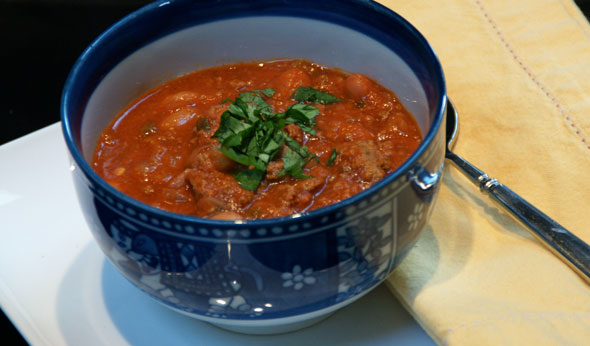 3:35p: My Driver is still too nervous to eat, but I had a bowl of the beef chili I started preparing last night. Made with beans from Rancho Gordo, organic beef, onion, garlic, cilantro, jalapenos, crushed tomatoes and handfuls of aromatic spices - it was yummy and now I have a lot of energy to cheer for the Ducks... oh, look, the Ducks have intercepted the Beavers again!

4:00p: End of the game. Ducks win! 37-20, which is pretty strange as the line was Ducks by 16.5 points. How do they know this stuff? I guess the Oregon State Beavers are not Giant Killers after all. The Ducks have won every game this year and finish 12-0. Unbelievable! I LOVE MY DUCKS!

The bowl game match-ups will be announced tomorrow. Then we will finalize our travel plans (but don't y'all worry - I made reservations in Pasadena, California and Glendale, Arizona weeks ago).

Until my next update, I remain, your very proud and happy correspondent.
« Eight Things Going to Glendale »