Quite a day for Duck Fans! The University of Oregon was officially selected to play Auburn University on January 10th in the BCS Championship Bowl in Glendale, Arizona. We will be there!

No, we do not have any extra tickets.

There was a lot of hullabaloo in Oregon today. Though our state is divided between Oregon and Oregon State - most Oregonians are excited our little (population less than four million) state is sending a team to the championship game. And I was wrong about the Beaver fans. After their loss yesterday, the Beavers did not riot. The self-proclaimed "Giant Killers" just left their stadium and let the Duck fans celebrate. They were so gracious! 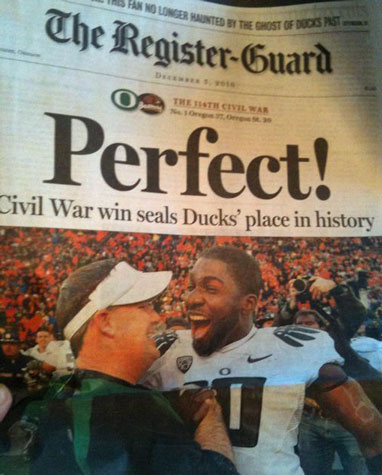 Front page of The Register-Guard, Eugene's daily newspaper
(photo by my friend Susan... and totally stolen from her facebook page)

Our tailgate crew met for dinner tonight and made a flow-chart to disperse the tickets, parking passes and hotel reservations we have/think we may have. The discussion went on for quite some time and required several pitchers of beer. It is nearly a full-time job being a Duck fan this year.

Speaking of the Ducks (oh... was I?), the local Eugene TV station made a little "season highlight" video featuring the great song from Supwitugirl. This video is so current, plays from The Civil War are included. Enjoy:

Until my next update, I remain, your "Okay, I won't write about the bowl game for a day or two" correspondent.