Indio, California: While the kids were visiting us last weekend, we really noticed how much Leo had grown and how small his bike suddenly seemed. The seat was raised to the max. It was time for a larger bike. I made the mistake of telling Leo he needed a new bike and maybe Bubba and I could get him a new bicycle? He was so excited, and before they headed back to Los Angeles Monday morning, Dave, Lenny and Leo went to the local bike shop we patronize and bought Leo a shiny new bike – a 24-incher! 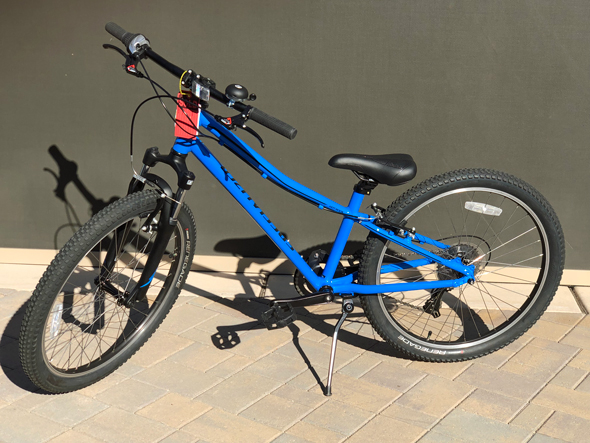 At the shop, Dave and Lenny were convinced Leo needed one size smaller bicycle… but the shop actually has a height chart suggesting the proper size. The sales clerk told them if they bought a smaller bike, a larger bike would be needed in a year or so. They put Leo on the 24-inch bike, took him out to the parking lot in front of the shop, and Leo rode the bike like it was his job. Sold.

Unfortunately, when purchasing a bike from this shop, they have to tune it, check it, double check it, and get the gears in perfect order before taking delivery. Leo would not get his new bike that day. (Insert sad face here.) We told Leo we would deliver his new bike… which is how we found ourselves in El Lay this weekend. 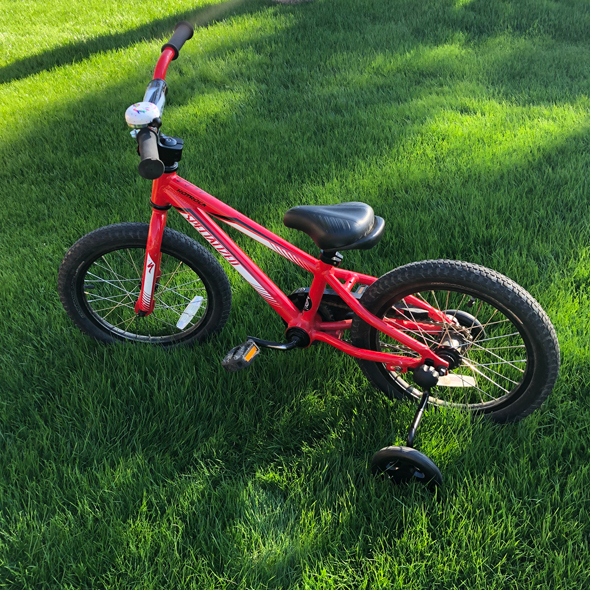 But, wait, there’s more! If you buy this shiny new blue bike today, we can turn your old red bike into the perfect ride for your little sister! The shop lowered the seat and handlebars, added training wheels and a shiny unicorn bell – and Lucy has a new bike as well! 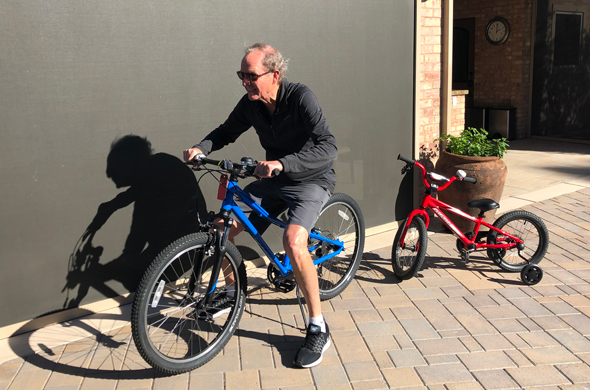 I’m still surprised when I see the difference in size of the two bikes and can’t believe 1) that Leo can ride the blue bike, and 2) that he was riding the red bike last week. 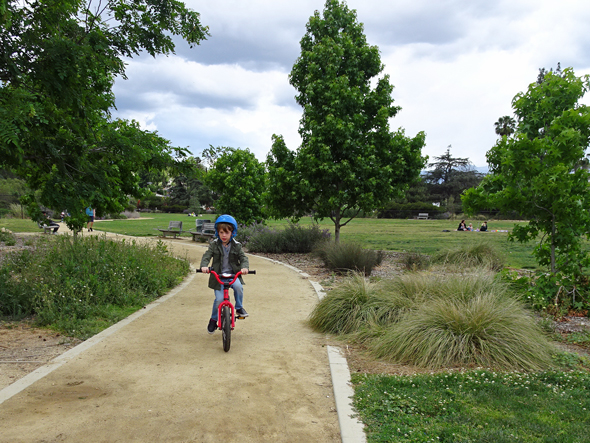 On Saturday, we loaded the two bikes into the back of our Jeep and headed west to Los Angeles. We met the kids at a very nice park in San Marino (near Pasadena) that has a 3/4-mile paved bike path circling a large playing field. This path allows parents to stay in one spot and have a complete vista of their kid circling the park! Genius. Lacy Park also has walking paths, tennis courts, baseball fields, a fabulous playground, a rose garden, and a war memorial. Who knew General Patton was from Pasadena? 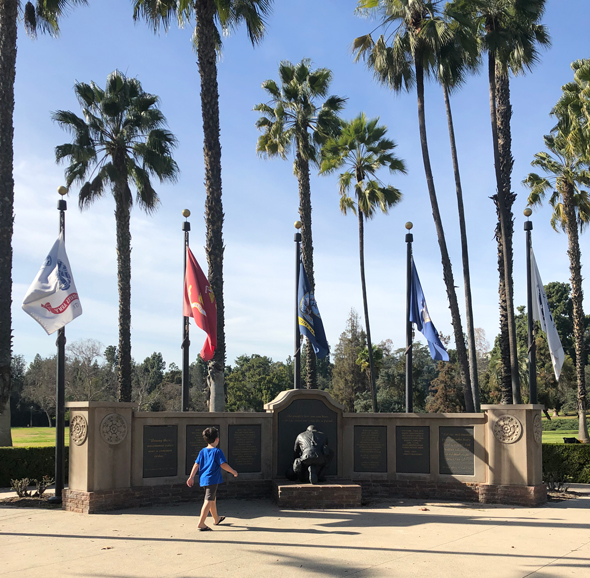 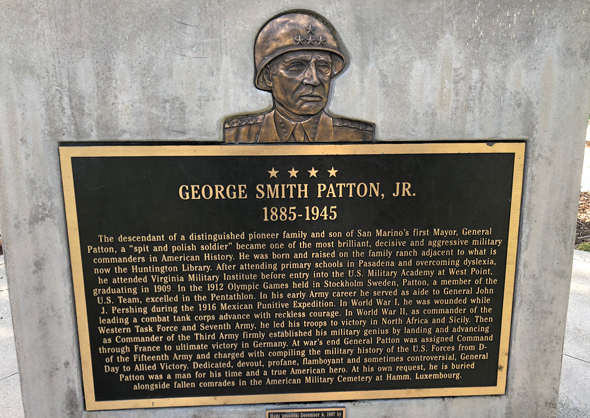 Dave and I visited the war memorial while waiting for the kids to arrive and when they showed up, Leo came racing up to greet us, giving huge hugs and thanking us for bringing his bike. He was so happy and excited! 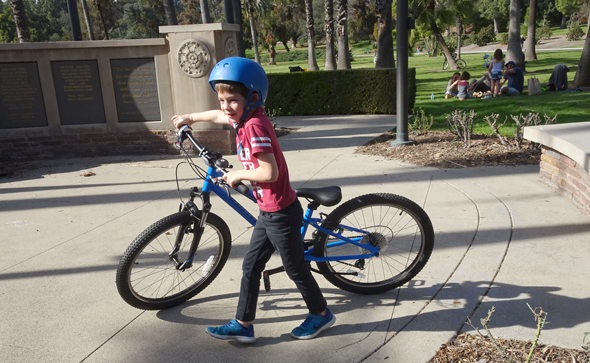 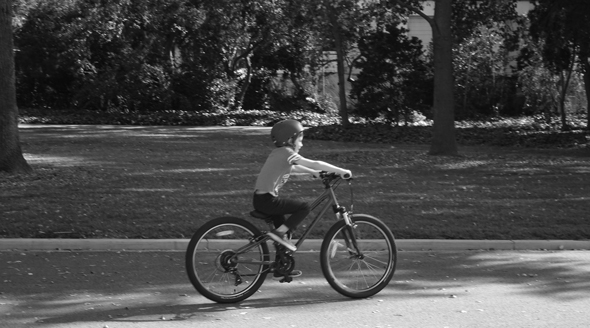 After a test run – this bike does not have pedal brakes, only hand brakes – Leo figured it all out and learned to shift gears… and he was OFF! Dave thinks Leo rode ten miles on his new bike today… and Leo was pretty tired already because – drum roll – he went to see Elton John last night and didn’t get home until midnight. (The tickets were his Hanukkah gift from his parents; he went with Lisa.) This kid is living his best life!

Lisa brought a picnic lunch and we ran into all sorts of their friends and classmates in the park today. Such fun! Lucy rode her new bike around the park as well, but was more interested in playing with her pals on the play structures, swings and slides. It was 80° in San Marino today. 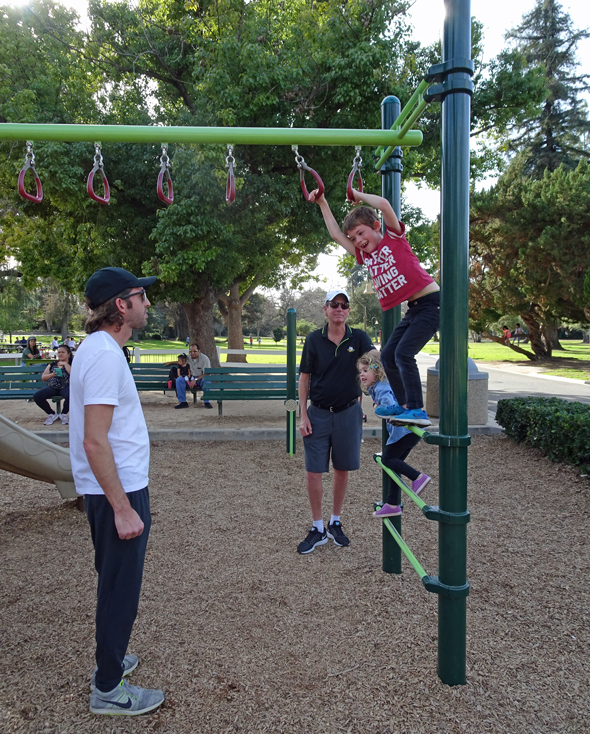 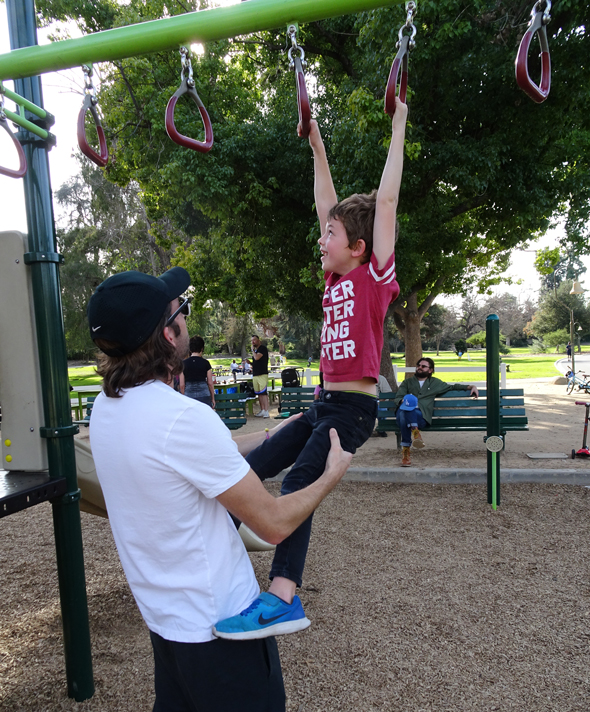 I’m pretty sure there wasn’t another kid as happy as Leo at the park this afternoon. 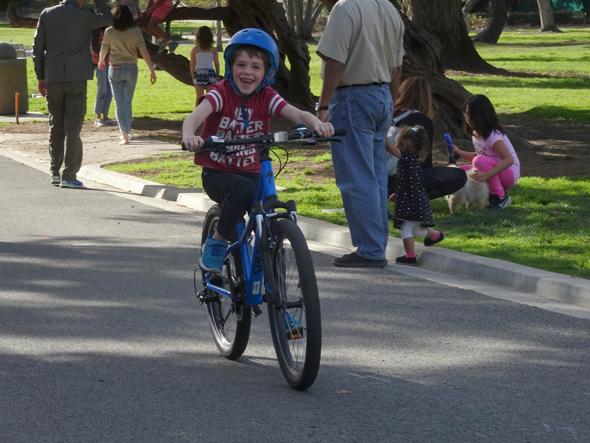 We went to dinner and decided Lucy would come back to the hotel with us for a sleepover as Leo had Hebrew School in the morning and Lenny needed to be at the new house to meet with some dudes about some cabinets. At the last minute, Lucy decided she wanted to stay home. Okay.

Lucky (for Dave and I) she did too, because starting at 3a, Lucy started vomiting and didn’t stop until Lisa finally took her to the emergency room! The doctors had to hook Lucy up to an IV to get some meds into her teeny little body to stop the vomiting and rehydrate her. Poor thing! The medical staff thought it was food poisoning, but later declared it a “virus that is going around” the area. Lenny drove Leo to class, Dave and I fetched him, went back to their new house (under construction) for a while, went out to lunch with Lenny and Leo and finally Lucy was released from the emergency room. She dozed on the sofa until 4 o’clock, and is feeling better. Thank goodness!

Dave and I drove back to Indio, reaching our campsite just as the Ducks v Cougar basketball game tipped-off. I made a pizza and we watched the Ducks win. GO DUCKS. 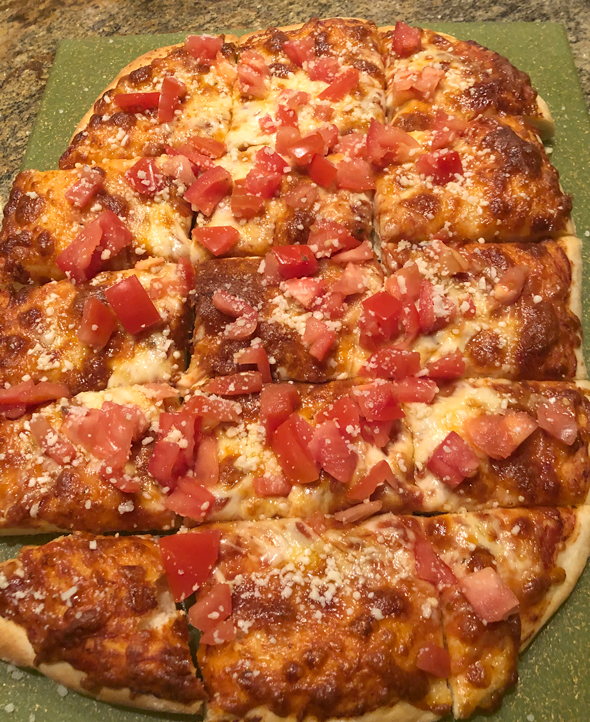