Indio, California: I woke at 5:30 this morning. Probably my internal alarm clock, tallying-up all the things on my to-list, working subliminally inside my little brain, rousing me from my cozy bed. Get up, girl. Get to work.

We had a concise plan today. It was good I was up early too because my (RV) printer suddenly decided to no longer like my new Windows 7 operating system and went on strike. I had to download a new driver. Fun times.

So after exercising, working, email, installing new software and showering, we were ready for the plentiful list of tasks on our schedule today. Pretty much, someone had to be here at all times, to receive deliveries or repairmen. Late this morning, I stayed at the RV to wait for the patio furniture delivery. DT headed off to purchase a television.

I am positive that in our 30+ years of marriage, this was the first television DT has ever purchased. There is the distinct possibility that during the years he was working, DT may have never actually stepped inside a retail establishment.

But not by much.

While he was away, the patio furniture we ordered last month was delivered. 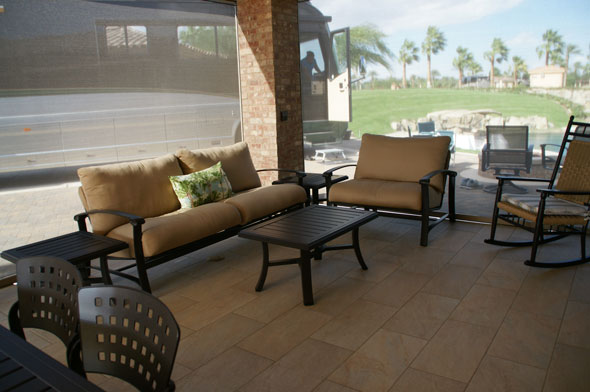 The sofas you have seen. Today the coffee/side tables were delivered, along with two rocking-swivel chairs for the around fire pit outside. We don't have much space, so are pleased with our "small" furniture.

If you look at the palm trees in the background of the above photo, you will understand why I had the wall screen in their "down" position. Winds were up to 55mph gusts this morning! I was having a bad hair day. It is amazing how much the screens cut-down the wind. It is amazing how little the screens cut-down the dust. Within hours, our beautiful new dining table looked as if it had been unattended for years. We had hired a crew to clean inside and outside our motorhome this morning. Only the inside job showed. It was too windy to wash a RV today. 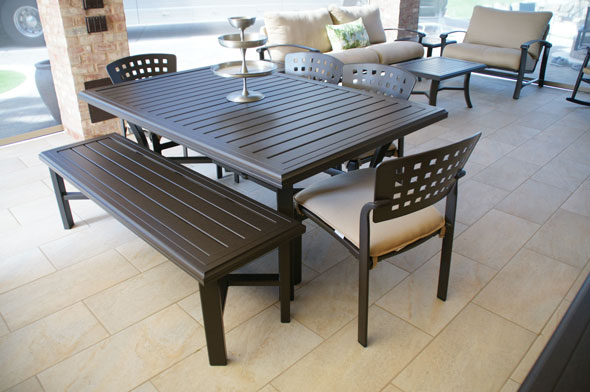 We ordered a rectangular dining table, four chairs and a side bench. All the furniture is made by Tropitone (in California!) and is care-free, light-weight aluminum.

Another piece of furniture delivered this morning was the all-important "serving" cart, which I will (from now on) refer to as "the bar". 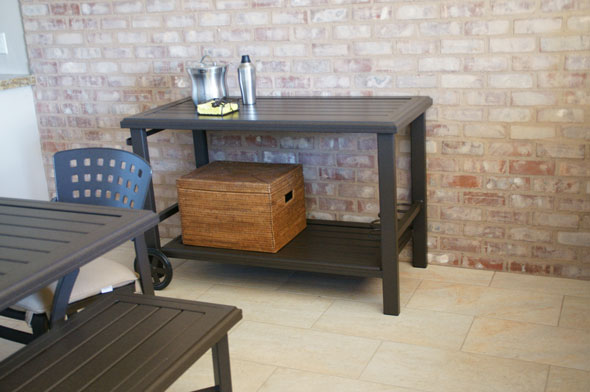 I'd get my drink on, except I didn't make it to the store to buy booze

As DT returned with a monster 60-inch television, I headed out to buy a wholelottastuff at Bed, Bath and Beyond... for which they rewarded me with a coupon for 20%-off one item.

When I returned from Bed, Bath and Beyond, DT was repackaging the 60-inch television to return the beast to the store. Though the television opening had been measured and re-measured and the purchase had been discussed several times with our contractor and his crew, the TV Dave brought home from the store was too thick/deep and would not fit into the space. Seriously??

Back he went to the shop, only to return 30 minutes later with a thinner version, but only a 55-inch version. Still, this television is the largest we own. Surprisingly enough, it is also the least expensive television we own.

Pretty soon, TV's are going to be free.

Arnold's crew was able to successfully get the second television to fit into the space. Now, if I can figure out how to rig it up to the satellite TV via our RV tomorrow, we will be in business. Ducks v Cal Bears. 7:30p Saturday. ESPN. Be There.

I was running my BB&B purchases through the washing machine and dishwasher all afternoon. Friends and neighbors dropped in to see our new casita. The Culligan man stopped-by to test our water and make sure we were enjoying life after hard water. Thanks Culligan Man!

Amazon.com only delivered once.

Suddenly it was five o'clock. Dark. I never did make it to the supermarket and after the crew left, we realized we had not eaten all day. My head was pounding from some-sort of sinus thing, most likely due to the wind blowing the sand/dust around - or possibility starvation.

Enough was enough. We stopped what we were doing and went to a local Mexican place for margaritas and sustenance. After dinner, I finally made it to the supermarket. (Did you know? At 7p, a supermarket is virtually empty? Awesome discovery.)

More chores await us in the morning, but in the afternoon, we will be visited by a certain little nieto we adore. Seems he wants to watch the Cal game with Grandpa.

« Home Away From Home Weekend Visitors »