Track Town, USA: We headed down to spend a few days - in our motorhome - in Eugene. Big Football Game this weekend against the University of Arizona. GO DUCKS! The game is Saturday, 7:30p pacific, on ESPN.

Just moments after we arrived and set up "camp" at the Premier RV Resort, our tech, Brian Van De Walker (of Coach Solutions, 541-514-9000), arrived to tweak a few things on the Magna Peregrinus. He also added a cable that will somehow run from the satellite television system on our roof to the TV (we will be buying one day soon) in our casita at the Motorcoach Country Club in Indio, California. I'm not sure how this situation works, but I assume Brian does because Brian knows basically everything about this bus - and probably everything about your bus as well. 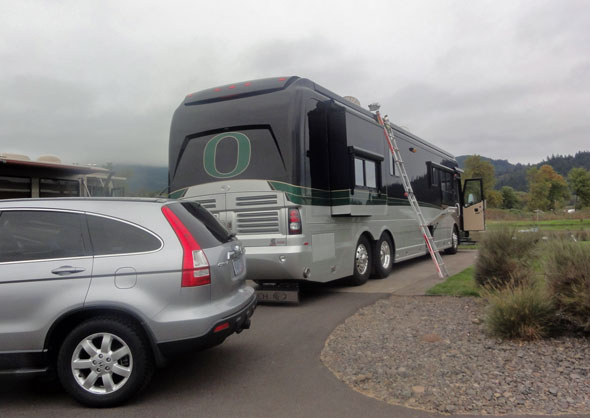 Guess what happened last night in the Willamette Valley? It rained! It has not rained for such a long time, that the odd noise woke me up in the middle of the night. And the rain stopped before we headed south, so our newly-washed RV still looks newly-washed.

We came to Eugene a day before the game because DT was inducted into the University of Oregon Athletic Hall of Fame tonight at a gala dinner! GO DT! Dave is going in with his fellow teammates on the 1973 and 1974 NCAA National Championship Cross Country teams. Little bit of trivia: the University of Oregon holds 19 National Championships, and 18 of them are in track or cross country. (The other is the 1939 men's basketball team - the Tall Firs.)

Anyway... this may help you all to understand why we are still in Oregon and not on our way down to the desert to get organized for Lisa's wedding. A huge night for My Driver and his teammates. It was a huge crowd too, because NIKE co-founder Phil Knight was also being inducted, along with Duck football stars Joey Harrington and Chad Coda, and softball standout Kim Manning Strahm. Three national championship men's cross country teams were inducted into the Hall of Fame tonight - 1971, 1973 and 1974. Since over 500 people came to the dinner, it was held on the floor of the new basketball arena.

So many of the runners returned to Track Town USA for the induction ceremony. Everyone was given a framed certificate and a boutonniere before being led onstage to receive recognition. Pat Tyson (above, speaking) represented the 1971 team and said a few words. Famed Oregon runner, Steve Prefontaine, was represented by his sister, Linda (in red, left). 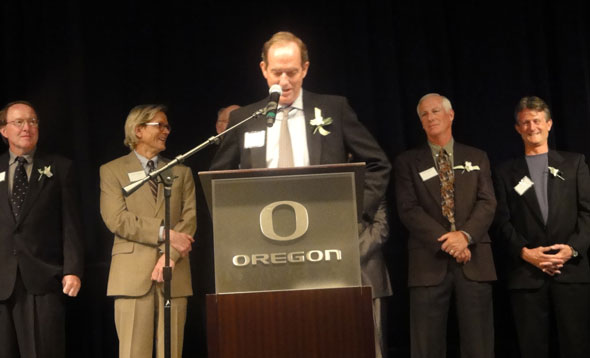 Dave gave most of the credit to their coach, Bill Dellinger (second from left) and told a few stories from back in the day. 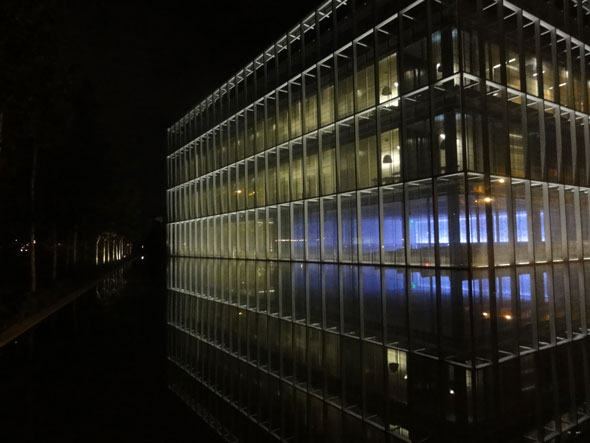 After the event, we walked back to our car through the pretty University of Oregon campus. We can't thank Kathy, Woody, Steve and Mary enough for attending the dinner with us tonight. It was a great evening and I am so happy the cross country teams received this long-deserved recognition!