Not us. We are home. But today Lisa, Lenny and Leo flew from Los Angeles to the east coast to spend the 4th of July weekend with Lenny's family. Lisa stressed about the flight with a near-two-year-old boy. She planned. She plotted. They read airplane books to Leo for a week. She used every trick in her Official Book of Motherhood to make sure the other passengers would have an enjoyable flight as well.

Lisa once read about a Mom & Dad who fashioned little "gift bags" to hand-out to people on a flight - kinda an "apology-in-advance" bag with candy and ear plugs - in case their twins were a terror on the flight.

Last night we facetimed/video chatted with Little Leo. He was practicing using his iPod (!) and headset for the plane trip. Seriously. The 23 month old could figure it out too! He could put on his headset and turn-up the Raffi. Leo's head was boppin' away to the tunes.

Lisa lets him listen to music all the time. His TV time, however, is severely limited. Like none - save Washington Redskin games. Lisa downloaded several episodes of Yo Gabba Gabba onto Lenny's iPad for the plane ride. She also purchased a few snacks that Leo had never seen/tasted before. Let's be honest - she packed some junk food for her Organic Baby. 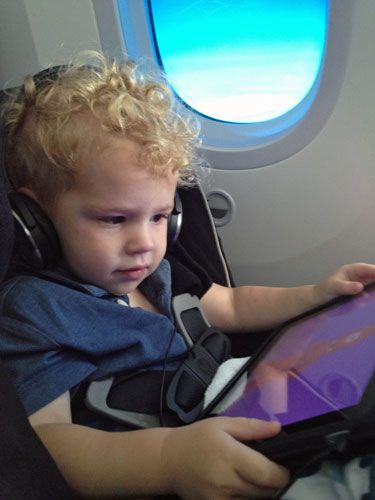 Lenny sent this photo to me via text message. This little boy isn't two years old, yet he is making use of the latest technology... not to mention he is flying in a jet plane at 500mph across the country. 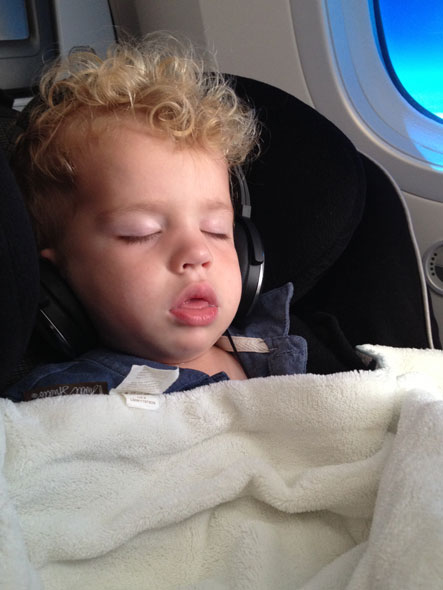 Was it the roar of the engines? Yo Gabba Gabba? Junk Food overdose? Smart Mama?

To all My Readers - Happy Independence Day! As I type this, a pack of coyotes are behind our house - howling - probably due to the fireworks noise coming from town.

It's going to be a long night.

Until my next update, I remain, your quiet correspondent.