Dave and I drove two hours for dinner in Eugene (and drove home after!). The event was to kick-off the World Junior Track & Field Championships starting tomorrow at Historic Hayward Field and to welcome the IAAF (International Association of Athletics Foundation) dignitaries in town for a council meeting - and to impressive them by showing off the track, the city and the community. Over 160 nations have sent athletes to Eugene this week for the World Junior Championships. (A "Junior" is an athletic 16, 17, 18 or 19 years of age on 31 December 2014.)

IAAF President, Lamine Diack of Senegal, spoke to 200 guests at the banquet in the Club Room at Autzen Stadium at the University of Oregon. Next, Oregon's cowboy-boot-wearing Governor, John Kitzhaber, greeted the room. 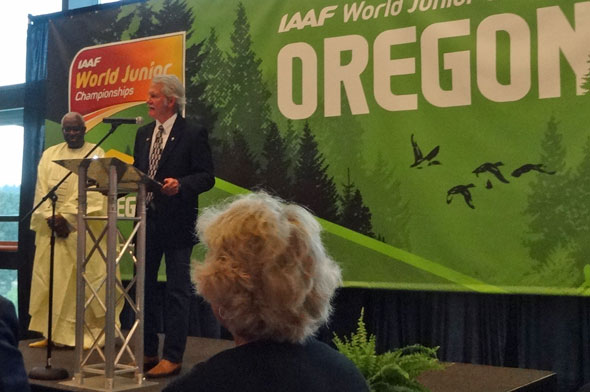 Later, they fed us and there was a lot of table-hopping and catching-up with old cronies. The room held the "Who's Who" of the track & field organizing world. The fastest man in the world can't race unless someone puts-on a meet. 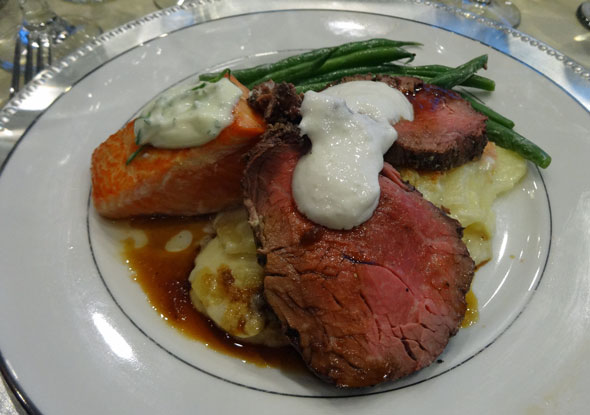 I know the dignitaries were impressed with wild-caught Oregon salmon and roast beef with au gratin taters and green beans. Yum! We were also served a roasted beet and goat cheese salad, and pastries for dessert. 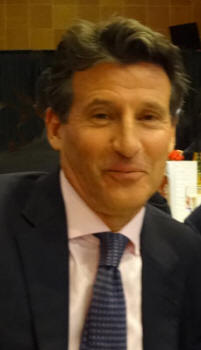 For some reason, Sebastian Coe was seated at our table. Poor guy probably wondered what he had done to offend the seating chart people - but there he was. Lord Coe had a brilliant career as a miler for the United Kingdom, then entered politics and was a member of Parliament for five years. Lord Coe was in charge of the 2012 Summer Olympics and is currently Chairman of the IAAF Press Commission. He was quite polite, interesting and funny.

Everyone had a great time at the dinner, but DT and I left right after the meal as we DT had to drive two hours north to our home and comfy bed.

Best way to keep My Driver from falling asleep on the way home? Turn the satellite radio to Radio Margaritaville and sing-along to Jimmy Buffett for 110 miles. It's not like I don't know every word to every song. Dave did not fall asleep all the way home nor drive us off a cliff, but is barely speaking to me.

Until my next update, I remain, your socialite correspondent.