I Can’t Leave the Garage

I had yet to drive my new car, except for a quick spin up the road upon delivery. We went out to dinner Saturday night (with Renee and Nancy), and DT drove the new car. This allowed me to play with all the buttons, set-up my cell phone, GPS, plug-in my music (300+ Jimmy Buffett tunes on a flash drive!), and generally get acquainted with the electronics. After dinner, My Driver slid the new Jeep into a bay of our garage.

Fast-forward to this afternoon, when it was determined I would drive the car to New Seasons Market to purchase food for the next few days. DT wanted to accompany me, but I was finally going to drive my new "wheels".

Car started. Car placed in reverse. Car backed up one foot... and then all sorts of beepers started going off. The Jeep must have been too close to the frame around the garage door and (apparently) in danger of crashing. Thank you for the warning, Dear Sweet Jeep, but I backed a Suburban in/out of this garage for ten years without incident - and pretty-much feel this little Jeep won't be a problem.

The Jeep put on the brakes herownself! Would not let me reverse. Stopped! The car thought there was something either behind the car (did not see anything in the 8-inch back-up camera screen), or next to the car, that I was about ready to smack.

Not gonna lie. I left the driver seat to check behind the car. Maybe someone had left an unseen package. Maybe George Clooney was laying around in the driveway. Nothing.

I turned the car off, restarted and tried again. NOPE. Brakes slammed again. The car would NOT let me leave the garage. We finally decided it was because the car was so close (at least a foot!) to the garage door opening. (Can I blame My Driver for his parking job last night?) After re-re-starting, and turning the steering wheel enough, the car finally allowed me to exit the garage.

Thank goodness I wasn't in labor.

The drive to the market was good. The Jeep is so quiet compared to the rattle-trap Honda. The bumps on our old country road were barely noticed. It was too easy to go over the speed limit though - with such a smooth ride, a person may not notice they are going 50 in a 45-mile-per-hour zone. The Jeep is larger than the Honda! It will take me a while to get used to the "girth"... and hopefully I will learn the ropes to getting out of my own garage! (Just in case, there is a way to temporarily disable the impending-collision mode. Whew.)

It will also take a while to get used to the car engine turning-off when stopped at a red light.

I maneuvered into a parking spot at the grocer. A few warning beeps sounded, but the car did not lock-up the brakes. Progress! A button was pushed and the rear hatch opened so we could retrieve our shopping bags. Fancy! 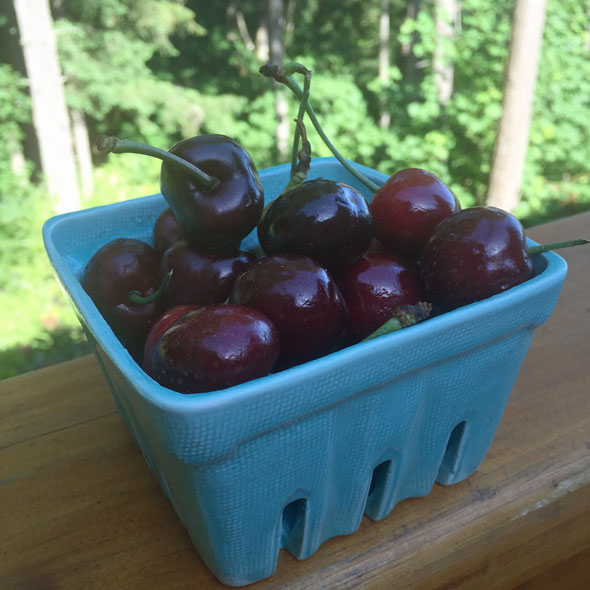 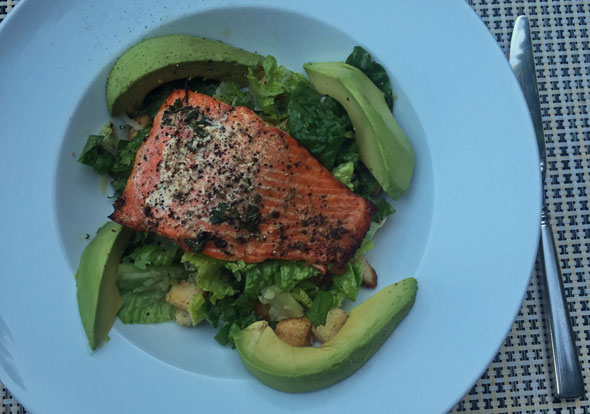 We were looking for a little salmon to grill to serve over a Caesar salad. New Seasons Market offered a special wild-caught sockeye, marinated in a lemon-pesto for only $12.99 per pound! DT grilled it to perfection and I made the salad (using frozen lemon juice from Mary & Captain Jim's garden). Along with sliced avocado and incredible Rosemary & Kalamata Focaccia from the bakery - our evening meal was very enjoyable. 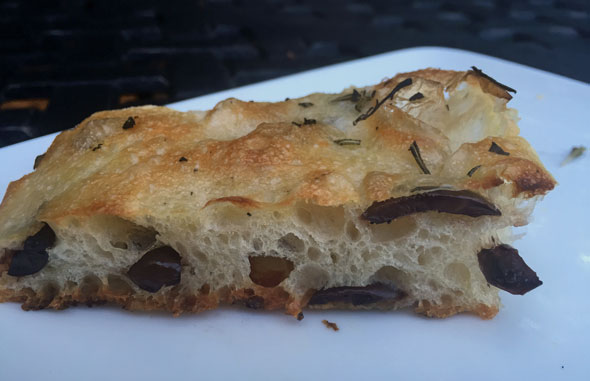 Hopefully we will get the hang of exiting our garage soon - until we do, please enjoy this little chuckle at my miserable expense. Until my next update, I remain, your challenged correspondent.
« It’s A New Car! Greeting from SoCal »