Indio, California:  The kids just spent three days with us. There has been a lot of playing, a lot of cooking and no time for blogging. The weather mostly cooperated. 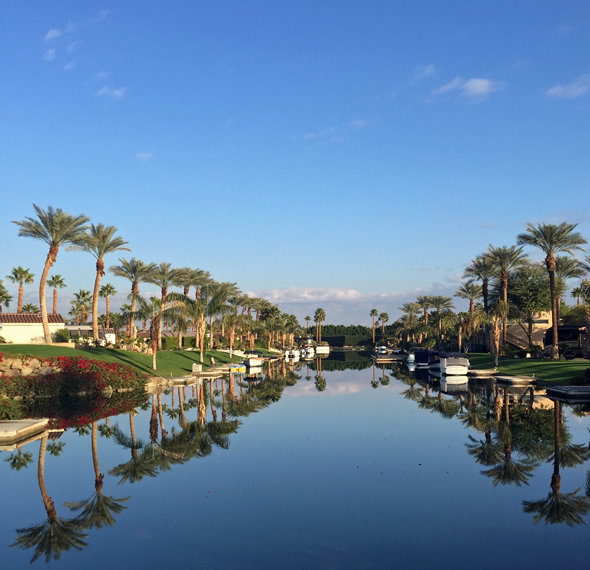 They left a very rainy Los Angeles and arrived to this pretty sunny day. Leo brought his bike. Lucy brought her scooter. The kids enjoyed our low/non-existent trafficked streets for hours. 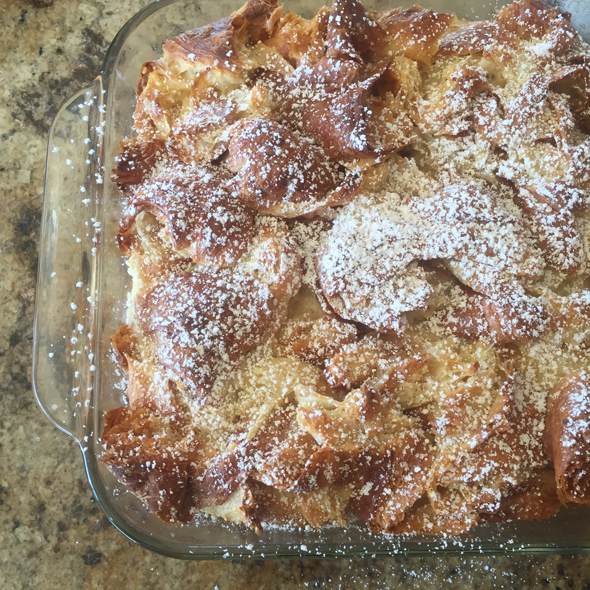 Brunch was ready when they arrived. After several attempts, I am now happy with the results and will soon publish an easy (make ahead) and delicious Eggnog Bread Pudding recipe. I tried the idea first with commercial eggnog, but that stuff has way too many ingredients/chemicals. It is best if made from scratch. And this bread pudding is really best if made with a splash of bourbon... which I did not add for the kids, of course. 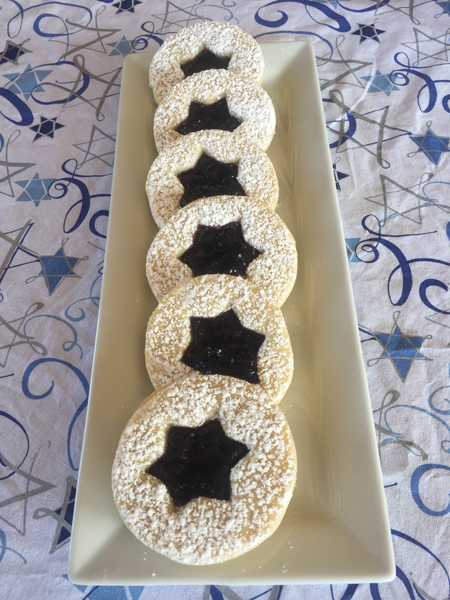 Our grandchildren had a few Hanukkah cookies as well.

As the sun set, we lit the menorah. The last night of Hanukkah is my favorite. It means latkes and the menorah is so pretty with every candle lit. 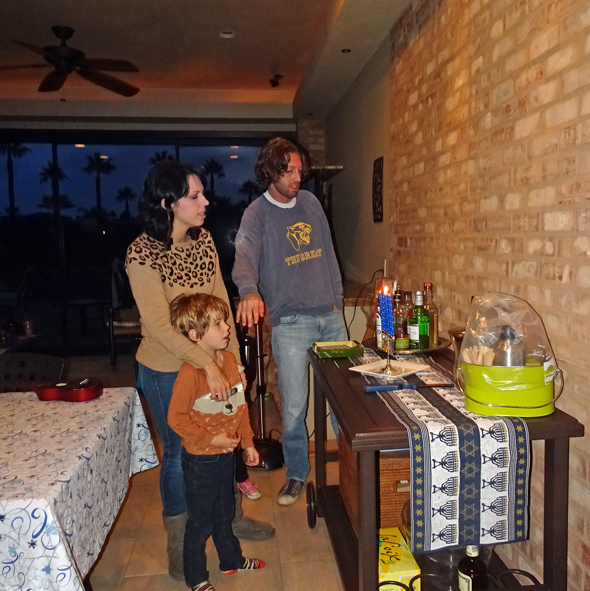 Latkes were served a few hours before dinner, because on New Year's Eve we eat Fettuccini Alfredo... probably one of the most fat-and-calorie-and-carb-laden food item on earth. Just the thing before the January resolutions.

We had planned S'mores for dessert, but just as we went outside to light the fire pit, the sky opened and it began pouring buckets. No matter - DT braved the elements between downpours and delivered smishy-warm marshmallows to his grandchildren. Happily, his grandchildren can't yet tell time: we celebrated the New Year at 9p pacific, via CNN, as the ball dropped in Times Square in New York City. Shhhhh. 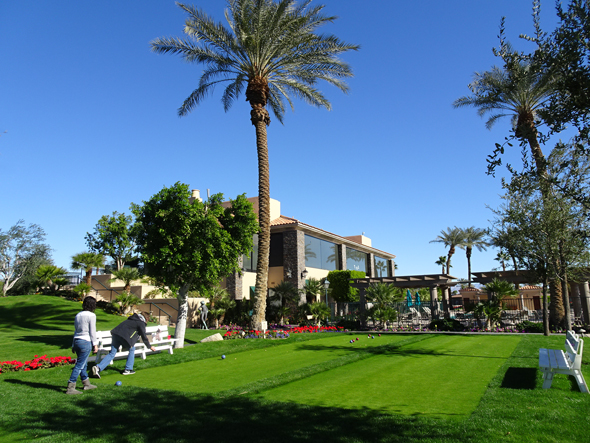 The Motorcoach Country Club has four Bocce ball courts - nestled between the clubhouse, pool and tennis courts... and adjacent to the practice putting green. When not playing Bocce, we could try our putting skills. As you can imagine, a two-year-old is very helpful at a Bocce tournament. Lucy figured-out we were trying to roll the Bocce balls as close as possible to the white jack ball, and would simply move the ball for us. Scoring may not have been official, but Lenny won. 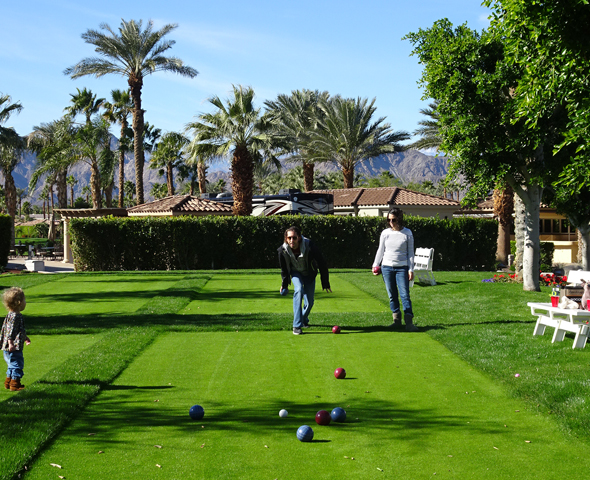 After the tournament, I took Leo to the pool and watched him dive and swim, and go back-and-forth between the pool and the hot tub.

Sunday was pizza night - and Leo made a special salad for everyone: Little Gem lettuces with a creamy vegan dressing, radishes and pistachios. 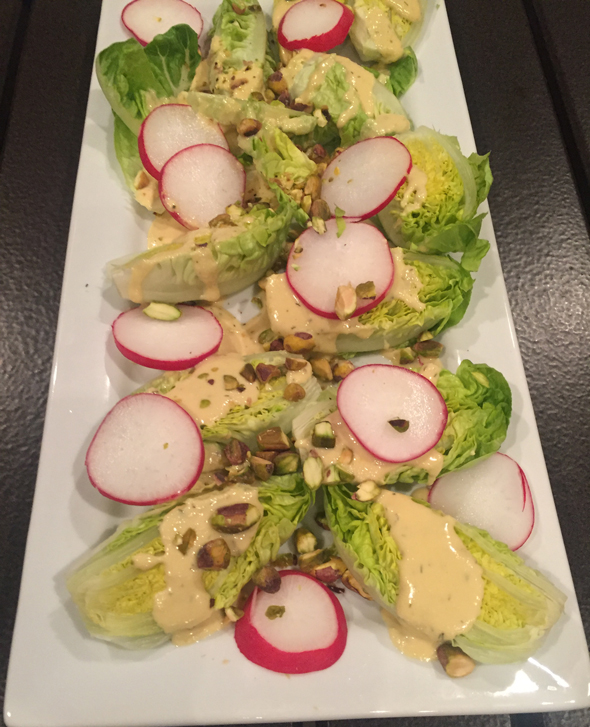 Though this morning brought clouds, it was warm. Lenny and I took Leo and Lucy to the pool while Lisa packed and DT made the casita tidy again. Leo loves swimming!

Later, the kids left and took Reese back to LA with them. We started washing linens and cleaning-up and then settled in to watch the Rose Bowl.

Dave and I wish you all a fun and happy 2017, filled with love, good food and travel. Happy New Year!

Until my next update, I remain, your pet-free correspondent.