Bryce Canyon National Park, Utah: Not gonna lie. My calves were really sore today from our big hike yesterday. Walking down stairs or down hill was pure agony. DT was suffering from hip pain. We are too old for this stuff.

Our adventure today involved not so much hiking, but a lot of driving. We worked this morning, finished-off that lovely Turkey Lasagna, and then headed out on the Scenic Highway 12 Byway to Boulder, Utah (and returned along the same route). Our first stop was still in Bryce Canyon National Park - and just a short hike to see a waterfall and Mossy Cave. 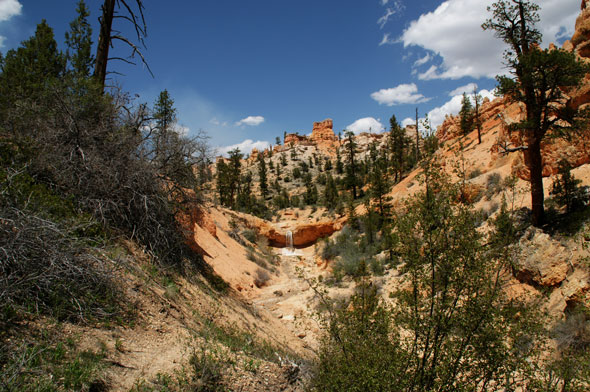 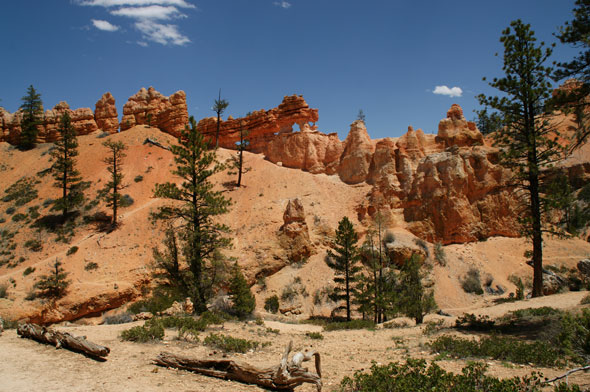 The waterfall is in part of the irrigation system built by Mormon settlers in the 1880's. They used naturally- occurring channels whenever possible. 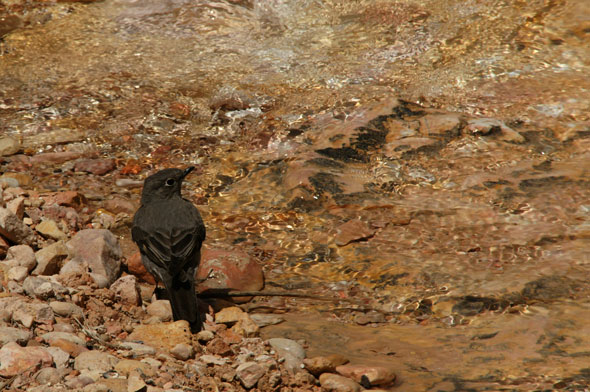 Bird having a drink from the creek 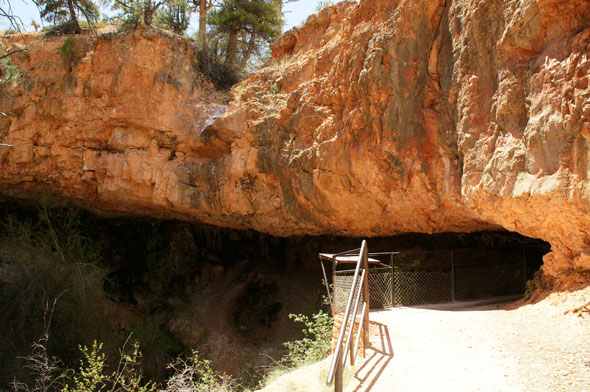 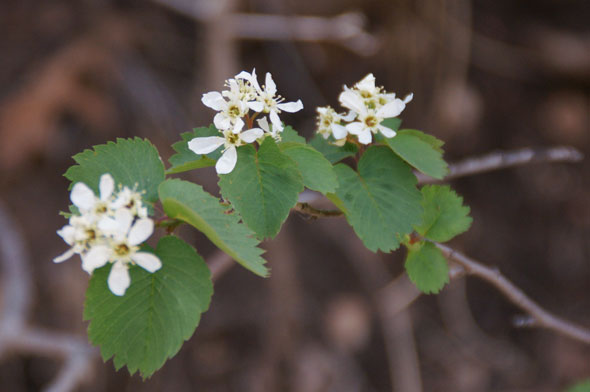 Pretty flowers - not sure what, but remember from college they are in the rose & strawberry family. 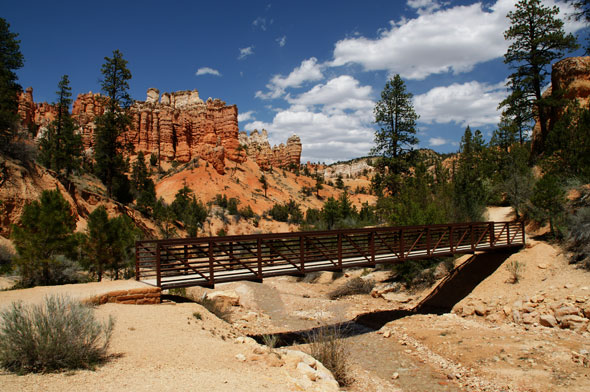 Mossy Cave is a great and easy hike - we weren't here for an hour. Great for kids too, with the creek, a waterfall, bridges and a cave! Restroom at trail head.

At a stop to the Escalante Visitor Center in Cannonville, we picked-up a great guidedetailing the stops and points of interest along Scenic Byway Highway 12. The route, one of the most beautiful in America, travels through several small communities founded by Mormon pioneers. 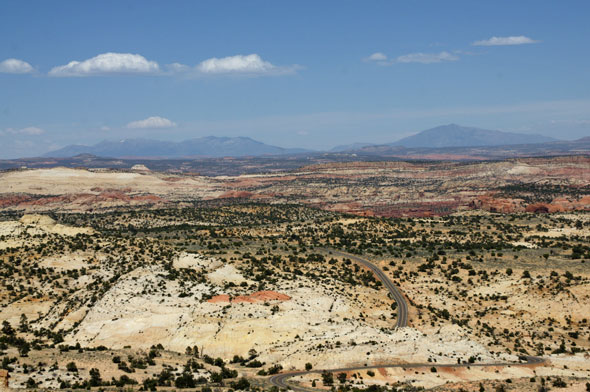 Escalante National Monument begins a huge staircase down to the Grand Canyon. Bill Clinton declared these 1.9 million acres a National Monument in 1996, using theAntiquities Act founded by Teddy Roosevelt in 1906, and started a fire-storm from Utah Republicans who called him a "land grabber", as they wanted this land for coal mining, etc. 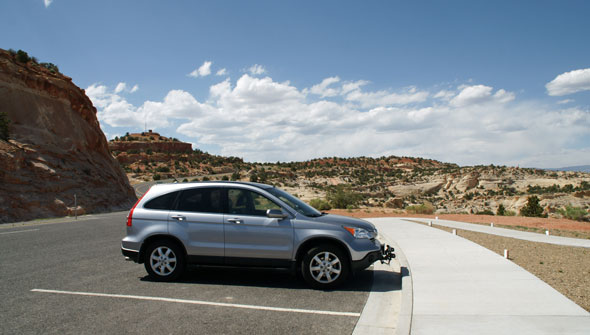 Remember our old 2007 CRV? This poor thing has been dragged across the country behind our motorhome countless times, yet she still rumbles along, starts every morning... though she is noisy on the freeway, rattles a bit and has a hum in the back speakers. 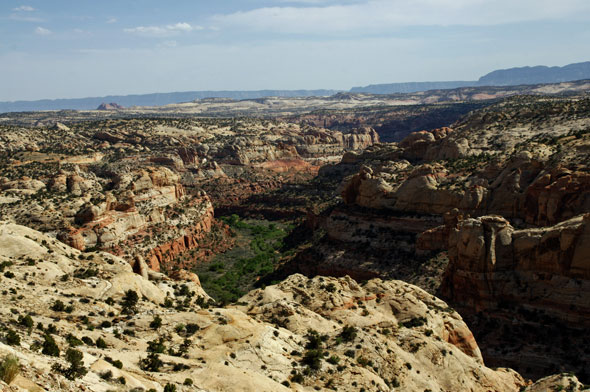 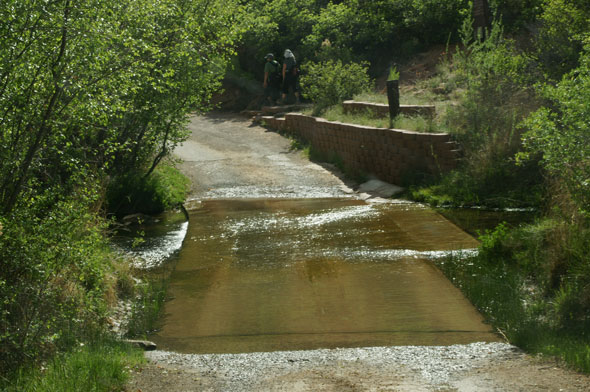 We crossed Calf Creek and lived to tell the tale

Dear Reader, I googled, but can't figure-out why a high school in Escalante, Utah has the mascot of an Native American tribe from Arizona. 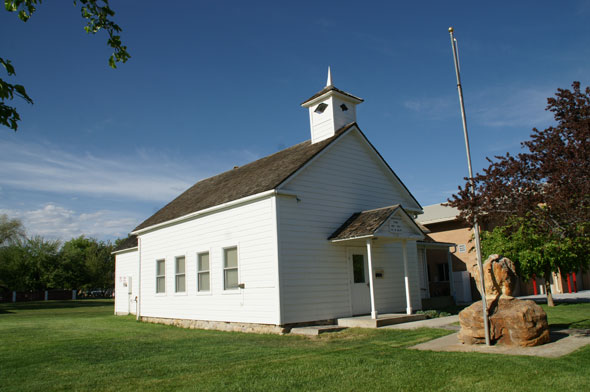 Another little settlement along Highway 12, Henrieville, has an old school house built in 1881 of rough-cut timber. It is now the town Senior Center. Henrieville also has the lore of a local character, Elijah "Lige" Moore (1850-1944). Years after Butch Cassidy was believed killed in Bolivia, neighbors recall meeting Cassidy at Moore's Henrieville home.

Powell Peak, named after famed one-armed explorer John Wesley Powell (like about a zillion other things in this area) was visible during much of our drive this afternoon, and we also traversed the famous Hogsback. 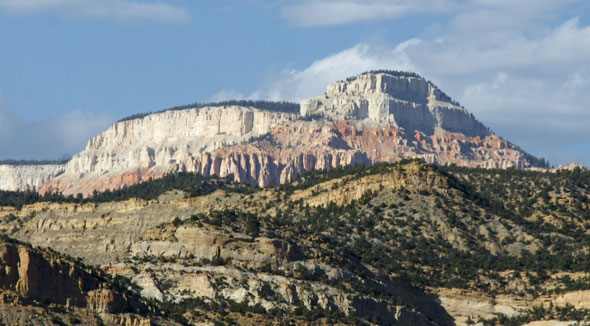 We didn't return to our motorhome until 6 o'clock. The sun was bright and it was still warm, so we walked into town to see what we could see. Mostly we saw tour buses and a bunch of junky stuff for sale at gift shops, but it was a good walk and another way to stretch-out our sore hiking legs. I am sorry to report, today I did not meet my 10,000 step goal. Even with a little hiking, traipsing around the scenic byway and walking into town, my pedometer is barely over 9000 steps.

Fail. Loser. I cooked tonight. I had that lovely lamb chop (and roasted carrots) leftover from our dinner last night at the Park Lodge. I had shallots, garlic and mushrooms. I had sherry... so thought about risotto (I had Arborio rice). But then I thought about how long it takes to cook risotto at sea level (40 minutes!) and we were at 9000 feet elevation... so I thought it could take up to an hour to prepare risotto. Then I remembered the packet of 10-minute Farro from Trader Joe's in the pantry! Brilliant. Shallots and garlic, sauteed in olive oil, add sliced mushrooms, finish with sherry. Half-cup of the farro cooked in one cup of chicken stock, then the minced left-over carrots and chopped lamb added at the last minute. Twenty minute dinner - and even though I only used a half cup of the dried grain - we will have enough for another meal! Those two lamb chops are feeding five servings! 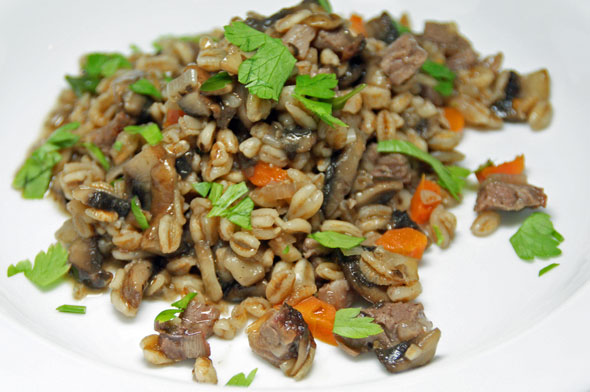 The parsley is from our garden in Indio!

Until my next update, I remain, your antiquified correspondent.

RV PARK: Ruby's Inn RV Park & Campground - We have a long pull-through with 50 amp, water and sewer. Bathhouse, laundry, store, pool, hot tub and nearby to shops, restaurants and all sorts of other tourist needs. Only a half-mile from the entrance to Bryce Canyon National Park. They have recently added many more full hook-up campsites. With tax, etc., we are paying $47.11 per night.