I've had better days, but at the end of this day my new car is ready to tow and we had a great meal. The process, however, was not so much fun.

Dave and I were up with the sun this morning. Our appointment at the Wilsonville (Oregon) Camping World was for 8 o'clock - in the morning - and the presence of the motorhome, the new Jeep, and our checkbook was required. Our original plan was to go over last night and camp in their parking lot, but sleeping next to the interstate seemed very unappealing and we switched our plan to get up early, go fetch the bus and get to Camping World as they opened. This plan was brilliant (except for the whole waking-up-at-five-thirty part). No traffic at all and we were at Camping World by 7:30a. 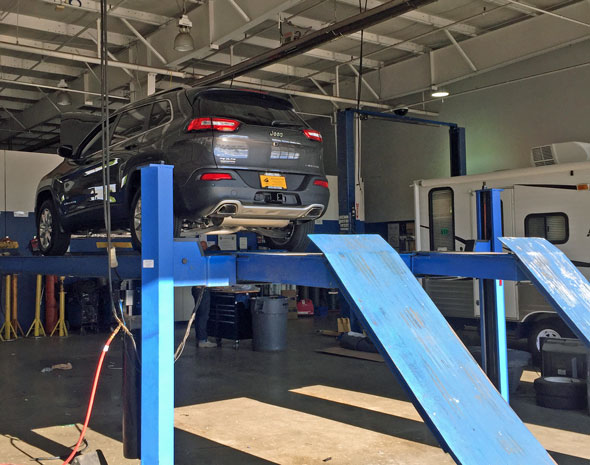 The staff put the Jeep in a service bay and asked us to move our bus to a shady spot nearby. 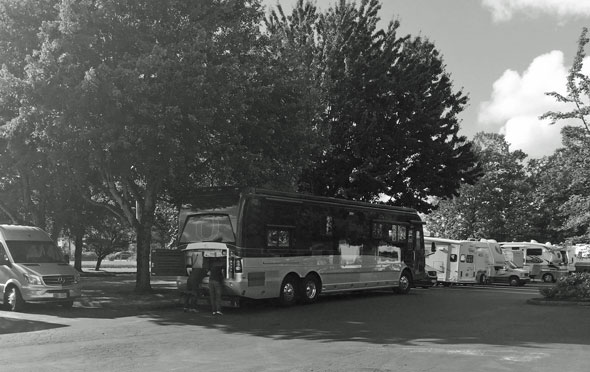 How long will it take? Most of the day.

What? I had a hysterectomy in less time.

At least they allowed us to hang-out in our motorhome all day instead of their waiting room. And by "hang-out", you know I mean napping and needlepointing right? 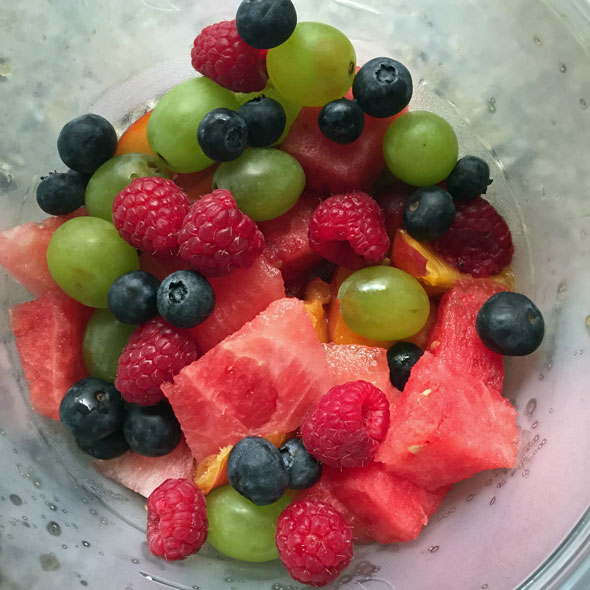 I had brought fruit for our breakfast, not realizing we would be at Camping World through lunch and nearly dinner.

Just after three o'clock, the service tech said he was ready to pair-up the vehicles. Our old tow bar was fastened to the newly-installed car brackets, the 6-pin wiring harness was plugged-in, and we were happy to see the turn signals, brake lights and headlights worked perfectly! Good to go.

Not so fast, Grasshopper. 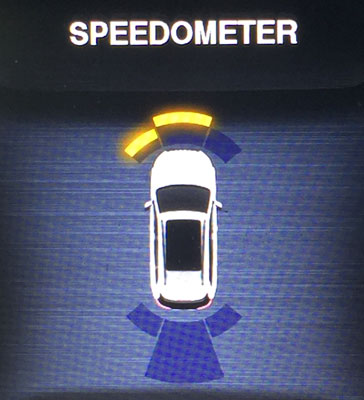 As warned by (oh my goodness, this guy always has my back - is there a nicer guy than) Captain Jim, the parking sensors on the front of the car did not like the tow bar. The "park assist" sensed the tow bar as something I was about to ram. Beep. Beep. Beep. As shown the photo, right, yellow lights flash on the dash and beepers sound when the car gets a little too close to another car, person, grocery cart, etc.

This will not be an issue. If we ever drive the car while the tow bar assembly is attached, there is a button on the dash to disengage the "park assist"... and, let's face it, I have been driving for 45 years with only one minor little teeny parking lot mishap without a beeper telling me I am about to bump into something, so suppose I will be alright. 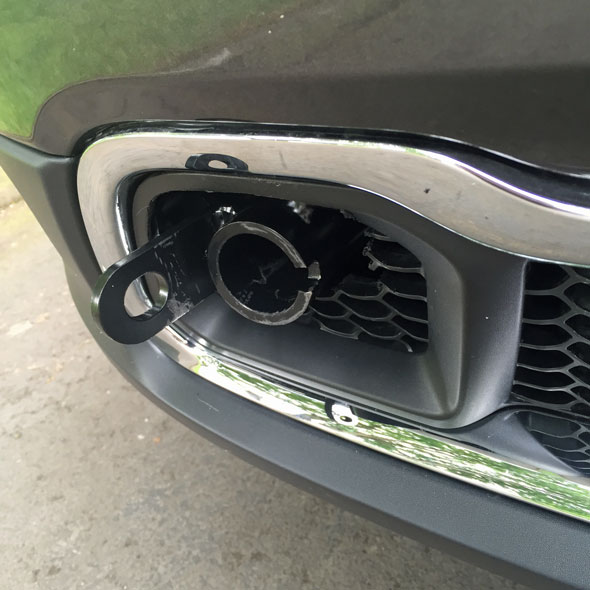 Everything was going so well. The tow bars were removed and DT was about to go inside the shop to pay our tab when I realized the parking sensors were not working. Hmmm. I tried simply re-start the car. Maybe the car still knew about the now-removed tow bar?

The dash showed a warning signal reading the sensors were not working and then the park assist system turned off byitsownself! Then a warning alarm appeared suggesting the sensors needed to be wiped-off/cleaned. When I stepped out of the car, I immediately noticed one of the sensors was missing.

The system was working perfectly at 8a when I delivered the car to Camping World. I asked the technician if the sensor had been accessed/removed for any reason while he was down there installing the brackets and wiring. He said the sensors were never touched and they had nothing to do with the tow bar installation. Okay. Since it was missing, I asked if I could go look around the bay where the work was completed. He helped me scrounge-around (oh my gosh is there a lot of stuff down there). No sensor found.

The tech felt I was accusing him of something. I was not. I was 100% polite the entire time, but he felt threatened enough to go fetch his supervisor. I explained the sensor was there when I brought the car in this morning and now it was missing. The tech suggested I was wrong. I suggested I was not wrong. The supervisor suggested since the bumper panel housing the sensor had been removed during the installation, possibly the sensor had fallen and was "down there somewhere"? The tech fetched a tool, re-removed the panel and - voila - the missing sensor was indeed dangling with its wires still attached. The tech snapped it back into place and we were good to go. The tech and I parted with a friendly handshake, but I still did not like confrontation. At all. 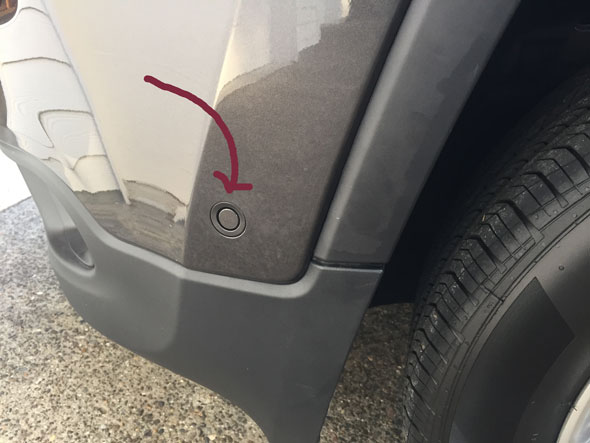 Nearing rush hour, traffic on I-5 was completely stopped, so we decided to take the back-back-back route home... which conveniently carried us past The Dundee Bistro.

We were starving! Fruit was all we had eaten all day. Arriving just before five o'clock, we had our pick of tables at the bistro, enjoyed a much-appreciated glass of Ponzi rose and delicious meals. Early Bird Special, late lunch or early dinner, you decide. Either way, our dining experience completely made up for our crappy day, and it didn't cost $1200. 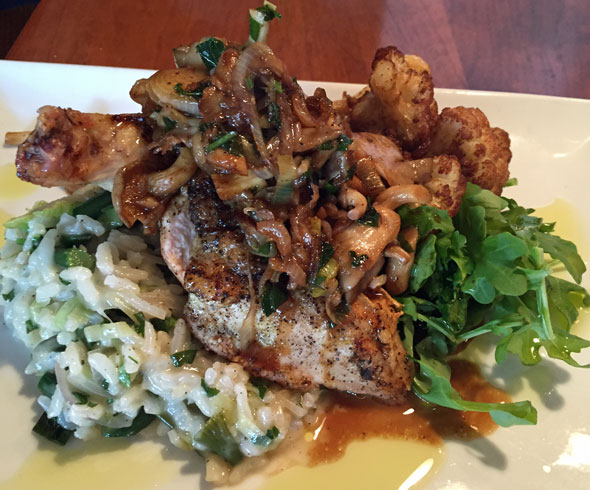 DT ordered chicken (it is Shabbat!) with mushrooms and cauliflower over risotto. 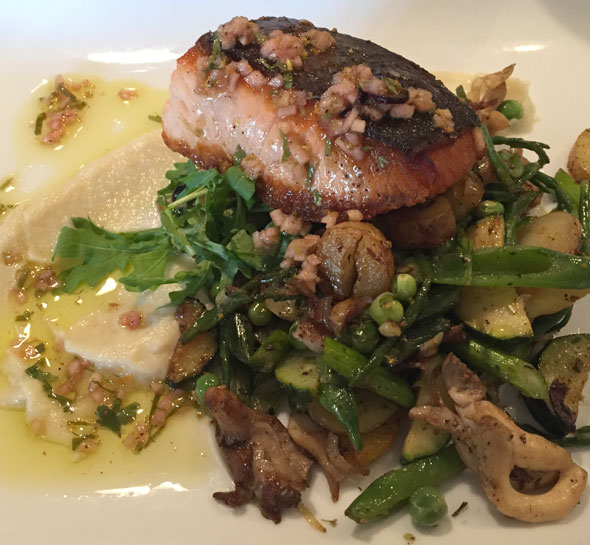