Union, Oregon: What? Are we still in little Union, Oregon? Can't help ourselves - we are having so much fun.

Do you remember a few months ago when we went to Mariner Spring Training in Arizona? One afternoon at a baseball game, we talked to a guy who had a booth set-up in the stadium concourse advertising Buffalo Peak Golf Course in Union, Oregon. He gave DT a coupon for a free round of golf with a cart! That coupon has been in our bus since March and today we cashed it in! We played 18 holes, with a cart for $44 combined, on a fabulous links-style course in the middle of nowhere. Spectacular. 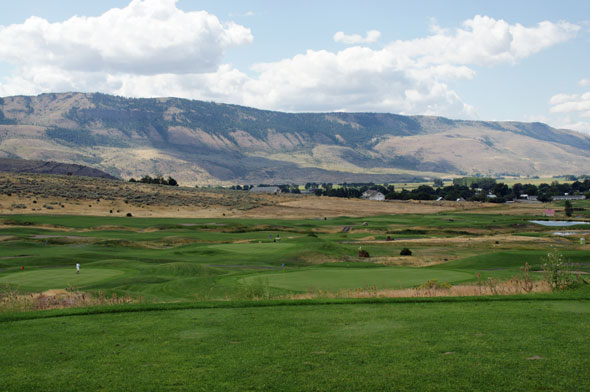 Buffalo Peak Golf Course is laid out so the first 9 holes are around the perimeter and the back nine are situated in the middle. It was a surprisingly difficult course. We were not paired with locals today, which was unfortunate. We could have used a little guidance on a few holes - sometimes it was a bit difficult to determine which green was where/what! 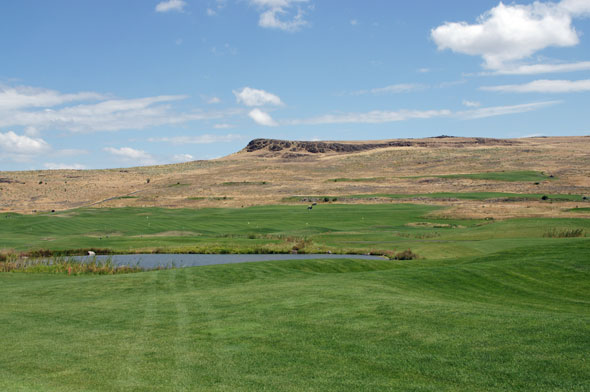 This is Buffalo Peak. Local lore says Native Americans used the peak as a buffalo jump. 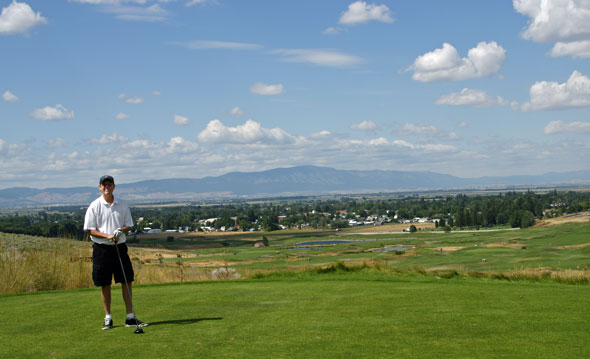 From the upper tee-boxes, views are to the beautiful Grande Ronde Valley, and the town of Union. Upper is an understatement. The course is so steep, the golf carts are not electric - they have gas motors. I can't remember the last time we used a gasoline-powered golf cart. It was crazy steep - but look at the views!

After our round (which we finished in just over three hours!), we came back to the RV park for a long soak in their (very) hot tub. So relaxing and soothing. Then we headed into La Grande to see what we could see.

Only seven miles from our campsite, La Grande (pronounced La Grand) has a population of about 13,000 and is, of course, historically caught-up in the whole Oregon Trail, gold mining, cattle, railroad story of Oregon. We did a driving tour of the many huge old (perfectly maintained) historical mansions on the hillside of La Grande.

Foley Station, a steak restaurant set in - what else - an old historic building) is one of the most popular spots in the entire valley. But, we didn't want dinner - just a snack and a cocktail, so sat in the pretty bar at the back of the restaurant. However, we soon learned tonight was "sushi night". What? Seems the chef makes sushi once a month and tonight was the night. 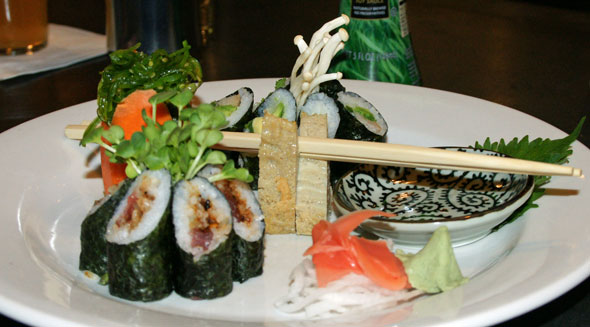 We ordered spicy a tuna roll (front) and a yellowtail roll with avocado and cilantro. Different. The chopsticks were held up with two marinated tofu triangles and a carrot was hollowed-out to make a serving bowl for the seaweed salad. Delicious and pretty dinner.

And then I asked our waitress about Nell's-N-Out - a locals-favorite drive-in we had heard about from several people. She insisted we try the deep-fried cheese curds from Nell's-N-Out. 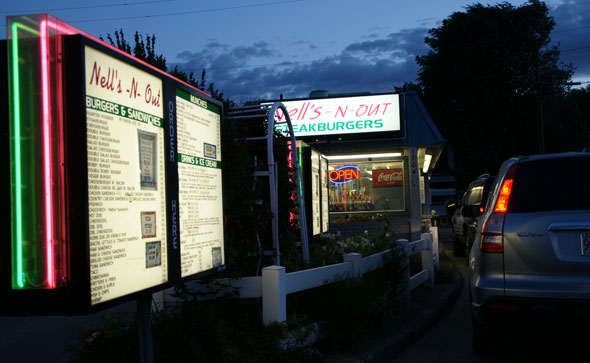 Every person we have spoken with in the area has referred to this restaurant as "Nell's In-and-Out, though it clearly says Nell's-N-Out on the signs. Nell's-N-Out is just a little travel-trailer-sized restaurant, with no indoor seating. The drive-through, located at 1704 Adams Avenue, is famous for their burgers and cream beverages. We just ordered deep-fried cheese curds. All that healthy sushi was quickly forgotten. But seriously, what could be better than a battered and deep-fried cheese curd?

Until my next update, I remain, your I'm running 692 miles tomorrow correspondent.

Situated on Highway 203 between Union & La Grande, Oregon, this nice park is a good location to explore the area. 90 foot full-service gravel pull-throughs with 30 & 50 amps, heated pool & spa (in season), store, laundry, bathhouse, free wifi, pavilion, tent sites. Set in a meadow below a hill, this park is nothing fancy, but has good facilities and is quiet (though there is an occasional train about a half-mile away). Cell service. We paid $27 per night with Good Sam discount.