Merced, California: The air quality slightly improved, but the news from Paradise continues to be horrifying, and we assume the body count will only climb. How can a community rebuild after such tragedy?

Dave and I were delayed leaving Sacramento this morning. For some reason, our slide rooms would not retract. (It's always something.) Of course, in the ten years we have owned this RV, this has happened before. We could not remember what we did to remedy the situation previously. We tried the usual: restart the bus. No. Reset the hydraulic system. Nothing. Let's look at the fuse? DT pulled the fuse. It looked intact, but decided to replace it anyway. Unfortunately, in our box of fuses, we did not have that particular fuse. (Sucks to be us.) Dave replaced the original fuse and guess what? BINGO. Worked like a charm.

No matter, we are going to find a few spares at our first opportunity.

As I was putting the Jeep through the 12-steps required to prepare it for towing, the engine/transmission made a growl as I finished the final step: putting the car from neutral to PARK. Dang. So, I tried it again and the same sound repeated. Third time, I asked My Driver to turn-off the RV engine (a bit loud), so he could listen to the groan. On the third try, the transmission again made the grinding groan. What was this?

Only one thing to do - GTS (Google That S***) Seems this noise is a thing, and that I may be taking too long to shift from Neutral to PARK? No damage will occur, but the next time, the shift needs to happen quicker?

We headed south on Highway 99, which is like driving on a washboard. So awful and bumpy. Narrow lanes and a convoy after convoy of truckers driving ten feet behind each other.

When we arrived to our reserved campsite at The Lakes, we were worn out from shaking and jostling and smoky skies. Wouldn't you know it, when we opened the RV door, the entry steps did not extend? I can't even imagine how much stuff was jostled-around while we were driving on bumpy Highway 99. The steps did open after the engine was restarted, so all systems are working on our bus as I type this tonight.

But... as Scarlett would say: Tomorrow is another day.

After setting-up camp, we drove into Merced to spend the afternoon with Dave's mom. Lisa drove up from Los Angeles with Leo. The entire family was supposed to drive to Merced together, but Little Lucy is still not well and certainly no one in a senior living center would appreciate a sick child - no matter how cute her blonde curls may be. The kids were both at the doctor this morning. Lucy declared still ill; Leo receiving a flu shot. Leo is too skinny to get a shot in his arm, so they had to give it to him in his thigh. Rebellion is strong with this one.

We all spent the afternoon with Dave's mom, Brother Bill, and Ginger. Mom seems well, but still does not like her photo taken, so you will just have to take my word on her well-being. 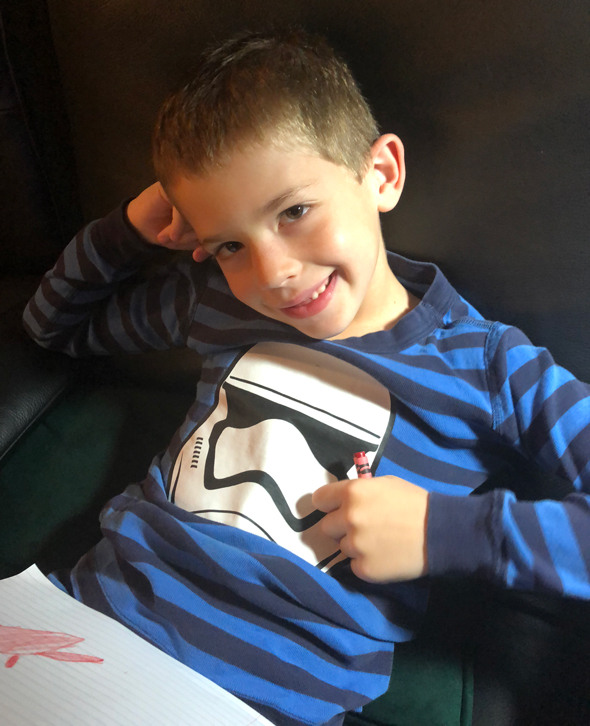 My Favorite Grandson - in his jammies, ready for bed

Lisa and Leo came back to our RV to spend the night. I made mac & cheese (because Leo loves my mac & cheese) and a huge salad with Gina's greens, tomatoes and vegetables. After dinner, Leo polished-off the rest of our Halloween candy, took a shower, and went to bed - after making so many drawings in his new Tokyodachi Oregon Duck notebook. Leo made a chart, drawing the logos of all the teams the Washington Redskins had beaten so far this season, and the 3 teams they had not. Not only impressive that a seven-year-old knew the teams/logos, but that he could recall the wins and losses. 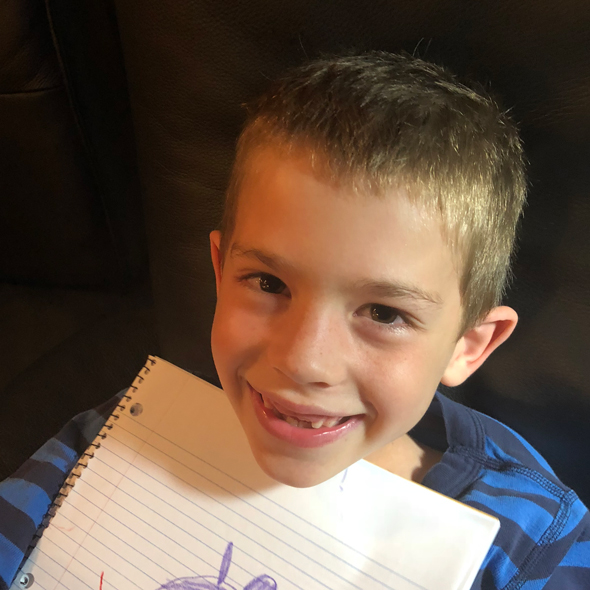 Until my next update, I remain, your reunioned correspondent.

RV Park: The Lakes Golf & RV Resort, in Chowchilla, California. A very nice full service campground, with large pull-through and back-in sites. Pool. Regulation golf course, laundry... however, six months ago when we were here, they kept running out of water from their well and it seems the problem has not been resolved. For this, we were charged $55 per night. Not a good deal, but the best option near Merced. (PS: DT filled our fresh water tank before leaving Sacramento.)

« On the Ranch Day Cruising »