Indio, California: Shaking things up to start the week. Oddly, on the second anniversary of the horrific earthquake and tsunami in Japan, SoCal had a 5.2 earthquake and I witnessed a miniature tsunami in the canal in front of our motorhome.

Dave was out on a 30-mile bike ride (he did not feel the quake) and I was just about to head out the door for my run when it seemed as if a NFL linebacker had jumped on the entry step of our RV... along with several of his teammates. I mean, the bus took a definite sudden pitch to the passenger side. I immediately went towards the door and that is when I noticed the bus swaying and saw the entire lake shrink a foot from the shore in front of our site! Earthquake! Our motorhome rests on a series of airbags, so the shaking is absorbed, and at the same time, accentuated. The shaking seemed to last forever, but it was probably only 10 seconds.

The mid-westerners ran out of their RV's and gathered in the street. The Californians were only vaguely temporarily distracted. After all those years in SE Asia, I am accustom to earthquakes. Still doesn't mean I like them, and the quake today - occurring only 18 miles southwest of Indio - was a doozy.

I have completely lost-track of the number of aftershocks. 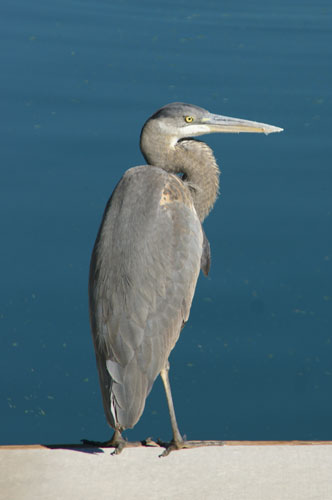 I wonder if the earthquake spooked this heron? He landed on our boat dock when the quake was over and didn't fly away when I approached him with my camera. Usually, the herons fly-off if we even step outside our motorhome. 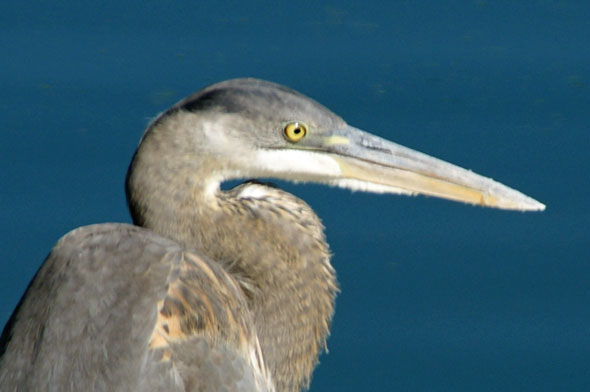 Other than rattling and rolling, I am working on a Mexican-style meatball recipe. So far, I am pleased with the results, but want to create a beef/red sauce version, as well as a poultry/green sauce version. 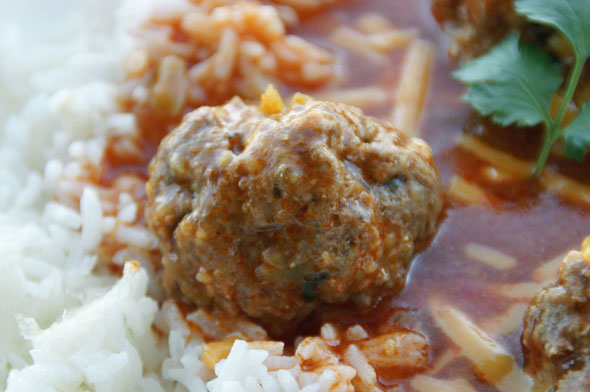 The UO Trustee meetings are in the desert this week. The University is kind - since they ask their trustees to fly-in from around the world (at their own expense) for meetings several times a year - they ask everyone to meet in sunny Palm Springs instead of the usual soggy Eugene for the March meeting. Conveniently, Dave is already here!

Tonight we attended a welcome cocktail party for the trustees and their spouses. The party was held on a very sunny terrace at the Miramonte Resort in Indian Wells. 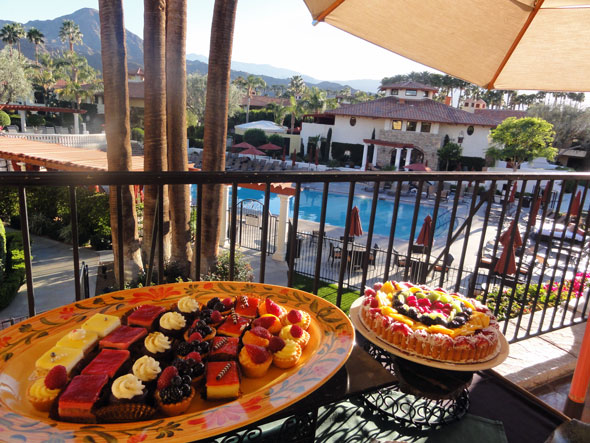 Such a beautiful property - I expected Clark Gable to walk onto the patio at any moment with a golf club over his shoulder! (In my fantasy Mr. Gable is wearing all white.)

Dave's cohort, Vin Lananna, is in town to discuss the impact on the University hosting the 2014 World Junior Track & Field Championships with the Trustees. Vin spent the afternoon meeting with DT at our little campsite. I am pretty sure this is the first RV park Coach Lananna has ever seen.

It's all down-hill from here, Vin.

LET'S MOVE IN MARCH! I have challenged y'all to get out there, lace up your sneakers and walk or jog (or the exercise of your choice) at least 30 minutes - five or six days a week in March. I'm doing this for charity and my prominent backside.

Training Tip from an Old Fat Slogger:  Posture! Stand up straight, look ahead and suck-in that gut. Your feet will follow.

I ran 3 miles inside the resort. I started late and it was already really warm, so a very tough workout for this old granny today. How's the "Let's Move in March" thing going for you? Comment below.

Until my next update, I remain, your "shaken, not stirred" correspondent.