I don't know what happened. Apparently Mother Nature has a calendar and read that it is officially Autumn. She must have an "Autumn" switch on her World Weather Control Panel and last night, she flipped her Portland, Oregon sector to "on". We woke to cold rain and wind.

I am wearing a turtleneck sweater.

Indoor Life continues... DT had been away for four days, enjoying a golfing outing in Central Oregon with his Dinosaur group. Eight men golfing all day and playing dice and card games all night. Cocktails may have been involved. Possibly some gambling. He was exhausted upon his return, but rallied enough to head over to Mary & Steve's to watch the Ducks beat the Arizona Wildcats 56-31 in Tucson. LaMichael James, who is also on the Oregon track team, had an incredible game and broke the school single-game rushing record by carrying the ball 288 yards, including two touchdown runs. Another track team member, Kenjon Barner, carried the ball for two touchdowns as well. The Arizona student section was basically empty after half time and our cheerleaders had to wear hard hats (photo) due to an unfortunate incident the last time they visited Tucson. Football is a violent sport. Thank goodness it is nearly cross country season!

There is a construction trailer in our driveway. Tomorrow a dumpster will be delivered and demolition will begin on Lisa's girlhood bathroom. We are turning her bedroom and ensuite bath into a family-friendly retreat. DT and I prepared the room for the remodel today. 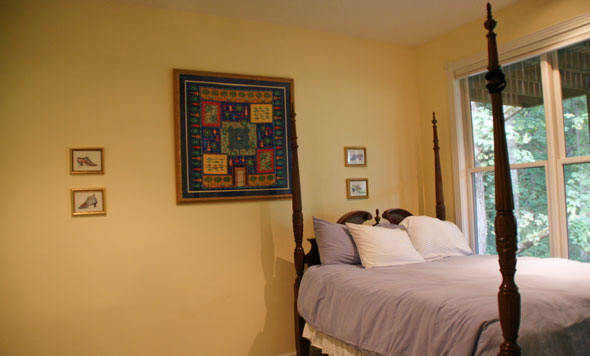 Lisa's bedroom furniture has either been removed or pushed up against the wall. Our contractor will need a lot of room to move around. 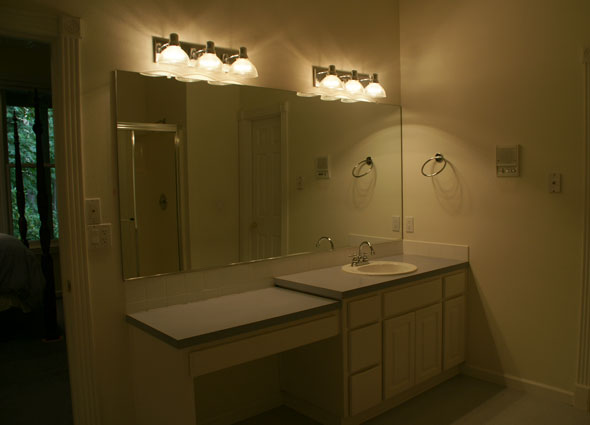 BEFORE: This bathroom was great for a teenage girl, but it has become so dated and worn after 17 years. Say goodbye to the vanity. The cabinets, sink, faucet, mirror and lights will be donated to Habitat for Humanity! Hopefully, for another teenager to enjoy. 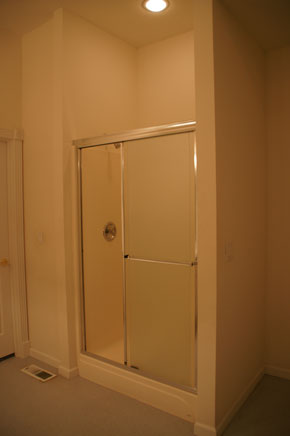 Say goodbye to the tub. It will also be donated to Habitat for Humanity. (Sadly, the fiberglass shower will not fit through the door, so it will be cut into pieces and donated to our local landfill.) Dang, we need some color in this bathroom! The bathroom has rarely been used since 1999 and it shows.

Our pet spiders are looking for new homes. 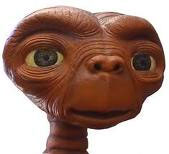 Speaking of Lisa... last night Lisa, Lenny & Leo went to a movie in Los Angeles - in a cemetery! Seriously. Every summer, Hollywood Forever Cemetery shows movies in their "Cinespia" series. Guests bring blankets to spread out over the graves, picnic, sip wine, then lay back to watch films projected on a temporary screen. This week, the cemetery was showing (the 29-year-old movie) ET, and Drew Barrymore was there to introduce the film. How fun! Leo slept through the movie.

Due to the foggy weather, my run this morning was indoor on the treadmill. The moment it begins to rain, my old hip gives me fits, so My Coach had me do a fun work-out that was pretty easy on the old joints - walk for one minute; run for four minutes. This run is so do-able, I was easily able to cover four miles! No pain. My Coach is very smart. 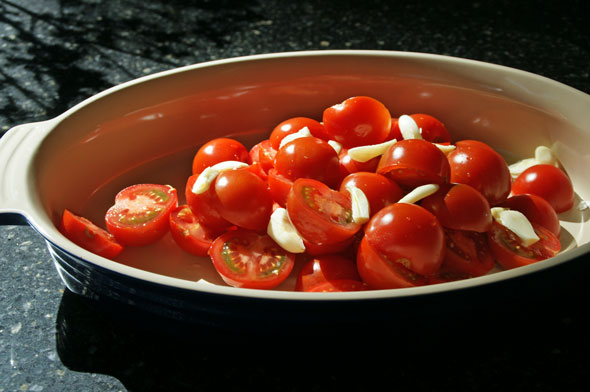 His coaching efforts were rewarded tonight as I prepared a delicious Roast Tomato Sauce for his spaghetti. My recipe is so simple and takes just a few moments of your time, as it bubbles-away in the oven while you move furniture or jog or nap. Today I used two pounds of small tomatoes and several cloves of garlic. 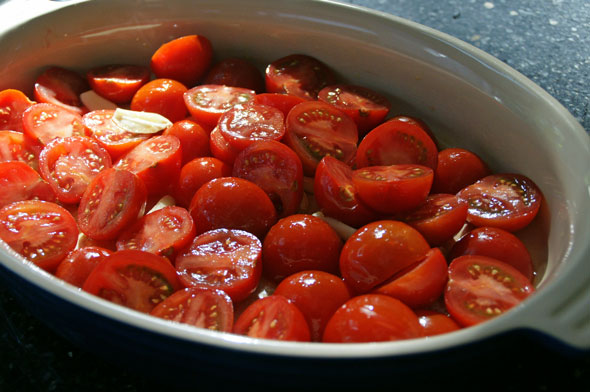 The tomatoes and garlic are tossed with a little olive oil and roasted for 30 minutes in the oven. 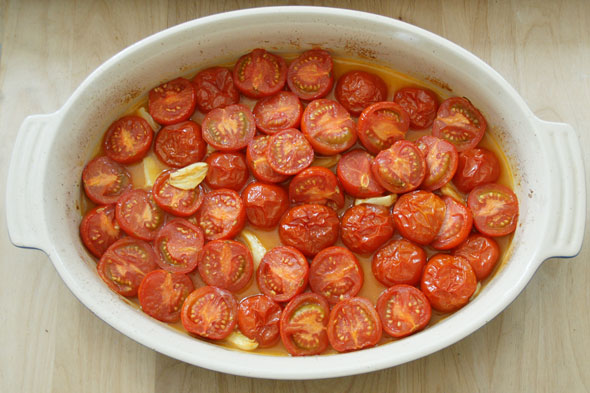 After 30 minutes, the tomatoes are oozing with sweet flavor and the garlic has melted. 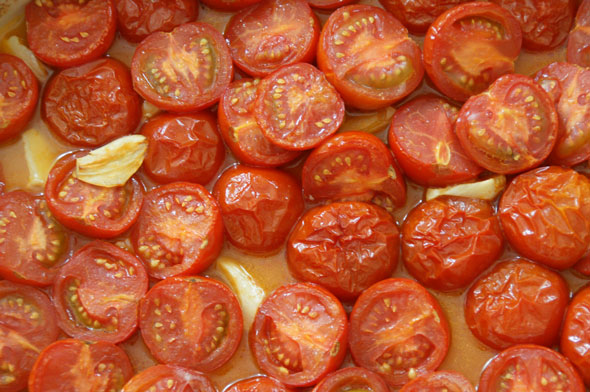 Smashed down with a potato masher, the tomatoes are returned to the oven for an additional 30 minutes. 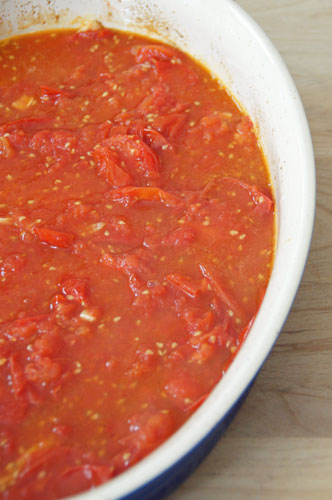 After another 30 minutes, and another smash the potato masher, the sauce is thick and savory. Toss in a few handfuls of fresh herbs, salt, pepper and whatever, let it roast for another 15-20 minutes and you will have a perfect pasta sauce. 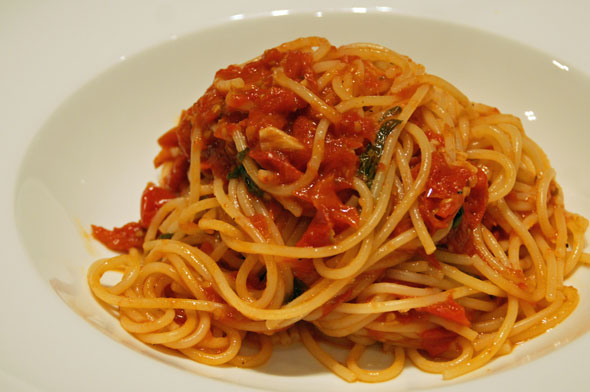 Which was simply luscious and rich tossed with spaghetti. The meal is low-fat and vegan. 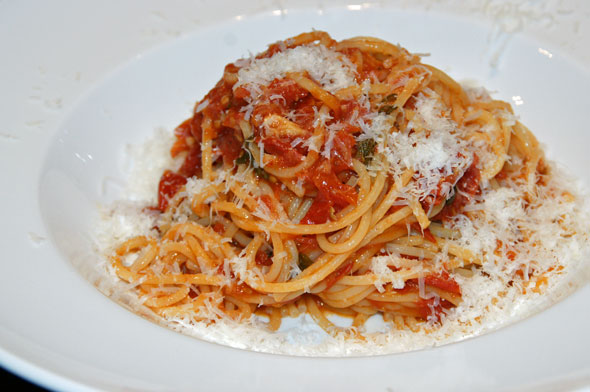 Until I sprinkled a little pecorino over the top.

Until my next update, I remain, your calm-before-the-storm correspondent.
« Catching Up Bath Remodel: Day 1 »