Las Vegas, Nevada: With an entire day ahead of us, with hours of time to fill before the Big Game, there was nothing to do but our usual Las Vegas itinerary: walk and eat and walk some more. Since we had never tried the burgers at Shake Shack (not living near a branch), and hearing nothing but raves, we walked over to the restaurant for lunch. 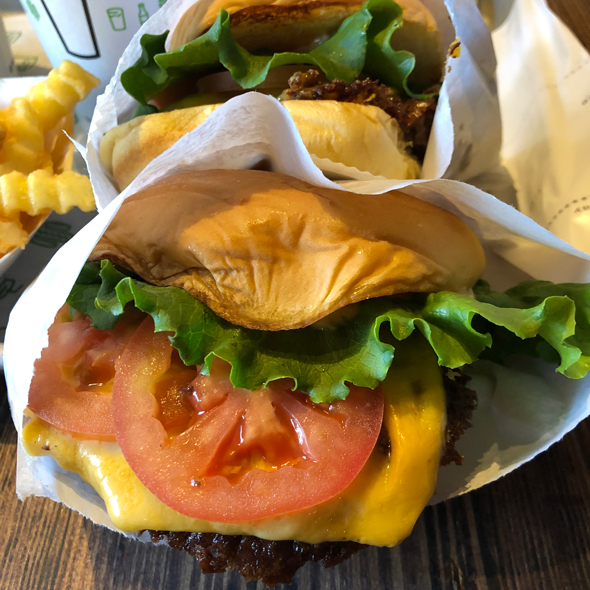 They serve-up a very tasty burger. Crispy edges, soft bread, fresh veggies. I tried a shake, but it was too thick to drink (though very flavorful) and the fries were also good. Another thing checked-off my foodie list. (I still prefer In-N-Out.)

Our route (somehow?) took us past the M&M store. They sell every color of M&M candies and customers can create their own mixtures. Sold by the pound, I think gold may be actually cheaper. We bought a teeny amount of “unicorn” mix colored candies (pastels) for Lucy, then made a mix of maroon and gold for Leo (DC football team colors)… and a big bag of green and yellow for our candy jar. GO DUCKS!

We met Mary and Steve (and Cory, for a bit) for dinner at Javier’s (Oaxacan Mexican food) restaurant in the Aria. As usual, the food was good. Everyone was so excited for the game!

Crowds were flowing into T-Mobile arena and there was a lot more security than usual for the final game of the Pac-12 tournament. 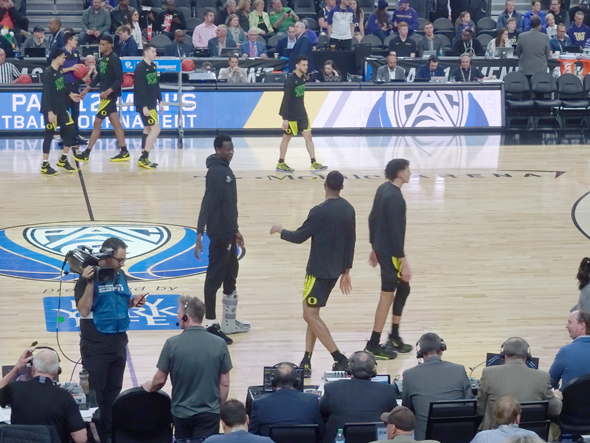 The Ducks came out to warm-up, with large cheers. We realized the Ducks had twice as many fans as the Dawgs. Our injured center, Bol Bol, was on the court, encouraging his teammates. Bol (super tall guy in a boot cast, center photo above) was one of the best recruits last year and we were so happy he chose Oregon… even though it was widely speculated Bol, son of NBA star Manute Bol, would be “one and done” – meaning he would go into the NBA draft after completing only one year of college. Sadly, Bol (7’2″) injured his left foot in December, requiring surgery. He is still in a boot, still not playing, but has stayed in school and stayed with the team, attending every practice, and traveling to every game.

The Ducks started the game strong, and never relented. Oregon led by two points at the half.

The half-time show today was not the best. Just some people in space-age costumes that lit-up every time they hit a drum. 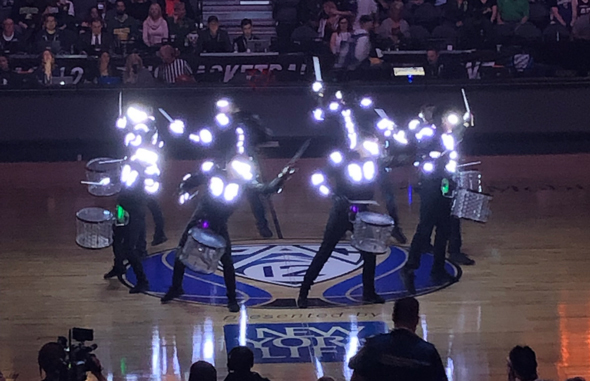 Noisy. (Bet Leo would have loved this though.)

The Oregon Ducks were dominant in the second half.

The Ducks scored at will, pushing the Washington Huskies so far behind, it was impossible to catch-up. There may have been a bit of show-boating… but it was a very exciting second half… if you were a Duck fan. Sixth-seed Oregon beat #1-seed Washington by 20 points, 68-48, making Washington the lowest-scoring team in the tournament.

Washington will still be selected to play in the NCAA tournament. With the tournament win, the Ducks have an automatic entry. 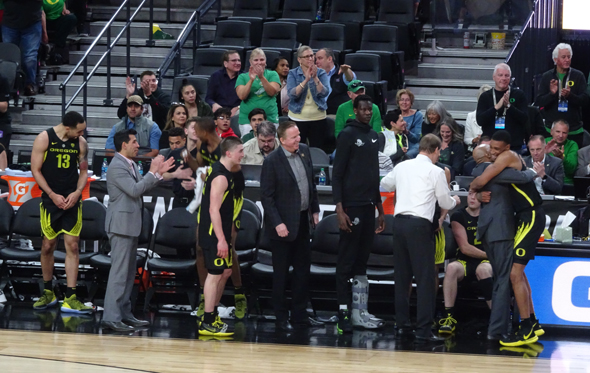 Starters come off the floor to let the bench play at the end of the game. 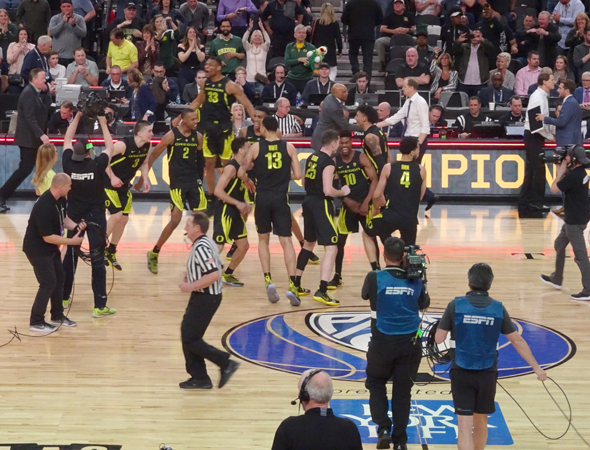 Happy players at the end of the game..
and Bill Walton’s bald head at the bottom center of this photo. 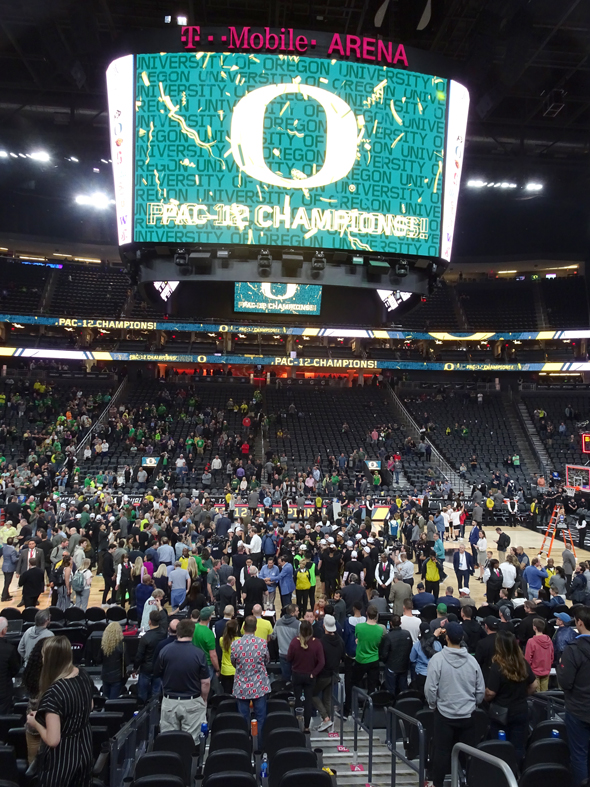 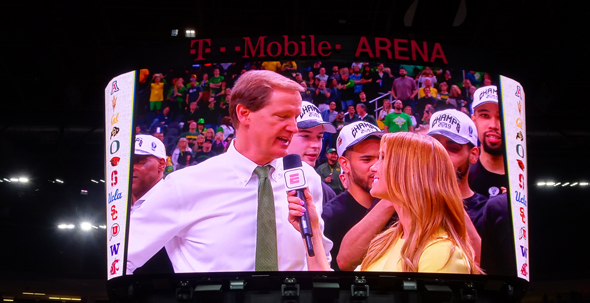 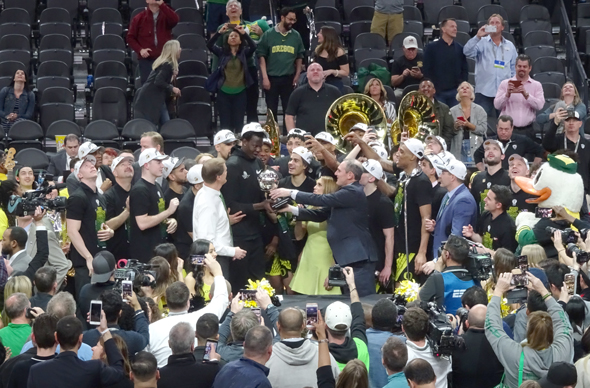 The tournament trophy was awarded, and Coach Altman asked that it be received by Bol Bol. Wow. A wonderful gesture, especially as Bol Bol went to high school in Las Vegas.

We were as tired as the players, who have played won four games in four days. An early night – our friends fly back to Oregon early tomorrow morning.

The NCAA tournament begins in a few days.

Until my next update, I remain, your very happy correspondent.