Palo Alto, California: Forget everything I said yesterday about our deluxe campsite at Stanford Stadium. Before dawn this morning we heard a knock on our door - it was the Stanford Parking Police. We were not welcome where we had set-up camp. We had to move. (Why isn't there someone to tell you where to park when you arrive?) We put everything away, and brought down the satellite dishes and drove 100 yards down the parking area... and started over. At this site we were not so lucky with satellite reception and could never get our television to lock-on. We were not happy. 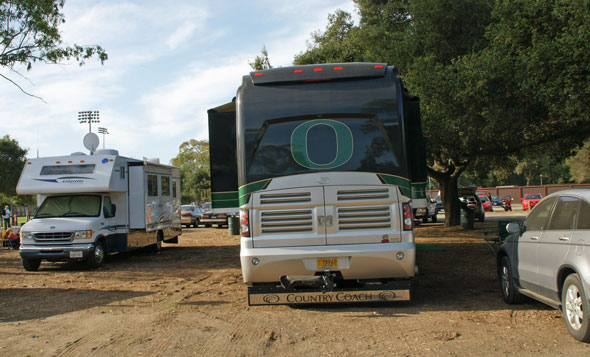 The C-Class RV to the left was camped next to us last night (the martini reference from yesterday). When we were asked to move this morning - they moved with us. This group is related to Oregon lineman (#90) Blake Ferras who was recruited out of San Francisco City College with Duck QB Jeremiah Masoli.

Speaking of Masoli... he is from the Bay Area and 400 friends and family gathered in the soccer field adjacent to Stanford Stadium today for a huge BBQ/family reunion before the game... in matching #8 Masoli t-shirts no less! 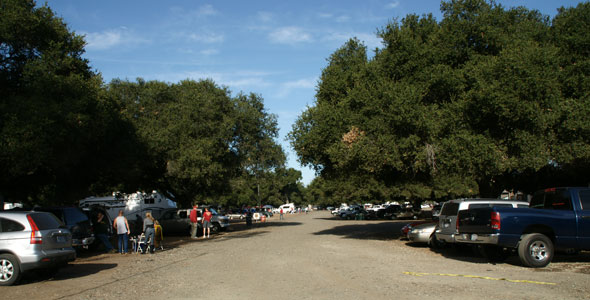 The parking/camping area really began to fill-up... and it was quite evident there were as many Duck fans in attendance as Stanford fans. Weird. 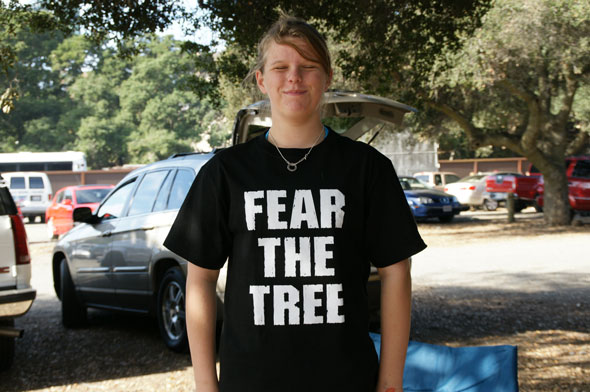 Known fact: Stanford has the worst mascot EVER. 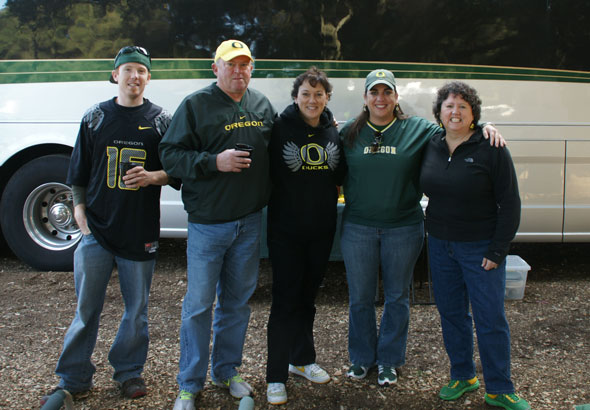 Ryan, Steve, Mary, Julie and me before the game (not pictured: DT and Kip) 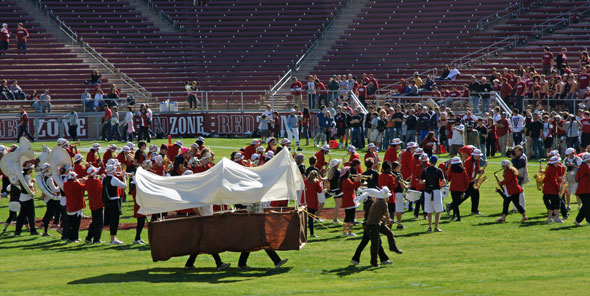 Before the game, the Stanford Marching Band made fun of Oregon (the State, not the school). References were made about forests, covered wagons and Spotted Owls. It was fairly pathetic. If they wanted to slam us, why not just compare the average SAT score of the students? Geesh. Like Duh. 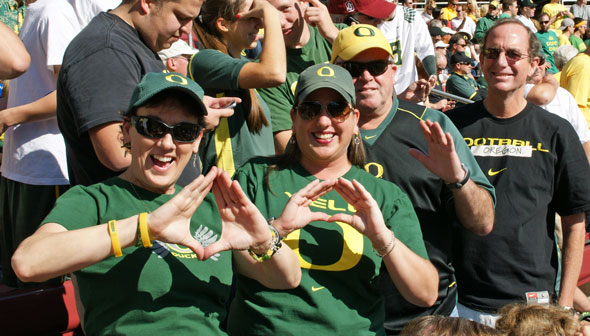 It was HOT inside the stadium and we had the sun beating down on us all afternoon - quite a change from the rain and clouds of yesterday. 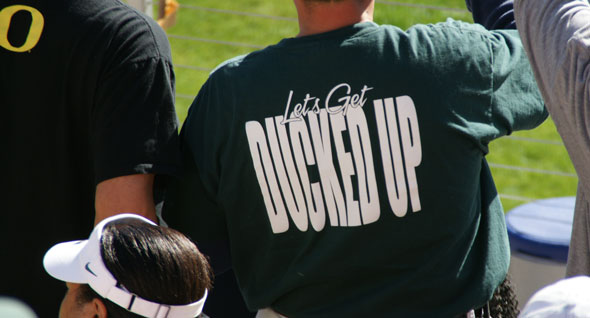 Let's get Ducked Up 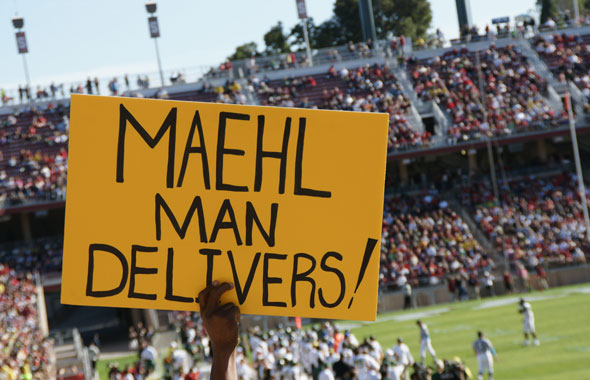 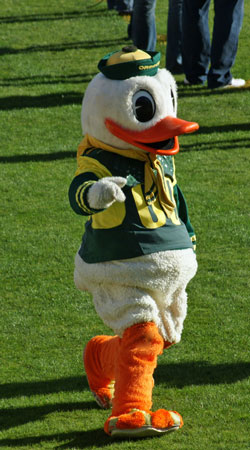 Of course The Duck was in Palo Alto 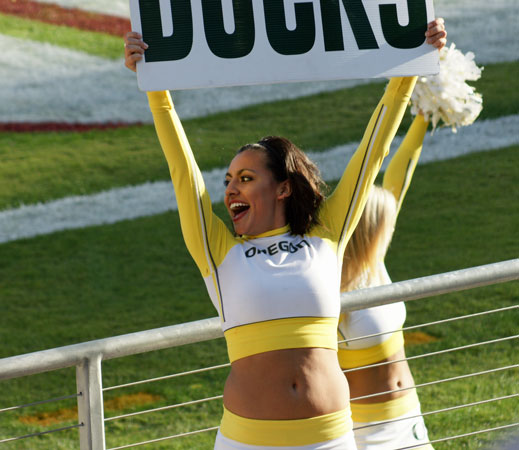 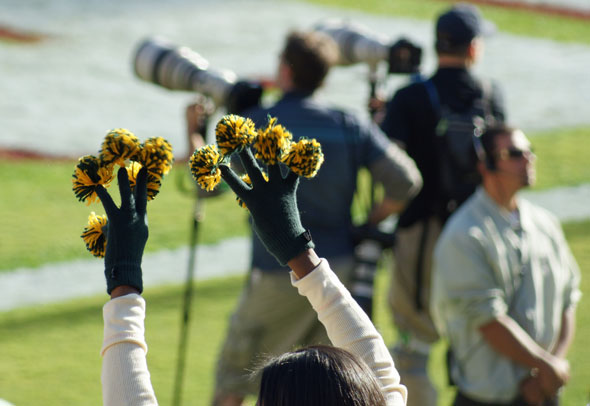 And apparently some sort of new pompom glove thing??? 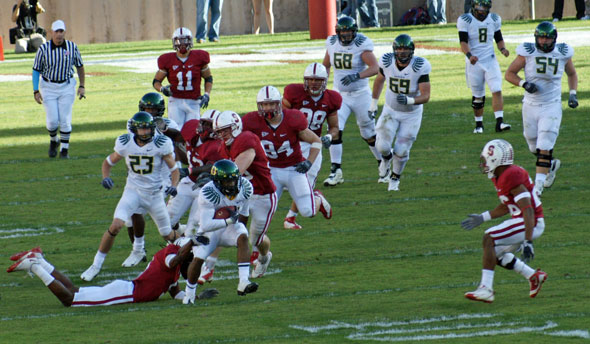 they even snag him once or twice... 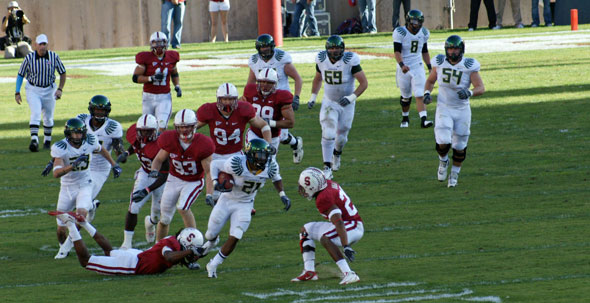 but they can't stop LaMichael James.

I don't think so. 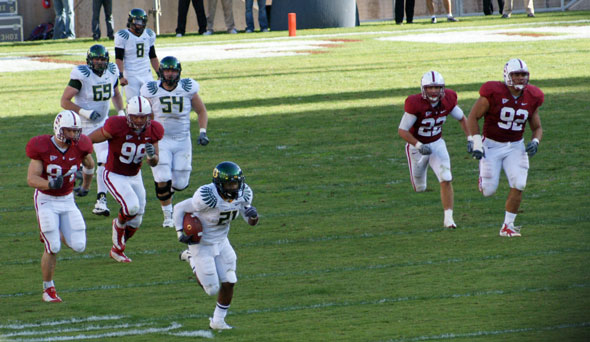 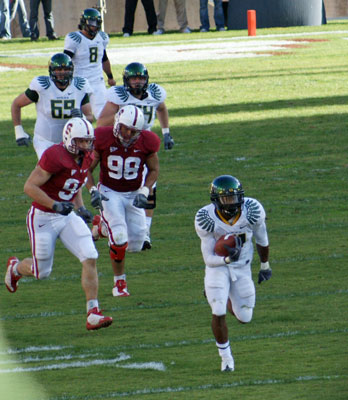 I can type anything I want... but the Ducks lost. Fell hard to the color red at Stanford Stadium. 52-41. Ugly loss too. Not to mention a very long drive home. 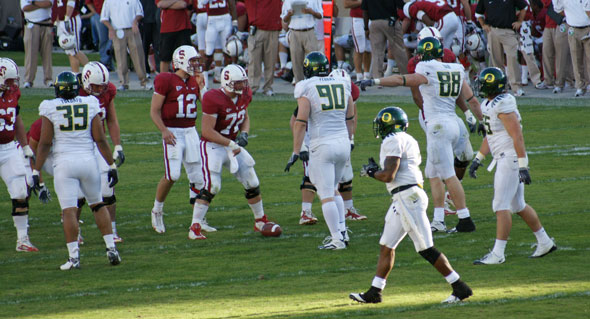 Here is a photo of #90, Blake Ferras. Don't mess with Blake. 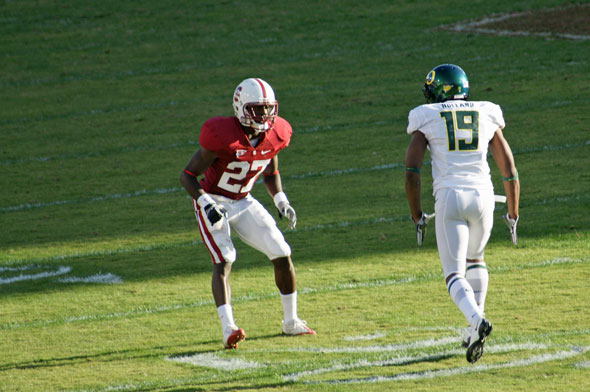 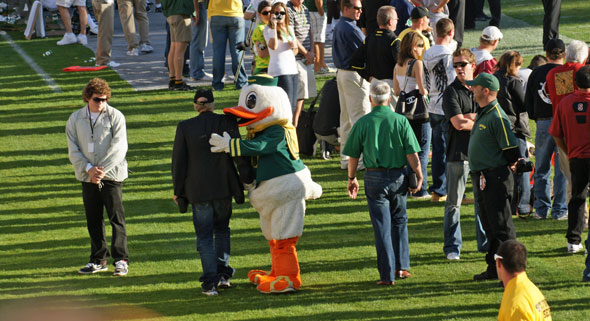 Phil and The Duck

When NIKE co-founder Phil Knight walked into the Oregon bench area at the end of the game, the Oregon crowd gave him a standing ovation. Mr. Knight may be an Oregon alum and the biggest supporter... but he earned his MBA at Stanford. No one ever doubts his loyalty however. I'm pretty sure Phil bleeds yellow and green. 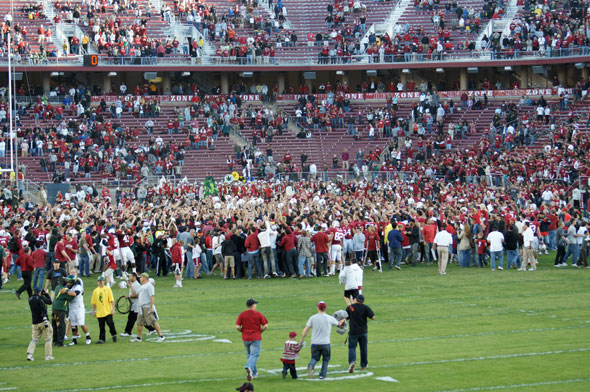 Beating Oregon must have been a very special victory, because the students stormed the field after the game. This was the first game I have ever attended where there were more visiting fans than home fans. Very strange - and just not right.

After the terrible loss, we went back to our RV for a few post-game beverages (drowning our sorrows, so to speak). We were able to see a few of the Oregon team members before they boarded the charter buses to the airport. We saw LaMichael James munching on Popeye's chicken with his Mom. Jeremiah Masoli was having his photo taken with groups of cousins. It was fun... but definitely would have been more fun if we were taking a victory back to Eugene.

You win some. You lose some.

Until my next update, I remain, your GO DUCKS correspondent.
« Palo Alto Back in the Valley »