Las Vegas, Nevada:  Except for the terrible basketball game, we had a very nice day. The weather was beautiful, so we decided our activity of the day would be to walk across the street and buy M&M's for our grandchildren. Walking "across the street" in Las Vegas means at least a mile of traipsing up and down stairs, sky bridges, escalators and around all-sorts of causeways in order to parade visitors past as many shops, street performers, street hustlers, restaurants and casinos as possible. We would need fuel. 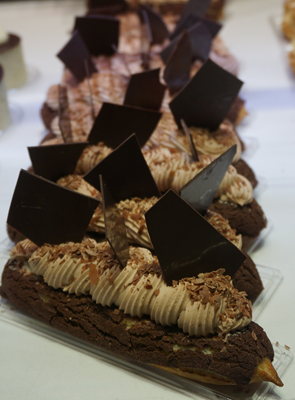 Oooooh! Doesn't this all look so good? We only looked and took photos. We had normal breakfast foods - and coffee. Then we walked through the lobby of the Aria Hotel and took pictures of each other. Tourists! 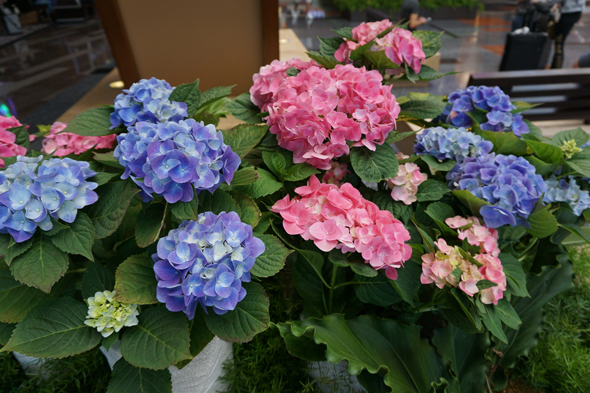 To reach the M&M store, we walked through the shops in the "mall" attached to the Aria Hotel. These shops are so incredibly upscale, Tiffany is the most mainstream store. Gucci. Hermes. There is rarely a shopper inside a shop. How do they stay in business? 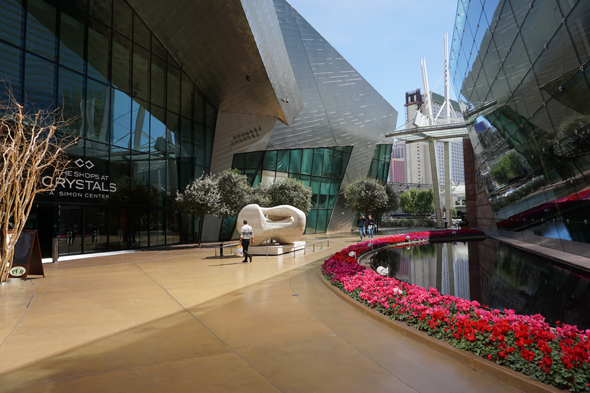 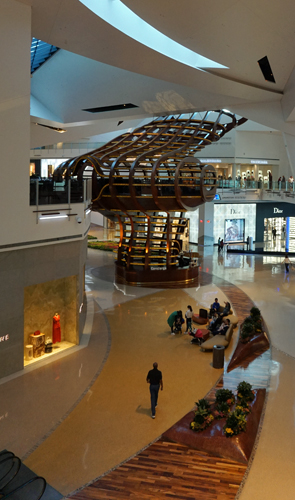 Dine suspended in Crystals Mall (left), and the white spires are frozen and standing in a pool of water. I can't decide if it is a water feature or an art installation, but water oozes from the top and freezes as it trickles down the frozen shaft. Really? I think you need to be over 18 to see this sculpture.

After exiting the shopping area, we could see the M&M store off in the distance - next to the MGM Grand Hotel: 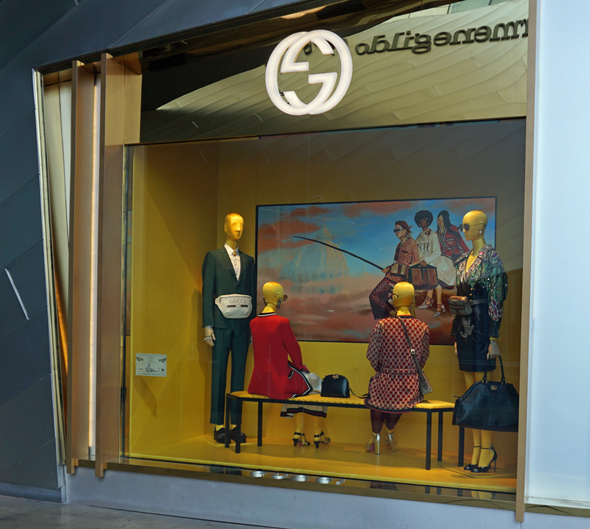 About an hour later, we finally reached the shop and purchased about 3/4 cup of candy for each kid. We chose green and yellow for Leo; pink and purples for Lucy. Lisa will be angry we bought them candy. 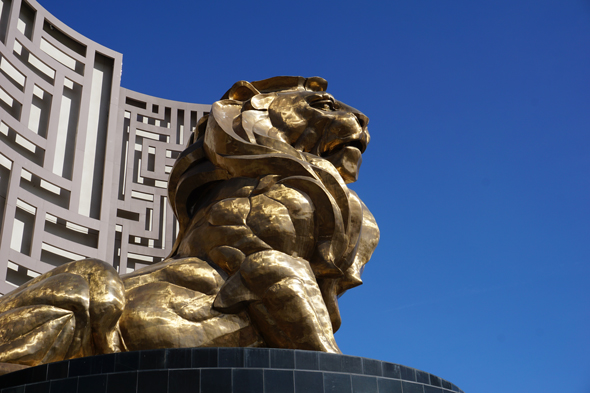 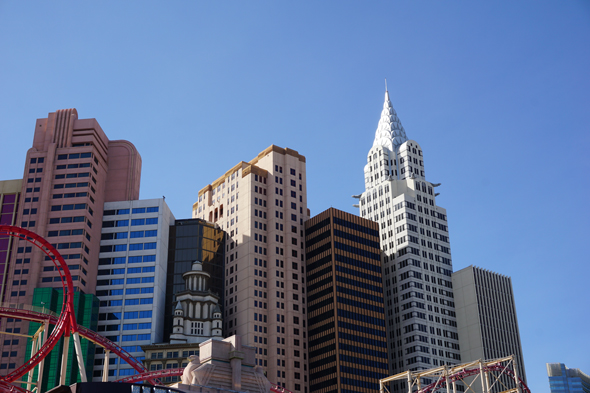 We walked through New York New York and found ourselves outside the T-Mobile Arena again. 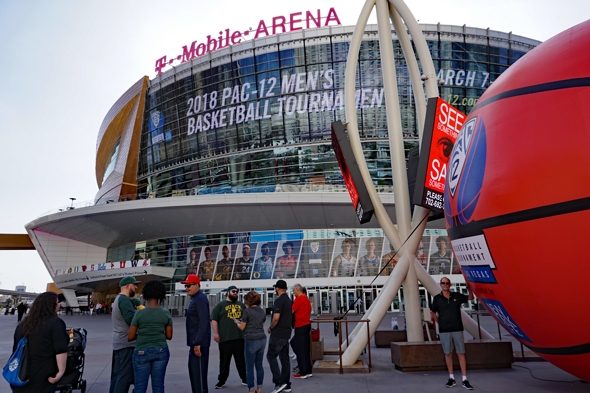 DT outside the arena 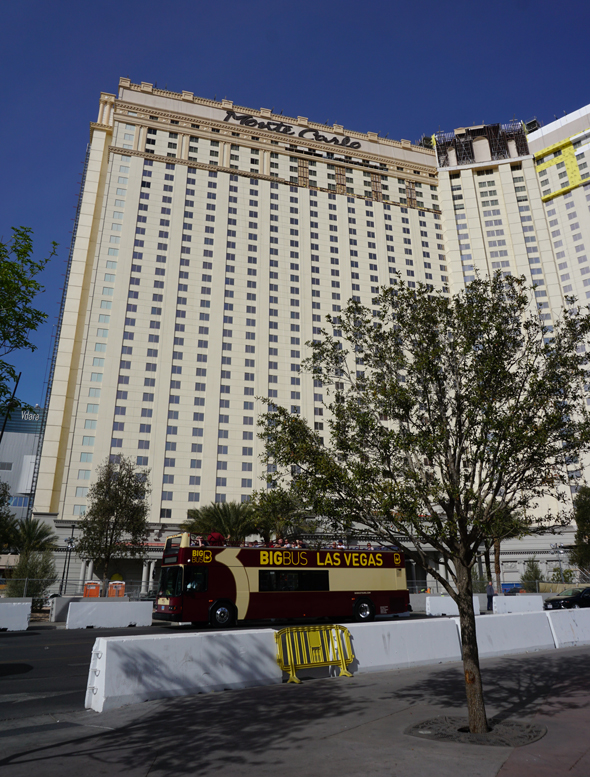 The Monte Carlo Hotel is being refurbished and re-branded.
It will become The MGM Park Hotel in six months.

After another great meal with Steve and Mary, we headed back to the arena to watch the UCLA v Arizona game. 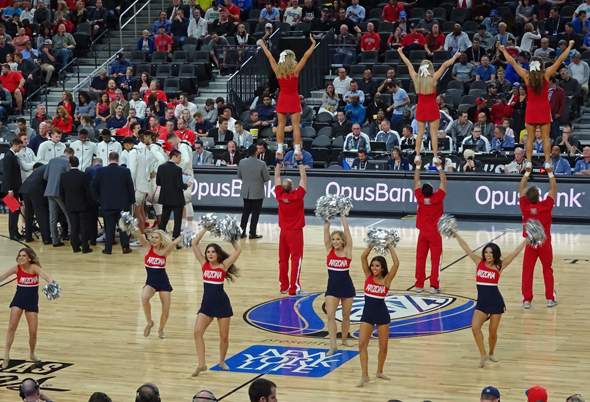 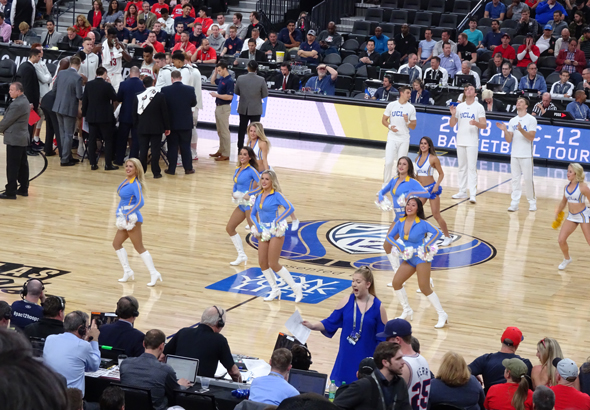 I still love the UCLA cheerleaders and their hot pants and go-go boots! 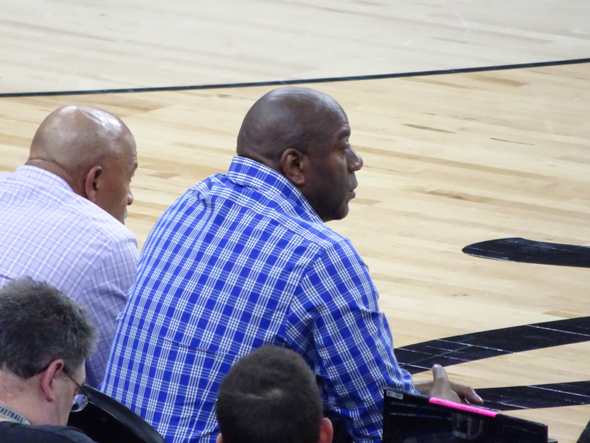 Magic Johnson sat courtside - watching the Bruins. This game was very good. Great skill on both teams, but Arizona won. No one was surprised. 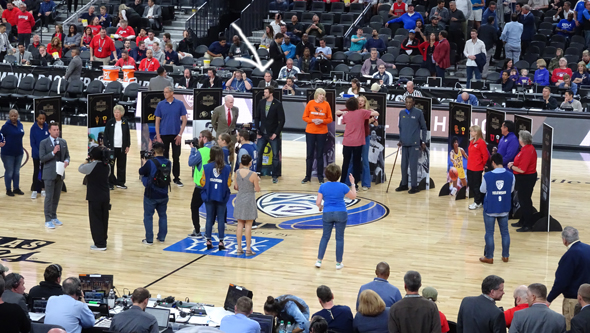 Between the two evening games, each Pac-12 school inducted an athlete into the Pac-12 Hall of Fame. Andy Wheating was inducted for Oregon. Congratulations! 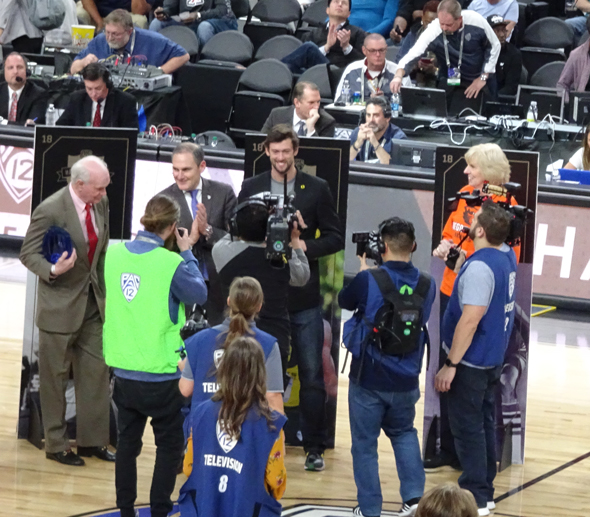 He looks very happy! Love me some runners.

He probably wasn't happy for long. Dang if the Oregon didn't stink it up and lose to USC by twenty poinnts. TWENTY! 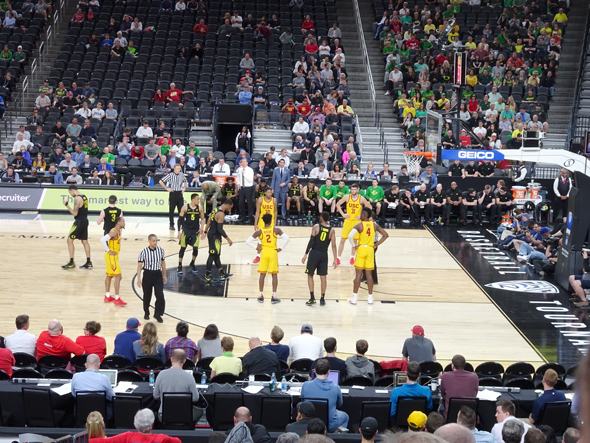 So happy they made it to the semi-finals, but without a tournament victory, the Oregon Ducks will not play in the NCAA tournament. Wasn't it only last year they were in the Final Four? How quickly things can change.

Arizona v USC tonight, but I think we will not attend. Still proud to be a Duck, but let me be sad for a few days.

Until my next update, I remain, your defeated correspondent.
« Ducks Advance Day of Rest »