Track Town USA: Since I am typing this quite late in the evening, events have become a bit fuzzy... so I will just post a bunch of photos and tell you about our day at Autzen Stadium. I must also mention, my day started before seven o'clock as ESPN GameDay was filming from Autzen Stadium... and I had to prepare mac & cheese for thirty. (I watched the show on television from our RV kitchen.) Hundreds of Duck Fans and students were at the stadium early (before dawn) and ESPN GameDay was highly entertaining.

About noon we headed over to start tailgating with our friends. 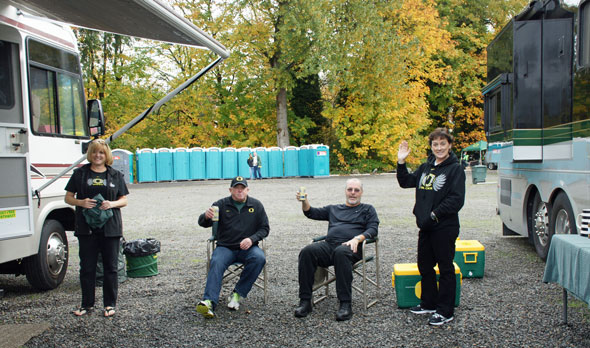 Ready to go - Kathy, Steve, Woody and Mary toast for a great game. Notice we are near about a zillion porta-potties. 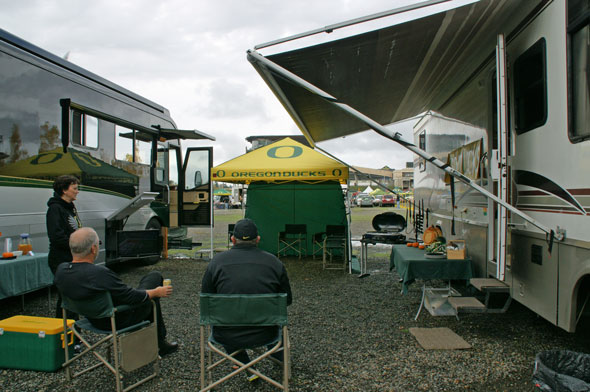 We (three couples) have three RV sites together in the Autzen Stadium parking lot. We bring two RV's and keep the center space free for partying. This is the calm before the storm. 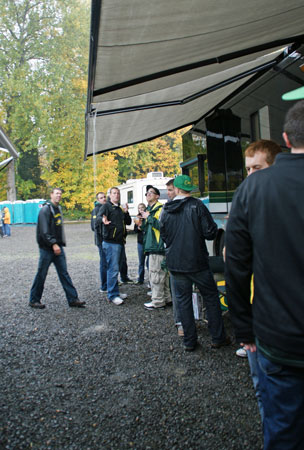 Of course, it rained. Buckets of rain were streaming off our awnings most of the afternoon. 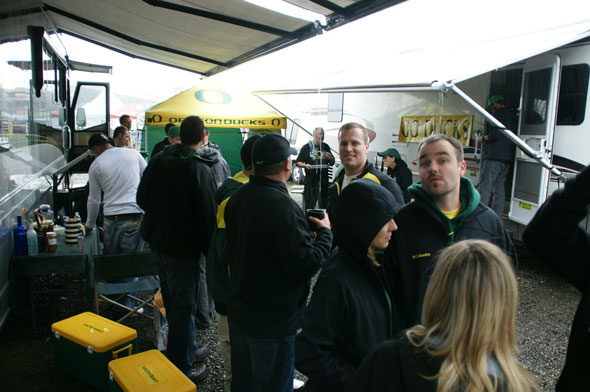 The harder it rained, the more friends we had that remembered we had large awnings, good food and cold beer. 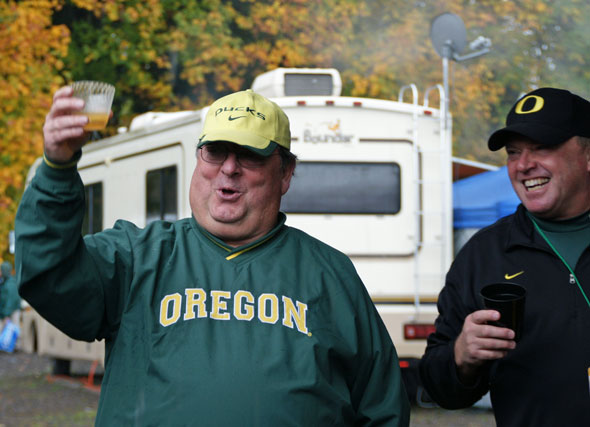 We had a birthday this week too - Happy Birthday, Donnie! 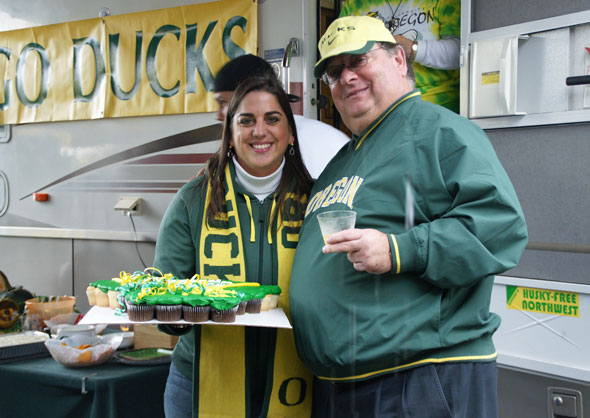 Donnie's daughter, Julie, brought a cake made of cupcakes. Of course, it was decorated in a "GO DUCKS" theme.

Many friends - with or without costumes - visited our party: 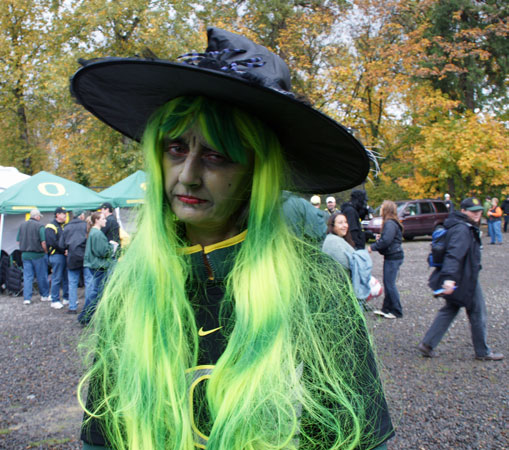 Including this lovely creature. 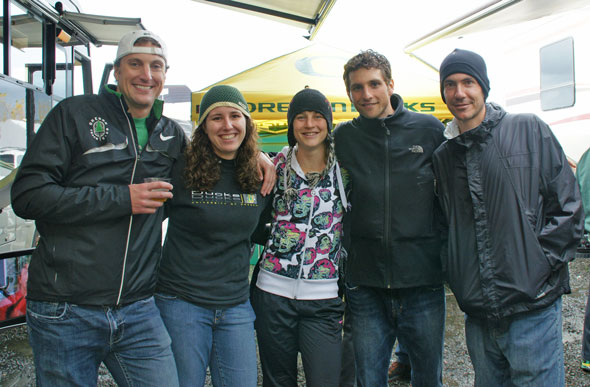 We hosted friends, family and athletes... sometimes in the same photo.

Here is where things became a little crazy.

Don't forget it was Halloween.

One of the kids (I use this term as an endearment... the "kids" in our group are well out of college now) came to our tailgate dressed as Lt. Jim Dangle from the Comedy Central television show, Reno 911. 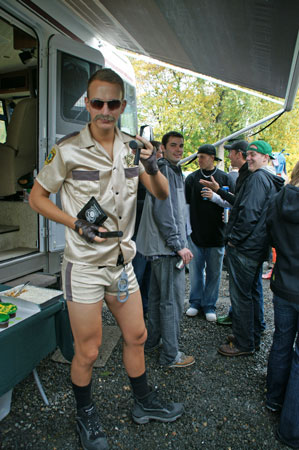 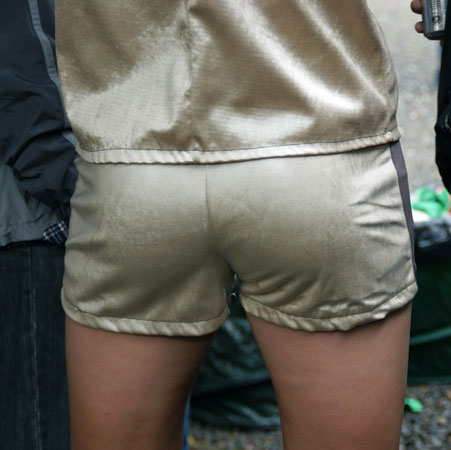 Kyle was writing-up citations and "arresting" people at our tailgate party. This was quite fun... until a film crew from ESPNU Road Trip came by our tailgate. The host, Jenn Brown just had to speak to "the Lieutenant". 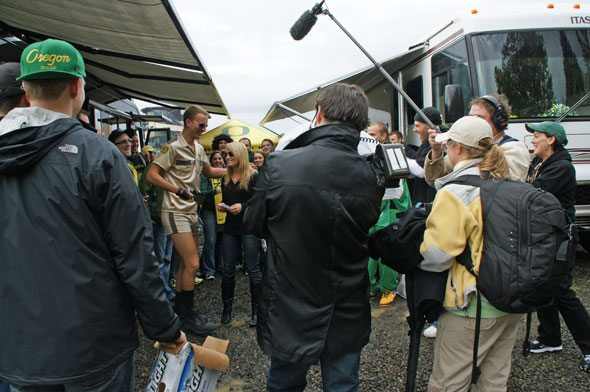 At this point we had over thirty people between the two RV's. Dinner was finished and everyone was enjoying a few drinks before heading into the stadium. Miss Brown had found the perfect party to film a segment for her video. 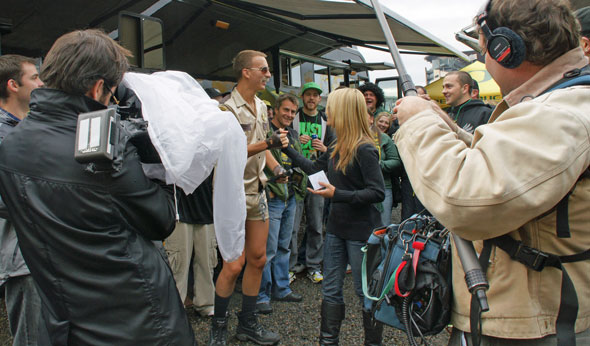 Kyle told her it was time to "lay down the law" on USC! The film crew captured the entire interview. 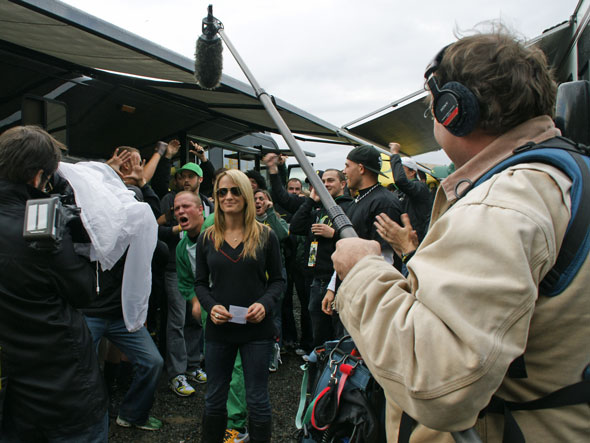 Jenn Brown left our tailgate party with a "citation" from Kyle. And the look on her face is just priceless.

I bet she is thinking: Duck fans are crazy. 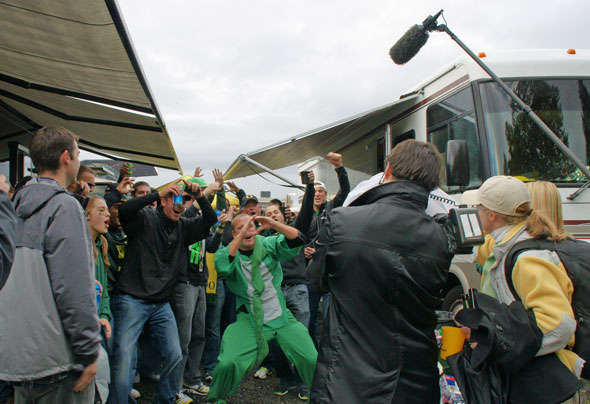 Then the film crew asked us all to cheer. This group didn't need much encouragement. Obviously, I was on the wrong side of the ESPN cameras, so won't be in the video. Dang. Forever forgotten in Autzen Tailgating History. I hope they filmed the Big O on the back of our RV!

(ADDED LATER: Kyle - and our tailgate party - did make the on-line-only video... about two seconds. Seems the entire ESPNU Road Trip is a commercial for chicken wings made by Pizza Hut. Dang.) Go to ESPNU Road Trip, MatchUp 05, Postgame Webisodes, (sit through a Pizza Hut Wingstreet ad) and then fast-forward to 1:57 on the video. 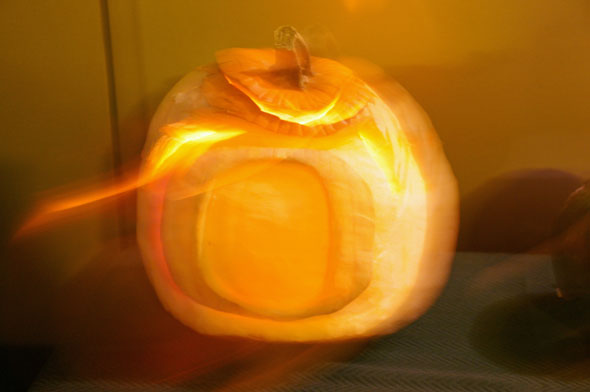 Then everyone went into the game. The #10 Ducks beat the #5 USC Trojans 47-20. It wasn't even close. It rained a bit during the game and everyone was cold when they returned to the RV's after the victory. I found the kids laying on our heated tile floor getting warm! 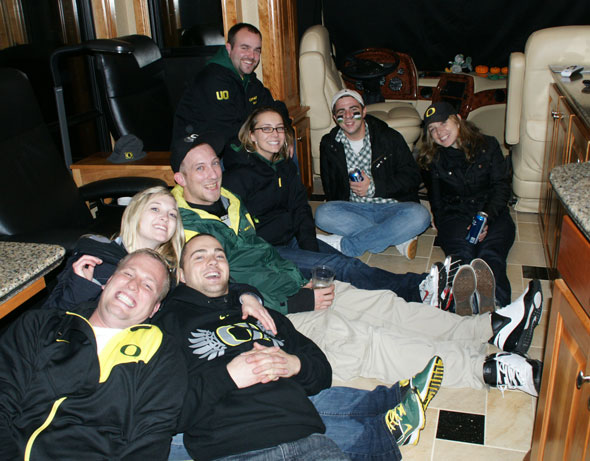 A very cozy end to a very successful tailgate party and a great game.

Until my next update, I remain, your "don't forget to turn your clocks back one hour tonight" correspondent.
« On the Road Again… History »