Corning, California: It began raining around 5:30a, the little tick tick tick on the roof of the RV waking us up, then gently soothing us back to our dreams.

We only planned on a 150 mile drive today to the Rolling Hills RV Park, because DT and Woody wanted to golf at next-door Sevillano Golf Links and Steve wanted to visit theRolling Hills Casino for the usual reason people want to visit a casino. We planned for a quiet day - but we saw a lot of really interesting stuff!

We had wind and rain all day driving south on I-5. North of Dunsmuir, a reader-board said there was an accident ahead and I-5 was closed. I went to the CalTrans website (via my phone) to learn a semi had somehow jumped the center divider - the cab was in the northbound lane and the trailer was in the south. I also learned no one was hurt. 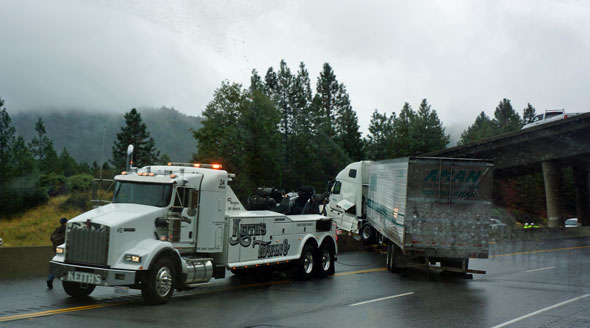 Northbound traffic was stopped completely while the tow truck removed the rig. (Though the tow truck was in the southbound lane... so not exactly sure how this whole thing went down. We did hear the truck was successful lifted off the barricade. (ADDED LATER: Woody and crew drove by this situation only a few minutes later and said there was a tow truck on the north bound lane.) 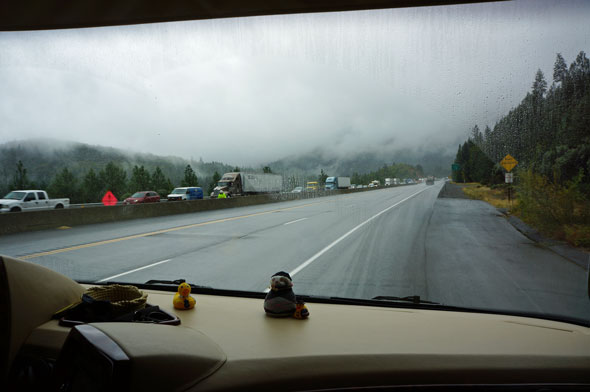 There was a two-mile-long backup down I-5. Thank goodness no one was hurt.

We continued south over Lake Shasta:

We had not been here since October 2012, and were fairly shocked at how low the water level had dropped. 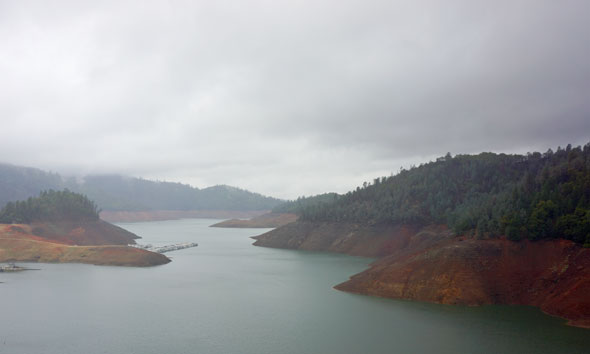 I was SO HAPPY it was raining. Come on, Mother Nature, bring it on! You have a lot of lake to fill.

We stopped at a rest area and chatted with a trucker with a massive load of onions. Without breaking stride, he hopped into his truck, grabbed a plastic bag and started filling it with onions from his load. Mary and I realized he must be giving us some onions. Very generous, and we had to beg him to stop or we would have 20 pounds of white onions in our fridge! Complete stranger being nice... except he probably was giving away onions that did not belong to him, wasn't he? Still, thank you.

By one o'clock we were at the RV park and the boys were heading out to the links. It is $28 to camp here... but if you play golf ($50), they knock $5 off the camp fee. Yes! While DT was away, I ran into town to purchase fruit and left the grocery in the middle of a torrential downpour - monsoon style. 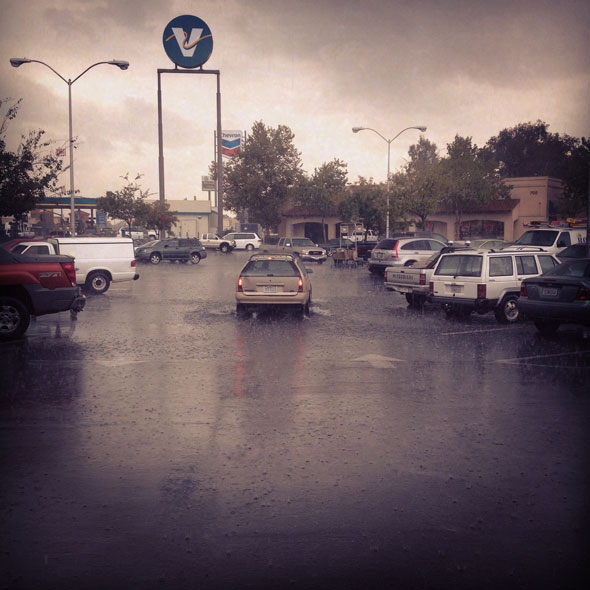 Then I decided to write a letter to California Jerry Brown:

Thank you very much,
Terry Taylor

I will wait to hear from Governor Brown. Pretty sure he checks my blog every morning. First thing. 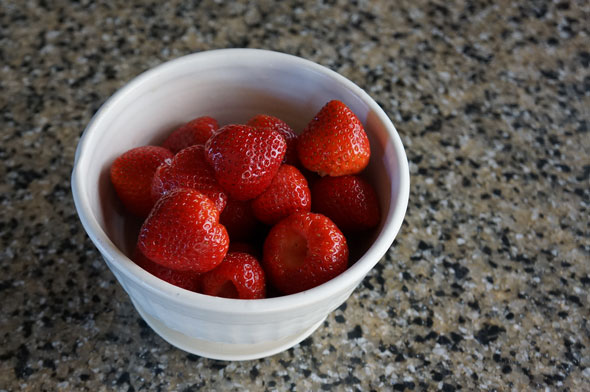 Woody & Kathy hosted dinner tonight. Homemade barley soup and a rustic bread with roasted garlic and Romano cheese baked inside. I baked an apple tart, it kinda fell apart, but the sad appearance did not alter the good taste, especially when disguised/covered by a scoop of vanilla ice cream.

Until my next update, I remain, your California correspondent.

RV PARK: Rolling Hills RV Park - behind the Rolling Hills Casino in Corning, CA. Right off I-5. Long gravel pull-through sites will full-service. This is great place to camp if you are self-contained as the bathhouse is not close by and is shared by truckers. Casino, restaurants, hotels, convenience, truck stop. Free wifi. Free shuttle to casino (but it is only a one-minute walk from the campground). $28.