La Quinta, California: Dave completed another trip around the sun today! (it was just the two of us - we will celebrate Mother's Day and his birthday next weekend with the kids in Los Angeles.) Dave rode his bicycle for 67 minutes, then we met his oldest friends, Mark and Debbie, for a long lunch at our clubhouse.

I have quite a long boring tale to share about Dave's birthday menu. For years and years, while Lisa was growing up, she somehow was convinced her Dad's favorite dinner was a hamburger patty, Kraft Macaroni and Cheese, and steamed broccoli. So for years and years, this is what I prepared on the 26th of April. We are not sure/can't recall (and neither can Lisa) why she felt this was her Dad's favorite meal, because it certainly isn't, wasn't, and will never be. He thinks possibly because he had told Lisa it was one of the menus he and Red would prepare when they were in college?

So while discussing what he wanted to have for dinner on his birthday, we joked about the burger, mac & cheese (homemade!) and broccoli idea. He said, sure why not... but a few days later decided we had eaten too much meat during Passover, so how about only mac & cheese and broccoli... which changed to Aglio Olio (spaghetti with garlic and red chili flakes) and a salad... when he finally decided on Aglio Olio and an Al Capone salad (his favorite from a local Italian restaurant we have not been to for over two years due to Ye Olde Pandemic.) Pasta was the only constant in the entire scenario.

It's not like it was going to be a momentous occasion:

We are now sealed-up inside our house due to the house painters, with an eerie foggy tinge to the light coming in from outdoors. Our patio furniture cushions are piled-up in the living room. Our patio furniture is in a pile-up by the pool, so we can't even dine outdoors. The little blue bistro table in the courtyard is also under a tarp. Currently, we can exit only through the garage or front door. After the back side of the house is painted, they will remove the rear tarps and seal up the front of the house. We would be eating in the dining room tonight, with the air conditioner providing ventilation.

The Al Capone salad consists of sliced tomatoes, artichoke hearts, hearts of palm, red onion and anchovies with a basil vinaigrette. This was easy to make as everything chopped, rinsed and draining by 4p, waiting in the fridge until I sliced the tomatoes.

The garlic and parsley were already chopped for the Aglio Olio. Only thing to do before dinner was boil the pasta.

My bicyclist was so happy with all the carbs! 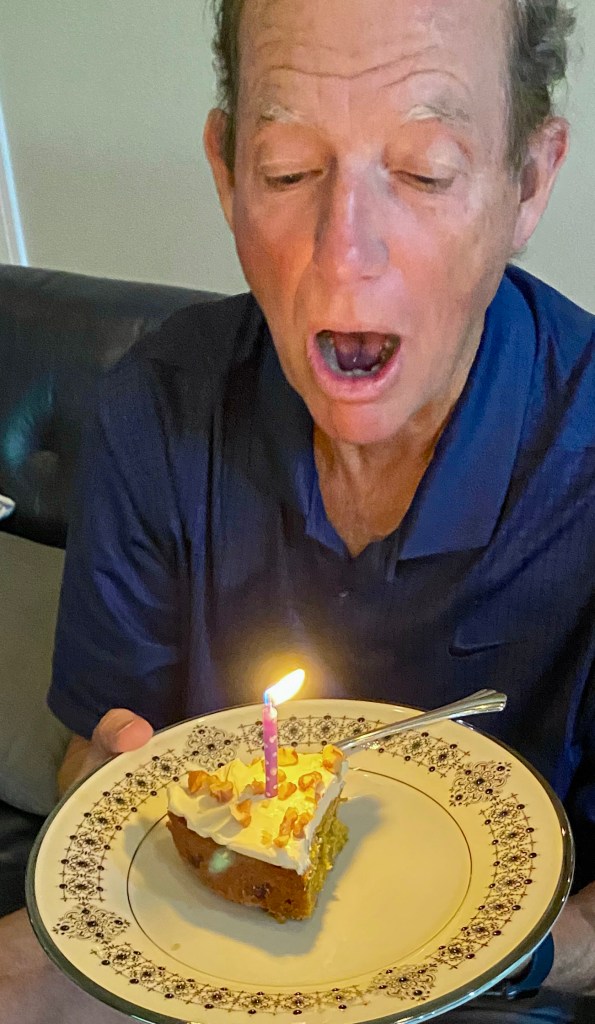 In another shift in tradition, instead of his annual cheesecake, Dave asked for a carrot cake. (Who is this man?) I had to get out the abacus to scale down my recipe to create a little cake, but it turned out so well. The little 6-inch spring-form pan is really turning out to be one of the most-used baking pans in our kitchen. One cake will feed six people and guess how many people are in our family? Really moist. Carrots. Walnuts. Sultanas. Dave was so pleased.

Until my next update, I remain, your "I'm married to an old man" correspondent.