Pasadena, California: There is something I have neglected to report to you, Dear Reader. Something very exciting and important (to us): Lisa and Lenny sold their house, bought a fixer-upper, and have (wisely) decamped to an apartment during the renovation.

As much as they loved their house, it was too large for our minimalist. They rarely used the formal living and dining areas and it was on three levels (a lot of stairs). More important - real estate in Los Angeles is crazy and the price of their house had doubled during the six (yes, only six) years they owned the property. Houses on their street were selling in one day - sometimes over the asking price in bidding wars. I said it was crazy, didn't I?

Their house sold straight away, and they immediately bought a smaller home nearby (the kids will not need to change schools). It is a one-level, three-bedroom, two-bath house that they will remodel to add a family room. You just know Lisa & Lenny will make this new home spectacular. The best part of the new property? It has a mature avocado tree and a guest house! A proper guest house too - with a living room, bedroom, kitchen, bath and laundry. Can you say Bubbe's Bungalow?

We left LA this morning, heading back to Indio, but wanted to make a few stops along the way. First was to look at stemless wine glasses at a Crate and Barrel, and then to try the new Crack Shack chicken restaurant that had just opened in Pasadena. Just my luck, the two stores are one block apart.

After a stop for coffee, we went to Crate & Barrel. Mary had sent me home the other night from her casita (in our golf cart!) with a glass of pinot grigio in one of her pretty stemless wine glasses. DT prefers stemless, and though I do not, with my poor vision, it isn't uncommon for me to knock a wine glass over a few times a year. But poor vision isn't my only physical deficiency. (Well, heck, I have a long list of them.) My hands are really small, and I could barely grip Mary's wine glass, and felt there was a similar risk of glass breakage as it could easily slip out of my hand. This is obviously something Lisa would call a "First-World" problem... but my struggle is real. Rumor was, Crate & Barrel had small stemless wine glasses, so we went to see.

The glasses are identical in shape and size as the bulb-part of our stemmed glasses, so obviously will hold a decent amount of wine, and they fit my hand very well. Plus, they were only $2.95 each ($29.95 if purchased by the dozen) and are made in the USA by Libby. They are not fancy, could never be mistaken for Waterford or Riedel, but are sturdy. We are camping, people! And, yes, I know we should be using acrylic outdoors, but I just can't.

After purchasing a dozen new glasses (party time!), we walked around the corner for an early lunch at the Crack Shack. I was so excited to finally try their famous chicken. It was on our way home, so why not? 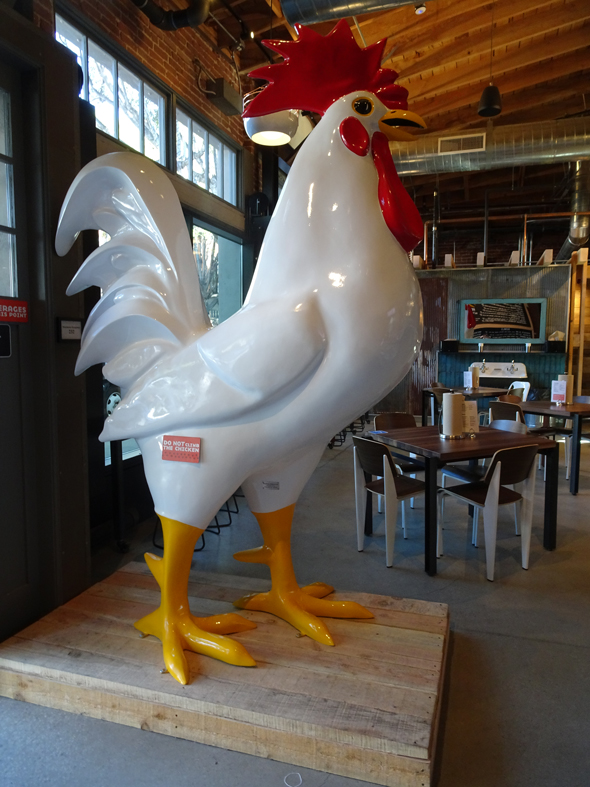 The restaurant is focused on a "chicken and the egg" play-on-words concept, and serve only free-range chickens (and thus, one would assume, eggs). Several of their sandwiches feature a fried egg, and the spice blend used on the fried chicken is as addictive as crack. I don't really care about their marketing plan, but am already pretty-much addicted to fried chicken.

The restaurant space is massive and very attractive. There are exposed-brick walls, and a new arched wooden ceiling. A small bar occupies a back corner, and there is a massive television on one wall. Customers order at a counter at the entry, and dishes are delivered to the table. 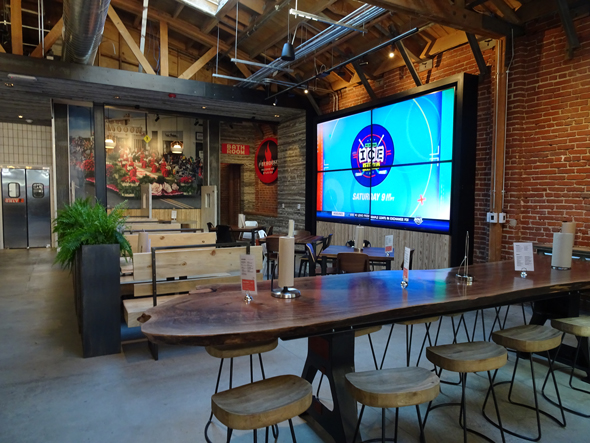 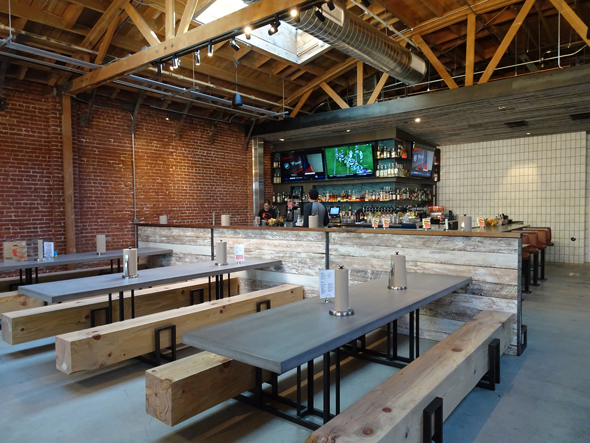 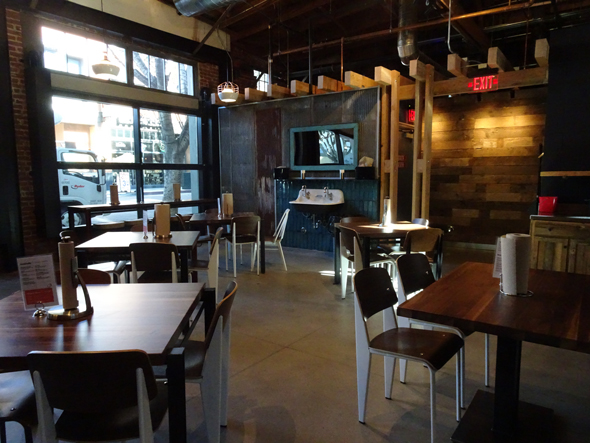 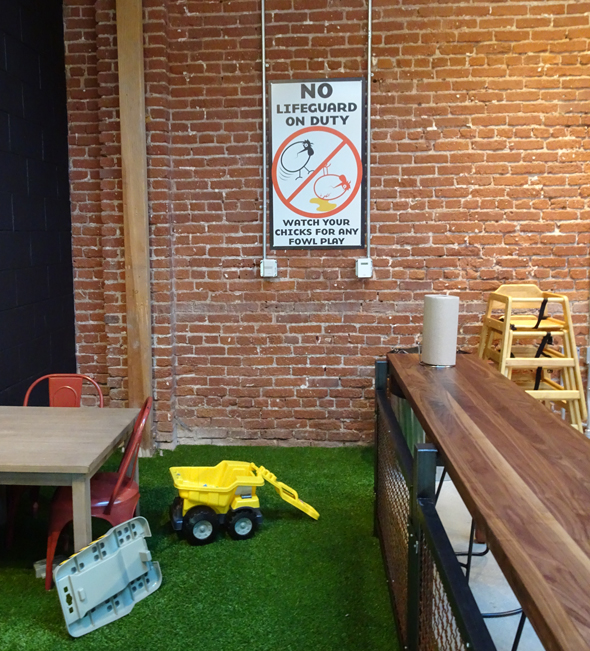 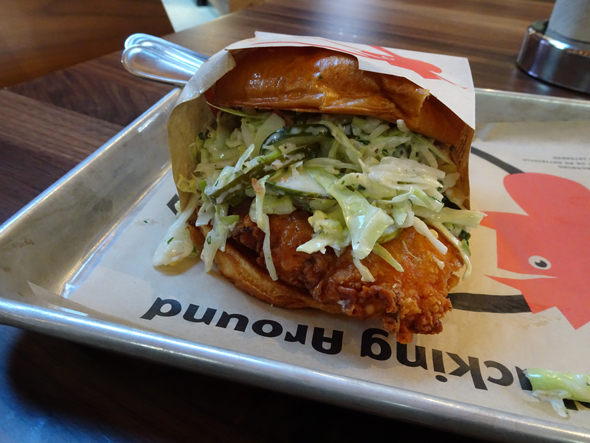 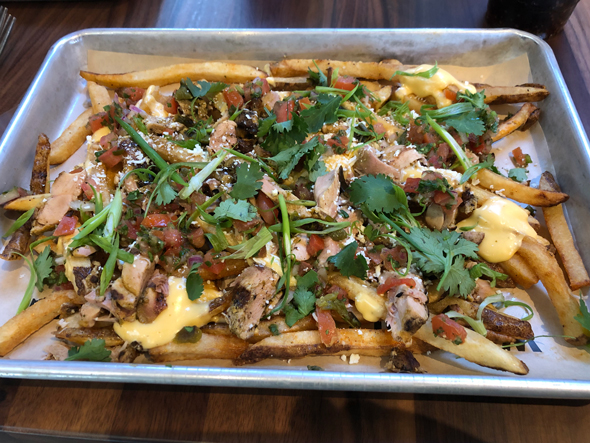 As much as I love fried chicken, I completely caved when I saw Mexican Poutine on the menu. Their potatoes are fried in a mixture of chicken and duck fat. Canada is famed for their poutine (fries, with gravy and melty cheese curds), but the Crack Shack version has the schmaltz-fried-fries as a base, then topped with pollo asado (grilled chicken), jalapeño cheese wiz, and fresh cilantro. OMG, was it ever muy delicioso. Like a combo of poutine and nachos. The chicken was ridiculously tender. Though Crack Shack is currently a SoCal mini-chain, their next store is opening in Las Vegas, Nevada. Old Town Pasadena is really interesting. The streets are very clean, with trees and pretty flowers everywhere. I love exploring the shops and restaurants, and obviously, this chicken business may take more research. Next, I want to try their fried chicken, sold by the whole or half. We drove back to Indio with happy bellies. Until my next update, I remain, your cracked correspondent.

« First Night of Hanukkah Helping Out »