Las Vegas, Nevada: When we learned last year the Oregon v Virginia game would coincide with Steve's 60th birthday, we talked about flying to Virginia. But there is only one thing Steve likes as much as Duck football - and that is a weekend in Las Vegas... so we decided to spend the weekend in Las Vegas and watch the game at a sports bar. Steve, Mary, Woody, Kathy, DT and I booked ourselves plane tickets to Sin City.

Of course Steve & Mary's #4, Cory, lives in Las Vegas, so it was assumed Cory would also be joining us for the game, etc., over the weekend. What Steve did not know? Mary had arranged for their other three children to fly into Las Vegas to celebrate their Dad's Big Day. Surprise!

Steve was clueless, even when their daughter-in-law made a little slip-up, mentioning something about "next weekend in Las Vegas". Even when their dog sitter stopped by their house (their Portland daughters usually watch the dogs when Steve and Mary are away). Even when Steve checked-into their Las Vegas hotel room and the clerk mentioned another person (with their highly-unusual surname) was registered at the hotel that weekend.

Finally, when Steve reached their hotel room and the door to the adjoining room opened and all four kids (and daughter-in-law) appeared, did he put it all together. Mary pulled it off - Steve was completely surprised!

Except for the fact everyone on the plane is happy and excited, it is not fun flying into Las Vegas. The winds are always horrible and the landing is never smooth. The wait for luggage can be up to an hour... and then there is the taxi line that can also be up to one hour. We try to never check bags to Las Vegas, so were off the plane and out to the dreaded taxi within moments of our flight landing mid-afternoon. 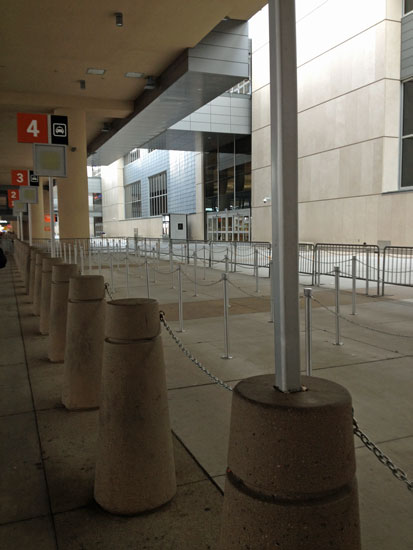 I knew it was going to be a great weekend when we saw not even one single person in line for a taxi! Actually, this may be the only known photo of this space without people! Alert the media.

The view from our hotel room - you can only imagine how much fun it was landing in such stormy weather. And don't let this photo deceive - it was 95 degrees.

Dave and I didn't have much time to get ourselves unpacked and organized, because we had dinner reservations at a sports bar in The Palms Hotel and then tickets to see Bill Maher's comedy act.

I had ordered the tickets to the show - six seats in Row M and five seats in Row L, directly in front of the seats in Row M. When I went to get the tickets, the girl at the desk informed me that they had removed Row M (for sound equipment), so she had placed us all in Row L. 11 seats in a row. I was not happy with this situation and didn't think it would be very communal to have us all strung-out in a line. She offered to get the manager and the manager asked us if we would like a box. 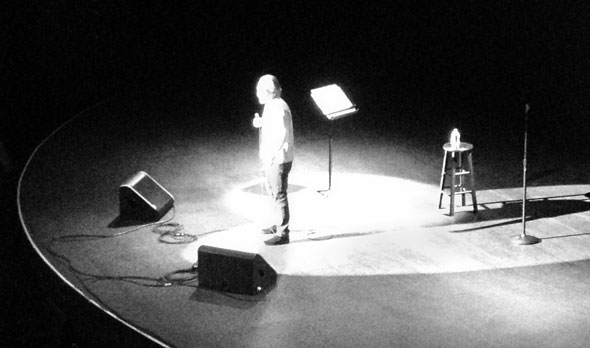 We ended up in the box just over the stage! It had exactly 11 seats and was 1) close to a bathroom and 2) had a cocktail server (in heels and one of those industrial-strength push-up bras typical of Las Vegas cocktail waitresses) at our disposal. 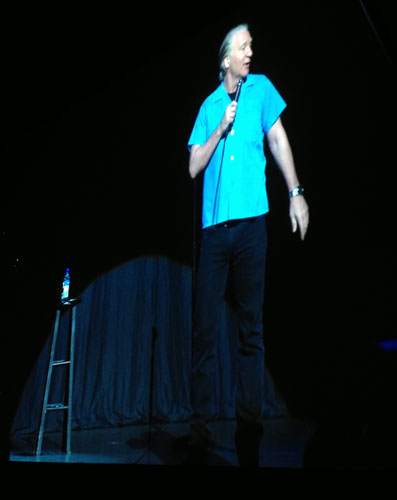 Bill Maher on the big screen

We were all in great moods after laughing for 90 minutes, so before heading back to our hotel, everyone played at the tables at The Palms Hotel and we were all lucky! Let's see if any of that luck rubs-off on our Ducks tomorrow.

Until my next update, I remain, your Las Vegas correspondent.