Los Angeles, California: Spending as much time as we do in Los Angeles, I am getting to know my way around the giant city fairly well. I should be more familiar with city life. Lisa was born in Manila - with a population hovering near 15 million - and then we moved to Taipei where the citizens numbered a puny little six million. I will never appreciate the the things Los Angeles has in common with Manila and Taipei - traffic and smog!

One of my favorite food writers, David Lebovitz, lives in another huge city - Paris. He has written several times about how his bank often has no change. How can a bank be sans change? Probably for the same reason Lisa's local post office has no stamps.

Lenny went to the post office Friday to buy pretty stamps for the baby announcements. No stamps. Lenn was told they would have pretty stamps on Monday. I waited in line at the post office for 30 minutes Monday only to learn the stamps did not arrive. Same thing Tuesday. Same story Wednesday. (Did I ever mention that inefficiency really bugs me?) At this rate, Leo was going to be in high school before his birth announcements were mailed! Lisa caved on Day Three of The Postal Vigil, and decided any old stamp would suffice on Leo's birth announcement. I went to a machine at the post office that vended sheets of non-descript 18 first class stamps. The machine would only allow me to purchase 6 sheets in a 24-hour period! Why? So, I drove to a Wells Fargo ATM - because the ATM also spits-out postage stamps. Out of Order! Luckily, a local supermarket would sell me more. Crazy, but dang, if I don't know my way around Los Angeles now.

Since I am yakking on (and on) about yesterday... last night Lenny & Lisa gave their son a bath. 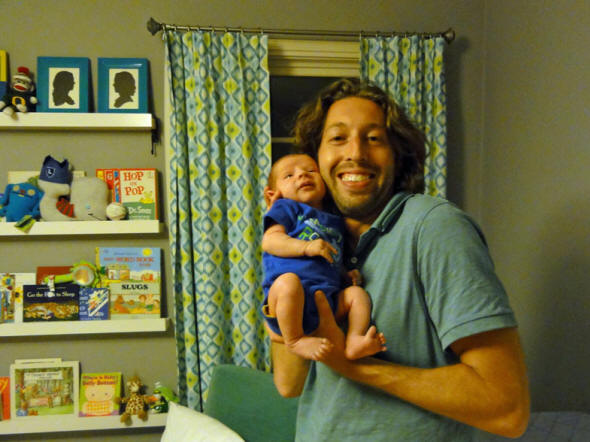 Father and son in Leo's nursery

Leo was screaming during his bath and he turned so red. Since his cord hasn't fallen out/off yet and his circumcision is still a bit tender, they can only give him a sponge-type bath. 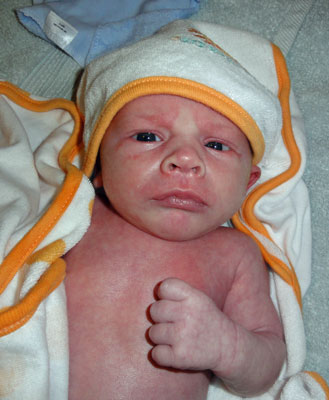 The Little Guy looked like he had just gone 12 rounds. 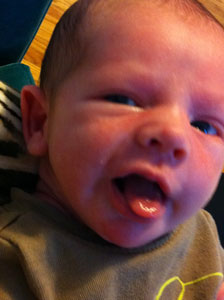 This morning he was quite chipper! This (phone) photo isn't so great, but it shows Leo in a very happy mood. Or maybe he was just passing gas? 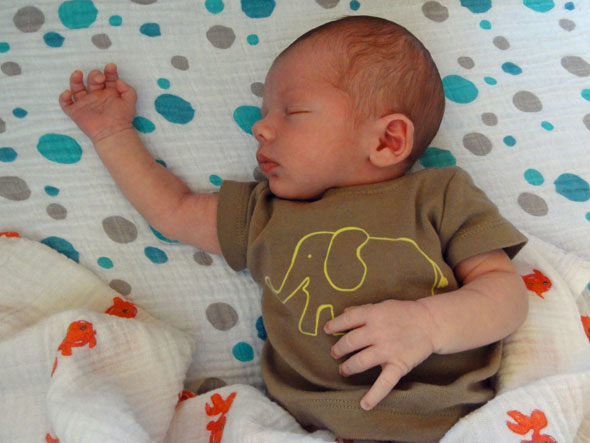 This is right before the innocent little child projectile-pooped all over his Grandma.

I may never be able to eat mustard again. 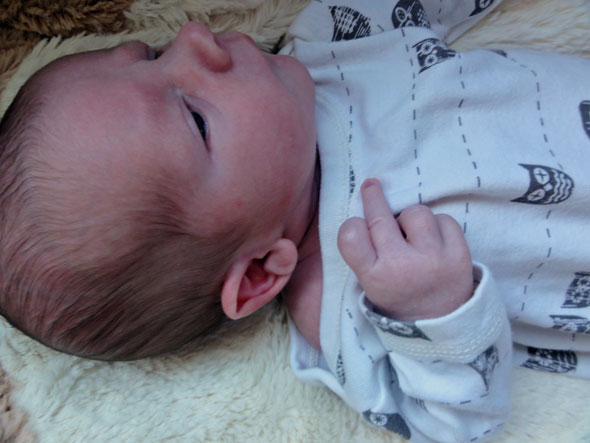 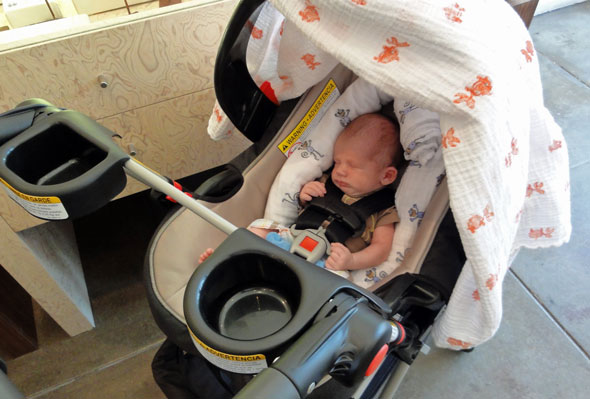 After I finished cleaning myself/Leo up and after I had finished cleaning/polishing Lisa's hardwood floors, we took Leo out for a little adventure. In reality, Lisa just wanted to get out of the house. We went shopping in the charming village of Los Feliz and had lunch at a little French Bistro. Leo slept in his stroller the entire time. Actually, his car seat snaps out of a permanently-mounted base in the car - and then snaps into a stroller base! So clever and it all weighs next-to-nothing. Lenny has a car seat base in his car too. Modern babies! The stroller is small (doesn't take up the entire restaurant, as some tend to do) and it folds flat in a snap. Good choice, Lisa & Lenny! Even Bubbe could figure it all out. 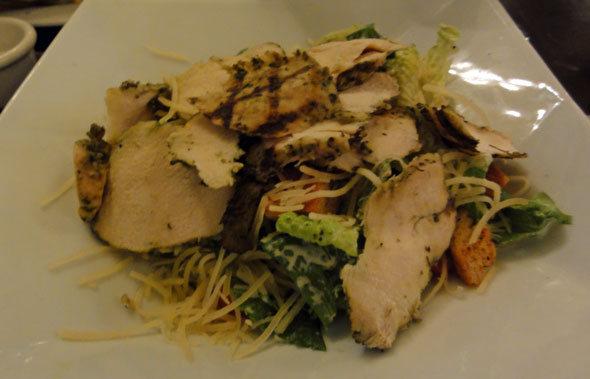 Ladies who lunch have chicken Caesar Salads! Delish... even though I was roasting a chicken for dinner tonight. Oh, well. 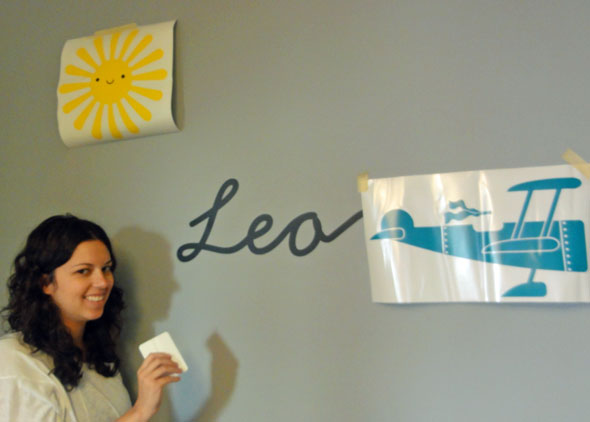 Back at the ranch... Lisa ordered very cool stick-on mural thingies from etsy for the wall above Leo's crib. She had looked at the decals a few months ago, but did not order the art until he was born... just in case he did not seem like a "Leo". The process is fairly simple, but is labor intensive. She taped the decals to the wall to see how it would look and then went to work. Lisa used the squeegee thing (in her hand) to rub the decals on the wall and then the clear vinyl is removed, leaving only the decal. Clever! 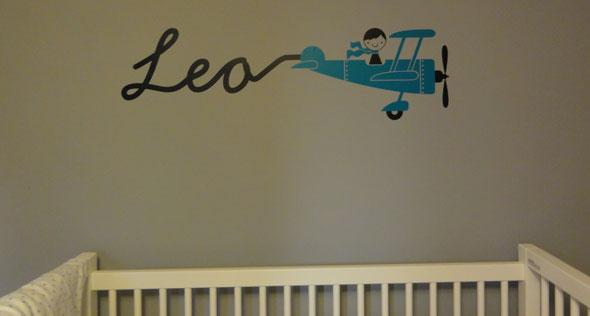 Isn't that just adorable? There is also a moon, clouds, birds and a rainbow to "install", but she is going to look at the airplane for a few days before deciding where to place the other bits.

As we say in Portland: Put a Bird on It! 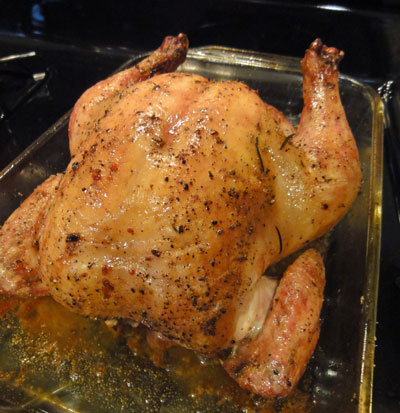 Speaking of birds... I roasted an organic 5.6 pound bird tonight. I stuffed the cavity with a lemon, fresh sage, rosemary and thyme. Lenny proclaimed it the best meal of the week. 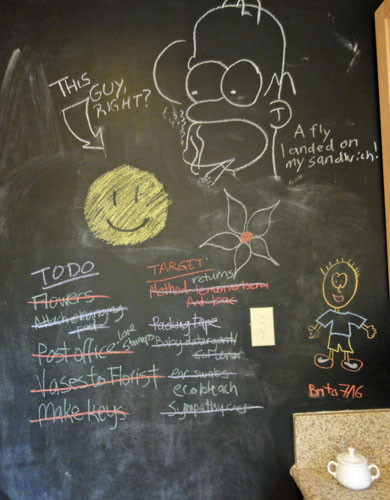 Chalk board wall in Lisa's kitchen

And my work is done here. I will fly home tomorrow afternoon! Lenny's folks will be here next week and Lisa will have a new TO DO LIST for them! 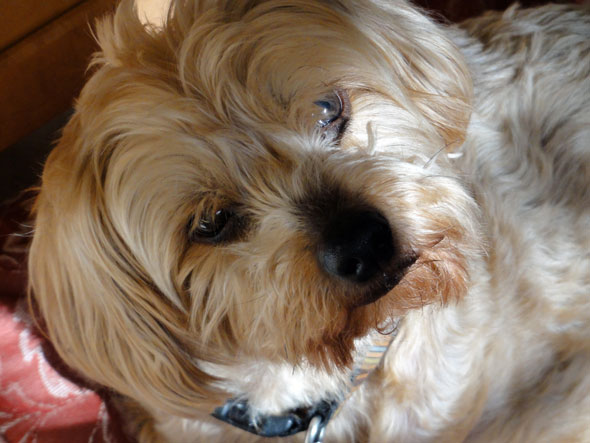 You didn't forget about our Grand Dawg did you? Reese is adapting very well to his little competition. Reese is so sweet with Leo! Reese has been quite fair with his time - sleeping with me part of the time - but sleeps with Lisa & Lenny most of the night. I may have given Reese a bit of chicken after dinner... so maybe he will favor me with his company tonight.

Until my next update, from Portland, I remain, your cleansed correspondent.
« The News from Here Home Again »