Indio, California: It is Spring Break for LA schools, so Lisa brought the kids over yesterday to spend several days with us. Lenny (work!) will join us tomorrow. It is so nice to have the kids here and the weather is supposed to be very nice - finally getting into the 90s - this week. Last night I told the grandkids I was too dang tired to cook dinner, so they would have to make their own dinner. They were a bit confused until I told them they were going to roll out their own fresh (from Trader Joe) pizza dough, brush on sauce (from a can), cheese (already shredded in a bag), and top their personal-sized creation with their choice of sliced olives, green peppers and mushrooms (okay, I actually had to chop a few veggies). Bubba forgot to put sauce on his pizza, so he had "flat bread" instead? It wasn't too much work for me, and I only had to make a quick tossed salad to serve with their masterpieces. Really a fun meal. Dave golfed today with friends from Portland. Lisa and I took the kids on long bike rides, which made them very hungry. Lunch was consumed at Stuft Pizza (no, we did not have more pizza) in Old Town La Quinta. The grandkids always like to visit Nitrofusions Ice Cream, also in Old Town. At this establishment, ice cream is made instantly before your eyes using liquid nitrogen to freeze the cream. Leo ordered the kid-sized chocolate with gummy bears in a chocolate-dipped waffle cone. Lucy asked for the same, except with strawberry ice cream. They each watched their ice cream freeze - along with the noise and icy-fog caused by the -321° liquid nitrogen. They are always fascinated watching the process. 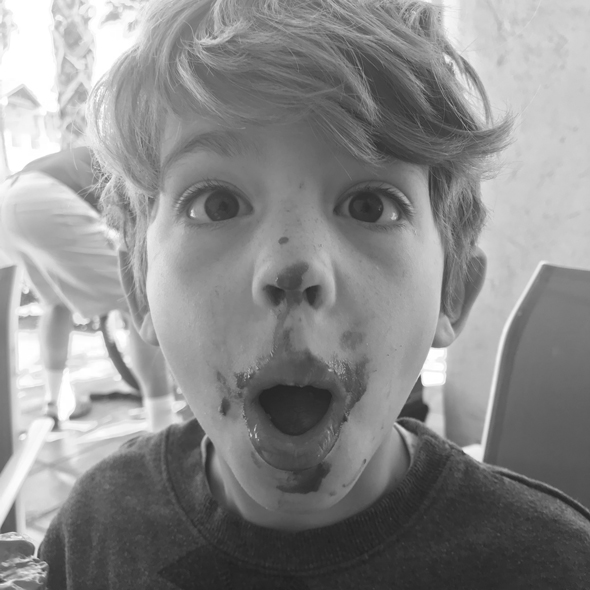 Circus Vargas had their big blue tent set up in the mall parking lot in Palm Desert for several days, and it looked like a lot of fun. We went - especially since the current performance has a pirate theme and Leo just loves pirates. Tonight was their last performance in this town, but they tour throughout California all spring and continue around the country. Don't miss the show if they come to your town. 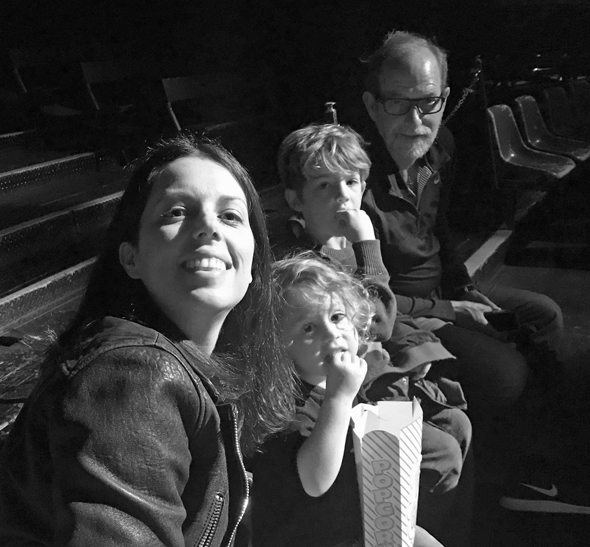 Snacking of popcorn before the show Circus Vargas perform without animals. It is a European-style one-ring circus featuring trapeze artists, gymnasts, jugglers, clowns, aerialists, tight-rope walkers, a woman who flies above the crowd suspended only by her hair, magicians, motorcycle stunt people and various sorts of performers one would expect at a circus. The artists are from every corner of the globe, the costumes are amazing, the physiques are outstanding, and everyone is always smiling - even when being strapped into a bed of knives. We really enjoyed the show! Here is a less-than-two-minute-long video I put together of our experience:

PALM DESERT SHOW NOTES: We bought Arena Seating tickets. Arena seating is first come/first serve. Our seats were less than $30 each with senior and child pricing. Bleacher seats were available for $15; VIP seats for about $65. The show is just over two hours long, with one intermission while the trapeze nets are hoisted. The usual circus snacks are available for purchase - popcorn, cotton candy - and they also sell an assortment of light-up pirate paraphernalia as souvenirs. Porta-potties only.

Until my next update, I remain, your "but I'm still not joining the circus" correspondent.