Los Angeles, California: Lisa had prepared a very extensive schedule for our weekend visit. Lists. Things the four of us needed to accomplish. DT and I were ready this morning. Luckily, Lisa and Lenny were smart enough to deliver hot caffeine to our room at 8 o'clock and fueled us with a great breakfast at the Mustard Seed Cafe before our hour-long trip to Lowe's in Burbank. 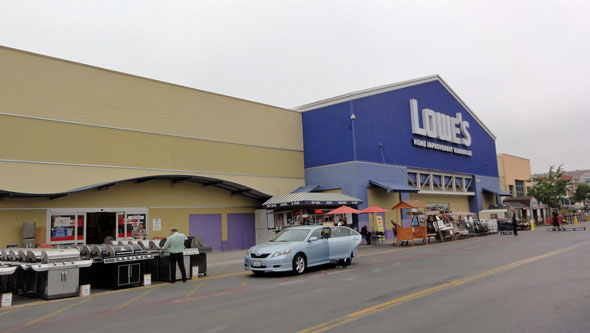 This is the Lowe's in Burbank, California (where Lenny had a 10%-off coupon!). I think it looks exactly like the Lowe's in Des Moines, Atlanta or Denver, so maybe you can not actually trust my photography tonight. 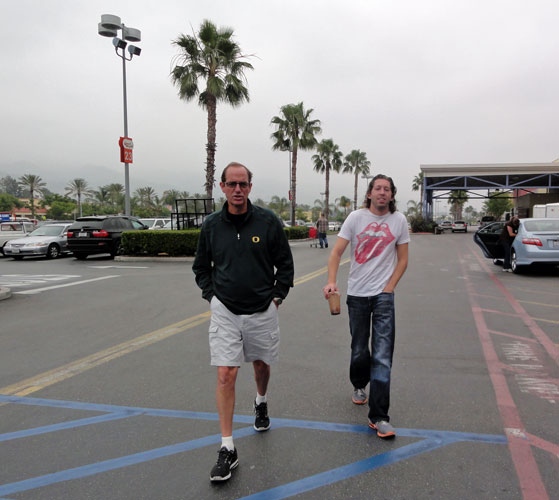 DT and Lenny. On a mission. Their Mission (which they chose to accept) was to Fulfill Lisa's Shopping List. 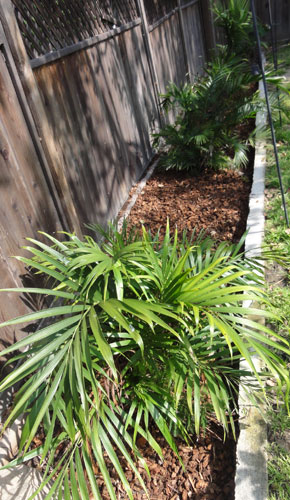 Chores today included weeding the succulent garden along the front entry walkway - and adding more decorative rock. Next, we planted an additional palm tree in the back garden, weeded the bed and spread 8 huge bags of bark mulch long the fence wall.

The entire exterior of the house was hosed-down and the windows were washed - inside and out. Then we moved inside for a bit to hang the curtains Lisa & Lenny had ordered for the nursery. 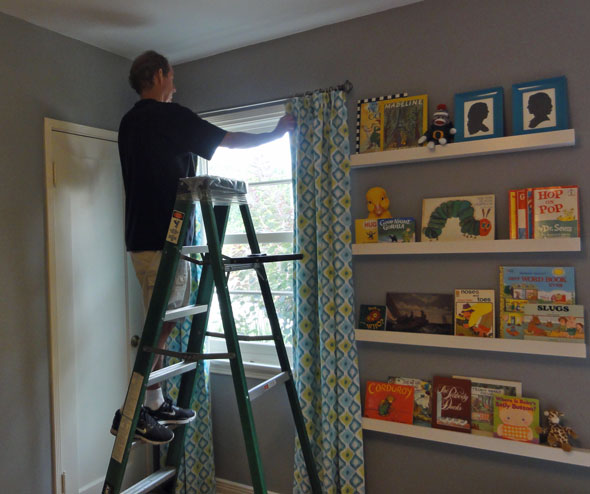 DT used power tools to drill the drapery hardware into the plaster 80-year-old walls. (Dang if I just don't love plaster walls - no molly bolts!) We know the history of the house and know this is the first baby ever to be living here! Bring on the karma! 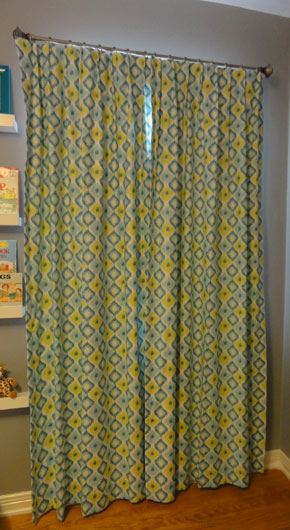 The Ikat curtains are simply perfect. Heavily-lined, they will make the nursery dark if the baby needs/wants a nap during the day. Dave did a great job!

After the drapes were perfect, Lisa made us all cheese and corn quesadillas. She was busy preparing lunch when she realized she had forgotten Pico de Gallo (fresh salsa) and asked Lenny to run over to the nearby Trader Joe's. Lenny went into the store and asked for "Cinco de Mayo". The Trader Joe employee smiled and asked Lenny if he meant "Pico de Gallo"? When Lenny answered yes, the TJ guy asked Lenny where he was from.

While Lenny was at Trader Joe's and Lisa was preparing lunch, Brother Kent showed up from Merced. He is in town to attend a wedding - so stopped by to see the list/chore progression and we enjoyed a gourmet lunch (which I forgot to photograph!)

After lunch, we sent the kids back to Lowe's to buy new garden hoses and a few other items we forgot earlier this morning.

Is it ever possible to make a singular trip to Lowe's???

While Lisa & Lenny were away, the old folks put the crib together.

DT used power tools to drill the drapery hardware into the plaster 80-year-old walls. (Dang if I just don't love plaster walls - no molly bolts!) We know the history of the house and know this is the first baby ever to be living here! Bring on the karma! 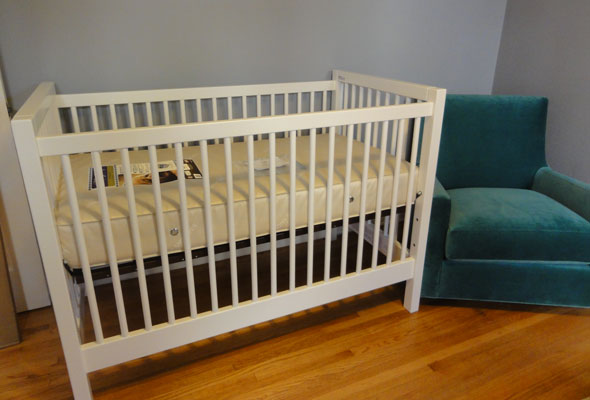 Honestly? I was dreading this chore. I was imagining a massive bag of hardware and a pages-long list of instructions. Apparently times have changed drastically since we had a baby drop-rail cribs have been banned from western society. Eight bolts + Four hex screws = the crib was assembled. Super simple. We spent more time recycling the packaging than we spent assembling the cot. 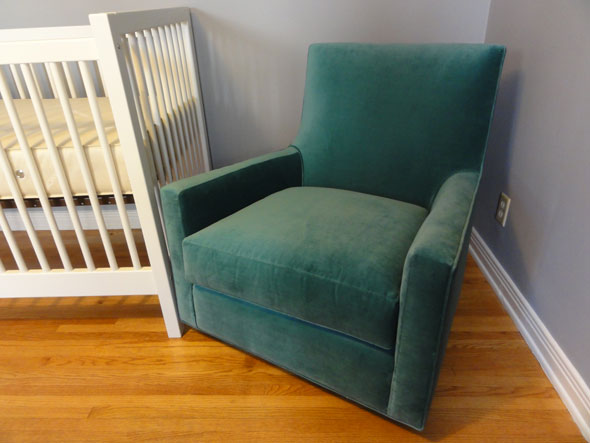 Somewhere between Lowe's and weeding... Lenny found time to drive out somewhere in Orange County to fetch the glider/rocker chair. It is very comfortable. If history repeats itself, I can tell you this chair will see a lot of use.

(PS: None of the furniture is placed where it will be placed after DT and I leave and roll-up the queen aerobed/elephant in the room is stowed.) 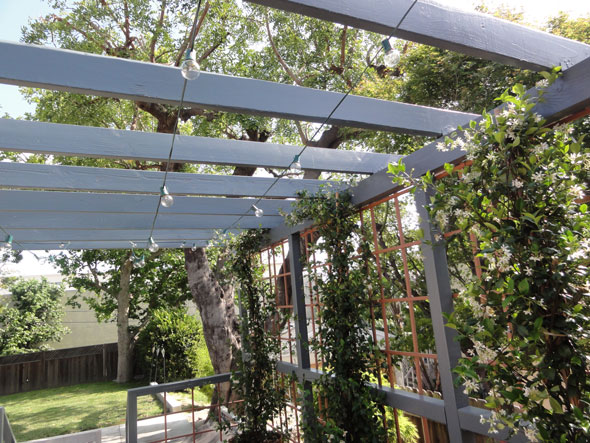 One last chore was to hang pretty patio lights. Lisa had ordered lights to a specific length (carefully measured) to drape over the patio. DT carefully installed clever little clips that would hold the bulb-string in place. Then we hosed-off the patio and admired our work. 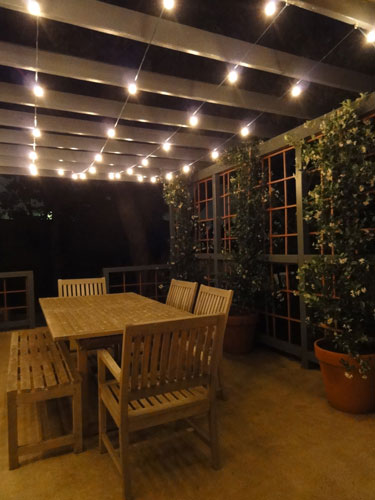 If that isn't just pretty!

We stopped working at 8 o'clock. Lisa had a local Chinese restaurant on the itinerary. This was quickly out-voted by long hot showers followed by martinis and take-out pizza from Farfalla Trattoria. The NCAA track meet was being re-shown on television. A nearly perfect ending to a great day of solid hard work. Dave and I will probably be too sore to get out of bed in the morning. We worked so hard today, there are only two small chores to finish in the morning! Old People Rule!

Just in case you were all wondering... our boy Matthew Centrowitz, Jr., is the 2011 NCAA 1500m Champion. Not that there was any doubt. The Duck men finished tenth in the country, and the women's team finished 2nd. Not exactly what the Ducks were looking for, but most respectable if you ask me. (And no one ever asks me.)

Until my next update, I remain, your exhausted correspondent.
« Five Photos Finished »