Santa Rosa, California: Since the rain continues, we decided to have an indoor activity today and visited the Charles M. Schulz Museum in Santa Rosa. Schulz, creator of the famed Peanuts comic strip, was a long-time resident of Santa Rosa. Born in Minneapolis in 1922, Schulz was nicknamed Sparky at two-days-old by his uncle, and this name stuck with Schulz throughout his life. He served in the Army in WWII, married several times, had five children, and moved to the Santa Rosa area in 1958, where his cartooning career blossomed.

The museum opened in 2002, the year Schulz died. It houses the largest collection of his strips and memorabilia, including all the furnishing of his drawing studio. 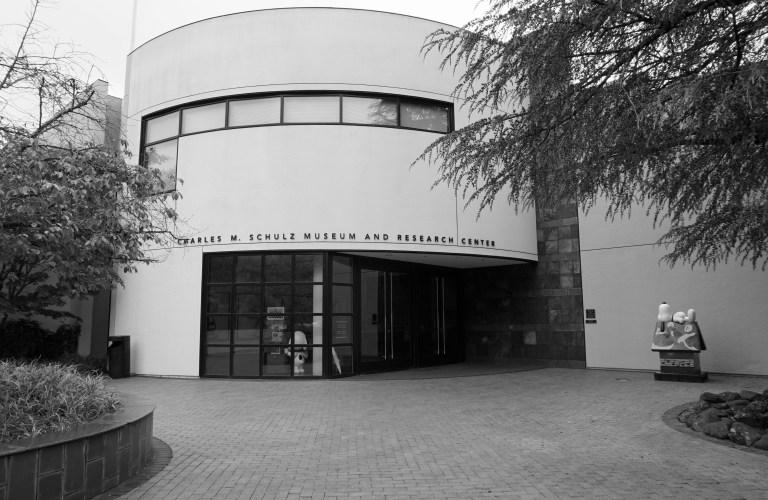 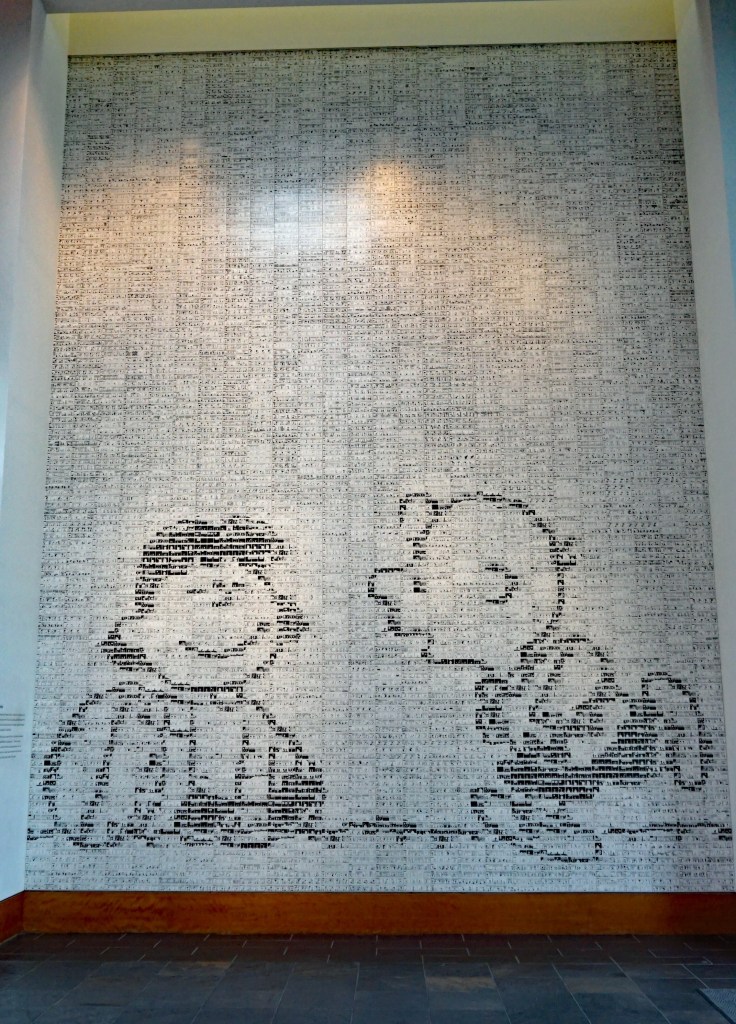 A prominent wall in the museum atrium is covered by a tile mosaic made of 3588 comic strips (about 10 years worth of strips from 1956-1988) composed by Japanese artist Yoshiteru Otani to form one of the most iconic scenes of the Peanutsstrip – poor Charlie Brown never kicking a football. 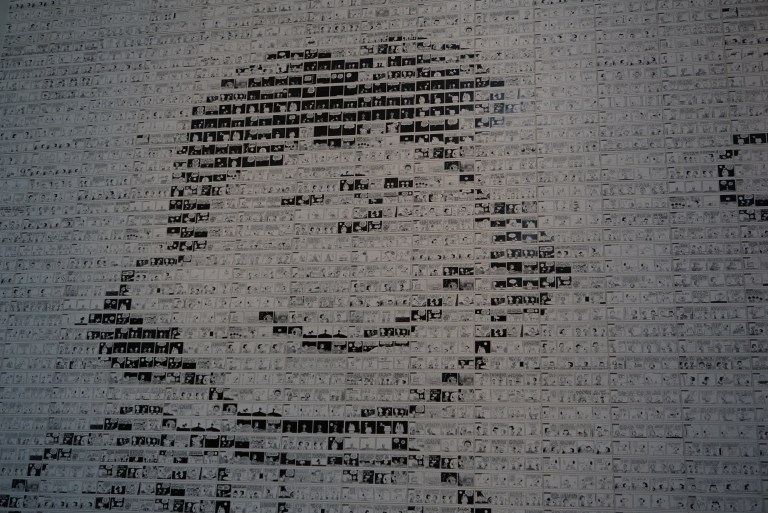 Close-up of the mosiac

Yoshiteru Otani also created a wooden piece depicting the beginning of Snoopy, starting (left) as Schulz’s boyhood dog, Spike (not a beagle), to a dog who could walk on two legs (and fly a plane).

We learned so much today about the shy Mr. Schulz, including that he had a crush on a red-haired girl when he was very young. His first love became the muse for Charlie Brown’s crush on his own little red haired girl. Many of the Peanutscharacters were named after the cartoonists own friends.

This year is the 50th anniversary of the introduction of Woodstock into the Peanutscomic strip, and the main exposition hall in the museum is currently devoted to the little bird who started as Snoopy’s (female) secretary, but developed into his pal, and eventually, male. Birds first appeared in the strip in 1953, but they did bird things and Snoopy chased them. 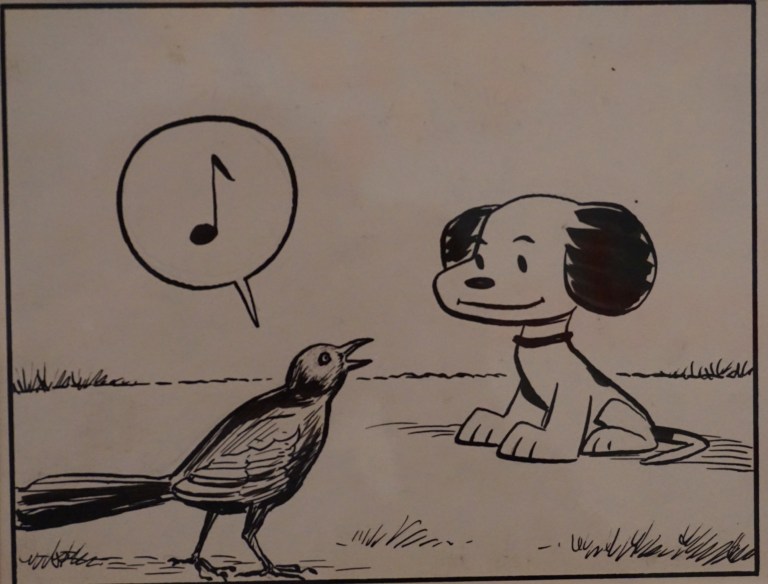 Woodstock (eventually named after the 1969 music festival) first appeared in the Spring of 1967, and most-decidedly did not do bird things. Woodstock could type, ice skate (play hockey and drive a Zamboni), cook, play football, and play bridge. Woodstock was terrible at flying, always spinning upside down, and not far off the ground. Woodstock is left-handed. 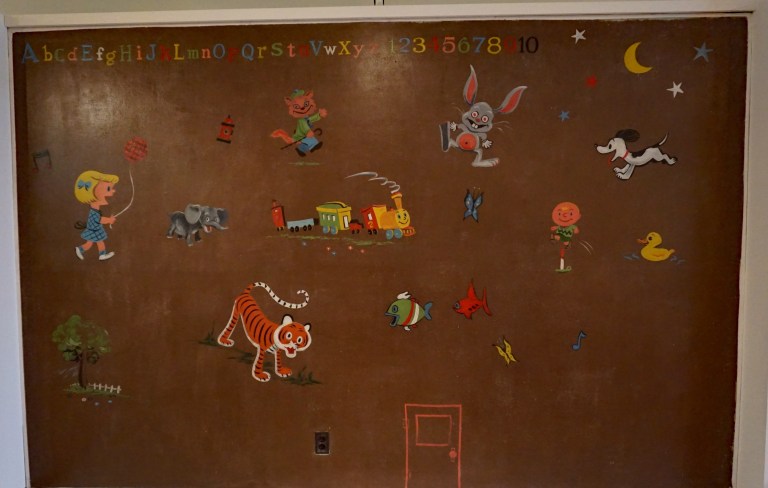 The museum houses a wall painted by Schulz in 1951 for his daughter’s bedroom. It had been
painted-over many times, but restored. Early versions of Charlie Brown and Snoopy can be seen, top right. 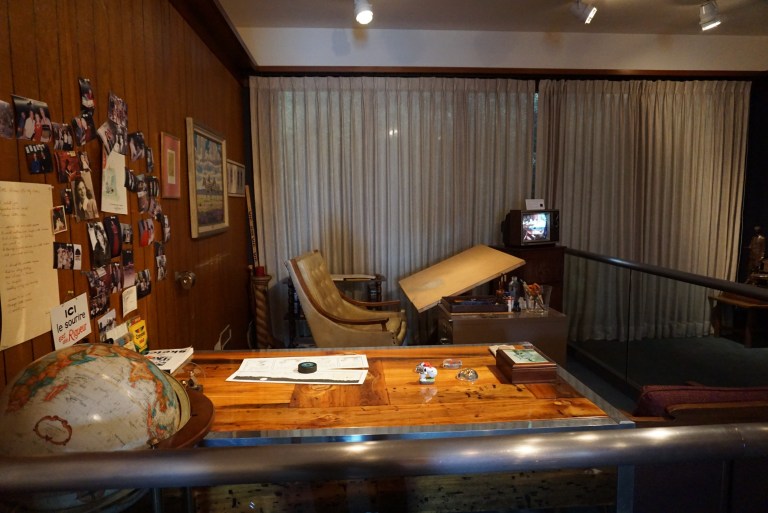 The artist’s studio – moved to the museum 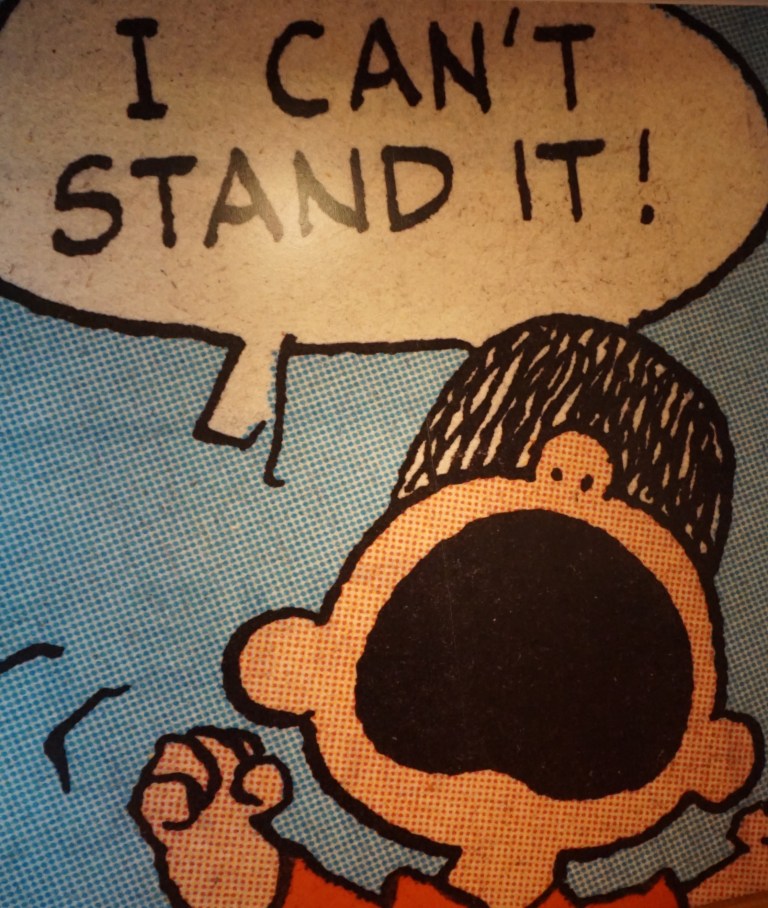 After touring through the museum, we walked across the street to see the hockey arena built by Schulz 50 years ago. He was a huge hockey fan (growing up in Minnesota) his entire life and loved to skate. The arena is under-going a complete renovation, so this is what we saw today: 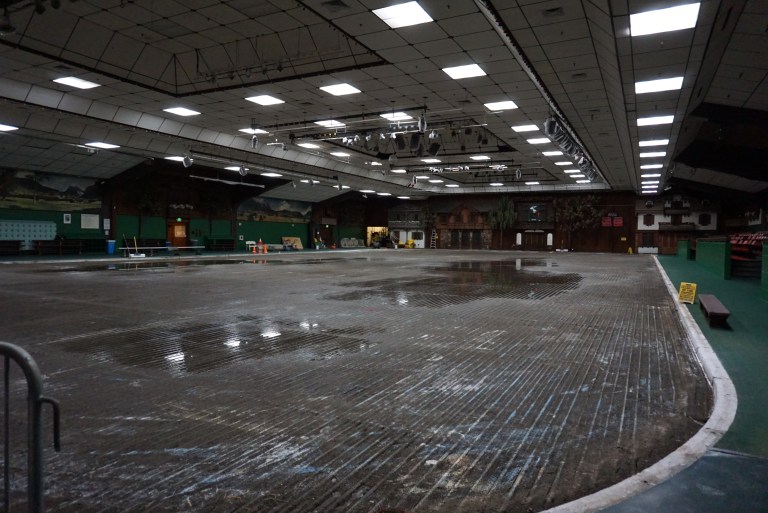 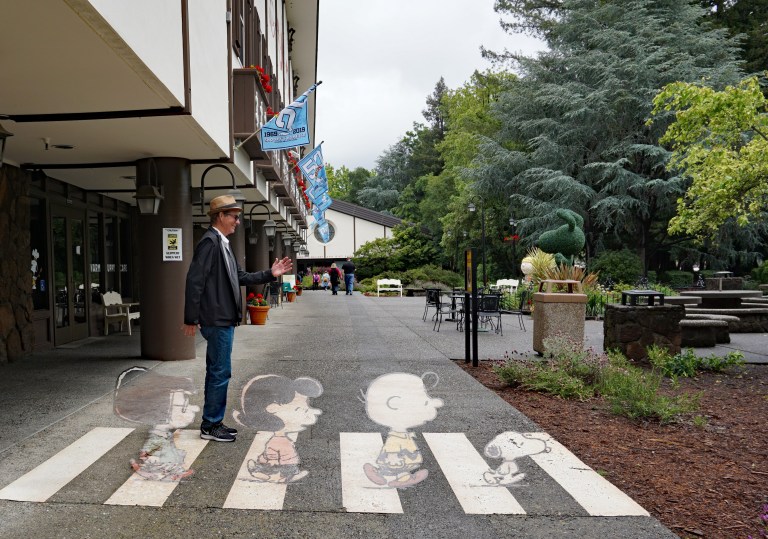 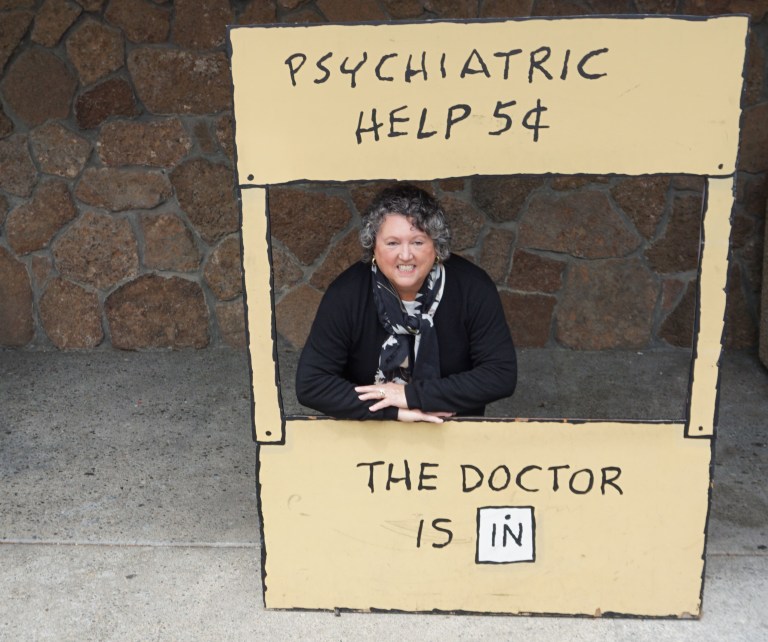 After we left the museum (and gift shop), we drove to the Historic Courthouse Square in Santa Rosa and walked into the first restaurant we could find – it was raining and the wind was absolutely howling. We had read about Perch + Plow, so were happy our luck/parking spot deposited us to their door. Long after the lunch crowd had dissipated, we had no problem finding a seat and enjoyed really good meals. 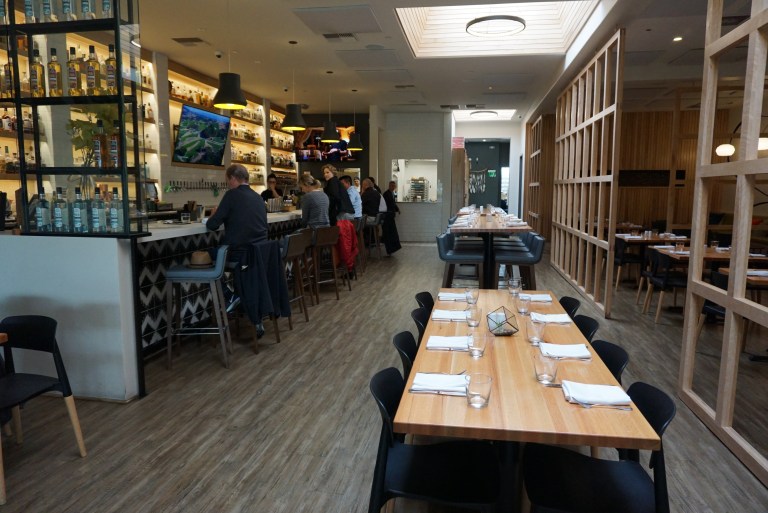 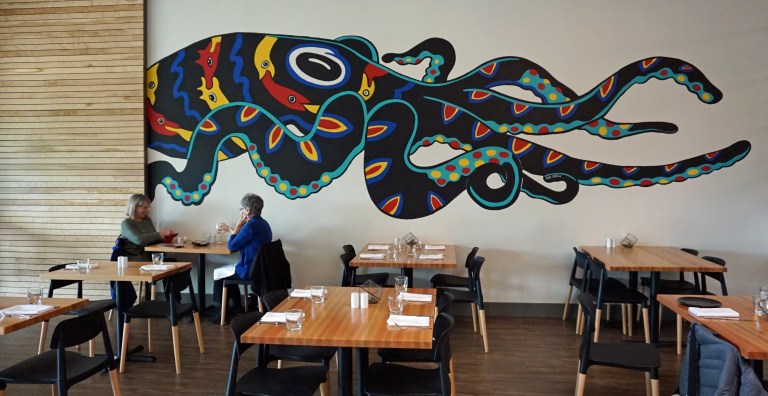 No dinner again tonight for us. We are hunkered-down with the floor heaters blasting.

We have an adventure planned tomorrow, as it is supposed to stop raining overnight. Stay tuned.

Until my next update, I remain, your cartoonish correspondent.

RV PARK:  Sonoma County Fair RV Park. It is a gravel parking lot with not even one single pull-through site. Full-service 50 amp. We are paying $40.50 per night, after Good Sam discount.