Canyonville, Oregon:  I haven't updated for several days. There has been no time. Nor reason. Our itinerary changed Friday morning. And not for the better. 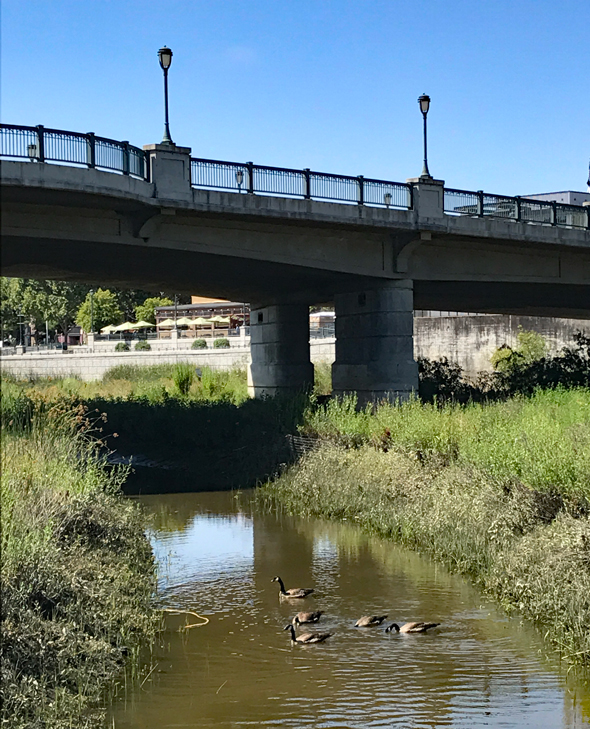 Along the Napa River bike bath

Friday morning, DT went out for a three-mile walk. He is slowly recovering from meniscus surgery on his left knee in February and is still unable to jog. After his walk, he met up with me, so we could walk another three miles together along the pretty new bike paths along the Napa River.

Mural at 1st & Main in Napa depicting 19th century Napa, created by Steve Dela Maggiora and
Susan Clifford. None of the buildings in the mural now exist.

About a half mile from the campground, DT winced. His right knee (his GOOD knee) was giving him a lot of pain. By the time he limped back to the motorhome, it was swollen, and he couldn't put weight on the leg. This was not good.

Dave cannot walk. He is just getting around using his cane once again.

There was no reason - yet - to go to a doctor or emergency clinic. He iced the knee and put his leg up. We waited. No improvement. We asked the RV park if we could extend our stay for a few days. To be honest, the manager did not actually laugh at our request to get into the nicest RV park in Napa over the 4th of July weekend. He tried. He went to the fairground office. I went to the fairground office. It would be impossible. We would have to leave Saturday morning. No matter if My Driver could not drive. (NOTE: I can't drive the RV due to my eyesight. Or my lack of eyesight.)

With all the gourmet restaurants within miles of us, we stayed-in on Friday night. I made a simple pasta dish and a salad. I needlepointed, and DT iced his knee. Lucy's Hello Kitty canvas (for a pillow) is finished! It was so easy and went so quickly. 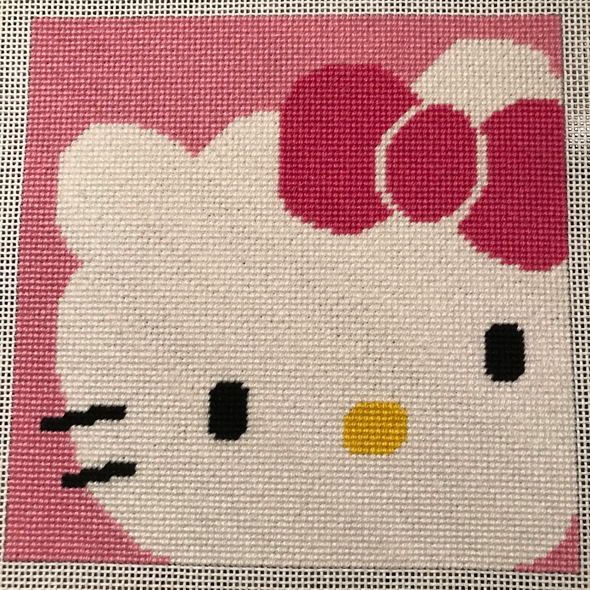 And since we have been away, my finisher has completed all of the canvases I stitched while in Indio over the winter. Our house sitter snapped photos of the finished pillows and sent them to my phone. One of the pillows is a kitty canvas Lucy chose herownself: 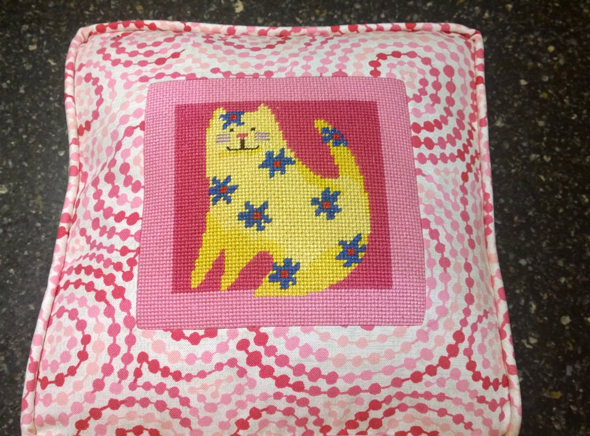 The fabric matches the window shades in Lucy's bedroom... of course... as Lisa always says: there is nothing a toddler loves more than needlepoint.

So on Saturday morning, quite late, we left the perfect Napa Valley and all the restaurants, shops and vineyards and headed north on I-5... though it took us more than two hours to reach I-5 from Napa. Holiday weekend traffic? There were several accidents. It was hot. My Driver used a brace on his newly-sore knee, but was unable to make use of the cruise control feature due to the terrible stop-and-go traffic. Now his ankle was also swelling!

Due to the heat, I made use of the old crockpot-in-the-sink trick. At a family dinner before the track meet in Sacramento, I was served a lamb shank the size of Cleveland. It went directly from a doggie bag to the RV freezer and on Saturday morning I added onion, carrots, celery, mushrooms, lentils and chicken stock. The stew bubbled away all day in the slow cooker. Dinner was served when we arrived to the Durango RV Resort in Red Bluff (where we had stayed on our way south a few weeks ago). 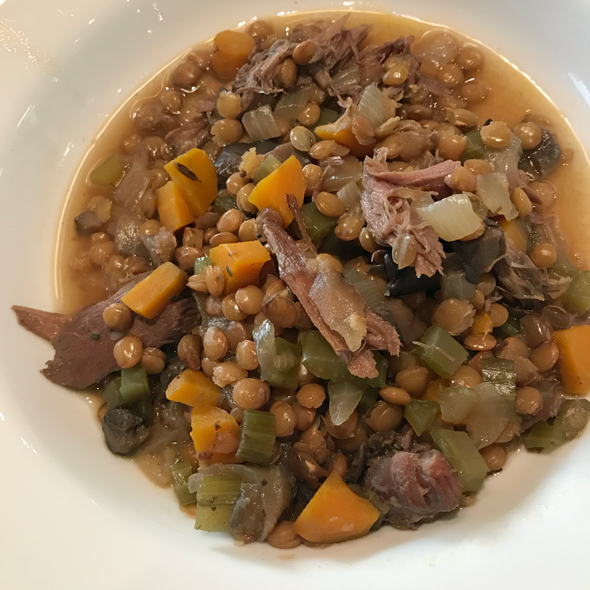 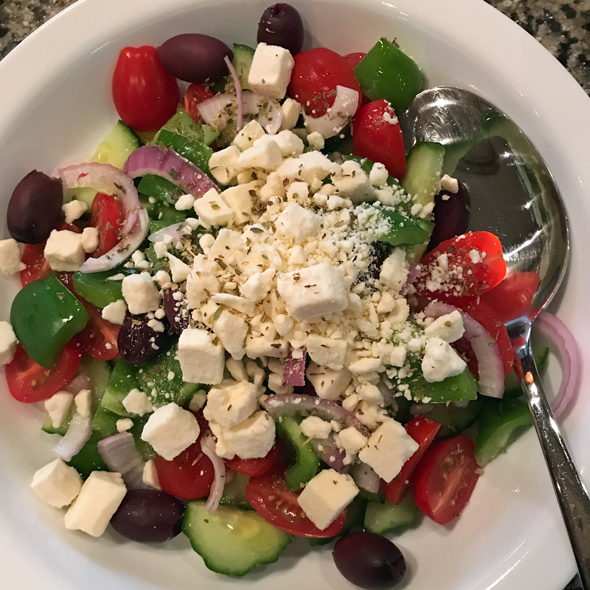 Served with a nice Greek salad

SIDE NOTE: Five nights in Napa and we never did get around to visiting a vineyard.

UPDATE FROM COLORADO: Lisa, Lenny, Leo and Lucy have flown out to Colorado to visit my Baby Bro Steve and Kris, and to attend a family (Lenny's cousin) wedding. (Lucy was so excited to fly on an airplane to "Avocado"!) Brother Steve sent a few photos of the visit. 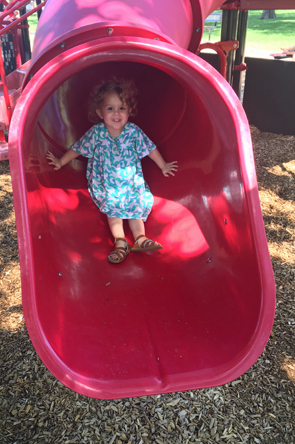 They had hipster tacos, went to a park, went on a walk and had a lot of other fun visiting Steve and Kris.

UPDATE FROM POSSUM KINGDOM: Yes, Dear Readers, there is a place called Possum Kingdom and it is a reservoir in Texas. I giggle every time I hear the name of the lake. MCC posse members, Crystal and Brent, have a vacation home on Possum Kingdom, and today Bill and Tom joined them (in their motorhome) for a 4th of July weekend on the lake. Half of our MCC posse are together this weekend! 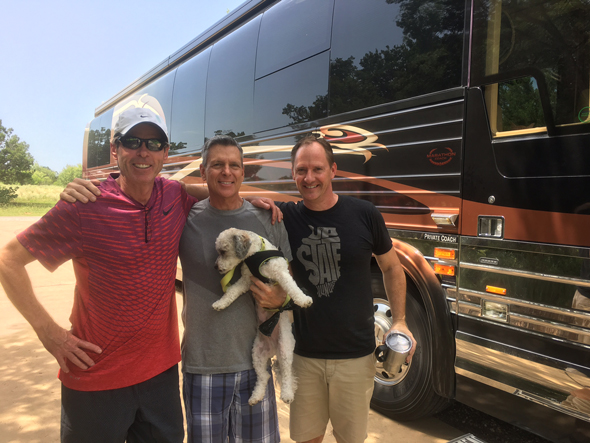 Brent, Bill and Tom, with Jackson (aka Pandaman) 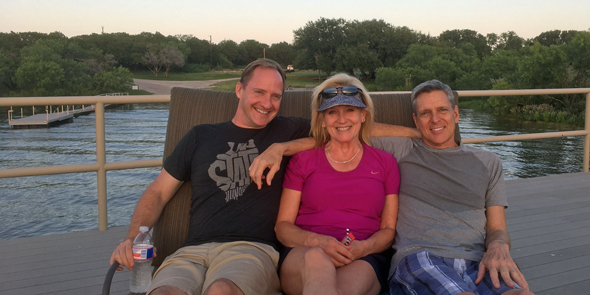 So while the kids are enjoying Colorado and our friends are enjoying a holiday weekend in Possum Kingdom (!), we were driving north on I-5 again today. We only stopped once for a break along the Klamath River just before crossing the border into Oregon. My Driver has seen no improvement to his knee. 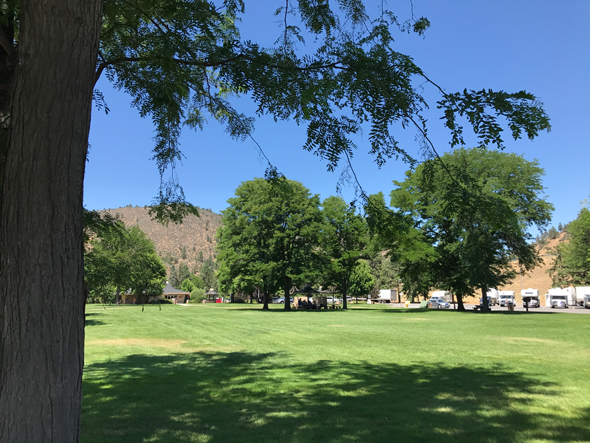 Considering nearly every rest area in the State of California along I-5 seems to be CLOSED (ugh!), we were so happy to find one of our favorite stops (about ten miles south of the Oregon-California border) still open. Only one of the two bathroom buildings were open, but the place was gorgeous. The lawns were irrigated and mowed. Trash cans had been emptied. It was very very hot this afternoon, so we enjoyed the shady lawn. 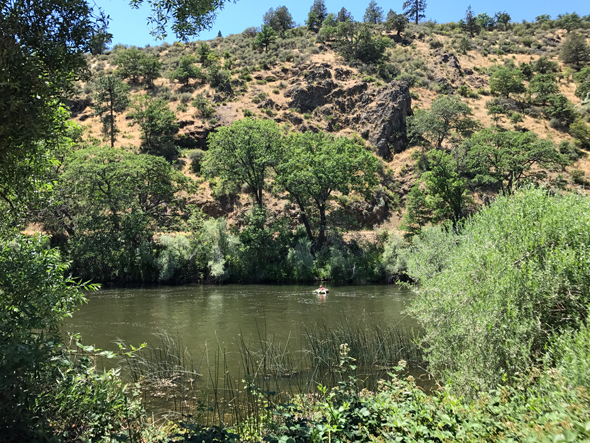 The Klamath River runs alongside the rest area. We saw rafters and people floating down the river in tubes. It must have been soooo refreshing.

At about 4p, we pulled-over to our usual spot - Seven Feathers RV Resort - at exit 99 on I-5 in southern Oregon. It was still very warm.

I went about making the dough for our habitual Sunday night pizza and Dave and I sat outside in the shade chatting with fellow campers. The RV park is really full - I assume due to the long holiday weekend - and with the hot weather, people were outside enjoying the evening breezes.

Maybe our fancy GE Advantium oven died? I suspect so. It seems to be a theme with our nearly-nine-year-old appliances.

What is a hungry girl to do with a soggy half-cooked pizza? 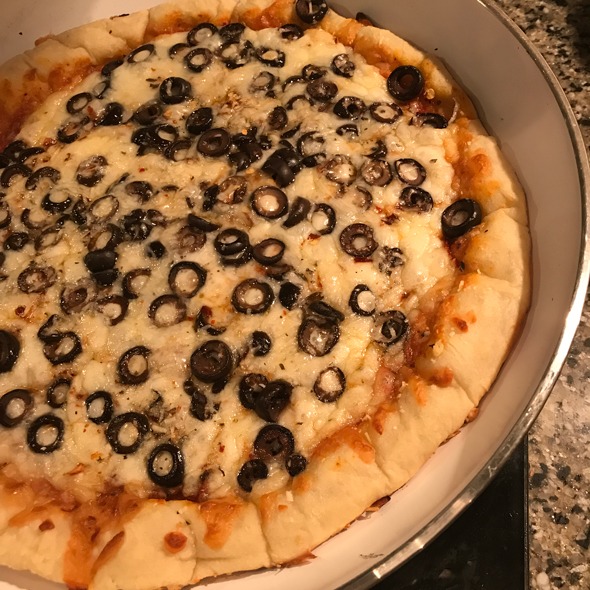 Impromptu skillet/oven pizza! I slid the pie into a large nonstick skillet and let is sizzle on low until the cheese in the middle was bubbly. 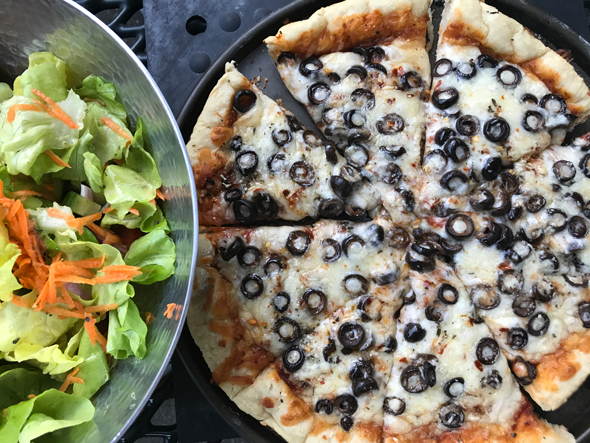 I've made worse pizzas. The crust was definitely crispy.

Considering DT's knee issues and a dead oven... with the kids off having fun in Colorado and our friends together in PK (yes, Possum Kingdom is known locally as PK!) I suppose the day just wasn't that bad.

Plus, we had wine.