Okay... so I may have mentioned we over-did-it quite a bit last week and I am trying to be (mostly) good this week where my diet/exercise is concerned.

But have I gone too far pretending cauliflower is steak?

When the Thanksgiving issue of Food & Wine arrived in the mail the other day - loaded with vegetarian recipes - I just couldn't help myself and ripped-out several recipes to try. Their recipe for Cauliflower Filet really intrigued me.

Did you know I (make that "we") was vegetarian for 12 years? It's true. Shouldn't really surprise you. By reading this blog, it is easy to see we still eat vegetarian several nights a week.

(So let's just all forget about the debauchery that was last week's tailgate party. Somewhere out there, 24 chickens are walking around without wings.)

The Food & Wine recipe calls for slicing thick slabs out of a head of cauliflower, browning the "steaks", topping it with fresh corn-off-the-cob sauteed with chilies, green onion and capers, and then roasting the entire mess in the oven. Vegan, even! 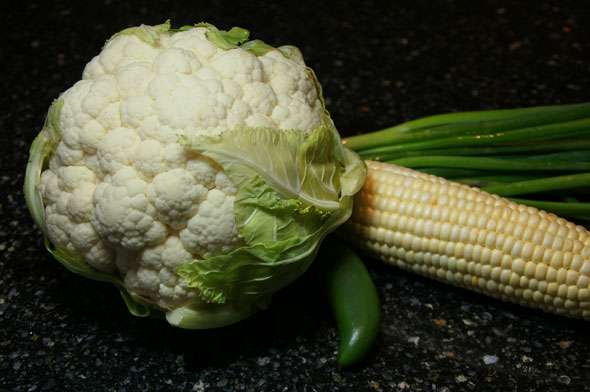 Just a few ingredients - cauliflower, corn, green onion, chili pepper and capers. My market did not have hot red chilies, so I used jalapeno. (Also, the magazine is for 6 portions and I only had two to feed. I used one head of cauliflower, one ear of corn, 2 green onions, half of a jalapeno and one teaspoon of capers.) 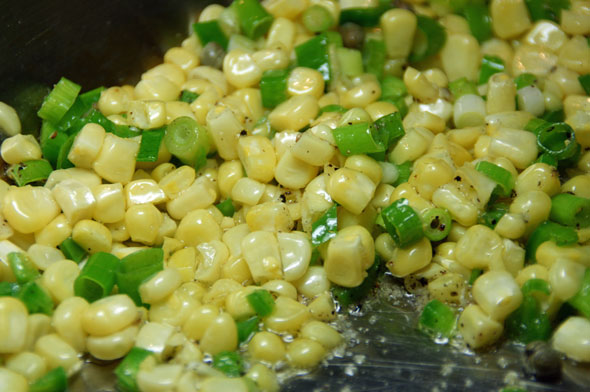 I don't know about you, but that seems like way too many pots & pans for me. Imagine if you were making this in your RV? Too many dishes to wash!

I just removed the corn from the raw cob. Why boil it for three lousy minutes? I have been sauteing corn-off-the-cob for years with fabulous results. (Not to mention, it was all going into the oven for 25 minutes.) The corn was sauteed in 2 tablespoons of (I used olive oil instead of the requested vegetable oil) olive oil for about two minutes, then I added the jalapeno, the green onion, capers and finally threw in a little Kosher salt & lots of black pepper. I removed the corn mixture to a small plate. 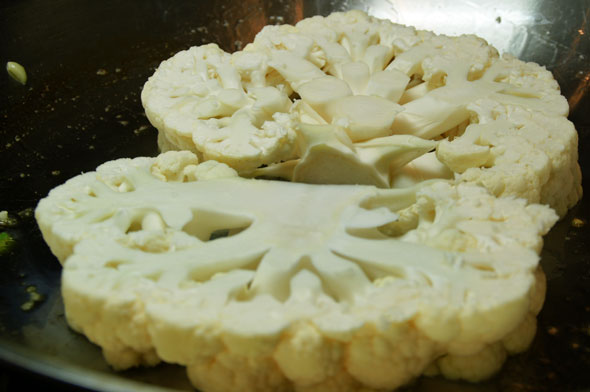 Then - throwing caution to the wind - I browned the cauliflower "steaks" in the same saute pan. 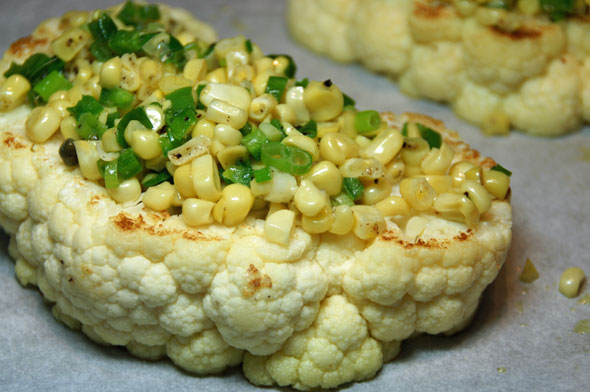 After the cauliflower filets were browned, the corn mixture was piled-on and pushed-down into the crevices of the cauliflower. The "steaks" were placed on a parchment paper-lined baking sheet and roasted at 375 degrees for 25 minutes. 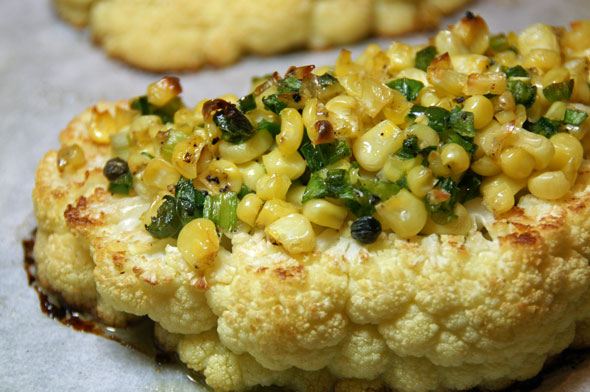 The filets came out of the oven browned and very pretty. 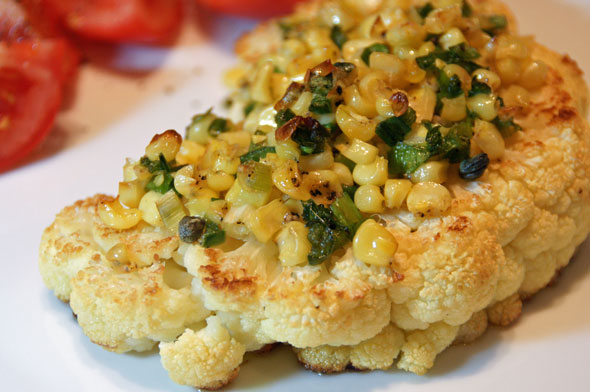 I served the filets with a tomato salad. It was delicious. The jalapeno was a little spicy. The corn had a nice texture and the cauliflower still had a bit of a "crunch" factor. If you have a vegetarian/vegan coming for Thanksgiving, this would be a great main course. The steaks can be made in advance and baked at the last minute. Since (probably) no fresh corn will be available in November, could frozen corn be substituted? Hmmm...

I really liked this dish. Delicious and very different. I only had one skillet to wash - the parchment paper-lined baking sheet needed no attention. Save pans and save the planet - this recipe is a keeper.

Until my next update, I remain, your 54-year-old correspondent.