Track Town, USA: I know there is a big track meet happening in Eugene this week, but most of today's post is about Leo. Sorry. He leaves Friday afternoon, and then I will get back to the other topic. I did see several athletes at Lisa & Lenny's hotel this morning, including Lopez Lomong and Andrew Wheating.

The races didn't start until late afternoon, so I spent the morning with the kids while DT worked. We went to lunch and visited a toy store before heading over to the track. 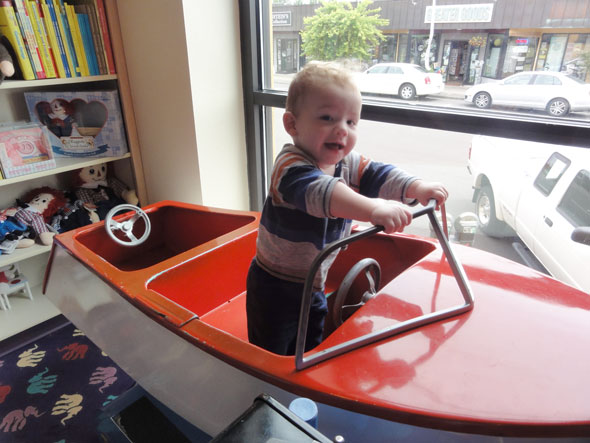 Leo thought the 50-cent boat ride in the corner of the toy store was the greatest thing. Here I present 16-seconds of Leo rocking-out on the USS Rip-Off, while watching his Momma:

Lisa is wondering if they can get one of these things installed at their house ASAP. 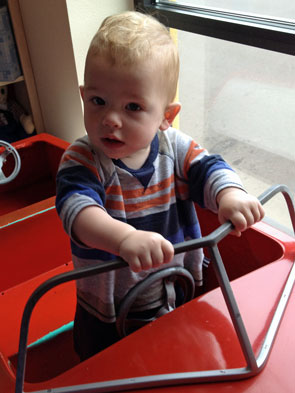 Little Dude is always smiling (except when he is crying and, yes, he does have his moments) and happy and curious and funny. Leo was not happy when I pried his fingers off the boat. Luckily, there were many things in the toy shop to immediately distract him.

Off to the track!

This evening held one of the top programs for events that I enjoy. As the US trails are following the London Olympic event schedule as closely as possible, the men's & women's 1500m racers must run a preliminary heat to advance to a semi-final and then 12 will race in the final on Sunday. That is a lot of work. All the favorites (and all my favorites) moved on to the next round. Sadly, our friend, Lauren Fleshman, failed in her bid to make the US women's 5000m team. The men's 5000m final was very exciting - with Galen Rupp, Bernard Lagat and Lopez Lomong heading to London. Rupp ran 13:22.67 to break Steve Prefontaine's 40-year-old mark from the 1972 Olympic Trials. Wow. See the USATF website for all the results.

Near the end of the meet, several athletes ran a lap around the track modeling the uniforms the USA team will be wearing in London:

US Olympic Team athletes are provided clothing to race in - from one-piece speed suits for the sprinters to the usual kits for longer distances - and track suits for pre/post race and another to wear if you make it to the Victory Stand in London... plus, I assume, a big duffle bag to carry it all. They also receive clothing to wear in the opening and closing ceremonies. (Hope they get a lot of luggage allowance from the airlines!)

This afternoon, Poor Little Leo (and his parents) was introduced to so many people! He was admired by Dave's co-workers, passing strangers, meet officials, friends and athletes. Leo was able to spend a little time with his Grandpa and they had their photo taken together: 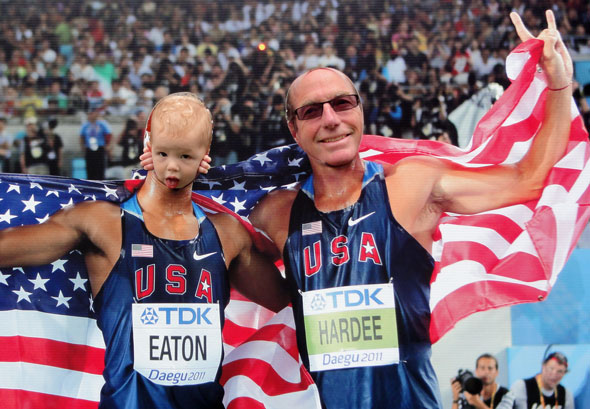 Hey, speaking of Ashton Eaton (aren't I always?) - his fiance, just-graduated Duck Brianne Theisen, made the Canadian Heptathlon team and will also be traveling to London! GO DUCKS!

Leo crashed-out right after the track meet, so the kids went back to their hotel. DT and I remained in the hospitality tent drinking beer chatting with our friends and enjoying live music at the fan festival. Dave's co-worker and US Olympic Javelin team member, Cyrus Hostetler, posed for a photo with DT: 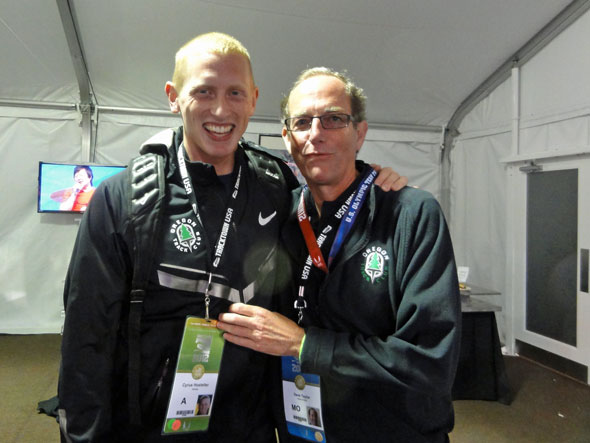 Another great day at the track, with only a little bit of rain. Tomorrow, we do it all again.

Until my next update, I remain, your seasick correspondent.
« Family & Friends Before the Deluge »