Portland, Oregon:  The Birthday Celebration just never stops! We brought the Birthday Boy home with us this morning. Why not? Leo doesn't start kindergarten until August 15th, so this was our perfect opportunity to spend a week with Our Favorite Grandson. (Lisa, Lenny and Lucy were not invited.) We are going camping!

And by "camping"... I mean in our 45-foot motorcoach. We are bringing ingredients to make S'mores, so it is officially "camping", right?

We boarded our flight and were seated in First Class. Not because we are fancy-pants. The flight from LA to Portland isn't even two hours in duration and the Alaska shuttle we usually fly doesn't even have a first class cabin - every seat is cattle-class. Recently, Alaska Airlines added a few new Brazilian mid-range Embraer 175 jets to their fleet, and were offering screaming deals to frequent flyers the day I was booking flights. The 76-passenger jets have a dozen first-class seats, so we booked a quarter of the section for DT, Leo and myself. (PS: we were seated near a very handsome soap opera star! Do not ask me his name because I do not know his name. He is on a soap opera and he is handsome. That is all I know.) 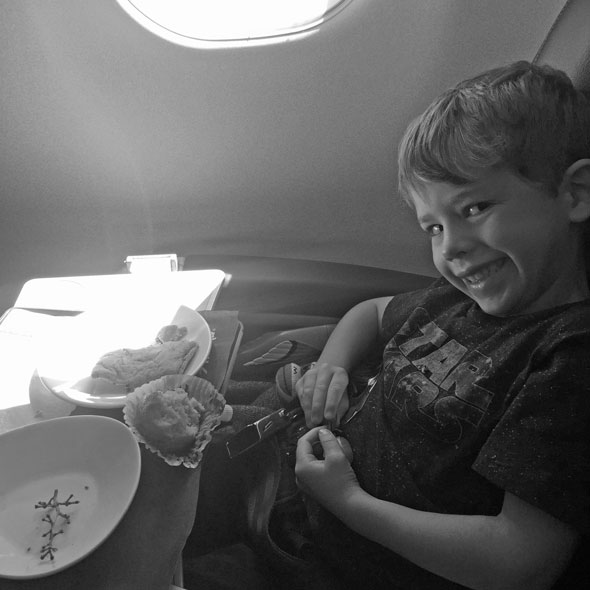 Oh, hi. I'm sitting in First Class and just washed my hands with a steamy-hot towel, and then was served a bowl of fruit, a blueberry muffin and an egg and spinach flatbread thingy-dealy.

When the air hostess came by and asked for drink orders, I ordered a black coffee. She offered Leo juice, water, sparkling water, blah, blah, blah and it wasn't until a Coke was delivered to Leo I realized this Bubbe had been hoodwinked by a five year old. Ten minutes under our care and already a huge grandparenting food fail.

Sweet Leo confided to me that he nearly cried when he said goodbye to his parents at the airport. He wasn't ashamed to cry, but didn't want to upset his Mom because he thought she was going to cry. How sensitive is this dear child? Leo did not see Lisa cry because she was wearing massive dark sunglasses, but I saw her tears falling. 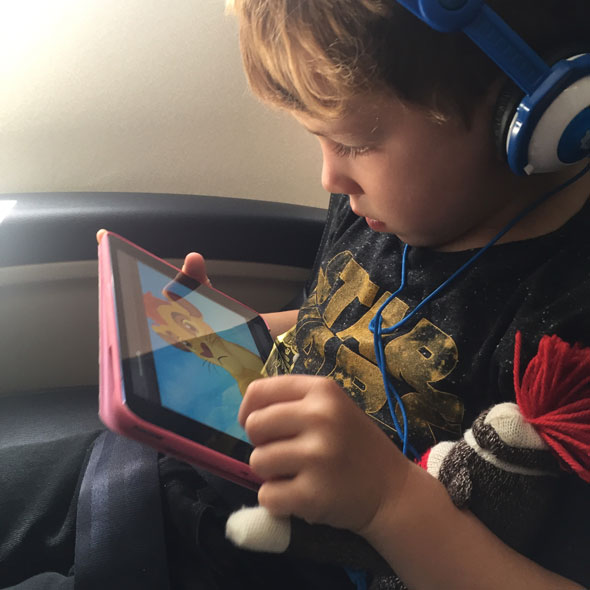 After breakfast, Mr. Jetsetter plugged-in his headphones and watched a few Lion Guard videos until we landed in Portland. 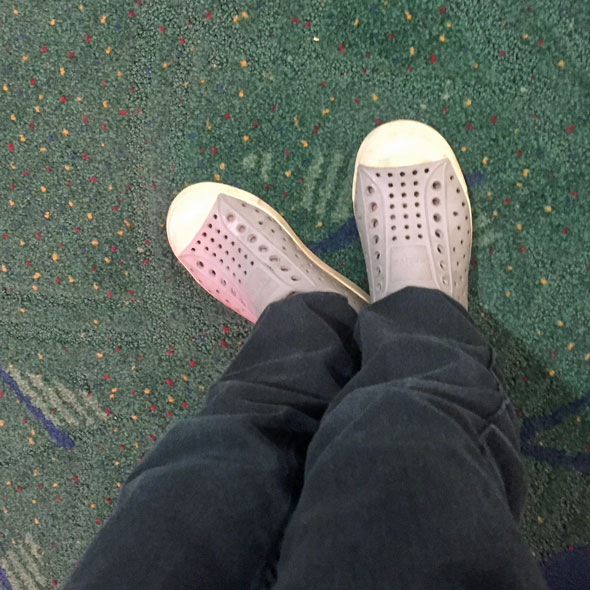 Leo napped in his car seat all the way from the airport to our house and was ready to play. Dave and Leo began to construct one (of the many) Star Wars Lego kits Leo received for his birthday. 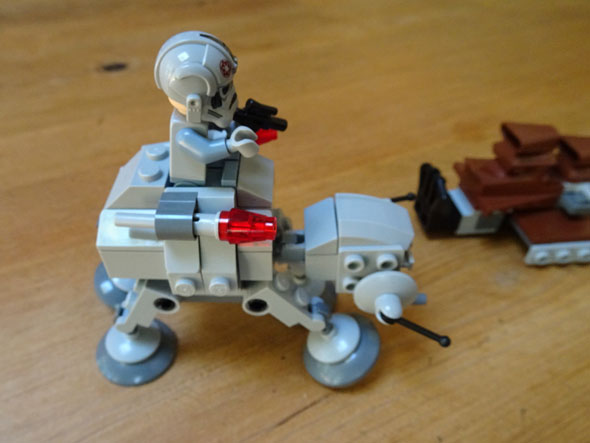 This Bubbe has menus planned for our camping trip and a shopping list organized! I ran out and quickly filled the list, Leo and I baked cookies for our trip, and then we met Mary, Steve, Lynn, Chris, Laura and Baby Cole at Pizzicato for dinner. 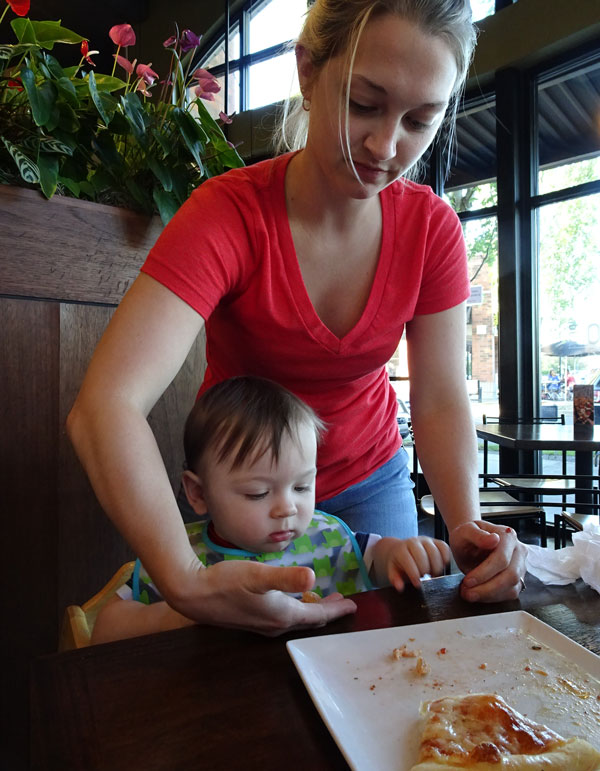 Laura, with her son, Cole 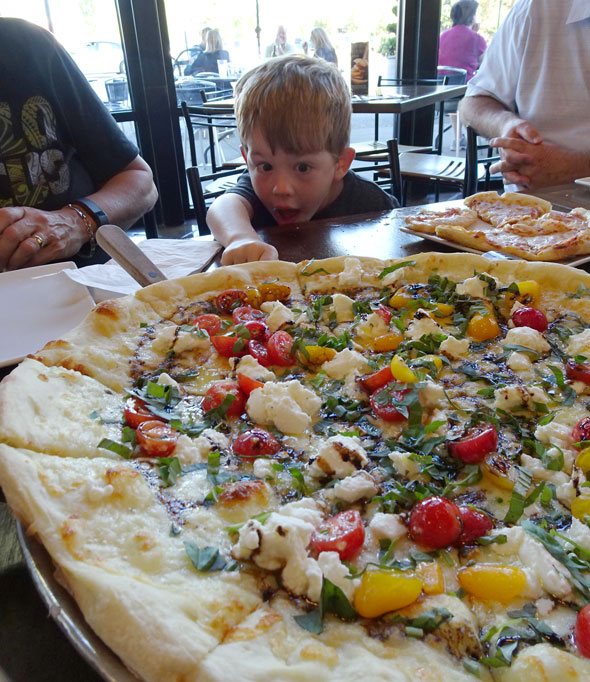 We ordered a large Fresca pizza - Pizzicato's special pizza for August. The pie includes heirloom tomatoes, fresh mozzarella, basil and a balsamic drizzle, and we had a coupon for $5 off. There was some-sort of mix-up in the kitchen and they told us they accidentally made an extra-large, but would only charge us for a large. Ok... whatever... except they brought us a pizza large enough to feed Cleveland. It was a Buick. Leo was in awe.

Leo had the kid's plain cheese pizza. He shared it with Cole. Cole had one bite.

It was a big day!