Santa Rosa, California: Our little “vacation-within-a-vacation” slow road home is not turning out to be as blissful as we had hoped. Beginning with the terrible driving experience of yesterday – now we are going to have a week of rain. Wah! (Note to self: don’t complain about rain in California, you idiot… well, unless there is a flood… then, you can complain.)

Since today was supposed to be only cloudy (not pouring buckets), we decided to take a drive over to Bodega Bay on the nearby coast. We have been to Bodega Bay many times. Dave’s grandmother was raised in Santa Rosa, but lived her married life in Merced. After her husband died, she moved back to Santa Rosa, into a nice home in a retirement community on a golf course. She lived there until she died, in her 90s. We would bring Lisa (just a very small child then) to visit, and grandma always wanted to go on a drive (with Dave driving, to “give her Lincoln some exercise”) to Bodega Bay for lunch. (Seriously, the woman didn’t put 1000 miles on her car in a year.)

It’s a beautiful drive and we have so many fond memories of grandma every time we make the trek. The hills were so green, flowers were blooming like crazy, and there were hundreds of happy cows producing hundreds of gallons of happy milk. 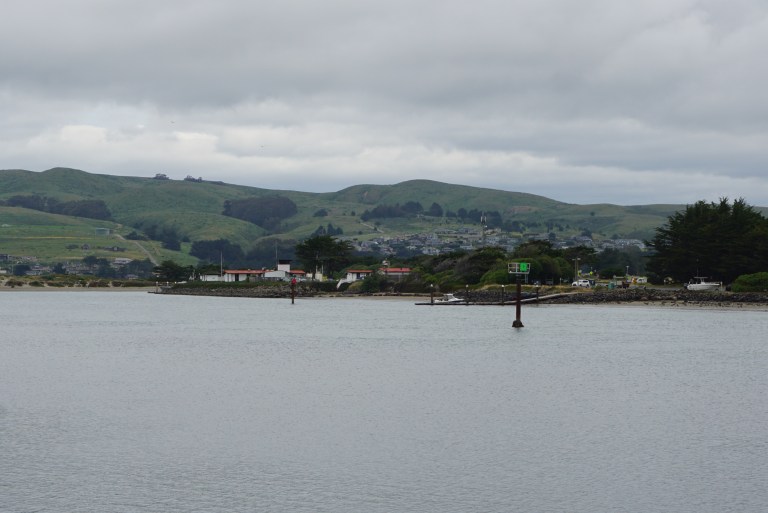 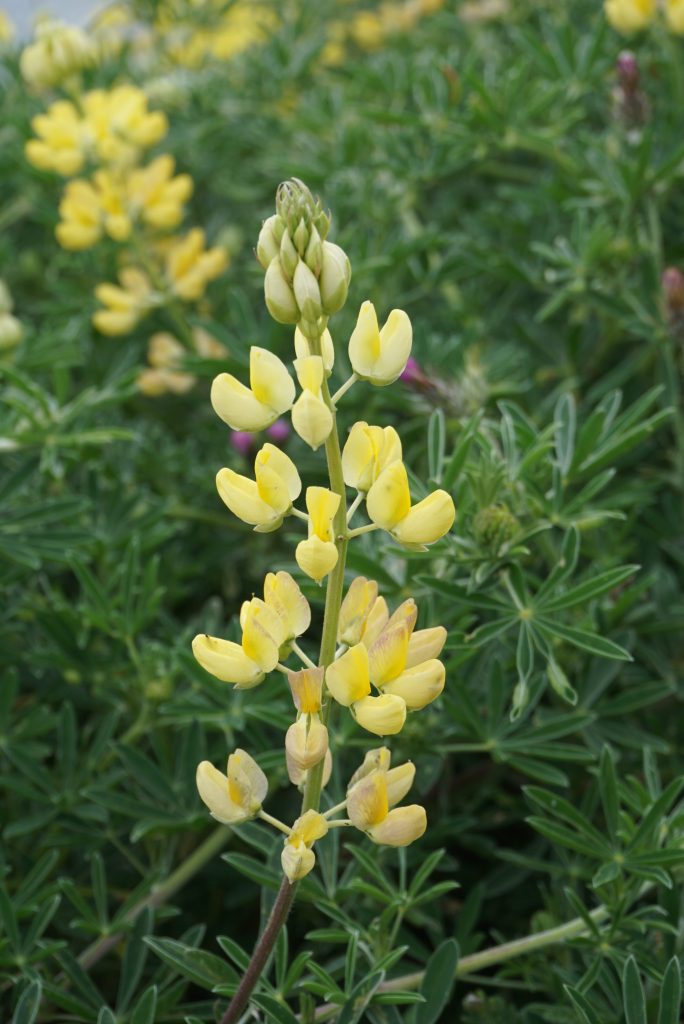 Lupine along the shore of Bodega Bay, California.

Bodega Bay is famous as the setting of Alfred Hitchcock’s The Birds 1963 film, starring Tippi Hedren and Rod Taylor (no relation)… so I guess I’d better post a photo of birds? 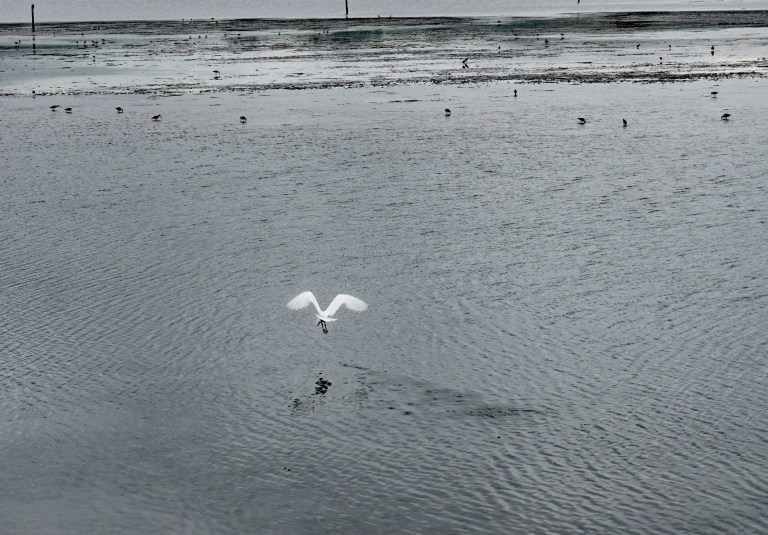 Today we had lunch at a different restaurant than Grandma favored (30 years ago… it’s faded quite a bit), but opted for a very casual fish & chip joint that also sells fresh fish, and is, according a sign on the wall, a “bummer free zone” – Fishetarian. 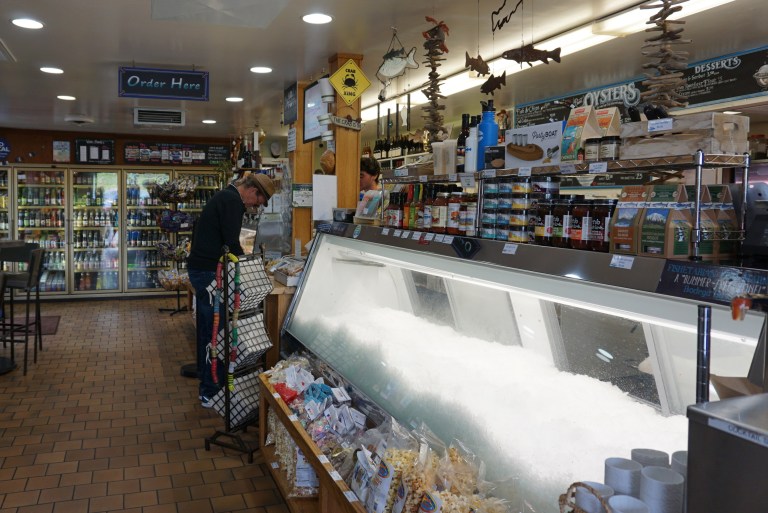 Pay at the counter, collect when ready, find a table. I said it was casual.

There were no fish yet for sale in the cold case, but they had fish and chips (what we were looking for) on the menu, and a crab & corn chowder that sounded delicious. The soup was also gluten and dairy free. We found space at a picnic table outside on the patio for lunch. It was barely 60° outside, but with no wind (and sweaters), we were fine. 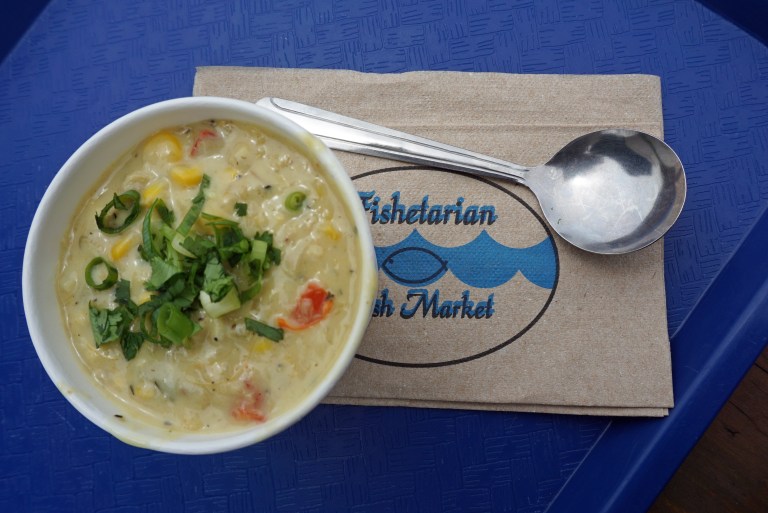 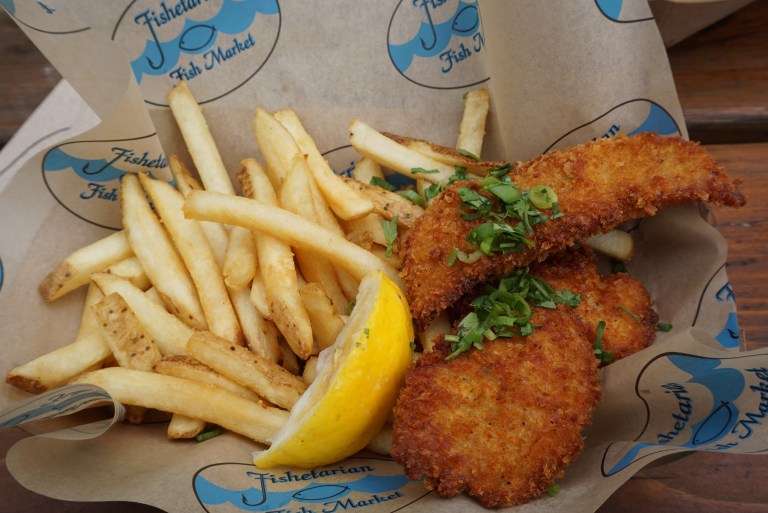 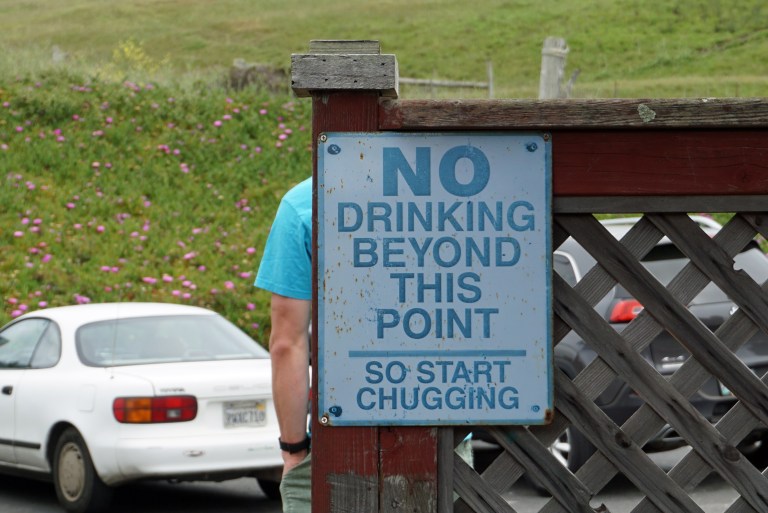 Fishetarian had many great signs posted, including this one above,
and the ever-popular “Hippies Enter through Back Door”

After lunch, we drove out to several campgrounds along the bay, scouting for future trips. We are going to have to downsize our motorhome if we want to spend any time in Bodega Bay.

Returning to Santa Rosa, we stopped to visit the Luther Burbank house/garden in Sebastopol. Luther Burbank (1849-1926) was a horticulturalist born in Massachusetts. He moved to Santa Rosa in 1877 and began experimenting with cross-breeding agricultural plants in order to improve food production. (Grandma claimed to have met Burbank when she was young and he was old.) Burbank bought 18 acres in Sebastopol in 1885, and experimented in earnest over the next 40 years. In his lifetime, Burbank introduced over 800 new varieties of fruits, flowers, vegetables, nuts and grains. He is responsible for the russet potato, the plumcot, and the Santa Rosa plum. He is super-famous all over the world, has many schools, gardens, etc., named after him, and was even painted by Frida Kahlo. 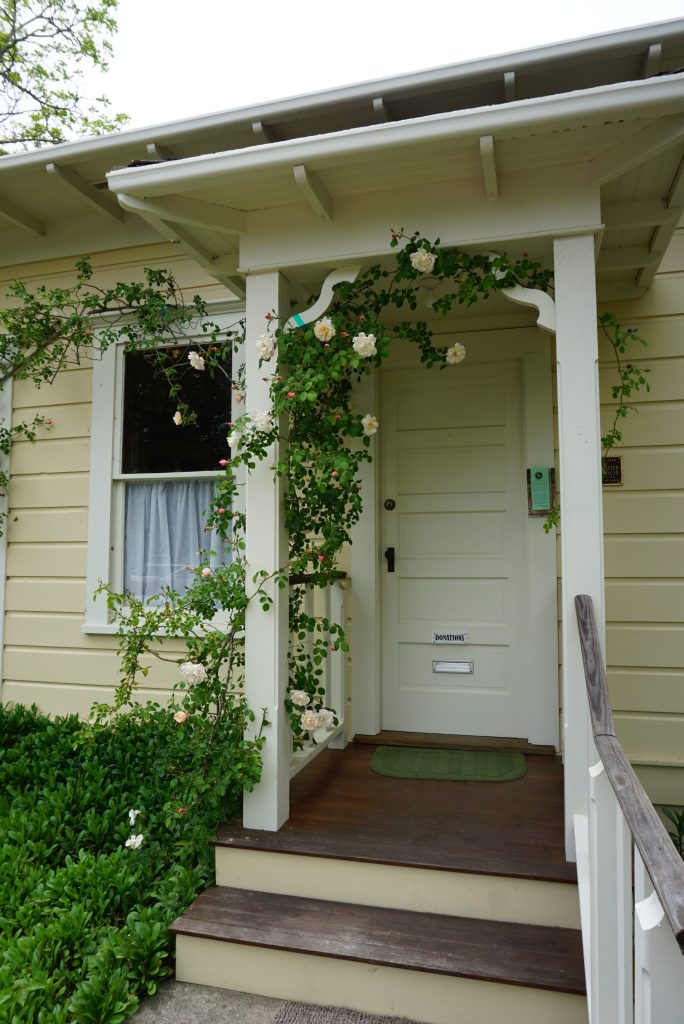 Luther Burbank’s house in Sebastopol. It was destroyed in the 1906 earthquake, and restored. 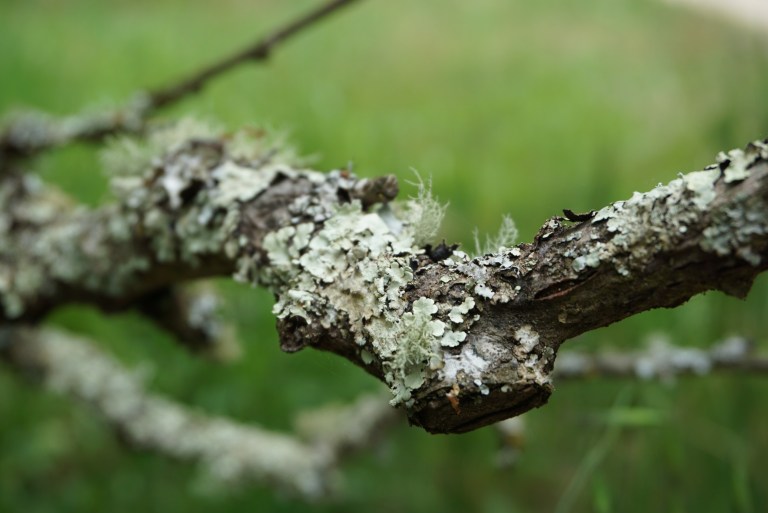 This tree had 25 apple varieties grafted onto the trunk 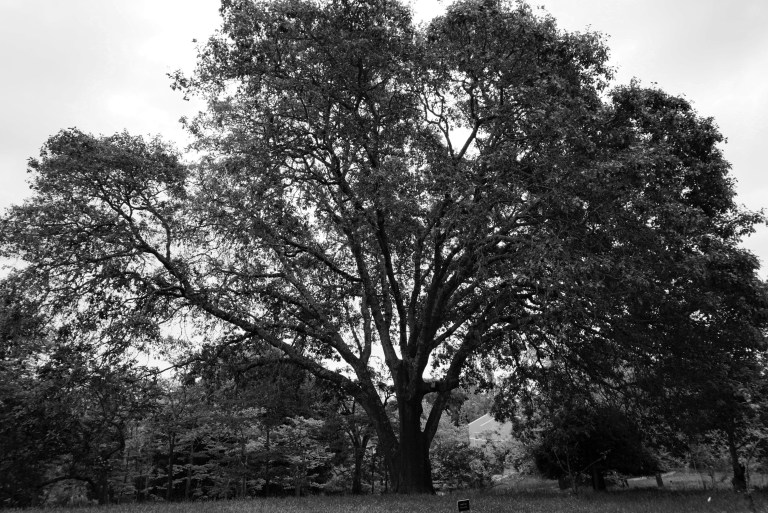 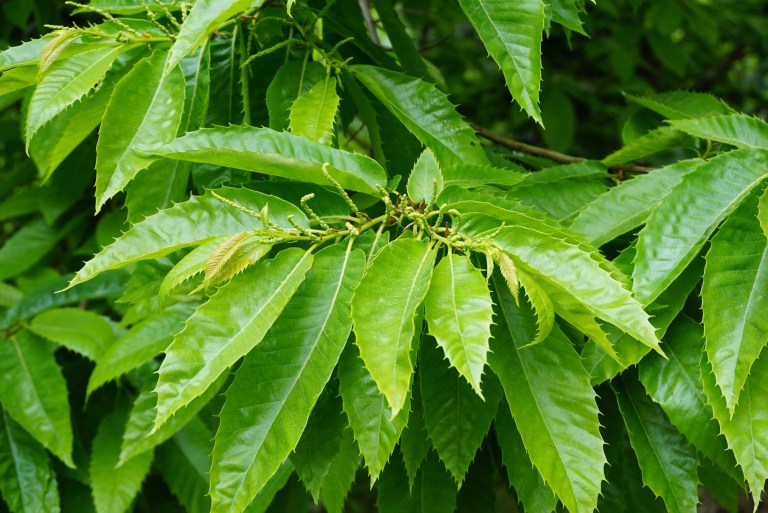 We stopped in the town of Sebastopol to see The Barlow Shops – and fun assortment of “warehouse” restaurants, shops and entertainment venues. Sadly, The Barlow Shops were devastated by a flood in February 2019 and only a few of the stores have reopened. 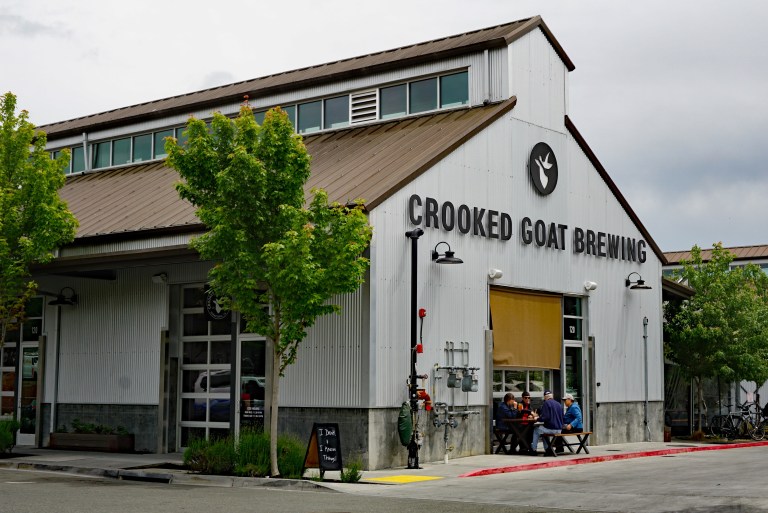 Of course, we had to help a re-building business, Two Dog Night, covered in five feet of water merely months ago. Farm to Cone – too cute!

After walking around in Sebastopol for a while, we returned to our campsite to rest until our late dinner reservations at La Gare in Santa Rosa. There really isn’t much to say about our dining choice this evening. While our food was decent, I just get too upset when we make an effort to dress-up for a meal in a “fine dining” establishment, while other patrons are wearing shorts and tee shirts – and OF COURSE – baseball hats. I really need to get-over this, as everyone is so casual these days. But I can’t. I also could not get-over our waiter, as he removed the used/dirty knife from my appetizer plate and placed it on the tablecloth. Oh. No. Seriously?

Again, Dear Reader: I ask your opinion. Should I just get-over my dress-code phobia? Please reply below.

Until my next update, I remain, your well-dressed/well-fed correspondent.