I wanted to title this blog post "Vegan Burritos"... wouldn't that be just the most exciting thing you have ever read? Vegan Burritos! Yummers! How about Black Bean & Corn Burritos? Ah, much better. We have been eating a little too many latkes and other sweet treats last week (not to mention the chocolates DT gave me for Hanukkah). Time to scale it down a bit and eat a healthy, low-fat, meat-free meal.

But, before I delve into this Mexican-inspired dish, let me share a joke I received this morning from Brother Billy. It is hilarious. (If you don't get the humor, just read the last line out-loud.)

It was Hanukkah and the tiny village was in fear of not having any latkes because they had run out of flour. Rudi, the Rabbi was called upon to help solve the problem. Rudi said, "Don't worry. You can substitute matzo meal for the flour and the latkes will be just as delicious!" One woman looks to her husband and says, "Do you think it'll work?" "Of course! As everybody knows...Rudolph, the Rab, knows grain, dear!"

Okay. Back to our regularly-scheduled program. 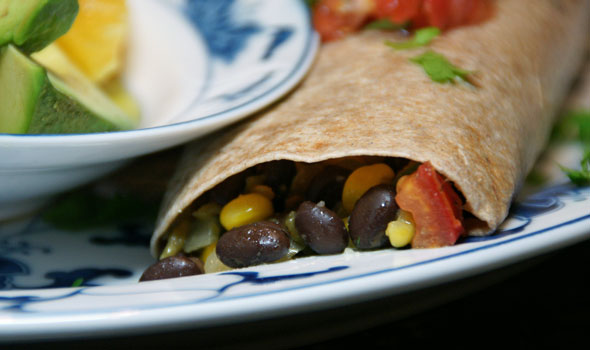 This was a knife and fork burrito - not a hand-held burrito - because there was no cheese to bind all the ingredients together. Cheese was not missed. I served the burrito with a salad of sliced avocado, orange segments tossed in a little extra virgin olive oil and a pinch of sea salt.

An icy margarita (made with those lovely organic key limes from Brother Steve & Sister Gina's farm) was an additional garnish.

The above "recipe" made enough filling for four burritos - so we have plenty for a nice lunch tomorrow.

Until my next update, I remain, your vegan correspondent.
« The Last Night Bouchons au Thon »