Last year, we noticed a huge construction project starting just on the edge of town - right before you leave civilization and continue five more miles to our house. As the weeks went by and we would occasionally travel by the building site when we were in town, I became amazed at the sheer size of the building. I decided it was going to be one of those mega-jumbo multi-screen movie theaters.

Wrong. A few months later a sign declared the monstrosity was going to be Big Al's. They opened a few weeks ago. 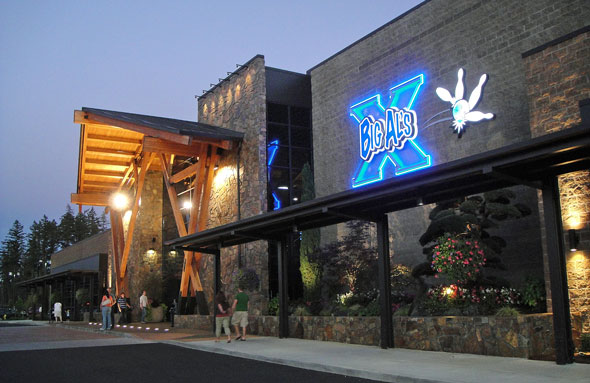 Doesn't it look like a Cabela's with a bowling alley?

Big Al's is the second in a now-chain of "family entertainment centers". 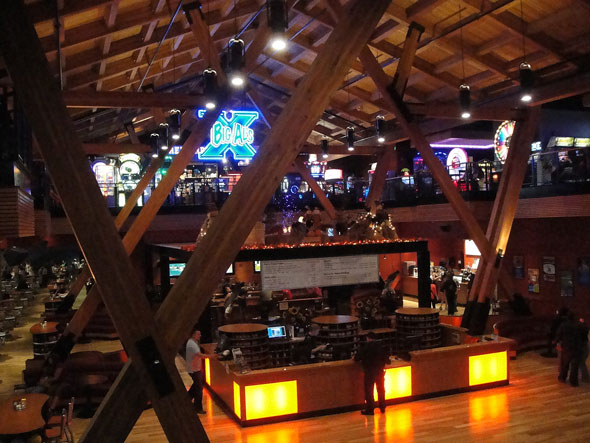 This is the lobby of Big Al's. Two floors of entertainment. The center desk is where customers can rent bowling shoes and choose their weapons. 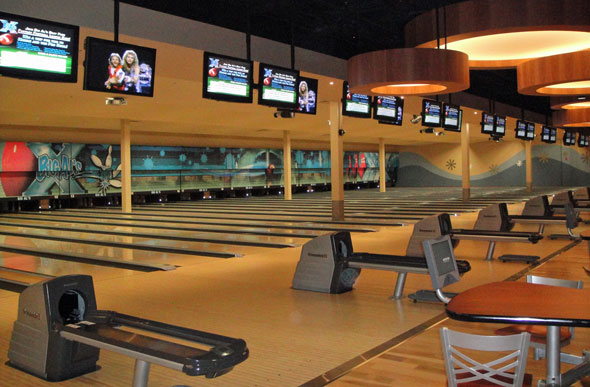 Big Al offers over 60 lanes of bowling. This is the "normal" bowling alley - they also have a dark bowling alley with black lights, strobes and hot music. The seizure-prone should avoid this space-age-bowling area - too much stimulation. 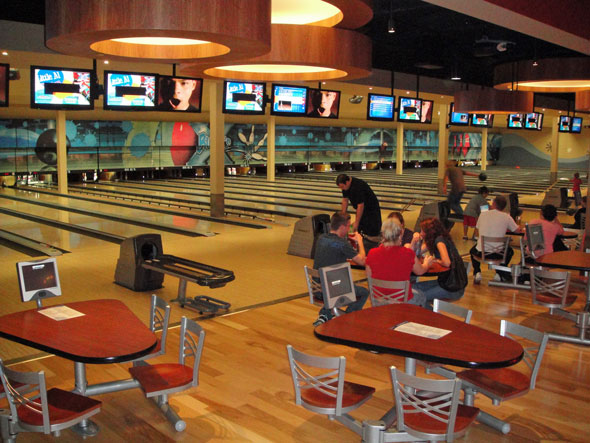 Patrons were actually dining at the bowling lanes. Full plates of food and glasses of wine! On the lower floor at Big Al's is a massive sports bar, an ice cream parlor, pizza, several small bars and other food outlets. The entire facility is smoke-free. Plenty of free parking. Big Al has 200 employees! 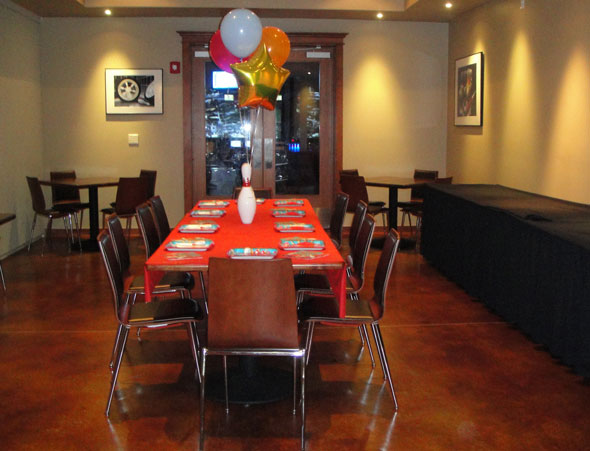 If you want to have a private party - you can have it at Big Al's! 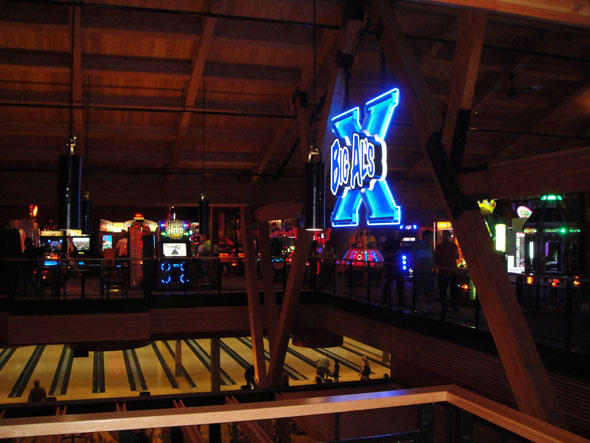 Almost all of the upper floor is devoted to video games of every sort. I am not the right person to describe the video games, because - except for one memorable Whack-a-Mole experiment in the early 1980's - I have never really paid much attention to this part of our culture. It was also quite dizzying and noisy and there were really a lot of people having a very grand time. Adults and kids. Looked like a popular date-night spot too. 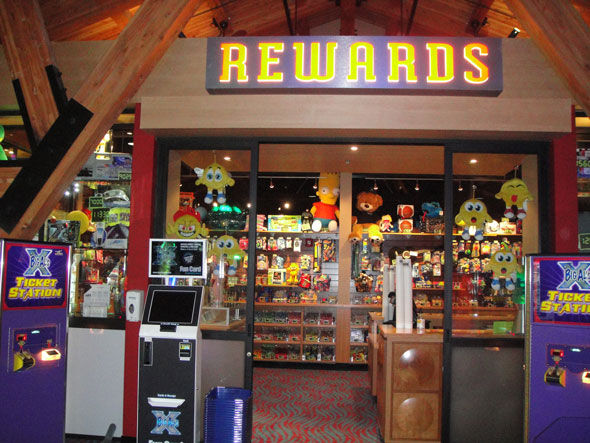 Apparently, if you score enough points on the arcade games, you can earn a bunch of junk cool prizes! (TRUTH: The Lovely Lisa, circa age 7-10, would have loved this place.) 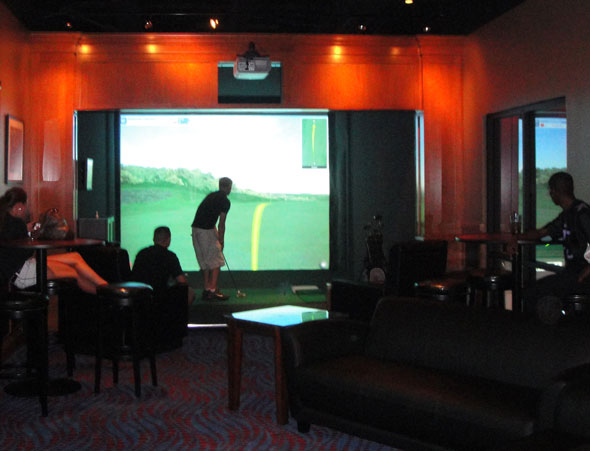 Excuse the quality of this photo, but... also on the upper level of Big Al's are several smaller bars, a bowling ball store, pool tables and this very cool golf simulator. 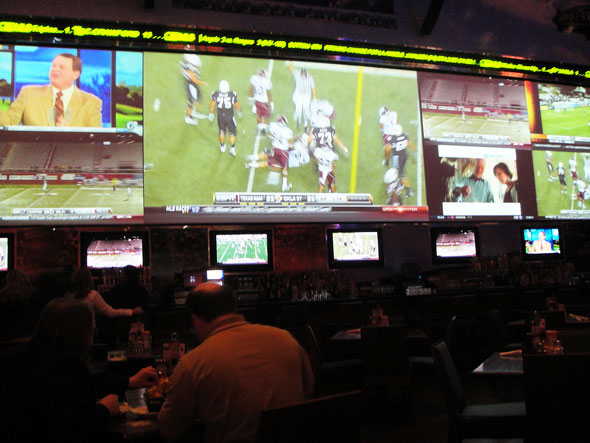 DT and I parked ourselves in the huge Sports Bar on the lower floor. Big Al has a 56-foot-long television that can be divided into as many as 48, or as few as 3 TV screens! On one screen! Fifty six feet wide! Amazing. The menu is very typical of what you would expect at a sports bar - wings, nachos, burgers, sandwiches, salads, etc. We watched the Oklahoma State Cowboys beat Texas A&M with a last-second field goal and enjoyed very decent Buffalo Wings.

We may have had a few beers too.

Until my next update, I remain, your "we'll be back" correspondent.
« Don’t send cash Return of the Roomies »