Track Town, USA:  We drove our RV to Eugene this afternoon for the Oregon v Cal football game. 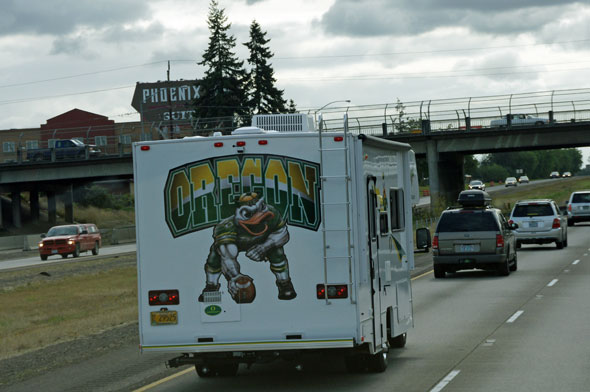 See? We are not the only nut-jobs painting their RV in Duck U colors.

Yesterday, the weatherman guaranteed dry skies. Over-night, something happened and rain was predicted. We were fairly lucky and only had a few sprinkles at our tailgate before the game. 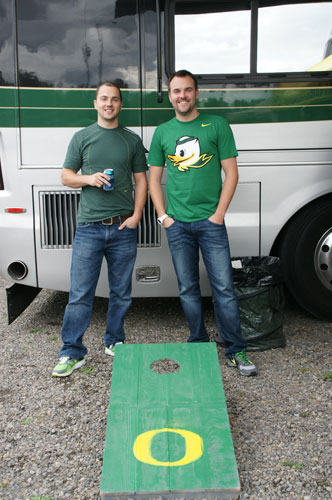 The kids played a bean-bag-toss game. Laura's Dad made the game hisownself. The kids loved the game and had so much fun. Our group is quite competitive, by the way. 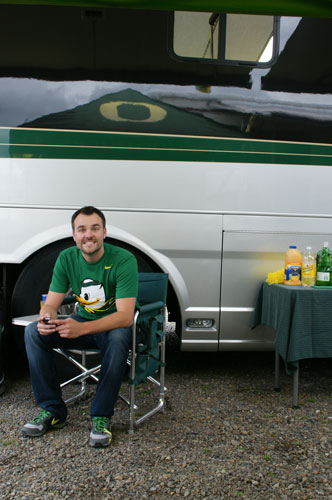 This is the artsy shot-o-the-day - Jake, with the Oregon "O" reflected on the Magna Peregrinus. Notice the old-fashioned Duck on his shirt? The team wore this retro Duck on their uniforms tonight.

As I wrote yesterday, DT invited the local Track & Field World Championship athletes to our tailgate. The athletes were being recognized on the field tonight - between the 1st & 2nd quarters. You all know I love me some runners and could not have been happier than to host these athletes today. Woody and Kathy manned the grill and served up 48 organic beef burgers to the masses.

There was enough gold, silver and bronze at our tailgate tonight to open a bank. 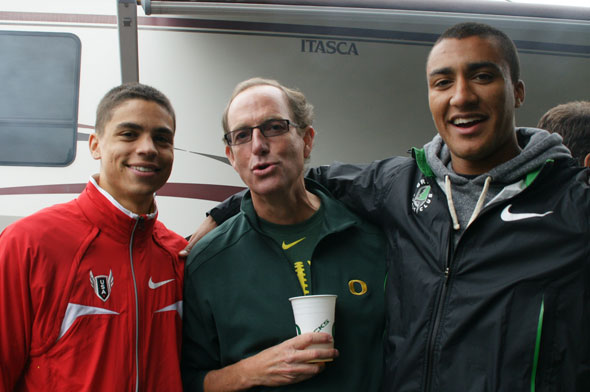 Side note on Ashton: do you remember a few months ago when I told him we would not be in Korea to watch his competition because The Lovely Lisa was due with our first grandson the same week? This afternoon, Ashton asked me if Lisa had the baby, etc., and I told him she had a baby boy and had named him Ashton. The look on Ashton's face - for about one millionth of a second - was priceless! Always fun to mess with the WGA's head.

I am here to tell you, Mr. Eaton will win the gold medal in London next summer. 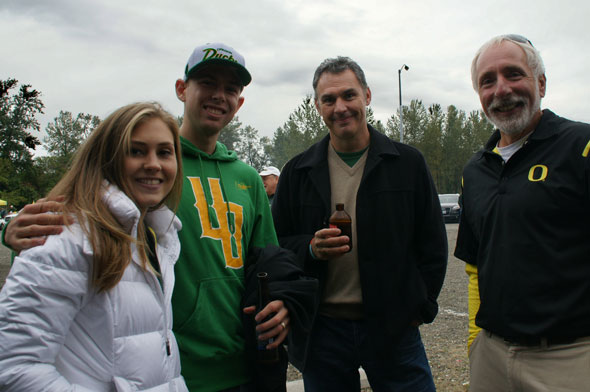 Galen Rupp and his wife, with his coaches 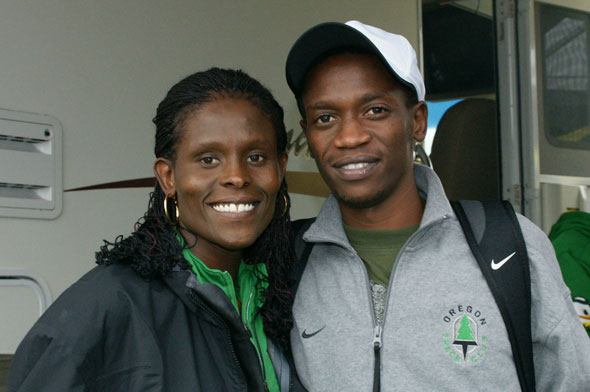 Sally Kipyego runs for Kenya, but trains in Eugene with the Oregon Track Club. Sally attended our tailgate with her husband, Kevin Chelimo. Ms Kipyego won the silver medal in Korea in the 10000m. 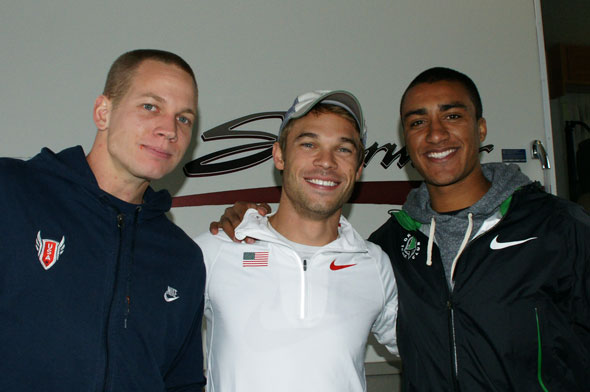 Ready for a little gold? Jesse Williams, who jumped for USC, won the gold medal in the high jump at the World Track & Field Championships. Olympian Nick Symmonds finished 5th in the 800m final in Korea. Today they were just normal guys and ate hamburgers and drank beer out of a can. 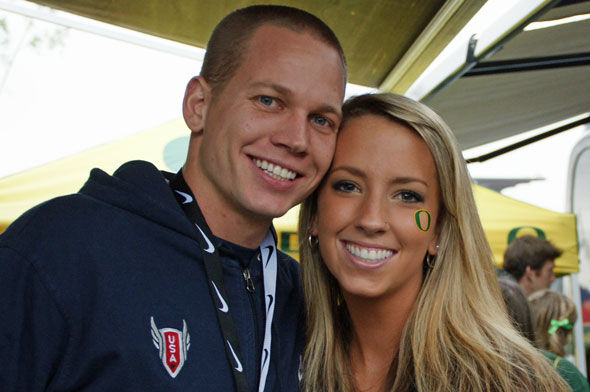 Jesse is dating a very lovely young lady. Her name is Lisa. Can't go wrong there. 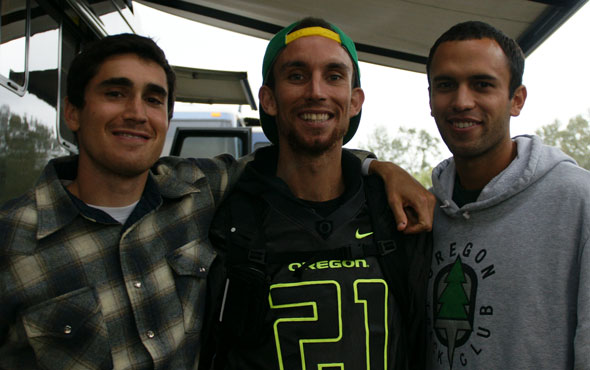 Could this tailgate get any better?

Only if Jimmy Buffett showed up... and I happen to know for a fact Mr. Buffett is in France.

He sent me a postcard. 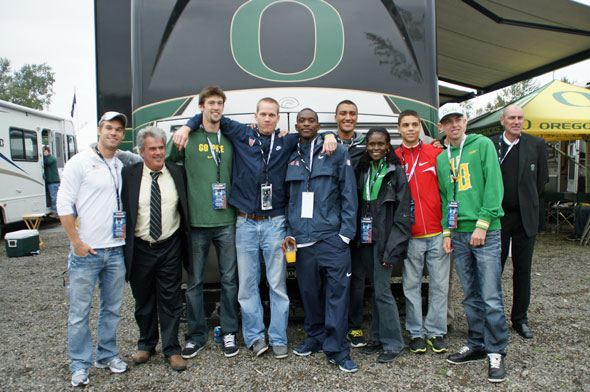 Michael Berry (center, in blue track suit) also has a gold medal (relay), so that brings the total hardware at our tailgate to two gold medals, two silver medals and one bronze. 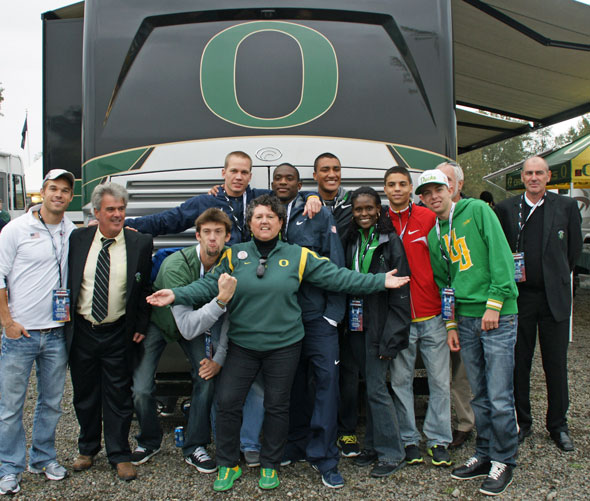 It's my bus, so I jumped into the photo. Let's face it - no one is going to mistake me for a gold medal winner. And I am not short and fat - everyone else is really tall and really skinny.

I understand there was some sort of a sporting event at Autzen Stadium this afternoon. Something about a football game.

The Ducks won. All I know is that LaMichael James, who is also on the University of Oregon track team, injured his arm. Football is too dangerous.

Until my next update, I remain, your elated correspondent.
« Cookies Ten Ten »