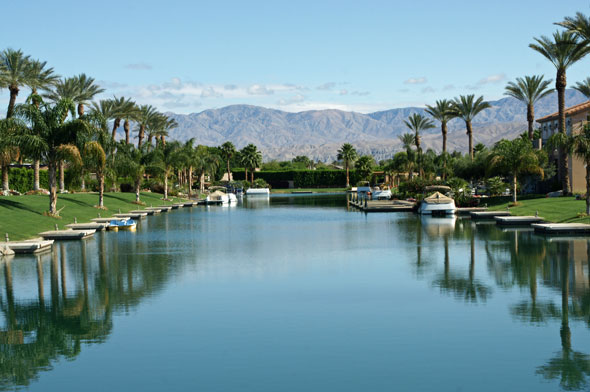 Our day started early with massive intentions of getting out of town before 10 o'clock. But the phone kept ringing, emails kept arriving, people kept stopping by and, well, it was nearly noon before we left town.

Today was Dave's birthday! I certainly wouldn't want to spend my birthday on the road, but DT (Mr. Don't-Fuss-Over-Me) was fine with the plan. Fine with having his birthday dinner at the pub at the Bakersfield RV Resort. (I offered to cook. He said no. I offered grilled lamb chops. He said no. I said I would bake his favorite cheesecake. He said no. I baked the cheesecake anyway.) Technically, we celebrated his birthday last night at Castelli's and the date will be celebrated again this weekend with his family. 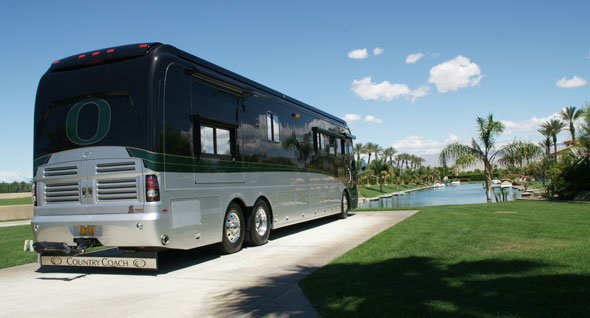 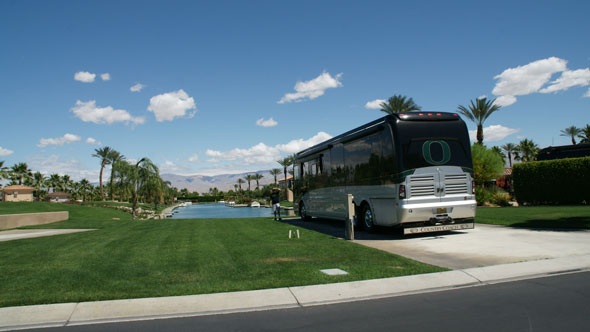 Why are we leaving this perfect place? 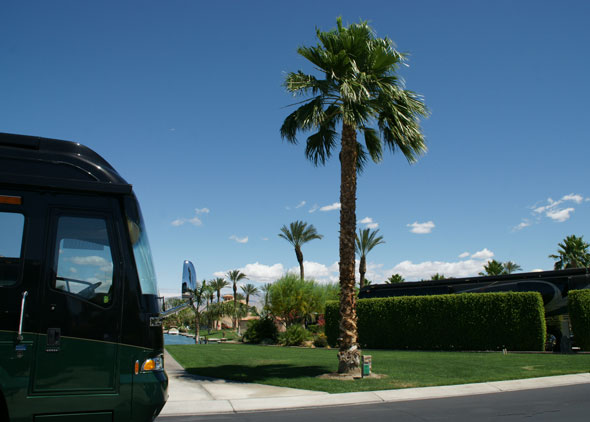 Note this view. Tomorrow a construction crew will begin building a casita and covered pavilion. 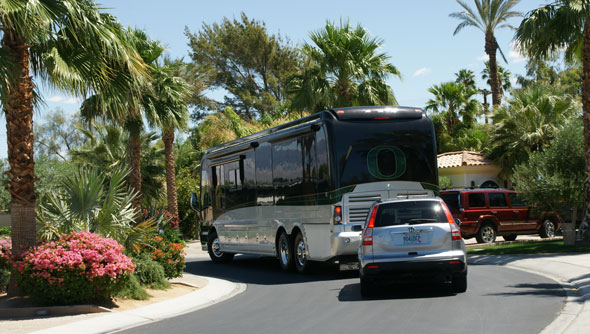 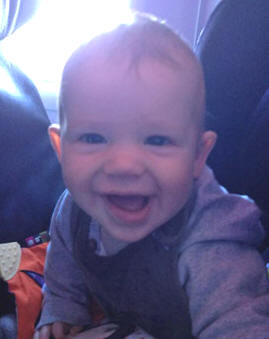 It was a great time to get out of town. Two weekends of the Coachella Music Festival aren't enough for this community. Tomorrow begins another three-day event - Stagecoach, a country music hoe-down extravaganza. Motorhomes were streaming into this RV park like it was a holiday weekend.... which I suppose, Stagecoach truly is for country music fans.

The entire family is traveling today. Lisa, Lenny and Baby Leo are in Florida this weekend for a wedding. Through modern technology, I was able to text with Lisa on-board their flight. The plane had wifi! Lisa even sent photos of the boy - at 30,000 feet. He's cute, but not so sure I would be thrilled to sit next to an 8 month old for six hours - unless the baby was MY grandchild, of course!

It had been such a long time since I had put the Honda through the towing procedure, it took a few moments of deep brain recall to remember the steps. Amazingly enough, after we were on the freeway, nothing fell down, not one cabinet door flew open. Nothing clanked. However, we did have some excitement. We were only a few miles down I-10 when one of the bay doors (just under the driver seat) popped-open! This is about the third time this has happened to us. Never fun to pull-over on the interstate to close a bay door.

Next stop was for fuel. Because we were going to be parked for such a long time, DT left our tank with just a bit of diesel after our trip to Borrego Springs and Yuma in February. The truck stop outside of Palm Springs was chock-a-block with RV's heading to the Stagecoach Music Festival. We had to wait in line for quite a while. Then, the machine would only let us pump $150 worth of diesel before it shut off. The pump allowed to DT use his debit card twice and then would no longer accept the card. He simply used my card (same account and same PIN) to put 107 gallons - $450 - in the tank. This did not quite fill the tank, but enough was enough. While he was fueling, I knit a scarf and worked the NY Times puzzle reheated that gorgeous veal cutlet from my dinner last night and we had lunch before continuing our trip.

As we drove north, the sky became very dark and I said to DT that it was a good idea we found the wipers because it looked like rain. Rain? He then told me it poured rain for hours last night in the RV resort. What? I slept through a terrible rain storm? I am blaming it on the red wine he chose for dinner. We were awake before seven o'clock this morning and there was no evidence of overnight rain. 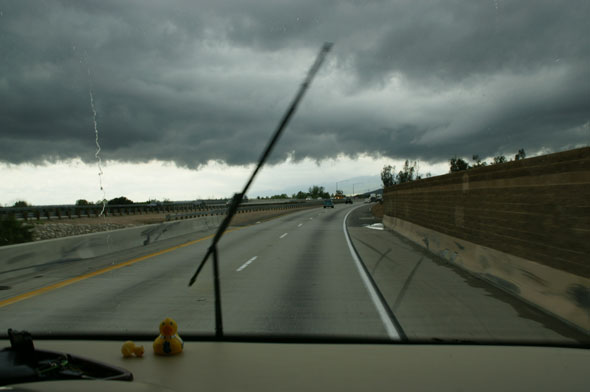 Good thing we had new (teeny) wipers as we traveled through Banning! Between Banning and Four Corners (where 395 & Hwy 58 cross) the rain hit hard and the wind was so strong - and was hitting our RV at such an unusual angle - the metal cover holding the awnings over our slide-rooms popped-open. Three times. Every time it opened, the noise was deafening. Like a 5-second tornado blowing through our motorhome. We had heard this noise before, and pulled-over at Four Corners to inspect the awning cover. All looked well. Whew.

Sadly, we saw two motorhomes on the side of the road today, trying to rewind patio awnings that had unfurled in the wind. Been there. Done that. Once - in our P.O.S. Holiday Rambler Endeavor. We were lucky today, with only our metal flaps popping up a few times. Travel safe, people.

Taking a left at Four Corners, the wind was at a better angle and we were scared out of our chairs only one more time as we crossed over the 4,500 Tehachapi Pass into the San Joaquin Valley and Bakersfield. 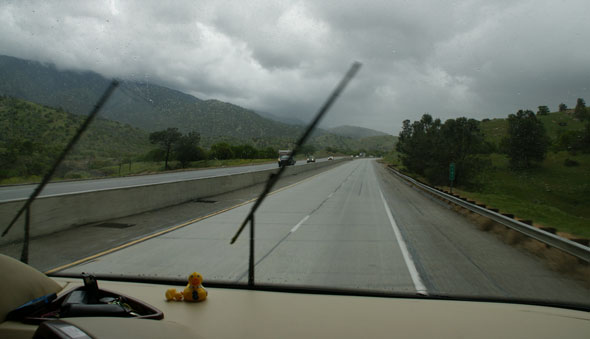 And one more rain storm! 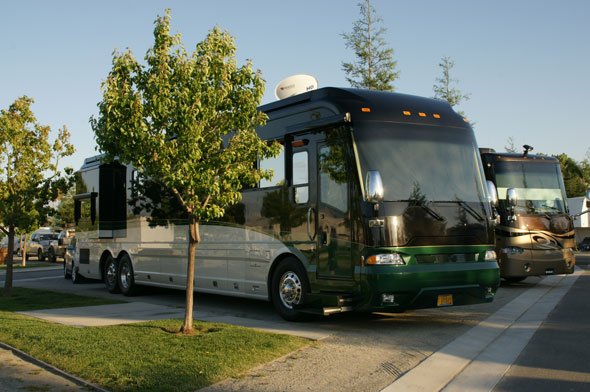 We pulled into the Bakersfield RV Resort just before 6p. The Birthday Boy was pretty exhausted. He was happy to relax for a bit (with only two Olympic Trials phone calls) before we went to dinner at the fun little restaurant in the RV resort. We both had healthy salads while watching the NFL Draft on the big screens in the bar. Did you know Bakersfield, California is the most polluted city in America? The "awards" were announced yesterday... followed closely by several other cities in the San Joaquin Valley. Los Angeles (where Little Leo's lungs are growing) is listed at #4.

Portland, Oregon was not listed.

Speaking of Portland... have you seen this incredible time-lapse video?

Is there any reason you are not loading-up your RV right now and pointing it towards Oregon?

My Driver refused even the smallest little slice of his birthday cheesecake. He prefers to share it with his brothers tomorrow. Until my next update, I remain, your Bakersfield correspondent.

SLOGGER REPORT:  My rest/recovery period is over. Time to test the shins in the morning. Dang.