Los Angeles, California: Oh, Dear Patient Reader! I do apologize. I should have at least checked-in over the past week (I did post one Instagram photo). Truth is, I've been sick. Gobsmacked. It came out of nowhere the day we returned from the Oregon coast, started with a fever, stopped-me-in-my-tracks with aches, and finally settled in my chest. I have a course of antibiotics and, after a week, am no longer contagious. Still feel like drek, but since there is no longer fear of spreading this bug to my peeps in SoCal, we hopped on a commuter jet to celebrate the birthdays of the Cutest Grandchildren in the Whole Entire World who are not yours. 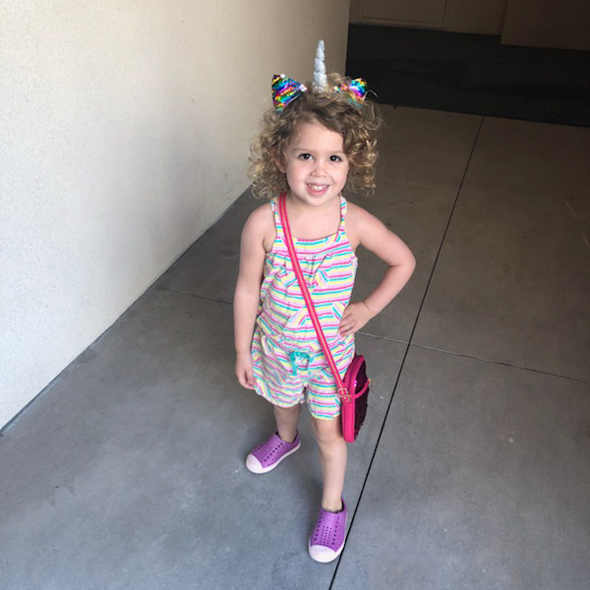 This unicorn is nearly 4!

Since Leo (August 2; he turned 7 yesterday) and Lucy (August 19; she will be 4) celebrate birthdays just a few weeks apart, Lisa finally caved and will give them a joint birthday party this year, instead of the usual two big bashes... which always causes Lisa to be too exhausted (and broke) to enjoy her own birthday on August 22. Lenny's parents have flown in as well and will take the birthday boy and girl to Legoland, so Lisa can prep for the festivities in peace and secrecy. (Actually, remembering our trip to Legoland, maybe the party-preppers have the easier detail?)

So here we are, again in Los Angeles, for the most wonderful of reasons... though, dang, if traffic wasn't just the absolute worst-it's-ever-been... taking us nearly TWO hours to reach PDX and we boarded the plane five seconds before the door was latched. You hear about the terrible traffic in Los Angeles, but I guarantee it so much worse in Portland (and Seattle). Guarantee.

But I have so much to catch-up on here on this little blog. Not sure where to start. Let's back-up a few weeks. Just after returning from the cruise to Alaska, Lisa and Leo flew to Japan! Yes, Japan! Their Dear Friends are in Japan all summer, while Kevin is participating in some-sort of sabbatical. Kevin is an ophthalmologist, so I cannot attest to the actual program... but they invited Leo to come join their daughter (one of Leo's besties, Rina) while they were in Japan. What a great opportunity. Lisa and Leo flew over (Lenny had to work, and Lucy... well, Lucy is three... she went to day-camp at her preschool) and spent five days with their friends, and five days on their own exploring Tokyo, Kyoto, and a few other destinations. Lisa said Leo was the perfect travel companion, even with the terrible heat/humidity and jet-lag. He never complained once. One day, while visiting Tokyo DisneySea, they logged nearly nine miles on their feet - Leo was a trooper. Leo, our sushi-connoisseur, was in heaven. We were able to FaceTime with Leo several times and he was SO HAPPY and was absorbing every experience like a sponge. 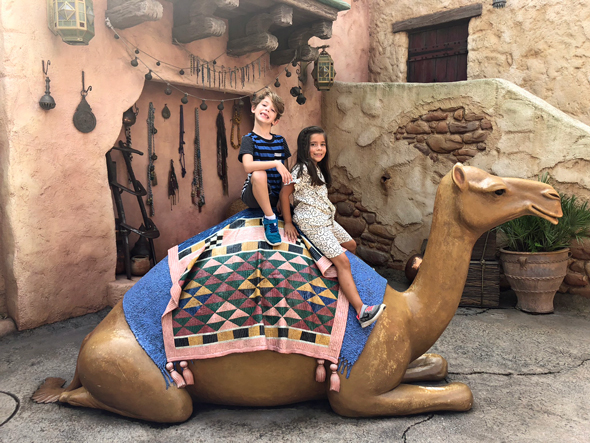 Lisa and Leo saw so many sights and had so much fun. I tell you, that kid is having quite the summer, eh?

The first time Lisa visited Japan, she was three months old. Back in the day (early 1980's), to reach the west coast of the US from The Philippines, where we were living when Lisa was born, we had to fly to Tokyo, spend the night in a hotel, then continue on to San Francisco, then on to Portland, Oregon. It must have taken days. Seems ridiculous to me now. Also, to fly in Business Class, Dave had to wear a suit and tie - and smoking was allowed! (Our Poor Baby!) We would often parlay this overnight stop into two nights, mostly so we could shop... or maybe Dave had business in the Tokyo branch office. We lived in 90-degree-every-day Manila, and were traveling to 50-degree-every-day Portland - in the winter. Lisa needed sweaters, layers, something for her feet. There were no-such items for sale in Manila. The lowest temperature recorded in Manila during our three-year stay was 70 degrees Fahrenheit. So, we stopped in Tokyo to load-up on our way to Oregon. The baby clothes were so nice in Japan, the cotton so soft, the prices so reasonable. Also, Japan had disposable diapers with elasticaround the legs. Nothing so fancy in Manila in 1981.

Throughout her early years, we would travel - to and through - Tokyo many times with Lisa. Remind me to tell you about the time Lisa spent three weeks in Japan as a foreign exchange student through her school in Portland. In THIRD grade. I kid you not.

That kid was born in a suitcase.

And now for a little needlepoint showcase. Projects have been delivered. A pillow for my fly-fishing Brother Rick, stitched in a 50-50 blend of silk and wool. This pillow is 16-inches square. Rick put it in his RV. 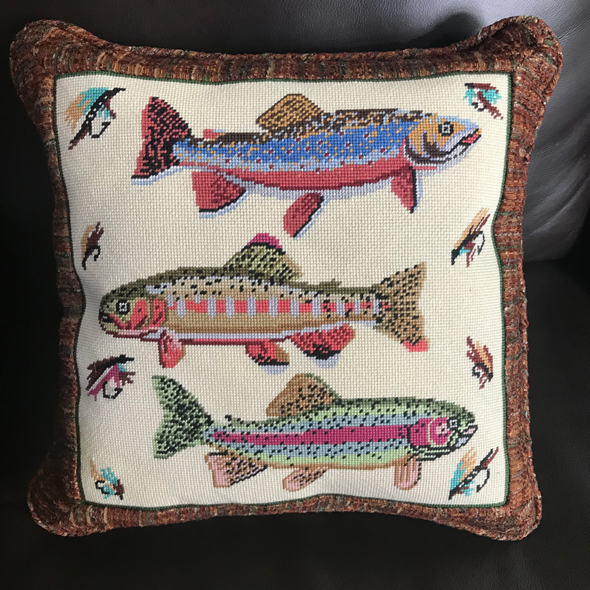 I stitched a little square insert for a black-lacquered box to give to My Sister on the occasion of her recent Zero Birthday: 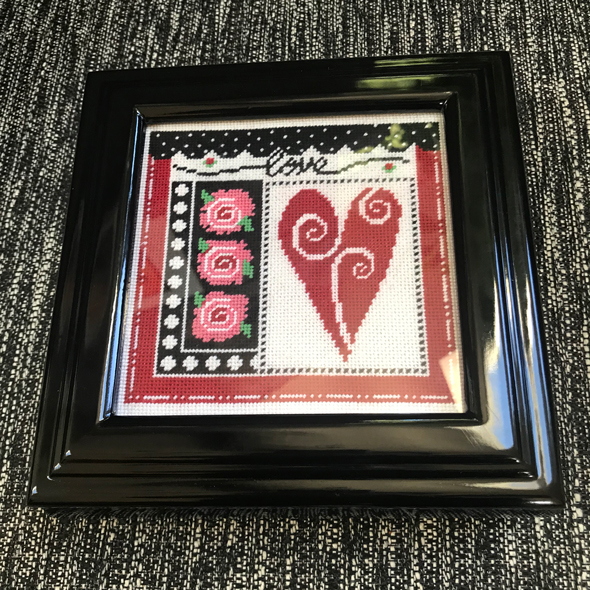 Renee is a minimalist. She wants nothing, so I am sure this box will remain empty.

The last little treasure is for Lucy, on the occasion of her birthday. Lucy is nearly four, so wants EVERYTHING. This box will not excite her this week at all, but maybe when she is older, she will find/receive a few treasures to keep in the box? I was stitching the tutu while on the Alaska cruise. Lucy saw the design, gave it a good gaze, and promptly asked if it was for her. I said she is four. Not slow. 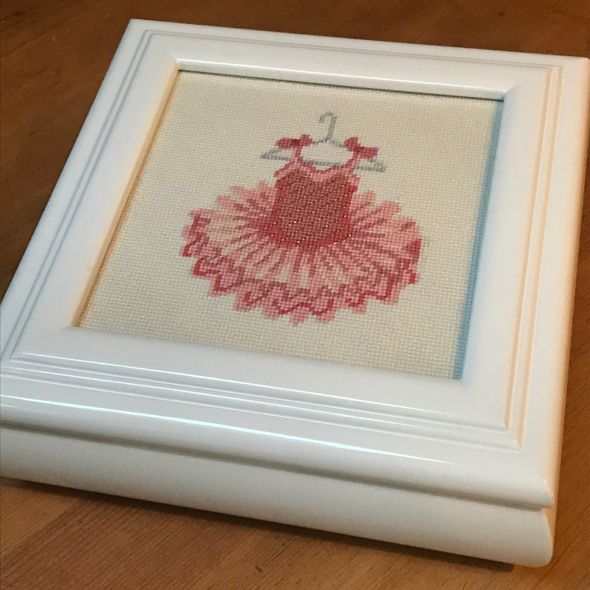 The tutu is placed in the same box as I gave My Sister, only white. The design area in both boxes is 5x5-inches. Both canvases were stitched in silk. Lucy's has a fun metallic silver fiber on the hanger and a bit of gold metallic on the torso of the tutu. Cute! Sparkley!

Until my next update, I remain, your trying-to-feel-better correspondent.