Indio, California: We have ourselves in a bit of a wonderful rut: the kids seem to come out here every year to celebrate New Year's Eve with us. Wow, who wouldn't want it ring-in the new year with their parents??? 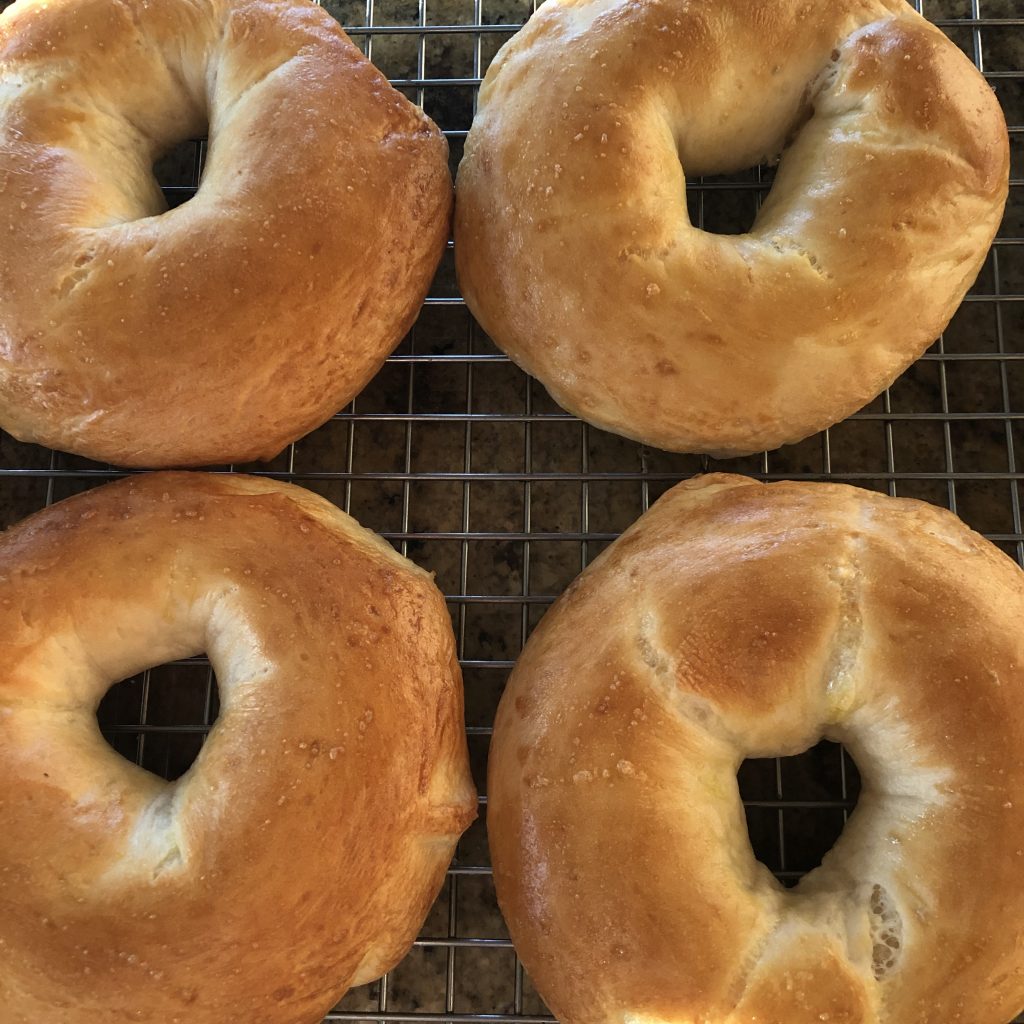 Dave does a little organizing, I do a little food shopping and baking, and we are ready for a fun weekend with Lisa, Lenny, Leo and Lucy.

Dave's high school friend/teammate, Mark, and his wife, Debbie, were in town, so we all went out for sushi Friday night. Let's just say there probably isn't a piece of yellow tail to be found in the Coachella Valley after Leo and Lucy swept through town.

Sunday was polo day (another tradition!) at the Empire Polo Club. We had a reserved table for the brunch and were joined by Los Angeles friends Mike and Kevin - and their daughter, Rina. Though a bit chilly, there wasn't a cloud in the sky and with no wind, it was a most pleasant afternoon. Two matches today. 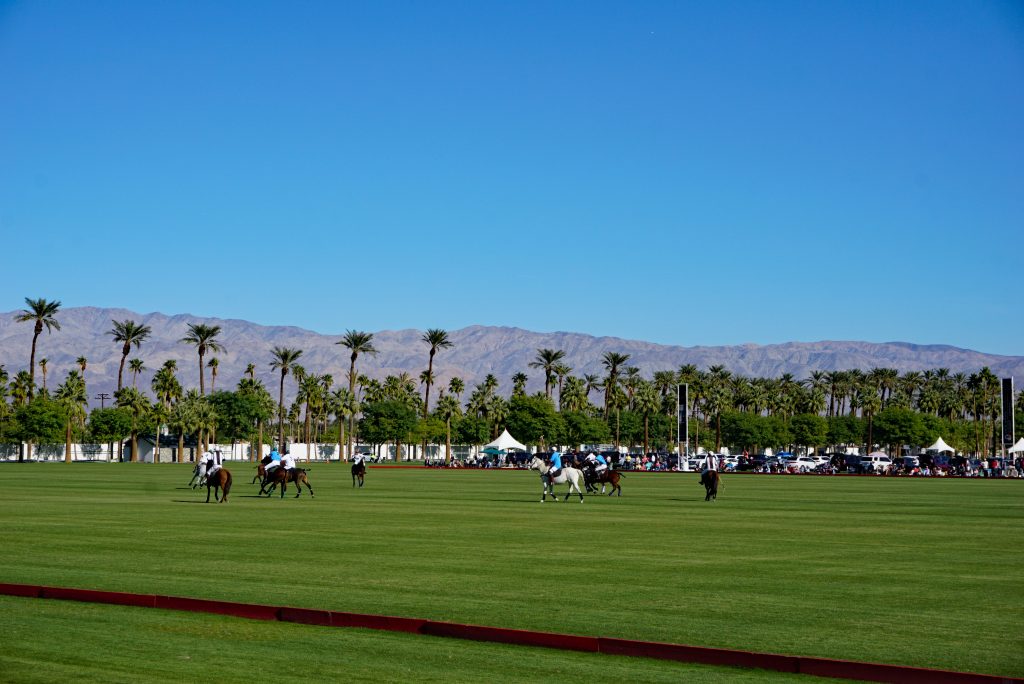 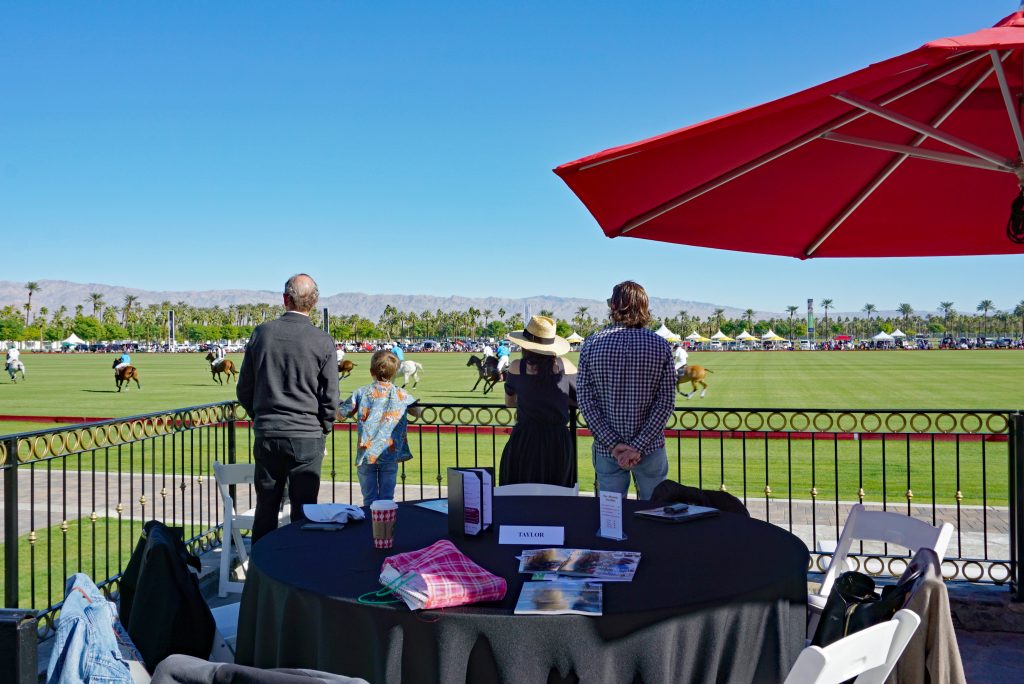 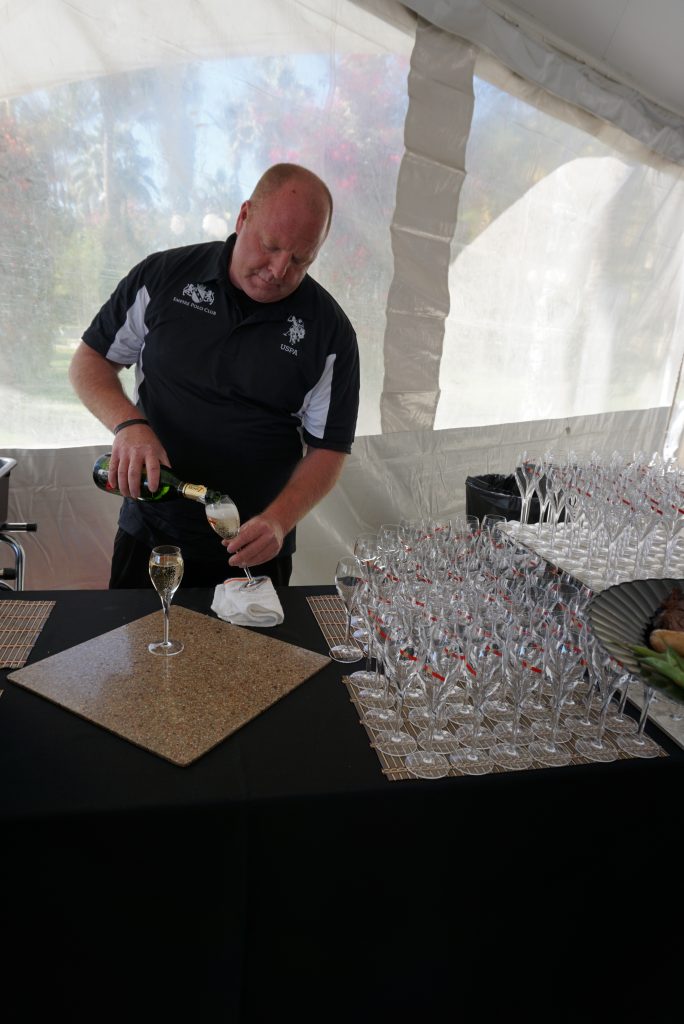 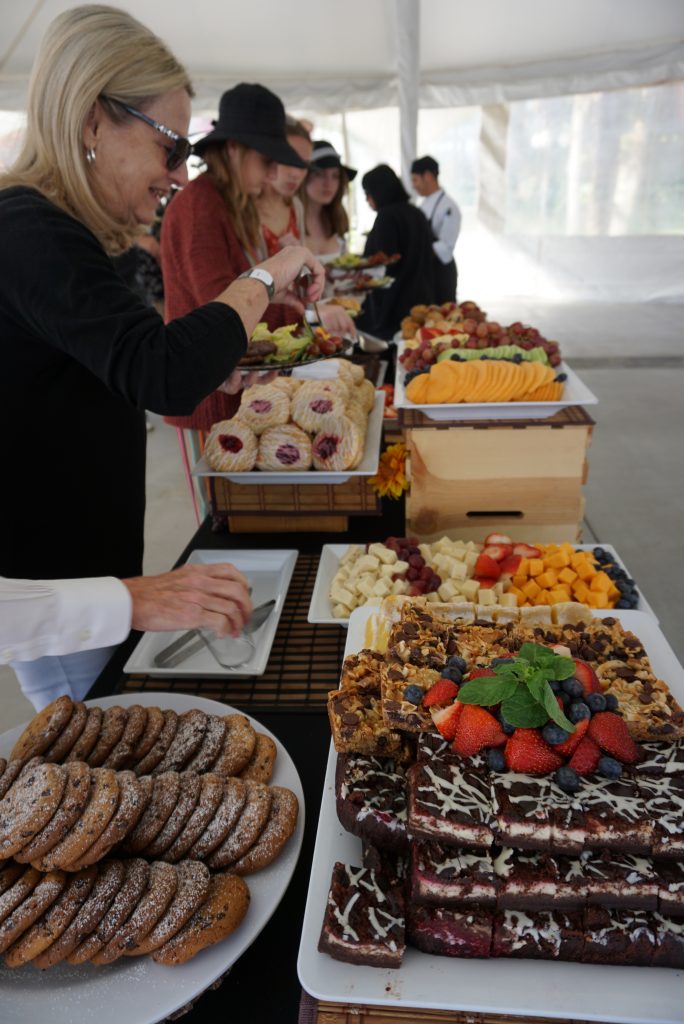 At half-time, and again between matches, spectators are invited to walk onto the field - champagne in hand, naturally - and stomp on the divots made by the horses. It is a long tradition and the grandkids favorite thing to do at polo. 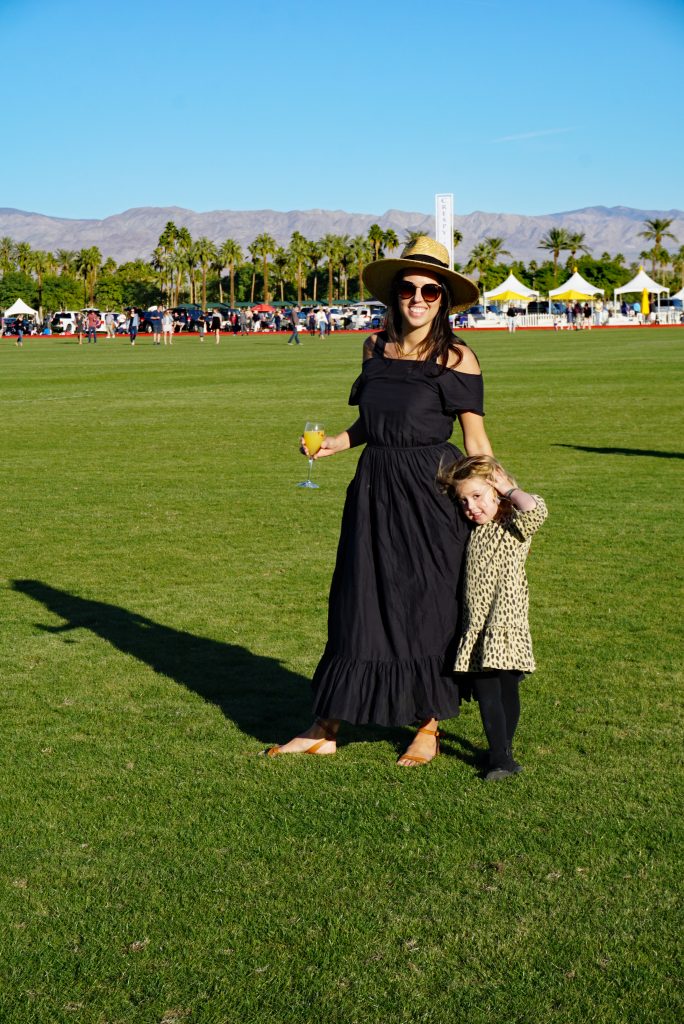 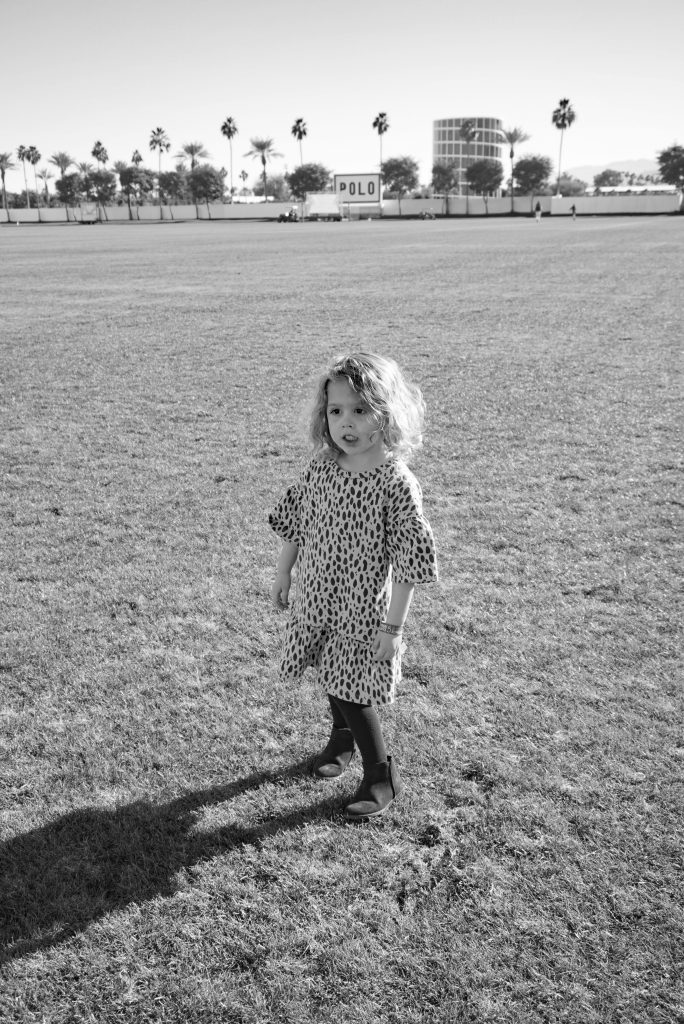 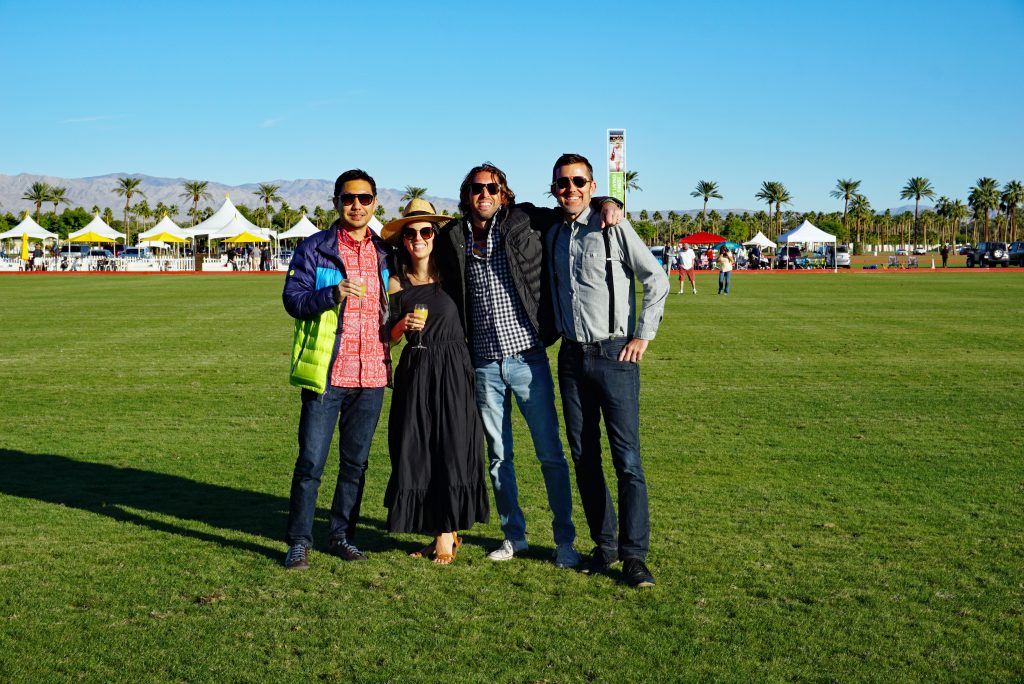 Maybe divot stomping isn't the only field activity. The kids love to let Gramps swing them around. 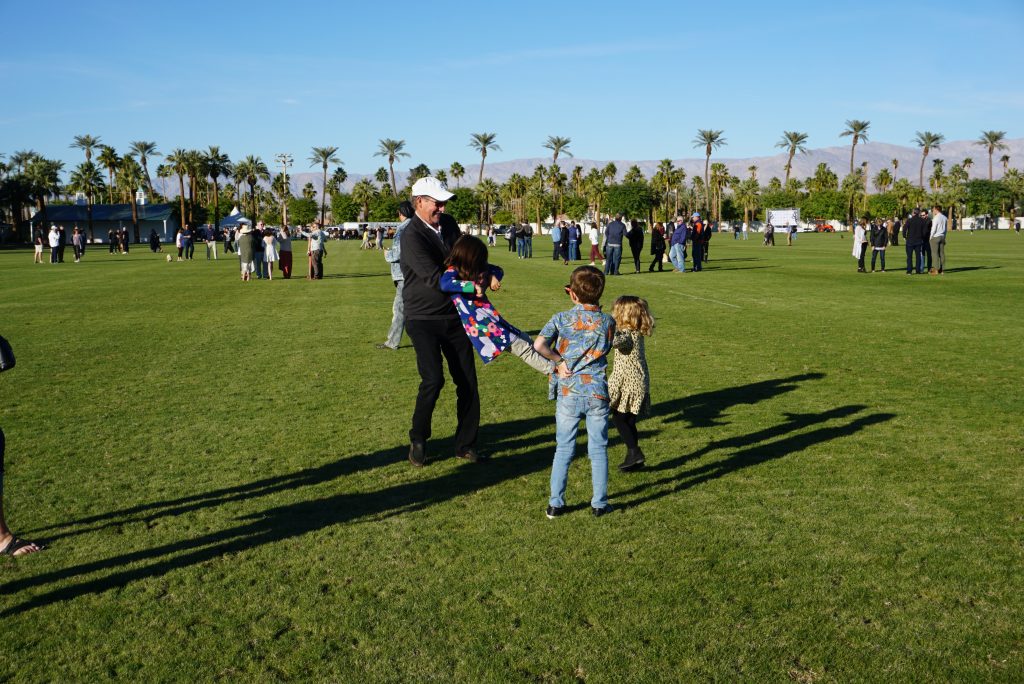 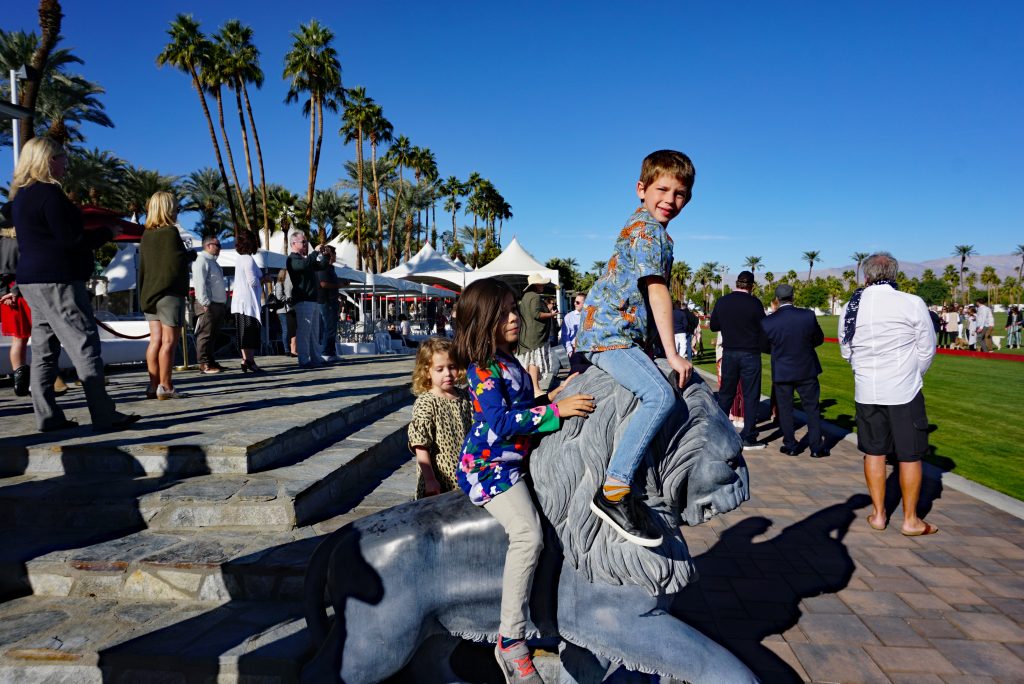 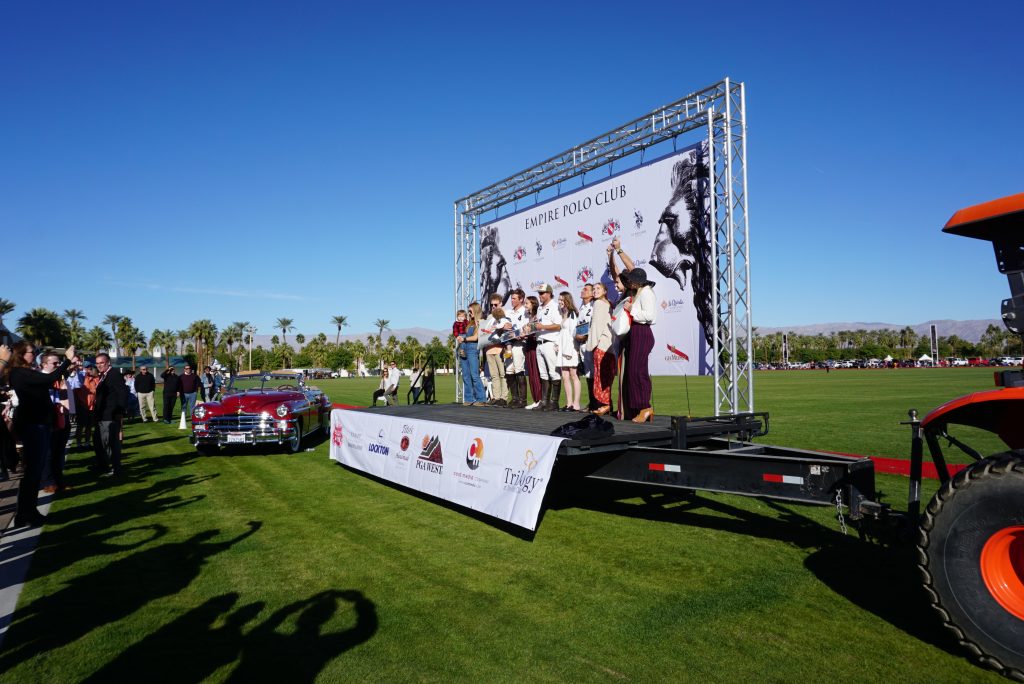 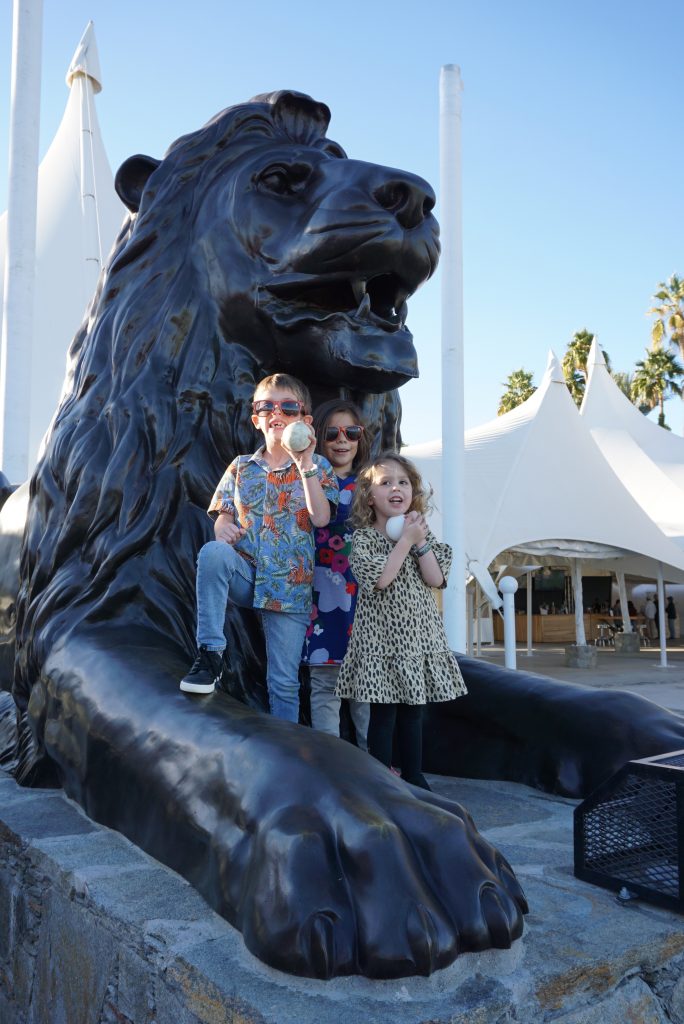 One of the team owners gave the kids polo balls... 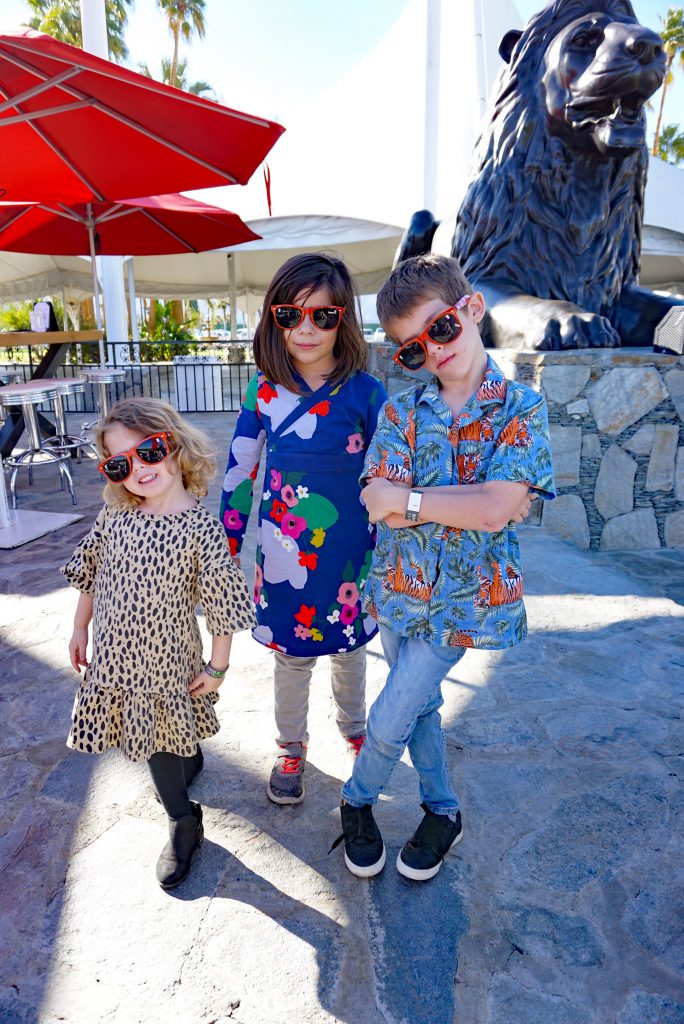 ...and the lady in the gift shop gave the kids Empire Polo Club sunglasses!

After the matches, everyone came back to our campsite for another epic showdown - a football game between the Washington Redskins and the LA Rams! What? You didn't notice this game on your NFL schedule? Nope, it was a very special game. One player on each team: Leo v Rina!

While Dave and I gave Kevin and Mike a quick golf-cart tour of the RV park (odd as they have previously stayed at our house in Portland, yet never seen our place in Indio), the kids set-up folding chairs in the empty campsite next-door, and a platter (LEGO box lid) of FREE SNACKS for the spectators (Lisa and me). We had hand-drawn tickets and programs. Time for kick-off! 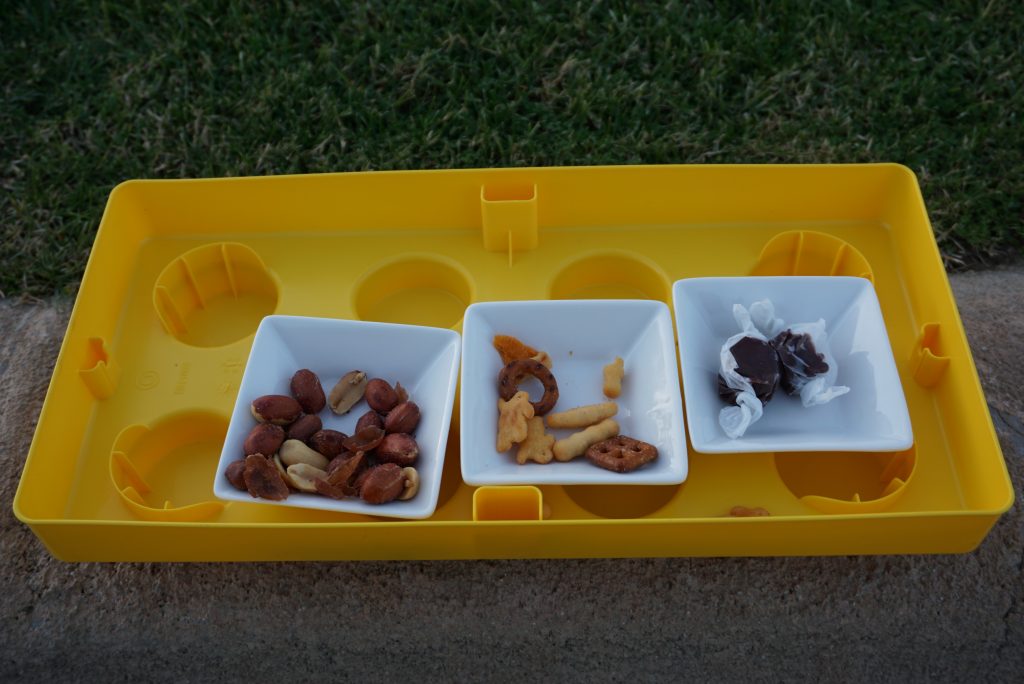 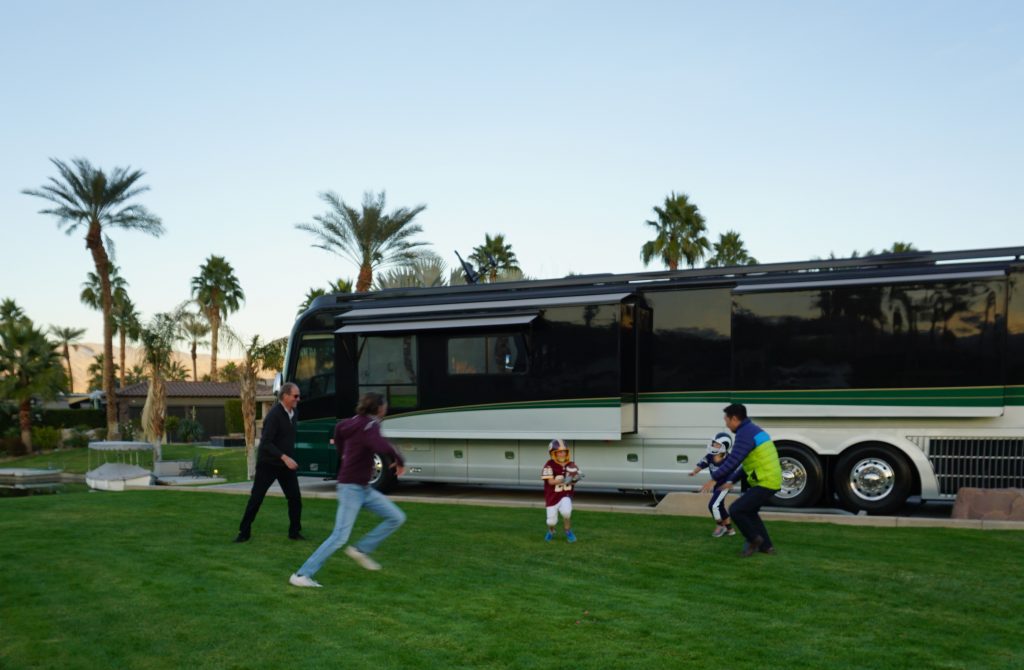 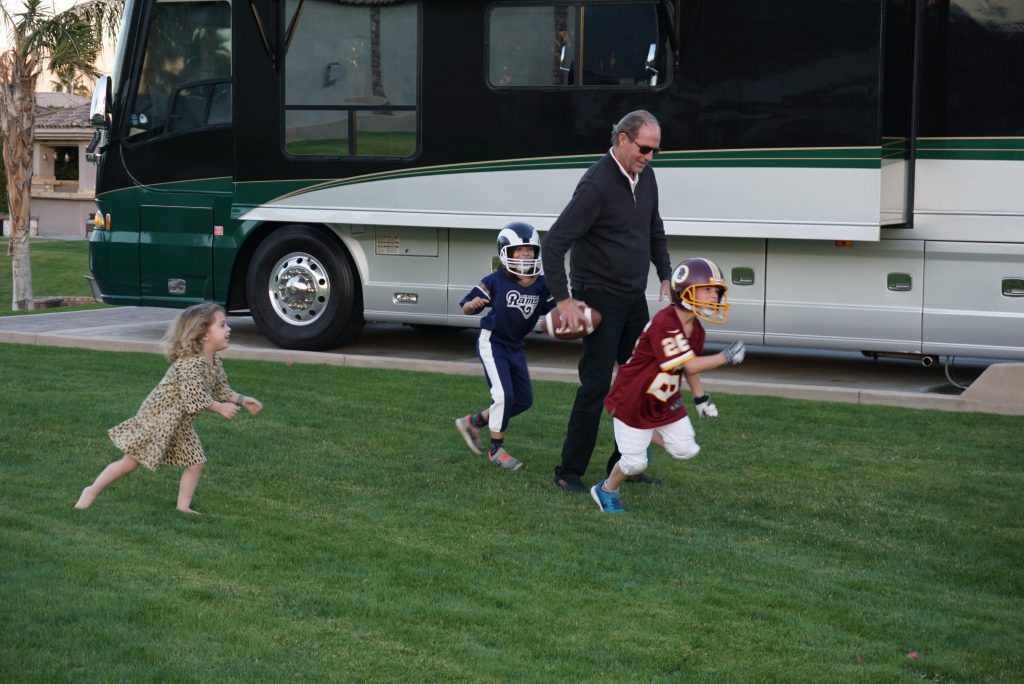 Lucy played as well. Not determined which team she plays for.

The Kennedy's playing football on the lawn of Hyannis Port, we are not, but we had a lot of fun and the kids had a lot of exercise. No one won. No one lost. Every "team" scored multiple times. After a while, we all went to dinner at the clubhouse and the kids posed on the ram statues at the entrance - with the glasses they made with Wikki Stix. 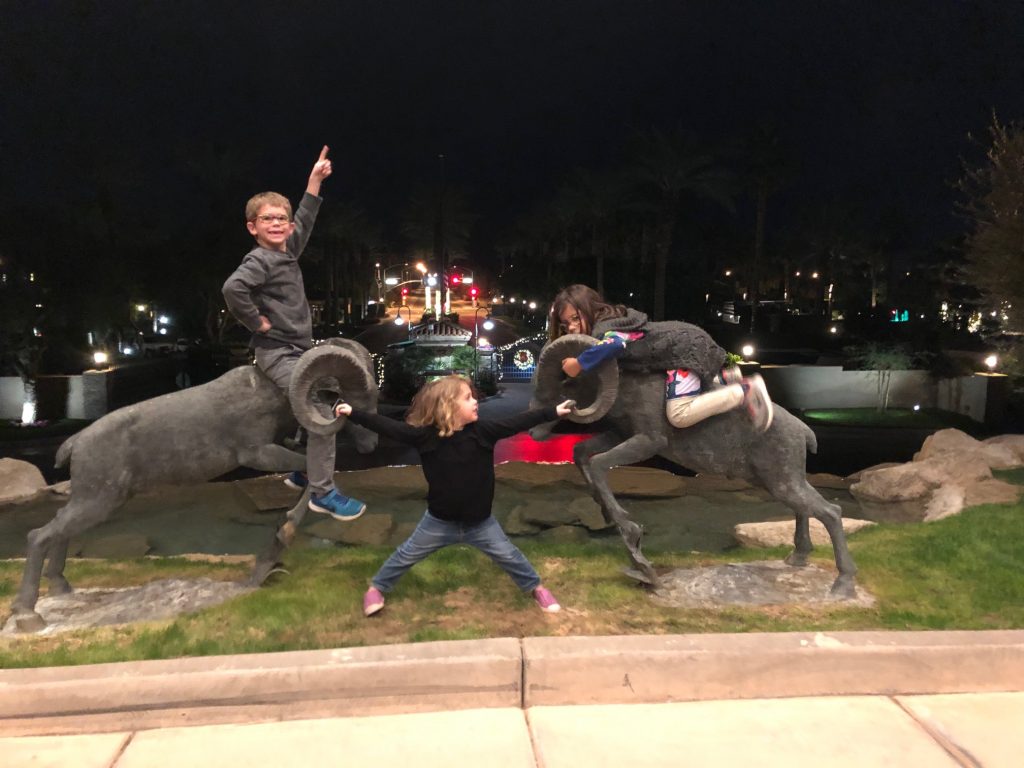 Monday, the Oregon Ducks actually won a bowl game! Okay, the final score was 7-6 (v Michigan State), but a victory is a victory. More snacks were served during the Red Box Bowl. 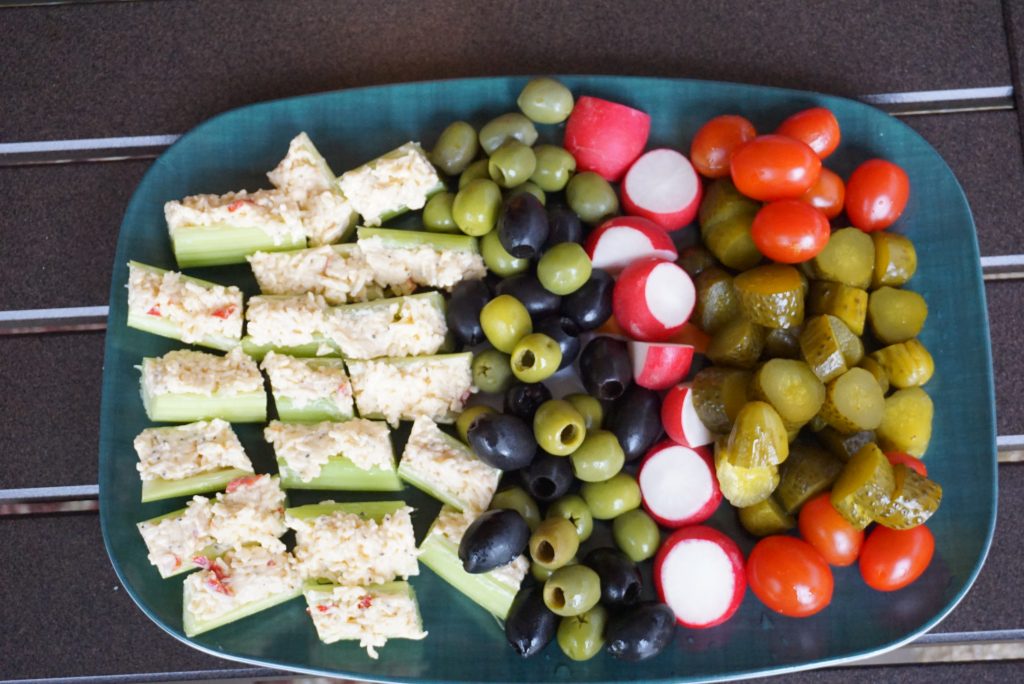 Dave and the grandkids decorated the casita with streamers, hats, blowers, horns, tiaras and any other sort of Made-in-China junk that we had in the New Year box. I made our traditional Fettuccini Alfredo dinner, we had a BINGO tournament, then played dominos while waiting for the ball to drop from Times Square.

At nine o'clock, it is magically midnight in Indio too... and will be until Leo learns to tell time. 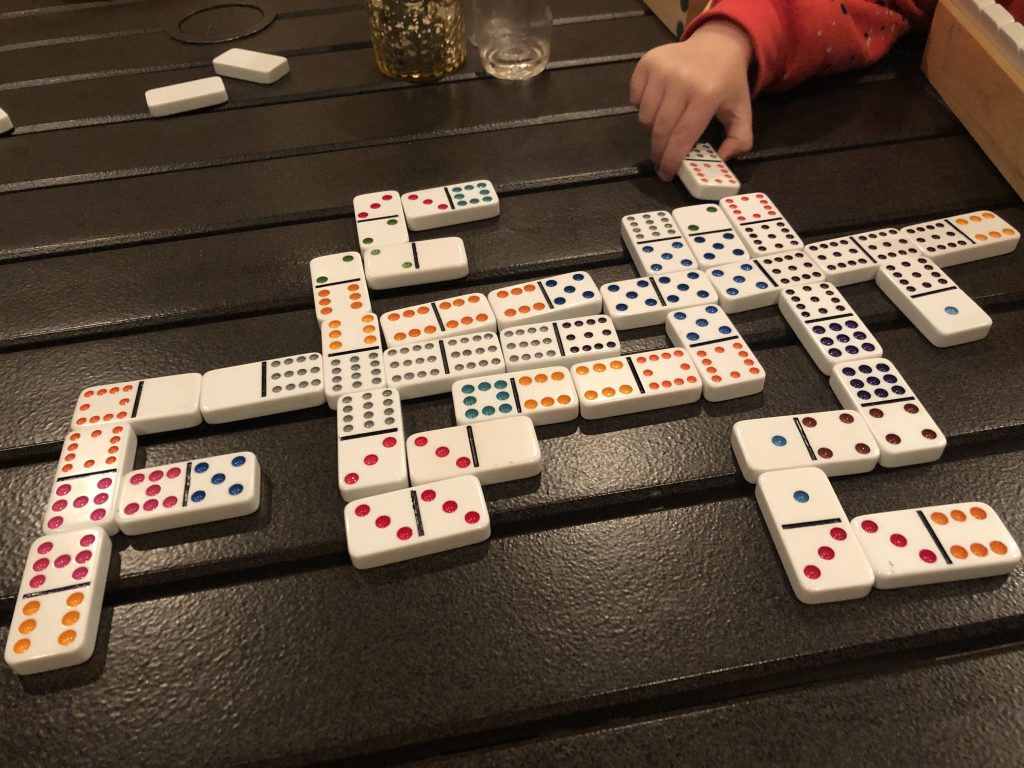 And this is how we will play dominoes until Lucy can understand actually rules.

We had a great weekend with our family and was just the tonic My Driver needed after losing his mother two weeks ago.

From our RV to yours - Happy New Year and Best Wishes for a fantastic, healthy, fun-and-travel-filled 2019!

Until my next update, I remain, your new year correspondent.

« Sad News Strike On, Strike Off »